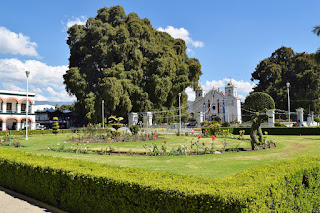 We took a short drive down the road to see the Tule tree, or El Arbol de Tule. It is said to have the stoutest tree trunk in the world. In 2001 it was placed on a UNESCO tentative list of World Heritage Sites. In 2005, its trunk had a circumference of 137.8 ft and a diameter of 46.1 ft. However, the trunk is heavily buttressed so the diameter of the smoothed out trunk is 30.8 ft. Not sure what that means but it's still slightly larger than the tree named General Sherman in Sequoia National Park which has a diameter of 29.5 ft. Whatever, it's a pretty big tree. 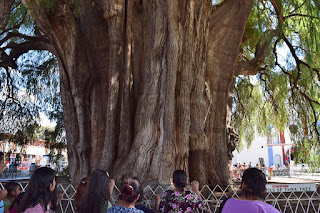 The tree is so large that it was originally thought to be multiple trees, but DNA tests prove it's one tree.The age is unknown, with estimates ranging between 1,200 and 3,000 years, and even one claim of 6,000 years. The best scientific estimate based on growth rates is 1,433-1,600 years.

The tree is occasionally nicknamed the "Tree of Life" from the images of animals that are reputedly visible in the tree's gnarled trunk. As part of an official project local schoolchildren give tourists a tour of the tree and point out shapes of creatures on the trunk, including jaguars and elephants. We missed out on that tour, probably because school was out for the holidays. 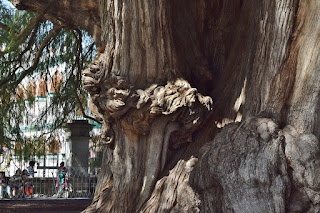 There is a church next to the tree that we called 'The Crayola Church.' In addition to being colorful, it looks like there are crayons going up the front facade. 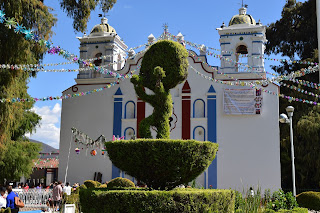 The garden areas near the tree and church are full of interesting topiaries, mostly animals. 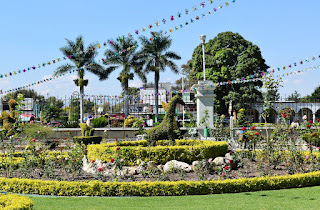 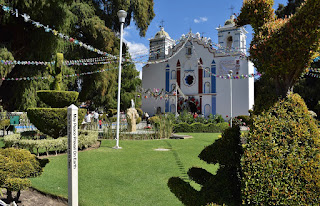