Winter in Arizona - Some Highlights

It's been a long time since we've spent the winter in Arizona. Our hope was to sell our house but we didn't get an offer that we liked so we'll keep it for now and that's okay. We missed spending the winter in Mexico, but if all goes well we'll return next year.
We spent most of December getting things ready around the house. Once it was on the market we were able to relax a bit. Some of our winter highlights below - cars seemed to be a major theme in January and February. 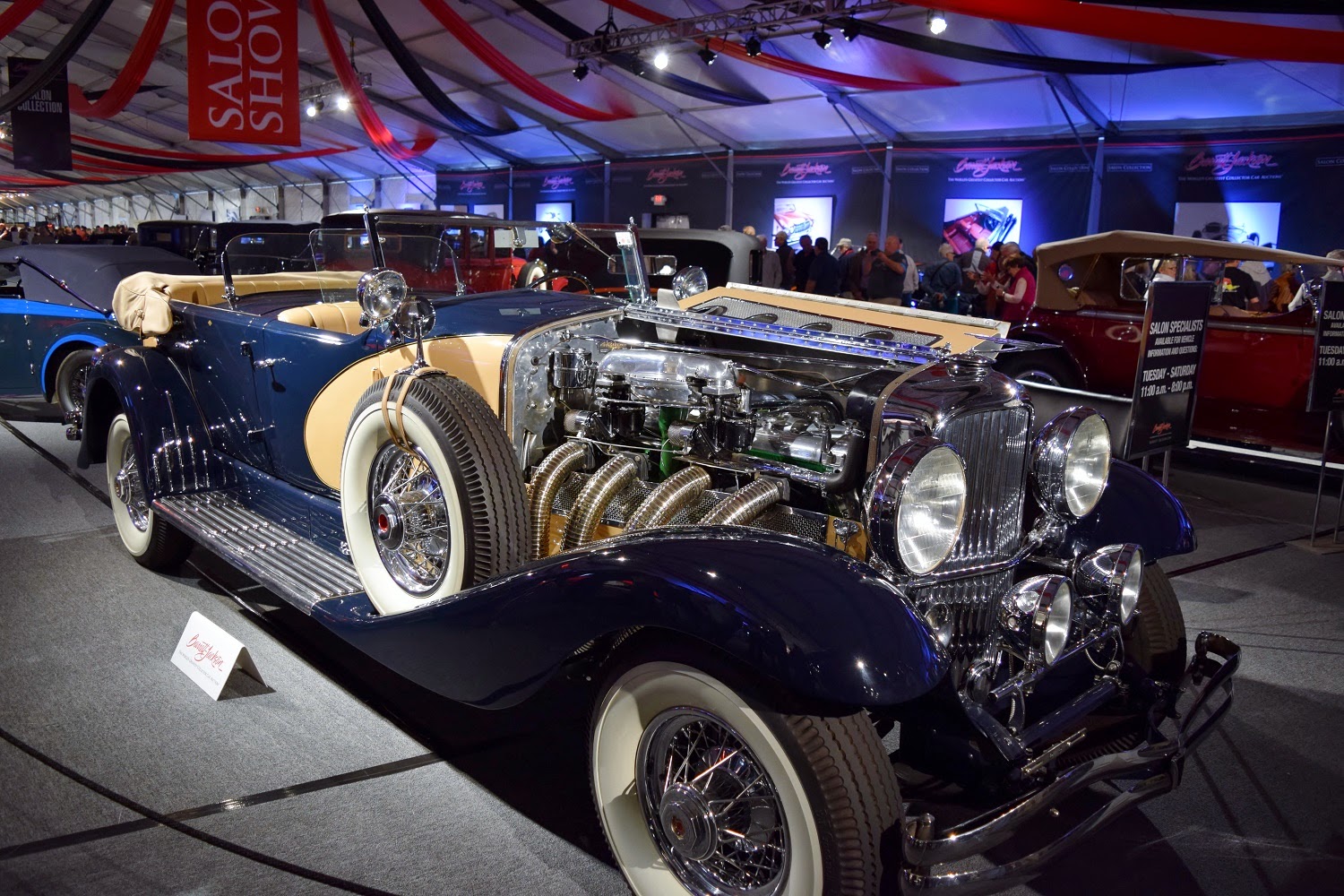 The Barrett Jackson Auction http://www.barrett-jackson.com/ is one of the largest in the world, selling more cars than any other auction. In addition to classic and antique cars they also sell some unusual items such as cars, airplanes and boats (several years ago they sold the boat from the TV show Miami Vice, complete with machine guns). There are literally acres of cars and it's pretty overwhelming. We had been to the auction in Scottsdale several years ago and we decided to go again. We went on a rainy day so there were more people inside the huge tent, more cars, and more vendors. It was a bit crazy and has grown much larger since the first time we went. I'm sure Brian could do a more thorough and interesting job of describing the cars, but I just went to look and these are some of my favorites.
This Cobra sold for over $5 million. 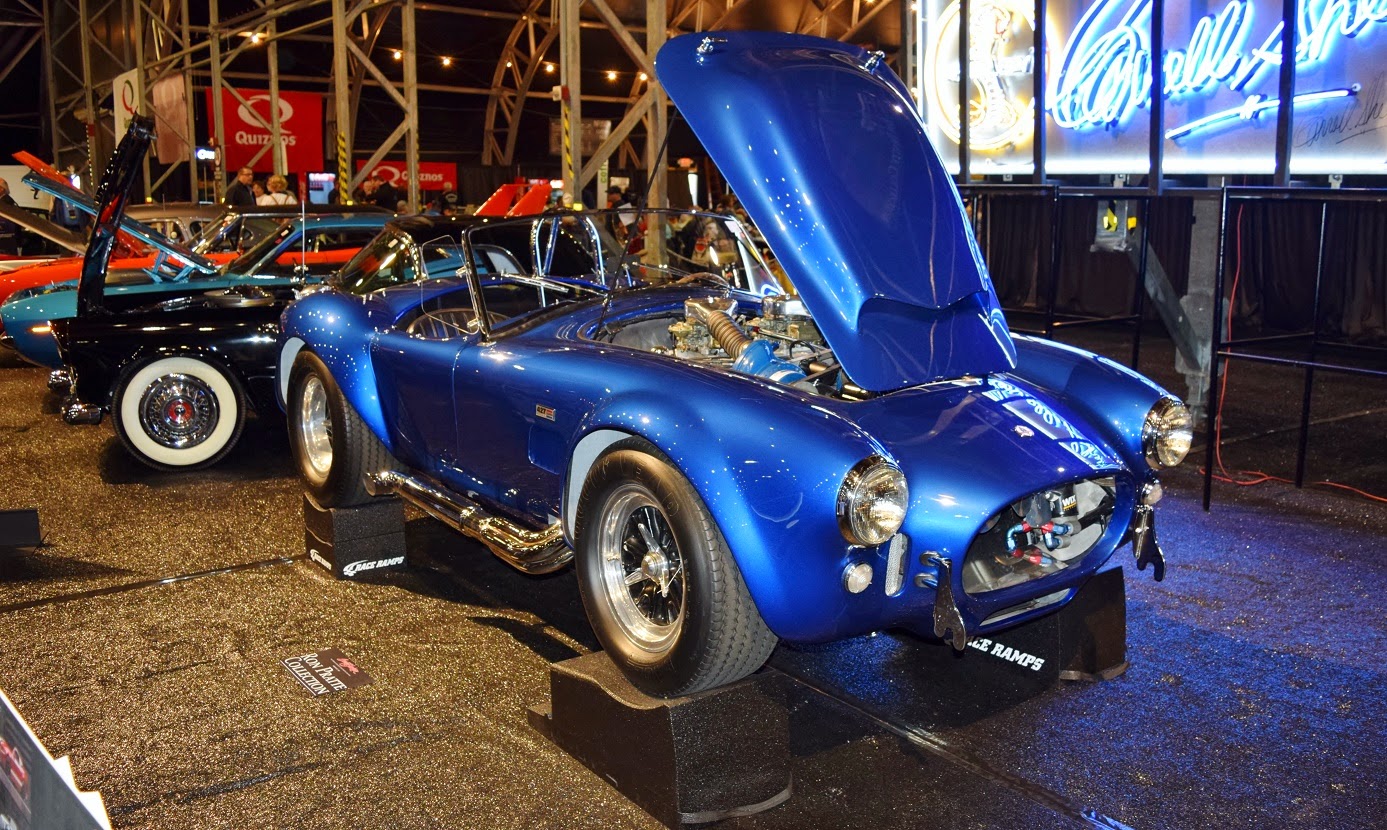 Brian had a car like this 62 Cadillac, only his was midnight blue. Love the fins. 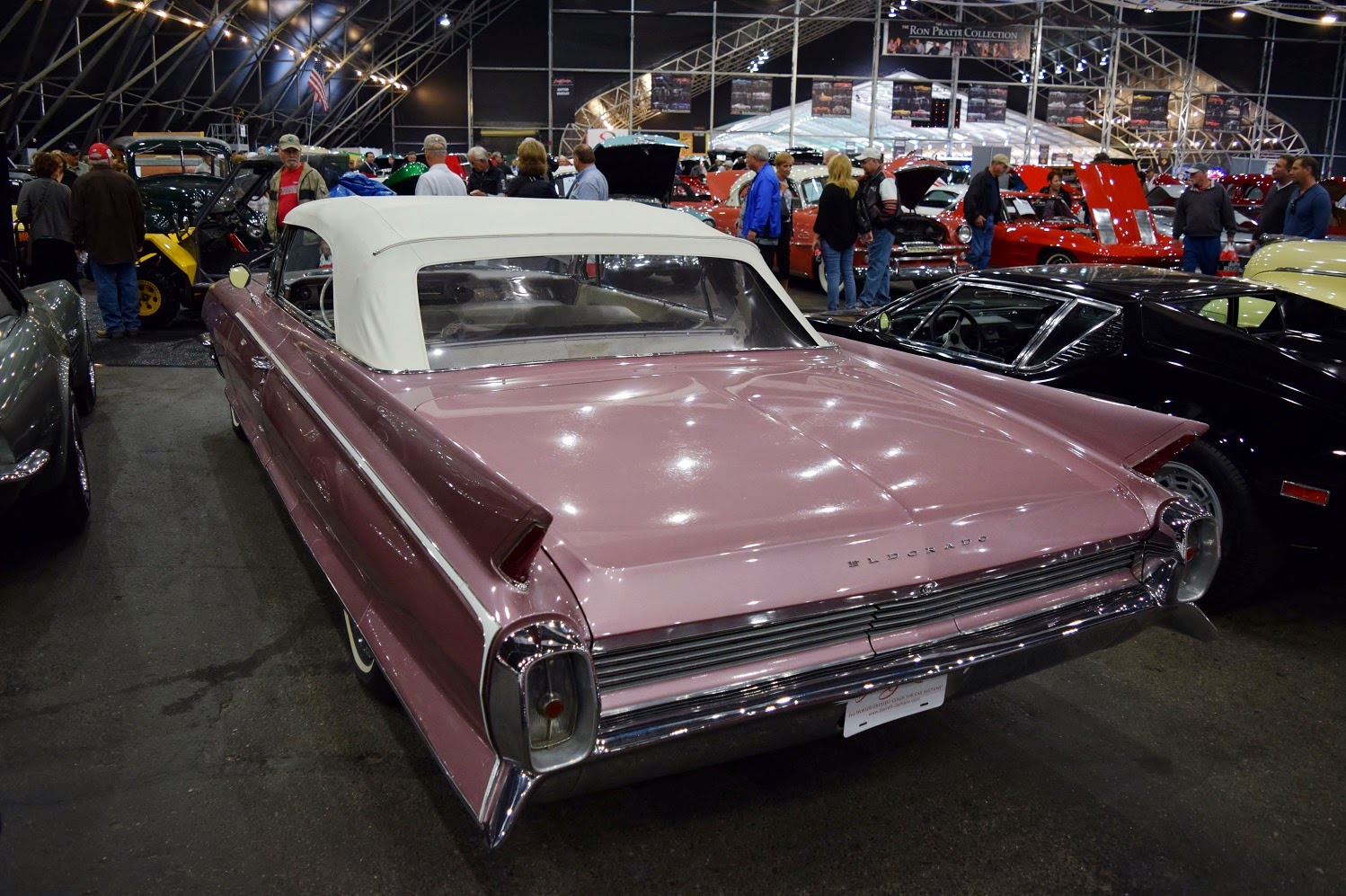 This car is a Blastolene, very strange looking. I don't think we'll see one on the street anywhere. 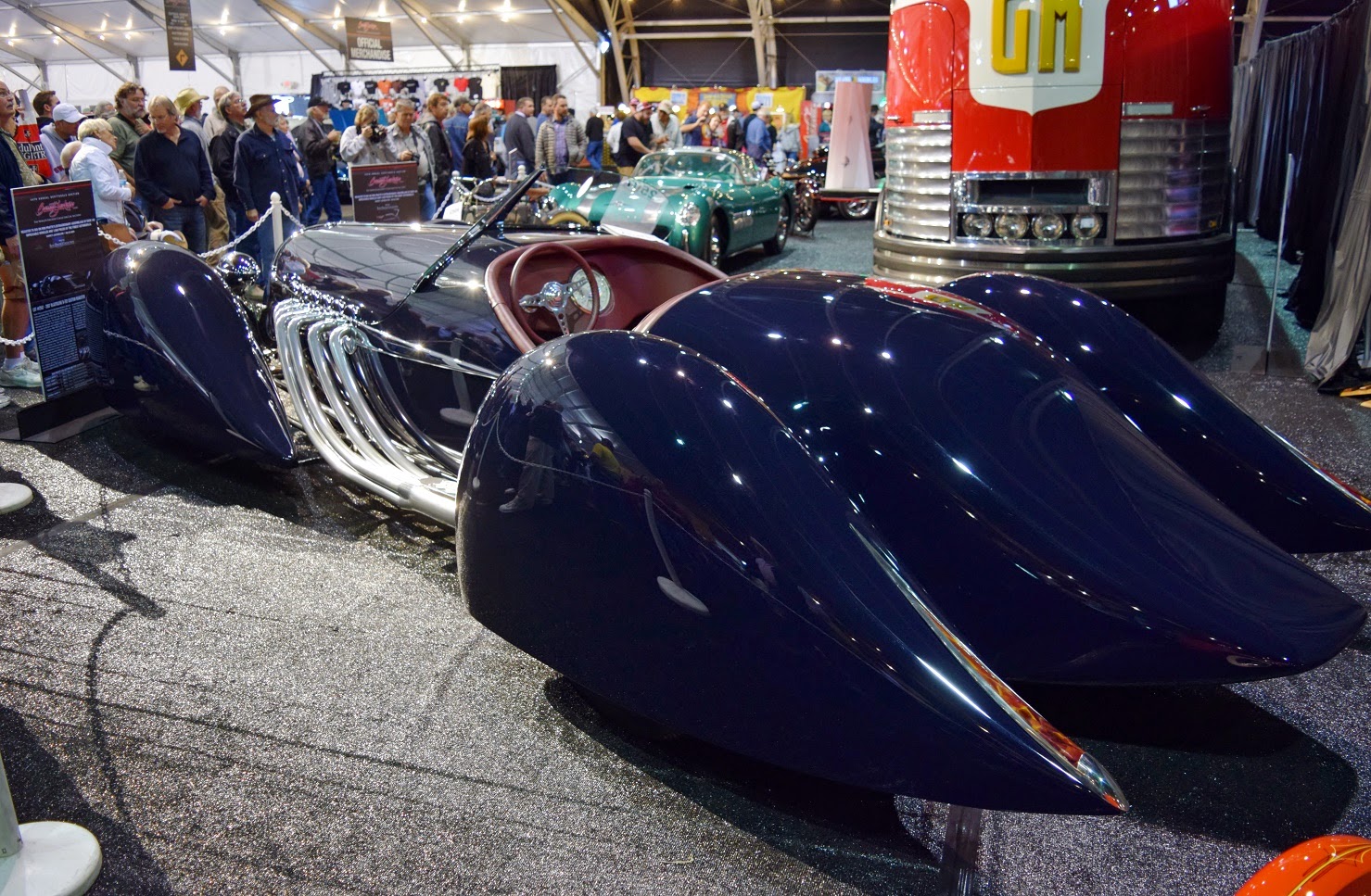 This is a 57 Ford and it was cool to watch how the top went into the trunk. 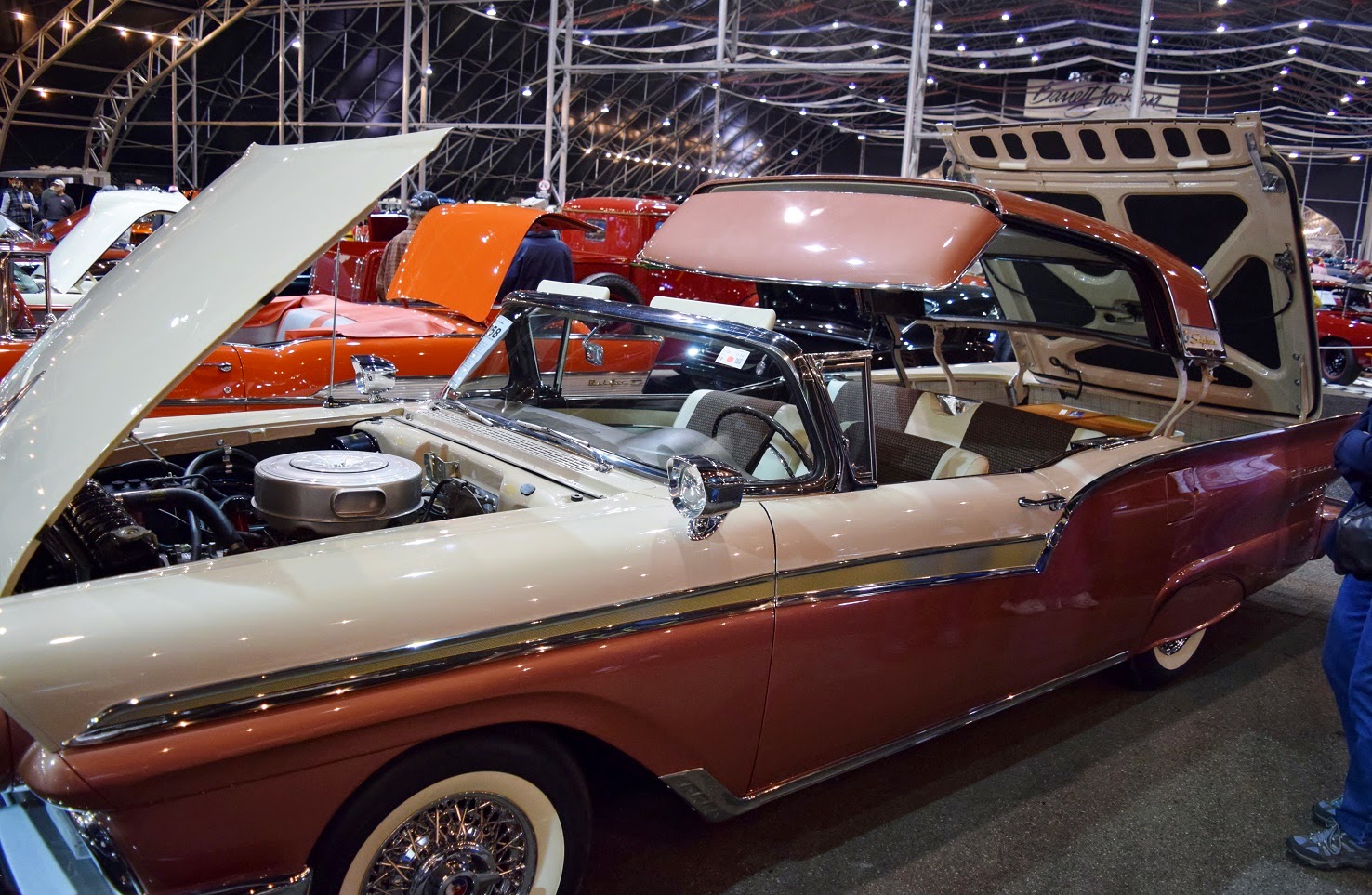 There was event in Fountain Hills called the Concours. Obviously not as big as Barrett Jackson, but a fun event along the lake shore.

This car is an Auburn and was quite impressive. 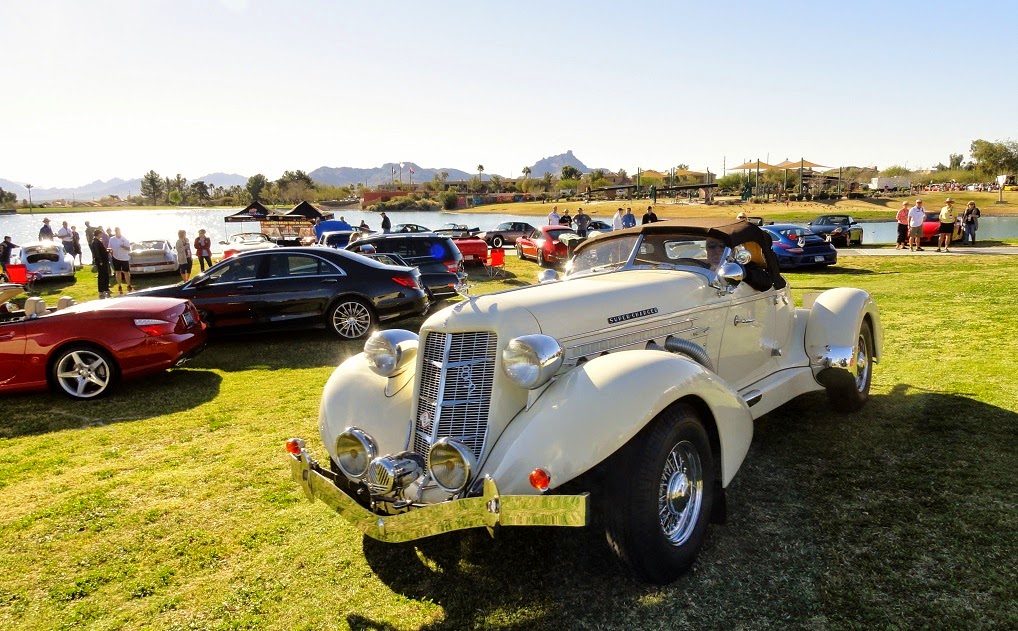 There were lots of expensive cars, many shown by dealers. Rows of McClarens, Porsches, Ferraris and so on. I picked out a nice little Lamborghini but I don't think I could even afford the insurance on it. 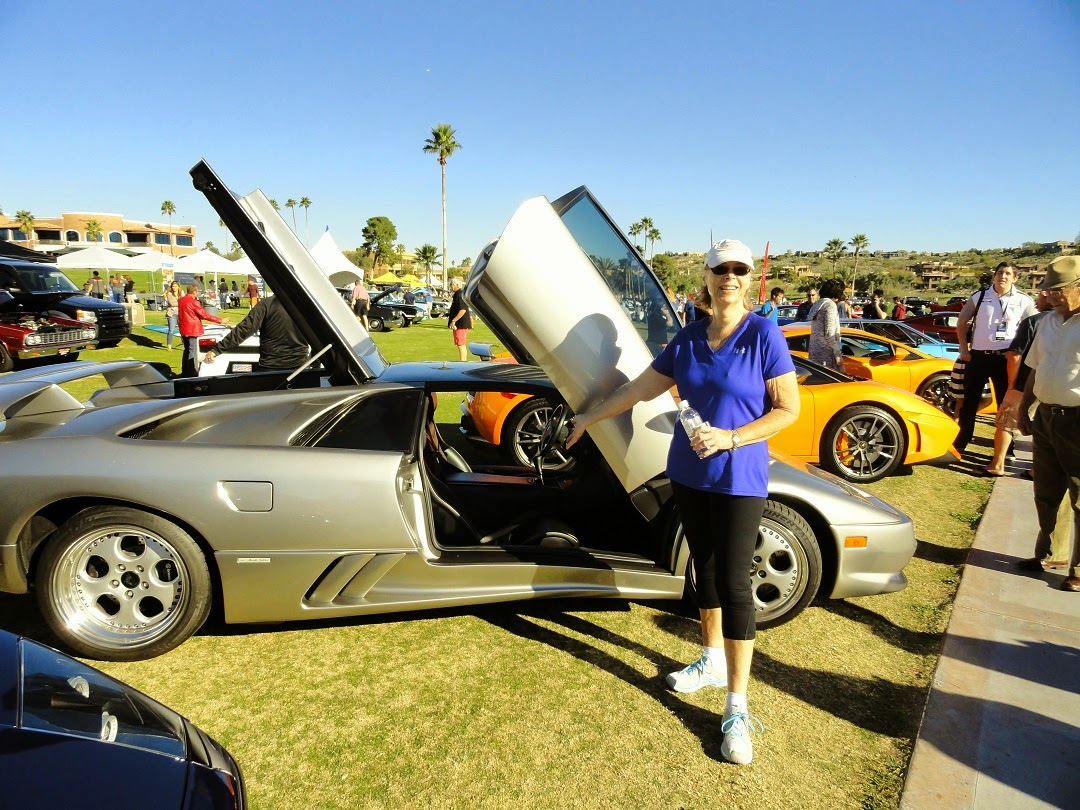 All the car shows made us want to travel again so we took a couple of small trips. We both needed some dental work done so we took the Bus down to Yuma and walked over the border into Los Algodones. There were too many dental clinics and optical places to count. We chose one called Sani Dental on the recommendation of friends and were very pleased. Quality work and so much less expensive. It was unlike any of the places we've been in Mexico but the town seems to be there pretty much for tourists. We stood in line for about an hour and a half to clear customs and get back across the border. Lots and lots of people who had crossed over for the day.

When we got an invitation to a birthday party in Santa Barbara last month we jumped at the chance to see our friends Kathy and Dan and spend some time with them in California. It was Dan's 60th (he's a bit behind us) and from previous experience we know they know how to throw a party. We had a super time with them the two of them and their fun friends. The weather was great and it was nice to get away.

Those are the big events of our winter here. We've gotten into the routine of walking around Fountain Park every day, although Tilly doesn't go with us very often since she has a tough time making it all the way around. We enjoy getting together with friends in the area and I have continued my weekly shopping/lunch day with Judy. Brian has done a few projects on the Bus but not as many as previous years. We've seen some movies and done a lot of reading, and I'm starting to get bored. Time to hit the road. We hope to leave around May 1 and head towards Colorado (not sure of which route). We have to renew our driver's licenses in South Dakota, then will visit my family in Minnesota. After that we'll head for the East Coast and work our way down the coast. No set agenda as usual, other than stopping to see friends and family.
Posted by Sue and Brian at 6:06 PM 3 comments: