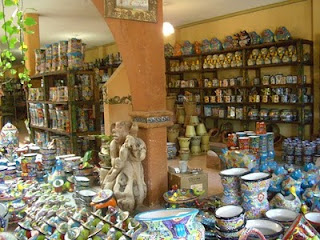 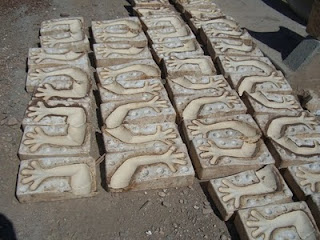 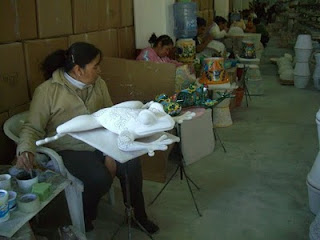 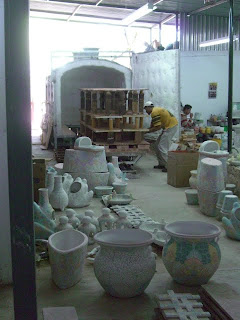 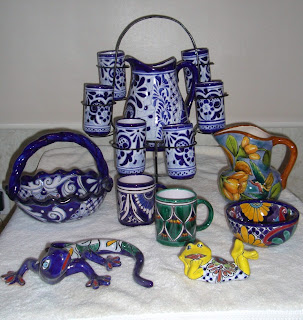 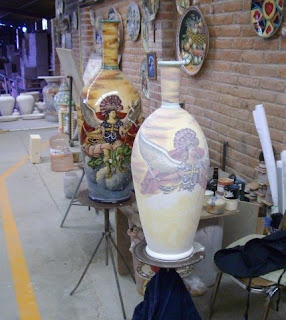 We also went to a town between DH and Guanajuato called Santa Rosa which is known for its Mayolica pottery. The pots are hand made on a wheel and then fired twice but are different in their coloring and style. The pitcher to the right in the above array and the pots directly above are Mayolica and have a different appearance than the Talavera. They have much more elaborate paintings.
Additonal info and pictures regarding Talavera can be found on these websites if interested….
http://www.mexicanconnexion.com/
http://www.inside-mexico.com/art1
http://en.wikipedia.org/wiki/Talavera
http://www.directfrommexico.com/talavera-history.html
Posted by Sue and Brian at 3:44 PM No comments: 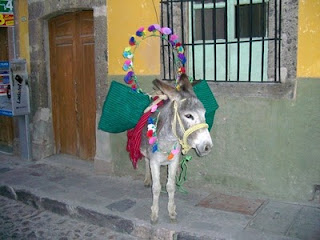 We had a long travel day getting to SMA but it’s great to be back in this beautiful city. Brian’s Aunt Mary moved here in the 1950s and he has been coming here since the ‘70s. Lots of changes but still a fascinating place to be. 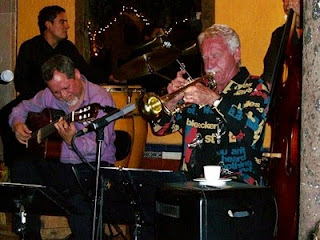 Sometimes amazing things happen. We went out to dinner in San Miguel de Allende to a place we knew Doc Severinsen would be playing (he lives here now and plays almost every week). Maybe you remember Doc from the Tonight Show with Johnny Carson where Doc led the band/orchestra for 25 years? All we can say is what a night and what a band and what amazing music. They just blew us away. Something very special. Very different. Very unusual. 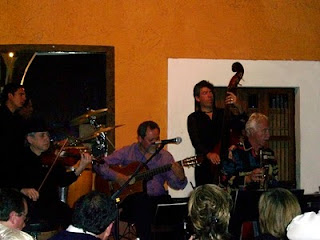 Gil Gutierrez and Pedro Cartas are working hard to keep Doc young (Doc will be 83 in July and still has the chops). Gil on guitar and Cartas on violin. There is also a percussionist named Miguel Favero and bassist Gilberto Gonzalez. All very talented musicians – and that is an understatement. These guys just floored us. Make no mistake, Doc may be the name celebrity in the group but these guys would be worth it even if Doc were not there. One of the best nights of music ever. Their sound is unique. It could be worth a trip to San Miguel just to get to see them. But it you live in MN you won’t have to as they will be there in February.

We had dinner with appetizers and drinks with all the music the total night out cost for both of us with tips included was about $56. Cover was 300 pesos minimum applied to drinks and dinner.

Check out the various websites below to learn more – be sure to click around the websites.

We spent a few days in Zacatecas, which was once the world’s largest silver producing city. There are still many working mines and the city is built on and among the mountains containing the mines. We were both surprised at how large the city is. 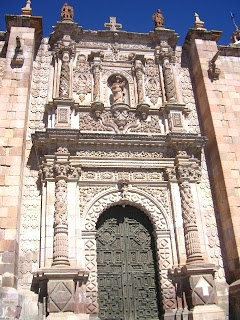 One of the most attractive and well-known features of Zacatecas is its buildings which are built from the local pink sandstone. Much of the architecture is in a very elaborate Mexican baroque style, especially the cathedrals which are very ornate. 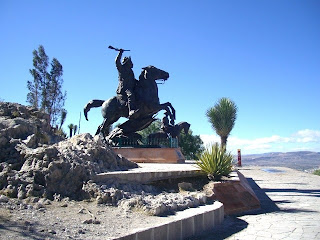 We decided to take a tour of the city so that we could learn its history as well as see some of the highlights. We began our tour at the Bufa, which is the top of a hill overlooking the city. There we learned about a famous battle that turned the tide for the Mexican Revolution, thanks to Pancho Villa. There is also a chapel on the Bufa which is famous for the pilgrimages that go there. According to our guide there are 2 million people in the U.S from Z – hard to believe - and they make the yearly pilgrimage with the Mexicans. Evidently so many come that they are assigned days according to their profession. Taxi drivers one day, teachers one day, mechanics one day and so on. 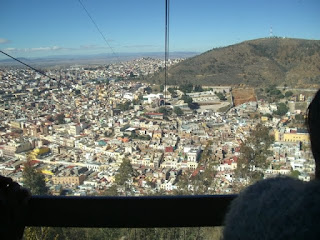 After touring the Bufa we took a cable car down the mountain to the Mina Eden, or Eden Mine. Great view of the city below and not as scary as I had anticipated.
The mine was pretty interesting. It’s set up with figures showing how the miners had to work when the mine was open. Mostly they were Indians who were enslaved by the Spanish. It was easy to imagine what a horrendous and risky existence they had in the mines. But, times change and now there’s a nightclub in addition to the restored levels of the mine that we saw on our tour. 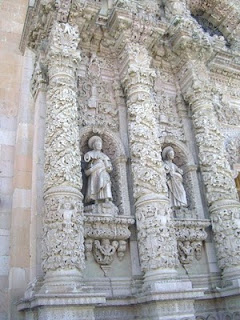 Following the mine tour we visited the Cathedral and learned its history. The front of the cathedral has an incredible amount of detail and each one is there for a reason and has a special meaning. Following the tour we had lunch and walked around the city until we could walk no more.
Posted by Sue and Brian at 11:19 AM No comments:

Finally on the Road, Mata Ortiz

After a few delays we crossed the border in Palomas, Mexico without incident. We had a very smooth trip from there to Nuevo Casas Grandes, our first stop. We were able to boondock at Pistoleros which is a restaurant/rodeo grounds/old hacienda. Very safe there and all the owners asked was that we have a meal or two at their restaurant which was easy to do and the food was good. We made a day trip down to Mata Ortiz which is famous for its pottery. Juan Quezada of Mata Ortiz is very well known for his art and has involved the village in producing some very unique pottery. Here is a link to Juan Quezada http://www.mataortiz.com/mata/mata10.htm 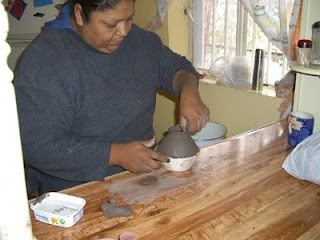 The pottery in Juan's gallery was beyond our price range, but we were able to buy a variety of pieces from the local potters at very reasonable prices. The poverty in the village is heartbreaking and it was difficult not to buy something from everyone we saw. From the moment we entered the village we had people showing us their pots and inviting us into their homes. They were very proud to demonstrate their skills and have us take some pictures.  Double click on the pics to enlarge. 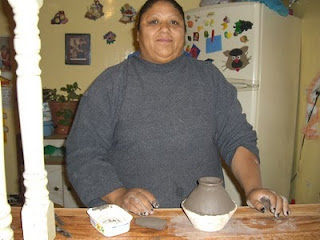 We were shown how the clay is molded, without a potters wheel, and then shaped into a pot. Following that the pot is painted and then fired. In this instance, an old washing machine tub was placed over the pot and the fire was built around it. They use wood for the initial heat and then add cowchips to make the fire last longer. 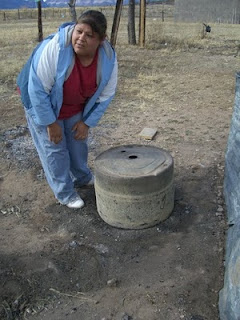 The variety of styles and quality of the work were amazing. All of the bad publicity about Mexico is keeping the tourists away and really impacting the people in Mata Ortiz. Truly a shame as these are some very talented artisans. We tried to buy pieces that were representative of the many styles we saw. 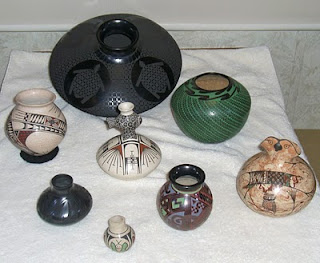 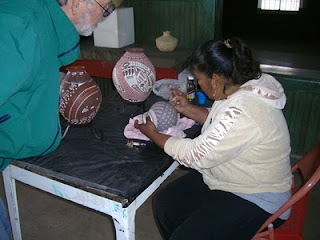 The roads so far have been good for the most part. I took a few shots along the way. We passed through a vast area of what seem to be Joshua trees - very cool.

Posted by Sue and Brian at 4:13 PM No comments:

We're getting started later than we had hoped this year so we've been able to experience a bit of deep freeze along with the rest of the U.S. Definitely a motivating factor to head south. This year we hope to explore colonial Mexico. Our intent is to cross at Palomas, Mexico and work our way towards Guadalajara and then over to the west coast. We're excited to get started and will update the blog when we have wifi.
Posted by Sue and Brian at 5:30 PM No comments: