LA, Chuck and the Beaters 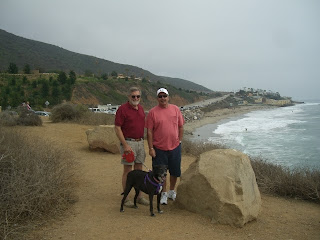 Whenever we get near SoCal we always find a way to visit with Brian’s long-time friend Chuck Fiore. He's a great tour guide and we have a lot of fun checking out the area. This year we made our usual pilgrimage to Neptune's Net in Malibu for some great seafood. Afterwards we walked across the PCH to watch the surfers.
Brian and Chuck have known each other since high school, although they went to different schools in the neighboring towns of Mamaroneck and Harrison in Westchester County, NY. When Brian left NY and moved to Colorado in the '70s Chuck visited a few times before moving to California. Over the years Chuck would pass through Colorado from time to time while touring with bands from Phoebe Snow to John Denver – including Nicolette Larson, Jelly (Amy Madigan), Bernie Leadon (Eagles) among many others.

Sometimes, if timing works out, we get to see Chuck play with a band he helped put together over 30 years ago, Billy & The Beaters. This trip we got to see them play to a SRO crowd at Yoli’s in Ventura. Kathy and Dan drove down from Santa Barbara and we had a fantastic evening of great music. The Beaters had a #1 hit song in the mid-80s with “At This Moment” and Billy Vera has been writing and performing hits since the 60s. Ron Viola, one of The Beaters’ 4 sax players, is also from Harrison where he and Brian were acquainted. To learn more click on the following link  billyvera.com
When Brian hit the road as a tractor trailer driver in the '80s he would get to visit Chuck in SoCal several times a year when The Beaters were playing a special midnight show every Monday at the world famous Troubadour. They were known as “the baddest band on any stand” as they still are to this day. After over 30 years this band can still blow the doors off any place they play.
Posted by Sue and Brian at 4:53 PM No comments: