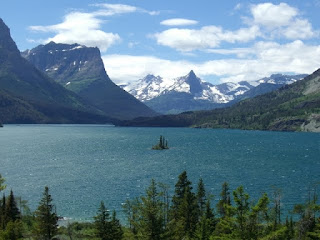 Wow! We have wanted to visit Glacier for many years and feel very fortunate to have finally made it.

We approached Glacier from the east and drove along the Flathead River, where we caught our first glimpse of the incredible turquoise water seen in the rivers and lakes in this area. We were able to find a pullout big enough for the Bus, and got out to watch the rafters and kayakers coming down the river. It looked like a really fun float with a few rapids thrown in. 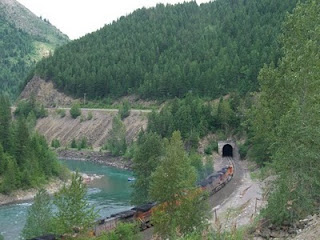 On our first car trip into the park we took the Going to the Sun Road, which is one of the world's most spectacular highways. Bisecting the heart of Glacier, the 50 mile long road follows the shores of the two largest lakes in the park and hugs the cliffs below the Continental Divide as it goes over Logan Pass. The road is undergoing a 10 year rebuild, but is still open. The drive and stops along the way left us pretty speechless - it's easiest just to share some of the pictures taken along the way. Don't forget you can click on any picture to enlarge. 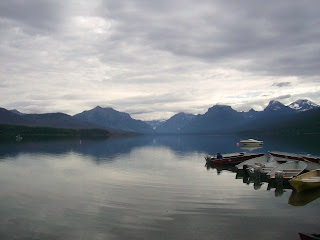 McDonald Lake in the morning when it was a bit overcast. 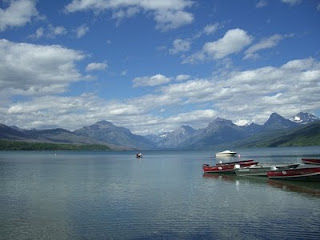 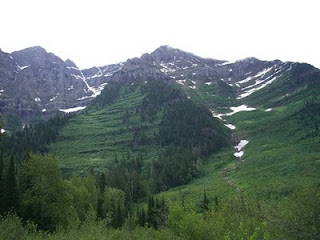 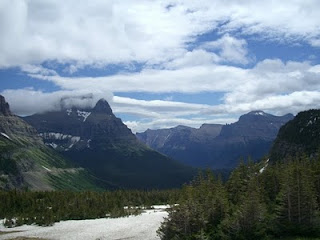 Logan Pass didn't open until June 17 because of all the snow. One of the rangers told us they had to dig through a 78 foot drift to open the Visitors Center. 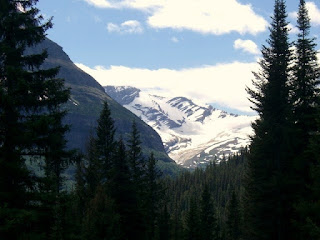 Jackson Glacier is one of the few remaining glaciers  in the park today. It has been estimated that there were approximately 150 glaciers present in 1850, and most glaciers were still present in 1910 when the park was established. In 2010, it is believed that there are only 25 glaciers larger than 25 acres remaining in GNP. A computer-based climate model predicts that some of the park’s largest glaciers will vanish by 2030. It's a strikingly clear effect of global warming. 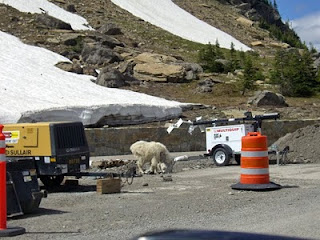 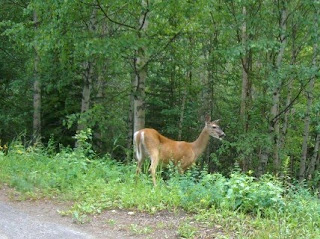 A mountain goat and her baby are unaffected by the work on Going to the Sun Road. We were also very close to a young buck standing in the middle of a construction area, totally ignoring both workers and people in cars. I was too astounded to get a picture but we saw more deer along the way. 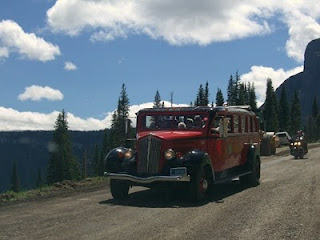 Glacier is the first park where we have seen tour cars carrying so many tourists. They are owned by a private company and we saw too many to count. It seems to be a great way to see the park, as well as keeping the amount of emissions in the park down. There were also shuttle buses, which we have seen in other parks, but this seems to be a more interesting way to tour. 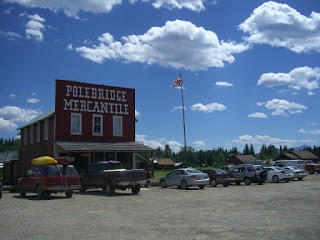 One day in the park wasn't enough so we came back for more. On one of our adventures we took a side road which winds in and out of the park to a little place called Polebridge which is really in the middle of nowhere. It has a restaurant and general store that sells awesome baked goods. They seemed to be doing a pretty good business. 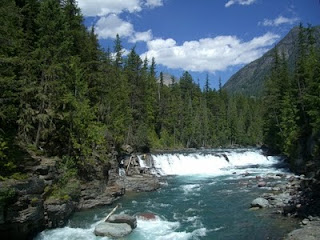 Glacier is a magnificent park and is definitely one of our favorites. Hopefully we'll return one day.
Posted by Sue and Brian at 5:27 PM No comments:

Wind Energy and an Oil Boom

For lack of a better word, we are 'fascinated' by wind energy. As we travel we see large wind farms in many states. Wind generators are going up all over the country. Every day more electricity is coming to us from the wind. Modern technology is producing wind generators capable of producing more and more energy. Many of the generators top out at between 300 to 400 feet above the ground. The towers go up 300 feet. The fiberglass blades are over 100 feet long. The generator on top of the tower is large enough for men to walk around inside. The largest generators can now produce up to 2.5 mega watts of power - one mega watt can power between 200 to 300 houses.
Of course Brian is always on the lookout for the trucks carrying the various componenets of the wind generators. We see them on the highways all over the country. Special trucks are needed. Some blades are over 100 feet long and require their own trailers. Each 100 foot section of the tower requires its own special trailer. Be aware that a normal big rig semi you might see out on the highway would have a total length of about 65 feet. The wind generatior parts are on a trailer that is about 120 feet long and then maybe another 20 feet for the tractor. The hub the blades attach to requires a special truck. The generator itself requires a special truck. All totaled it can take 17 special trucks to transport one wind generator to the wind farm  where it will be put together on a concrete base that takes over 45 mixer truck loads of concrete.
The whole wind energy industry is moving forward by leaps and bounds. We hope this industry lives up to its promise of providing economic efficient electricity to all of the US. If you want to know more about this, here are some links
http://www.awea.org/projects  National map of wind farms
http://www.atswes.com/   Trucks that haul wind generators with details and amazing pictures
http://www.gepower.com/businesses/ge_wind_energy/en/index.htm  GE wind site, lots of info
http://www.northernpower.com/  Wind generator manufacturer
http://www.energy.siemens.com/hg/en/power-generation/renewables/wind-power
http://www.youtube.com/watch?v=SOqSP2XTC6o  Video on building generator
http://www.desertskywind.com/project.htm  A wind farm in Texas
http://www.popsci.com/technology/article/2010-03/next-gen-wind-turbine What a wind generator is made of
http://www.windpoweringamerica.gov/wind_maps.asp  Wind in the US
Our travels recently took us to Williston, North Dakota where we we learned there is an oil boom going on. We were amazed when we were told that this is the largest oil field discovery in US history and there could be as much as twice the oil as in Alaska. Wells are being drilled everywhere and oil drilling equipment can be seen everywhere as well. Oil derricks are pumping and filling huge tanks with crude. Ranches and farmlands are now oil fields and it is said that every day there is another millionaire in ND (over 120 new millionaires in 2008 alone). Google Williston-Bakken-Oil North Dakota to learn more.
Posted by Sue and Brian at 5:01 PM No comments: 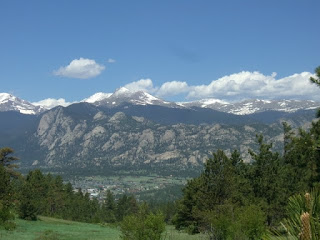 It's been at least 10 years since Brian and I have been to Rocky Mountain NP, one of the places we visited frequently when we lived in Colorado. It's as beautiful as ever and was truly delightful to visit again. It's definitely in the top 10 of our favorite parks. One of my most treasured views is of Estes Park when first coming over the hill.
As we entered the park we encountered a large group of elk, a common sight in the area, and a group of Rocky Mountain sheep grazing alongside them. Quite a sight to see. 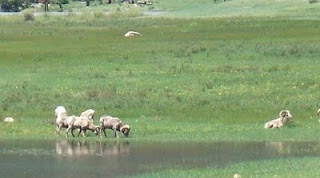 In spite of some fairly tall snowdrifts Trail Ridge Road was open. We tried to take it all in as we drove up but the majesty of the mountain ranges is overwhelming. I've always said that the sky in Colorado is the most unique shade of blue I've ever seen and it didn't disappoint. 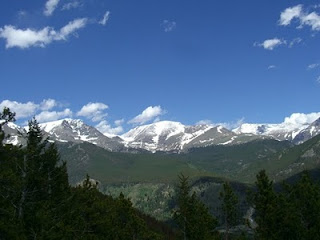 We stopped several times along the way just to let it all sink in, if that's possible. In the picture below I'm holding Tilly back from trying to catch a chipmunk. Not that she'd know what to do with it if she caught one. 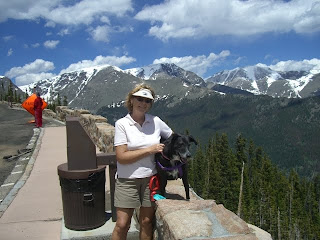 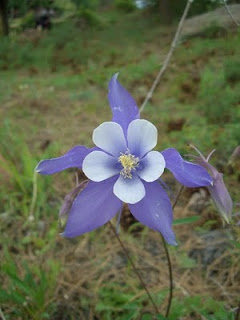 We had a truly marvelous day in one of our favorite spots. To cap it off, we found a Rocky Mountain Columbine, the state flower of Colorado.
Posted by Sue and Brian at 5:16 PM No comments: