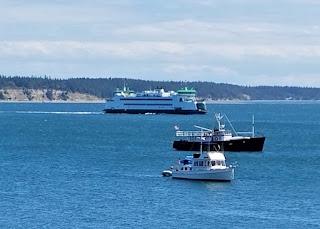 The ferry system in Washington state is pretty amazing. We had never taken the Bus and car on a ferry, so we decided it was time for a new adventure. By taking the ferry from Whidbey Island we saved ourselves about 120 miles and the stress of driving through Seattle/Tacoma traffic on the Friday of the 4th of July weekend. Great decision, it didn't cost much more than fuel would have by driving all the way around, and as an added bonus it was pretty fun.

We made reservations online so we lined up and paid at the toll booth in Coupeville. We weren't able to purchase tickets for the vehicles ahead of time online, but with our reservations it was no problem. 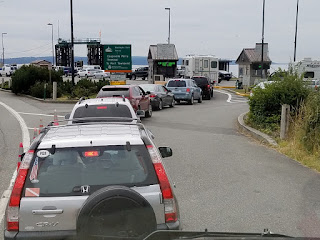 The Bus (check the OFF2SEE license plate) was put at the head of one of the lanes and was the first vehicle to load. I followed further back in the car. 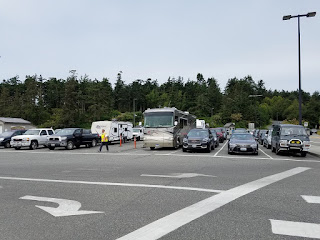 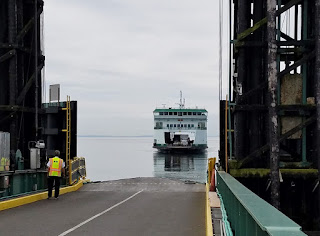 It wasn't unusual for an RV of our size to be on the ferry - we saw several semis unload as we were waiting our turn to load. 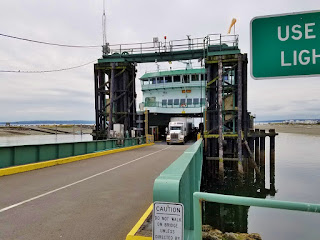 Since the Bus was first on we had a great view throughout our ride. 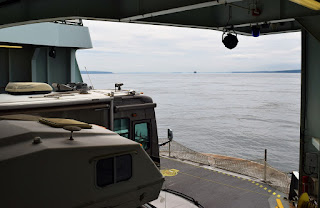 Fun to be sitting in our seats in the Bus as we went out to sea. Obviously the best view on the ferry! 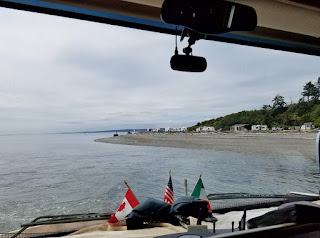 It was a good day for a crossing - smooth seas all the way. We had a nice view of the Olympic Mountains in the distance, although it was a bit overcast. 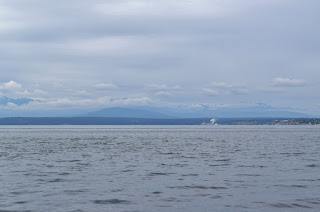 Pulling into the dock was no problem for these guys - they do it so many times that it all goes smoothly. 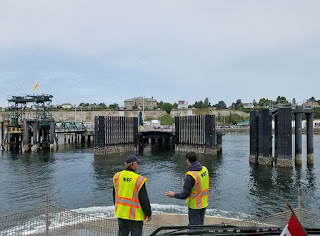 We compared this ferry to our old cargo ferry in Vieques. Actually no comparison, but one interesting difference was the ramp. In Vieques the ramp was on the boat and we had to back our vehicle up the ramp instead of driving forward to get on and off. It could be a real challenge, especially during high tide when the ramp was at a steep angle. Lots of sliding around. On the Washington ferries the ramp is on the dock and it is adjusted to be at the same level as the vehicles - much easier and safer. 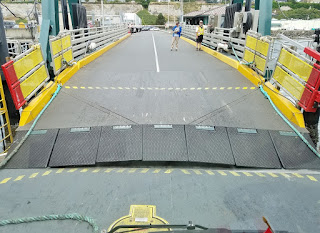 We spent the night in Oak Harbor on Whidbey Island.  From there, taking the ferry to Port Townsend and then driving to Marrowstone Island was 30 miles. 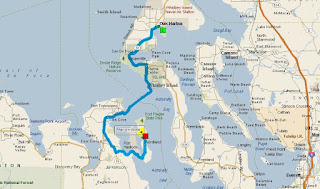 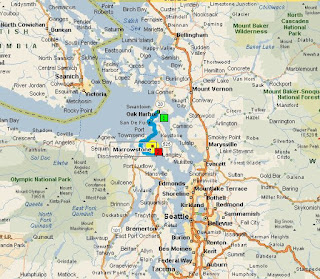 The cost of the ferry ride for both vehicles was $82. Not bad and well worth it. We probably would have spent half that much to drive all the way around.
Posted by Sue and Brian at 3:53 PM 1 comment: