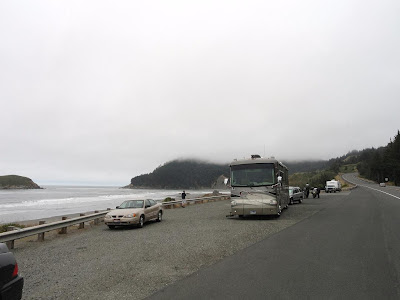 We had a pretty interesting trip down the coast from Oregon to northern California and came across some totally unexpected things. The coast is beautiful with the steep cliffs, uplifted rocks and pounding surf. 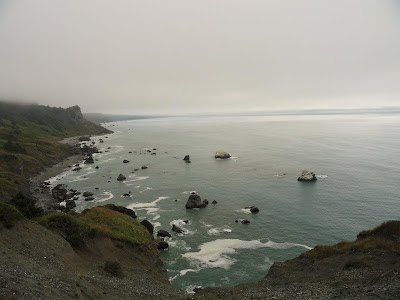 I picked up a tourist guide which listed different things to see along Highway 101. One of them was the 'dolly dock' in Port Orford which is one of only two 'dolly docks' in the U.S. (the other one is in Los Angeles) - and only six in the world - where gigantic hoists lift the vessels in and out of the water each day. The harbor area is too shallow for safe mooring. When not on the ocean, the boats are parked in rows on the dock and cradled in custom-made trailers that are easily pulled around by pickup trucks. We didn't really think we would have an opportunity to see this process in action, but as we were driving through Port Orford we saw a road with the words 'Ocean View' printed on it and of course had to check it out. We were in luck as they were pulling a commercial fishing boat out a few minutes after we pulled in. Pretty amazing and very efficient. 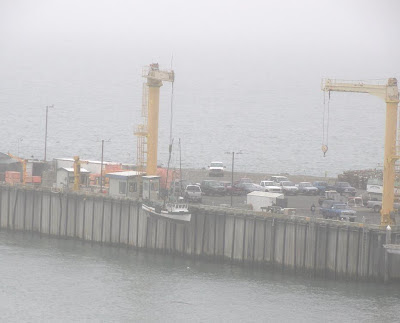 We wanted to spend some time exploring the different parts of Redwood National Park, which also encompasses some of California's State Parks. We weren't sure what the best spot was to have as our home base, but decided on Klamath, California since it seemed to be more or less central to what we wanted to see. Good choice as it turned out. The redwoods were everything we expected and once again we were so happy to see another one of our treasured natural resources being protected.
The redwood trees are the world's tallest living trees. They grow from seeds the size of a tomato seed, weigh up to 500 tons and stand taller than the Statue of Liberty. 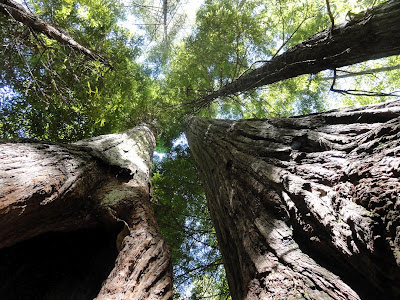 One of noteworthy natural features of Redwood National Park is its herd of Roosevelt Elk. They exist in significant numbers now but the Roosevelt Elk approached extinction at one point. In the early 20th century no more than a few dozen, maybe as few as 1 or 2, still existed in California. The only remaining herd made its stand in the area encompassed by Prairie Creek Redwood State Park and is now thriving. Herds of elk were visible in meadows, and some were even napping in one of the picnic areas. This guy had a pretty good rack on him and seemed to be enjoying snoozing in the sun. The other great part about being in Klamath was the Salmon Festival. We just happened to be there at the right time and totally enjoyed it. The festival is sponsored by the Yurok tribe, which is California's largest Indian tribe. The festival was a celebration of their culture.
The parade was pretty unique, beginning with the flag-bearers who represented a varied group. 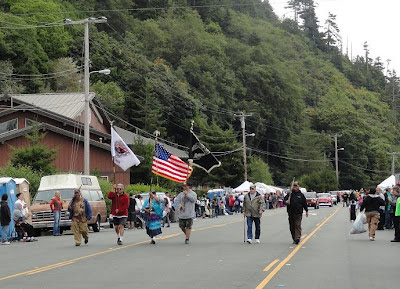 They were followed by the Humboldt State University Lumberjack Band, also known as the 'Banned.' According to their website the main requirement to being a member of the band is that you must be breathing, and if this is a problem there is help available. In addition, any 'marchable instrument' is allowed. They were great. 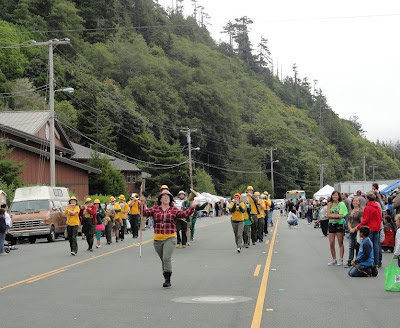 The parade also include several floats, entries from the classic car show, and the ever popular Roller Derby gals from Eureka. Sorry but I didn't get a picture.
The festival celebrated many native traditions including native dresses which were made by tribal members. Some of them have been passed from generation to generation. The woven hats were something we had never seen before as were the beading and natural materials used in the dresses. 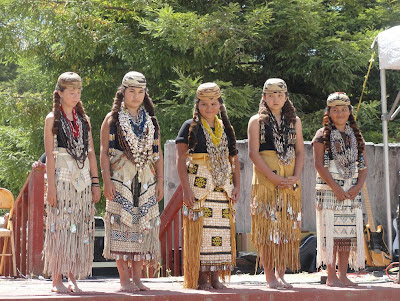 We were able to watch a traditional game called the Stick Game. It was played on a large sandy field and began with the youngest kids playing the game first. This was followed by progressively increased age groups playing. The game was described to us as similar to Lacrosse. The game began with pairs of kids using their sticks (3 pairs), which had hook-like curves on the end, to try to move a pair of stringed balls down the court. 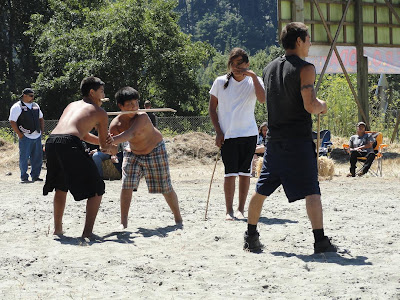 A twist in the game seemed to be that it was desirable to be able to tackle and wrestle one's opponent to keep them from gaining access to the stringed balls. Sounds crazy and hard to describe but it was definitely entertaining. I was really impressed by the sportsmanship and caring that all of the kids exhibited. The shirtless kids pictured are the players while the ones in shirts are their "mentors" who make sure they don't seriously hurt each other whilc coaching each player. 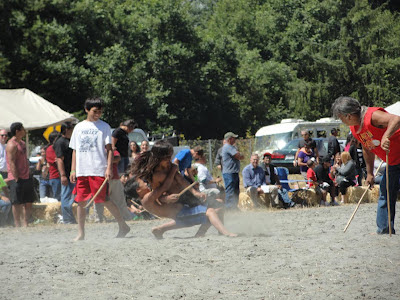 All in all, very informative and lots of fun.
Posted by Sue and Brian at 8:10 PM 2 comments:

We've been escaping the heat by spending time in the Northwest this summer. Our first stop was in eastern Washington where we visited some of the wineries. It's also a big hops area since the majority of the hops used in beer production can be found there. Hops plants which reached well above 15 feet were planted adjacent to vineyards, making an interesting contrast. 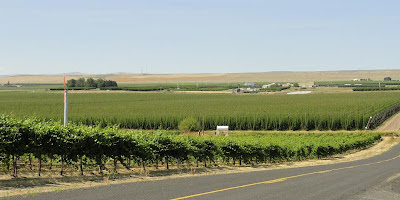 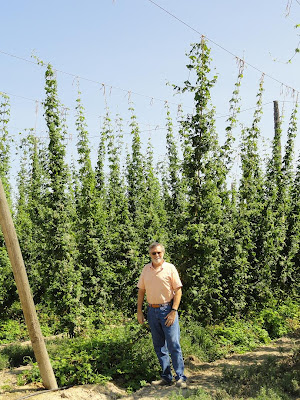 After leaving Prosser, our base in wine country, we headed for the coast via the White Pass Scenic Drive which runs between Mt. Rainier and Mt. St. Helens. It's a gorgeous drive and we had many fantastic views, including this one of  Mt. Rainier. 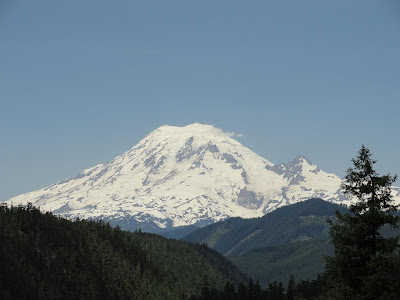 Our friends Judy and Jim were camp hosting at Mystery Bay in the Puget Sound for 2 weeks, and there just happened to be an RV park one mile down the road so of course we joined them. They had a spot on the dock with an incredible view. The crabbing was great and we were treated to fresh crab in every form just about every day. Yum! 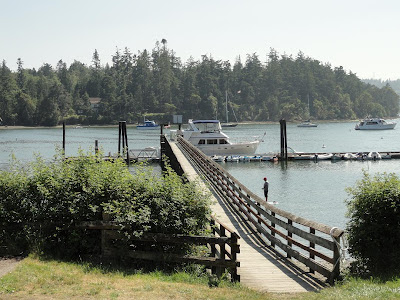 Judy and I resumed our lunch and shopping excursions which of course was lots of fun. 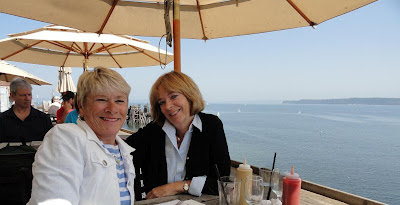 After leaving Judy and Jim we headed to Vancouver to visit with Roberta and Matt. We don't consider ourselves city people by any means but sure do love Vancouver (and Roberta and Matt too). Of course we had to sample from the myriad of cuisines - sushi, Ethiopian, seafood, and so on. Matt took us out to Granville Island which is always fun to visit with the markets, artisans, people, boats and scenery. Even Brian seems to enjoy the market there. 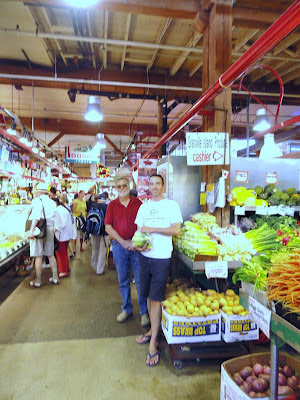 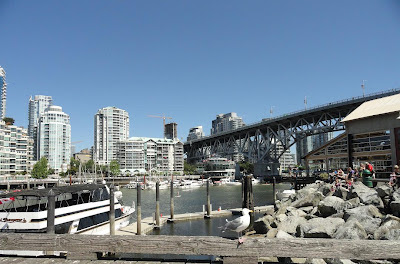 We spent a day at one of Vancouver's beaches where Roberta and Matt did a long distance swim followed by some free diving. Both Brian and I felt like the old fogies hanging out on the beach, watching the kids, but it was fun and we enjoyed our BC beach day. 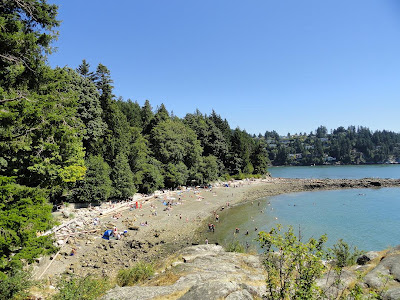 After Vancouver we began working our way south along the rugged coasts of Washington and Oregon. It's a beautiful and impressive coast with the rough surf and rocky shore. Even with the sun shining the fog is ever present, hanging just beyond the beach, waiting to work its way inland. 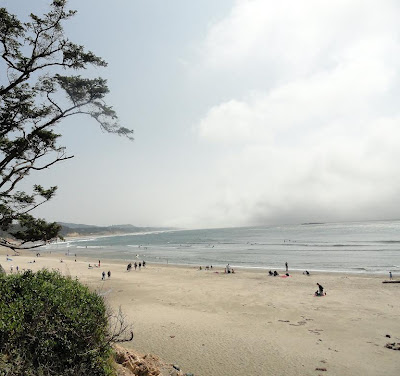 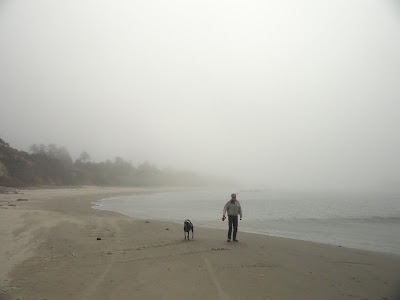