Both of these cities are great places to visit. It was our first time in Savannah so we took a trolley tour. We learned quite a bit about the history and were able to see many of the historic homes and squares. 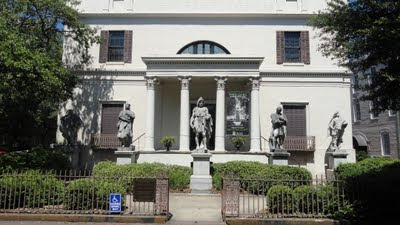 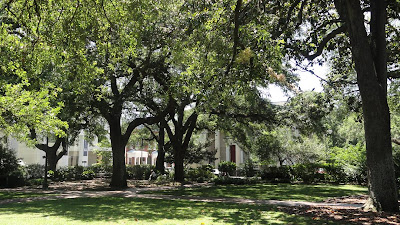 After the tour we roamed around on our own. Savannah has a large port and many historic buildings along the river. 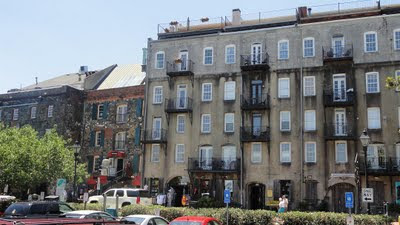 We had lunch on a second floor balcony overlooking the river and were amazed at the size of the ships going by. 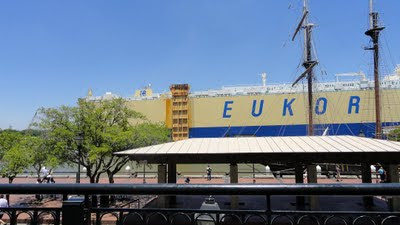 Charleston is a bit different than Savannah. It was largely untouched during the Civil War so many of the buildings still stand. One of the unique things about the historic homes is their side porches. Porches are positioned on the side of the home rather than in front. A unique feature of the side porch is that many of them have an exterior door. Side porches have widely-spaced columns along the length ensure open expanses to capture breezes. 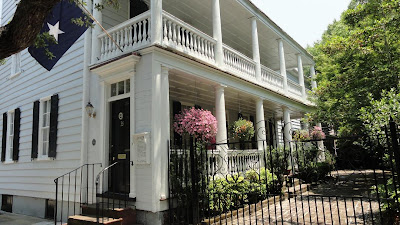 When the outer "hospitality" door was left open, it was a signal to neighbors and friends that the owners were home and ready to receive guests. Placing the porch on the side also gave owners more privacy and a deeper layout on typical long, narrow lots. 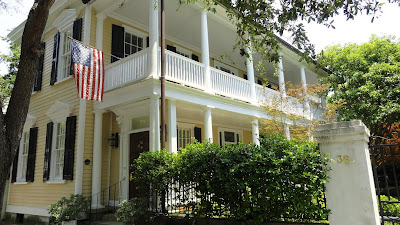 Located off the very southern coast of Georgia, this area preserves most of Cumberland Island. There are some private homes but the majority of the island is protected. The only way to get there is by boat, so we took a ferry over and spent the day exploring.
We began our hike on this road, overhung with trees dripping Spanish moss. Very southern. 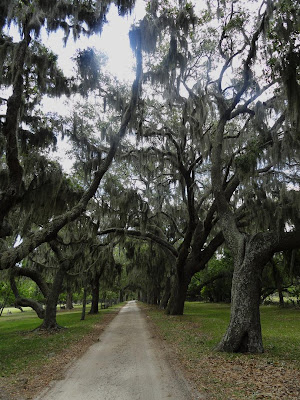 We stopped at the Dungeness Ruins. At one time this huge estate belonged to the Carnegie family. It burned down in 1958 and was never rebuilt but it was easy to see how grand it was at one time. 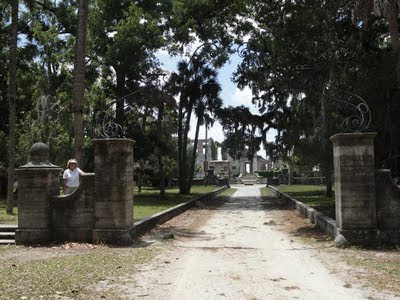 We hiked out to the beach, passing wild horses and wild turkeys along the way. The beach was fabulous, and I even picked up a few seashells. 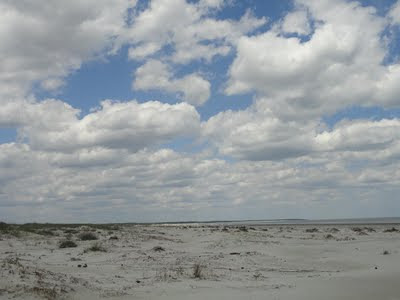 After hiking down the beach we cut across the island to reach our ferry stop. We saw the most incredible trees when we got off the beach. There were huge live oaks, named this because they always have green leaves. They were amazingly twisted and towering high above us. Following are some pictures, but I think this is one you have to see in person to truly appreciate- 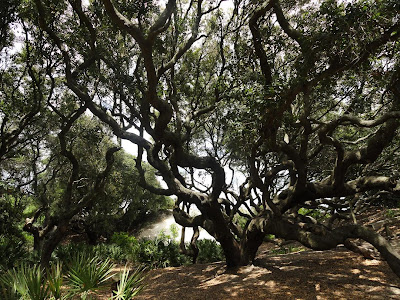 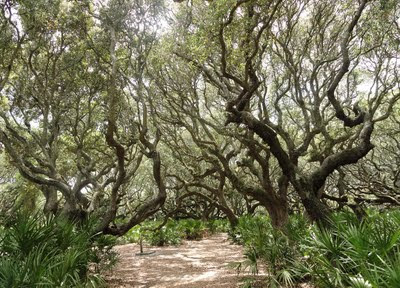 Posted by Sue and Brian at 4:16 PM No comments: 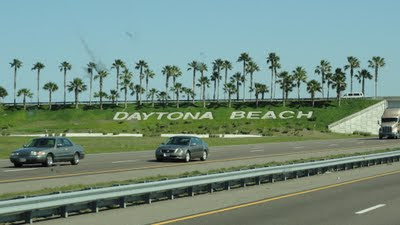 After the tornado outbreak in Alabama we were happy to arrive in Florida. Our first stop was Daytona Beach, a place I'd always wanted to see. We were there on a weekend and I was pretty amazed by the number of people on the beach. My visions of people driving cars on the beach weren't quite a reality- traffic was restricted to a beach road, complete with stop signs. Not my kind of beach but obviously it works for others. 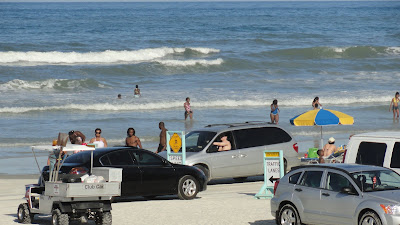 After leaving Daytona we headed for Palm City, where Brian's brother Bruce and his wife Eileen live. Palm City is near Port St. Lucie and Stuart on the east coast.
We had a great visit, drank lots of wine, and toured the area. Brian's sister Laurel even flew down from NY for a few days so it was bit of a family reunion.  Some highlights of our visit --- 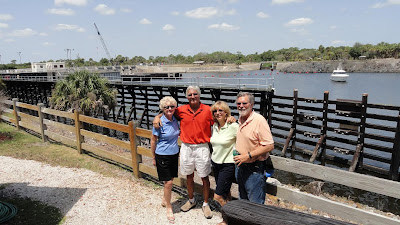 The locks on the Okeechobee Waterway which connects the east and west coast of Florida. We saw some huge manatees in the locks - all boat traffic is halted for them.

We found an off-leash dog beach (Tilly's favorite thing in the world) and she had a great time running in the surf and rolling in the sand. 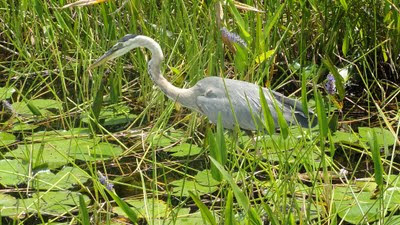 We watched this Great Blue Heron stalk and catch a large fish which it swallowed in one gulp. It then went out and got another one - what an appetite. 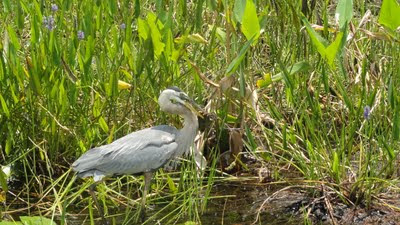 No trip to Florida is complete without an alligator sighting-- 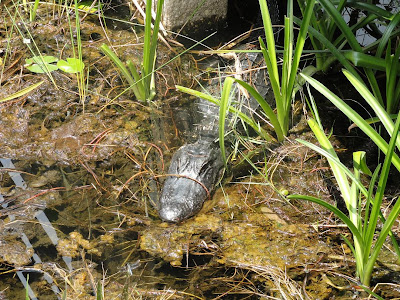 And a concert on the water-- 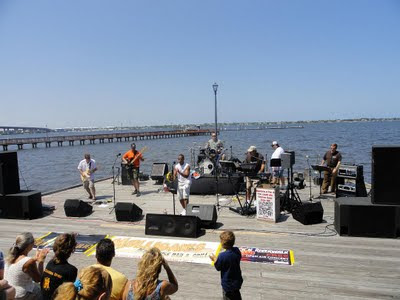 Posted by Sue and Brian at 3:04 PM No comments:

After leaving Clarksdale we headed for Red Bay, Alabama, where our Bus was manufactured. We planned to be there for a week or more since we had several things to take care of and Red Bay is a great place to do that.
Red Bay is in the northwest corner of Alabama and we found ourselves in the crosshairs of the tornadoes that caused so much devastation in that area. The Tiffin Service Center has an adjacent campground where we were parked along with over 100 other Tiffin motorhomes. They have a customer lounge which doubles as a tornado shelter. It has concrete block walls but it would not have been enough to protect us if we had gotten a direct hit. Fortunately that didn't happen. However, it was quite an experience.

Tornado sirens went of 4 or 5 times starting at 3 AM on Wednesday morning, sometimes with only 10 minutes between rounds. We went to the shelter along with everyone else. The TV was on in there, connected to cable, so we were able to watch what was happening and what was coming. Our biggest threat was a cell coming from Tupelo which was massive and headed directly towards us. At the last minute it veered a bit south and hit the town of Phil Campbell which was 30 miles or less from us. Another tornado hit 7 miles north of us. We were so fortunate not to have been hit. Reports from Phil Campbell on Thursday morning were from a woman who lived there and had a motorhome in Red Bay. She said they were picking bodies out of the trees. Unbelievable. One of the workers at Red Bay said they were finding mail from Smithsville MS, another nearby town that was devastated. This is still so unbelievable to us.
NBC Nightly News reported about the two towns near Red Bay that got hit - Smithville, MS and Phil Campbell, AL. The first report said there were 26 dead in Phil Campbell out of a population of less than a thousand. Both towns were pretty much wiped out.
After leaving Red Bay we headed for Palm City, Florida where we are visiting with Brian's family. On the way down here we saw literally thousands of emergency response vehicles heading north. We saw truckloads of  large generators, power trucks, cherry pickers, military vehicles, backhoes actually driving on the interstate, and so on.We assume more equipment is heading that way from many other directions as responders from all the surrounding states send help.

We feel extremely lucky and our hearts go out to those who weren't as fortunate. No pictures to post this time - I think we've all seen the devastation this tornado outbreak caused.
Posted by Sue and Brian at 12:04 PM No comments: