While we were in the San Diego area we went to the U.S. Sand Sculpting Challenge which was held on Pier B in the downtown area. Rather than dealing with parking downtown, we parked the car in the free ferry lot on Coronado Island and took the ferry over to to Pier B. We had a nice boat ride and avoided the downtown traffic.
Eleven World Master sculptors from seven countries were competing in the Challenge. Each of the artists boasts a long list of international awards for their work and it's easy to see why. I've included the names of the sculptors with their work. The details of their backgrounds, educations, experience and awards are too much to include in this blog but are readily available on the internet should anyone wish to learn more about them. 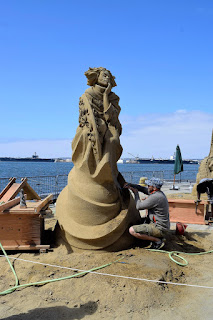 The sculpture above won the competition. When it was completely finished, it was about 12-feet high. Ilya Filmontsev of Russia created the figure and called it “Nostalgia.” It was an exquisite sculpture of a woman encircled in a robe that began at her feet as the Eiffel Tower, holding her head in her hand as she looked into the distance. We didn't stay long enough to see it completely finished, but what we saw was impressive - hard to believe this could be done with sand. Be sure to click on the photo to see the details up close. 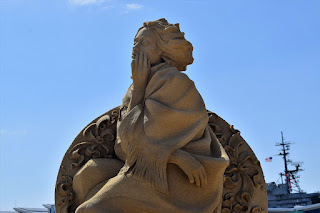 There was a model that the sculptor was following next to the large sculpture. Many of the sculptors had models or drawings that they were using for reference, but not all of them. 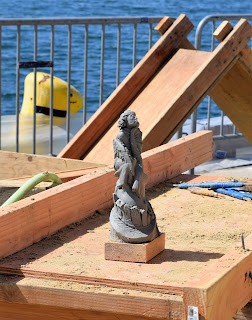 Michella Ciappini from Italy is the sculptor of  'Surrender to Diversity'. She said that it is a statement against racism. The fierce crocodile could easily eat the smiling bunny, but they're getting along. 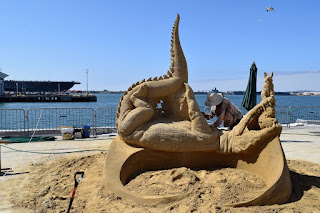 This one got my vote for People's Choice. There are a series of profiles layered one behind the other - I can't imagine how he did this. The title is 'Alpha Waves' and the sculptor is Fergus Mulvany. Not surprisingly with a name like that he's from Dublin, Ireland. 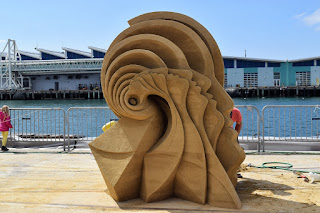 All of the profiles met at at this point with the little head in the middle. 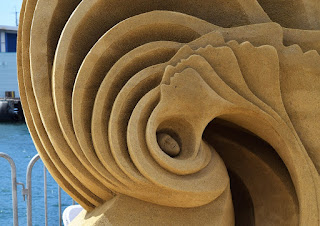 This one is called 'Yell.' The sculptor, Benjamin Probanza, is from Mexico City. Probanza said that it is meant to be critical of not just combative individuals, but institutions that threaten people with militant behavior. 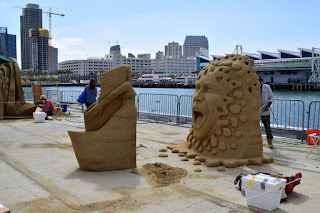 The sand sculpture on the backside, still being worked on. 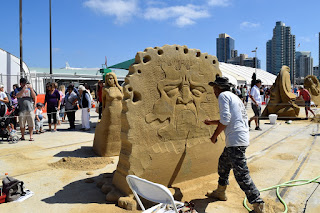 This sculpture, called 'Rockin' Bobbin', is by Kirk Rademaker from Stinson Beach, California. 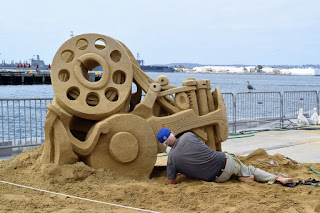 I wonder where the idea to make a Dali-like sewing machine came from. 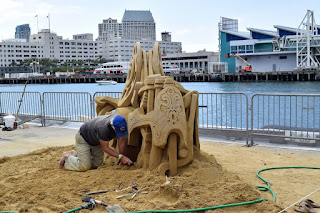 I saw a picture of this one, 'Revealed' by Melineige Beauregard from Montreal, on the internet when it was completed. Ms Beauregard can be seen behind the center opening, sculpting a baby as it would appear in the womb. 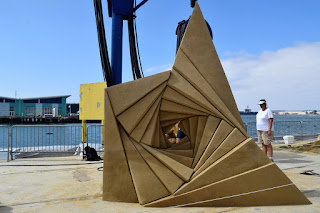 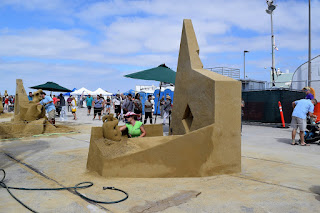 'What is the Real Face' is by Agnese Rudzite-Kirillova from Latvia. 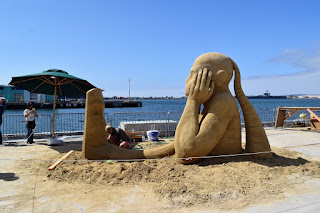 We were watching Susanne Ruseler from the Netherlands as she was working on her 'Armadillo' when it was announced that there were only two hours left to finish. 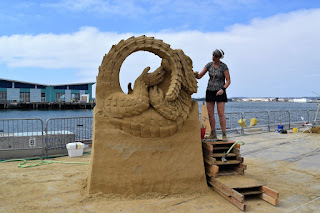 We didn't think she'd get it done with the same amount of detail on the entire sculpture, but she did. 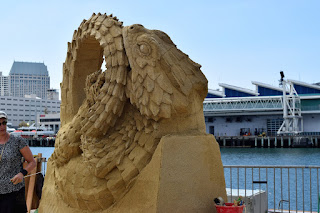 'Out of Reach' is an appropriate title. It's by Thomas Koet from Melbourne, Florida. 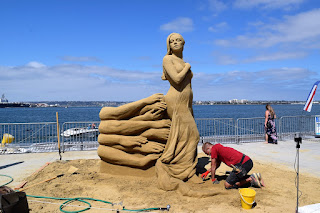 'The Man Who Wasn't There' by Rusty Croft from Carmel, California is another one that really got our attention. Croft seemed to be having a good time and was talking to people while he was working, answering questions and describing his sculpture. 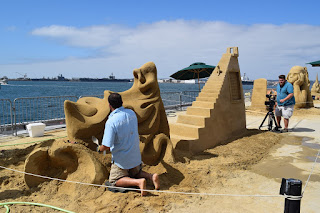 The quote that the sculpture is based on seemed familiar, so I looked it up.  It's from a poem called"Antigonish" written in 1899 by American educator and poet William Hughes Mearns. It's also known as "The Little Man Who Wasn't There", and was a hit song under that title. It was inspired by reports of a ghost of a man roaming the stairs of a haunted house in Antigonish, Nova Scotia, Canada. 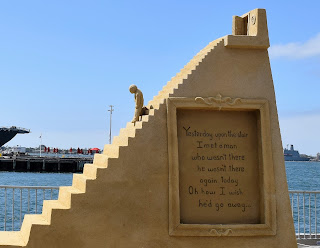 The back of the sculpture has a door that the artist said went to his break room. 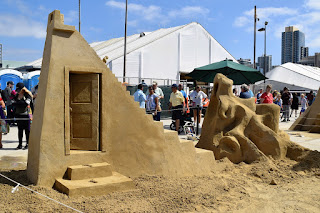 The International Masters began their sculptures on Friday and had to finish by 2:00 on Saturday, the day we went. There was another competition of team sculptors from California called the Cool CA Carver Competition. Since the teams were beginning their work on Saturday and would finish on Sunday we were able to watch them and get an idea of how these sculptures are made. There are a couple of links that explain the process at How it's done  and http://www.sandscapes.com/how_to/

Special sand is used for this competition. Beach sand, like what’s used at many mega sandcastle competitions, is rounded and only holds when wet. The specially-quarried sand used in this competition is named Sorrento Blond after its place of origin in Sorrento Valley. It is coarsely ground to have sharp edges that interlock, enabling the sculptors to compact it into artworks with height and be able to carve cut-through holes. The sand is continually wet and compacted into the forms, making it almost like concrete. As we watched the sculptors, at times it seemed that they were indeed carving concrete and at other times they would gently wet the sand to do their carving. A variety of tools were used - it was all very interesting to watch.

This team of women had sculpted the top tier and were removing the forms from the next tier. They said that since this competition didn't allow any power tools, they had to use nails instead of screws. They were working hard with crowbars to get the form to come apart. From looking at the top tier, it appeared that this would be a sea sculpture of some sort. 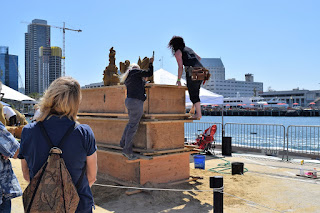 These guys has also sculpted the top tier. It looks like they used come-alongs to keep their forms together. 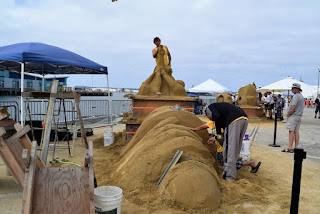 This is a model of what the above sculpture was supposed to look like when finished. I took the following quote about the meaning of the sculpture from the San Diego Tribune.

"Lady Liberty’s torch was the centerpiece of the work by the I.B. Posse, a three-man team competing for the amateur Cool CA Carver prize. Rising from the torch is a huddled mass of people, one of whom flashes a “V” for victory. “She’s passing the flame,” said artist Leonard Gonzales of Imperial Beach. “It’s a message for everybody in the world that we need to remember what Lady Liberty represents. To be united.”
Was it also a message about Republican Presidential candidate Donald Trump’s immigration policy? “It can be taken that way, depending on your interpretation,” he said with a grin, digging his trowel back into the sand."       Hmmmm. 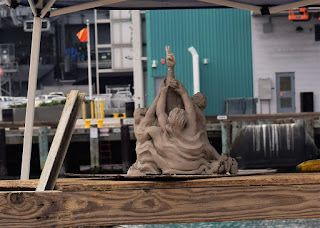