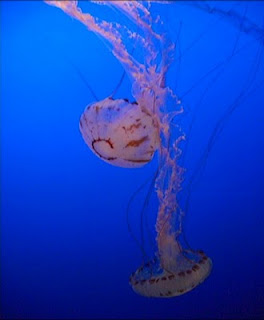 The Monterey Bay Aquarium on Cannery Row is an amazing facility and is definitely one for the bucket list. In addition to having some wonderful exhibits it is a premier educational venue. We are both amazed at what we learn about our world and the fragility of life on our planet each time we visit. It is truly alarming to see what we have done to our planet and the creatures who inhabit it, but the emphasis at the aquarium is on the positive and what we can do to provide some stability and sustainability in our oceans. 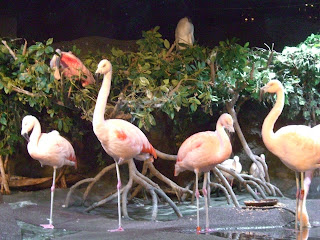 The flamingos don't look real, but they are! 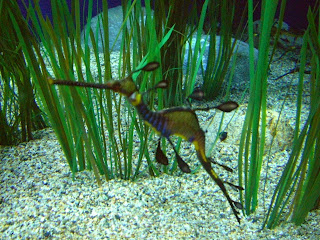 Weedy seadragon in the seahorse exhibit.

We had great weather for a drive around the Monterey Peninsula.  We did the 17 mile drive last year so this year we decided to drive through Pacific Grove, which is a beautiful area. There were several places to pull off the road and enjoy the scenery while taking a walk. As we came around a corner we were quite surprised to see all the commotion off- shore.
There were 20-30 boats weaving in and out of the same area, obviously fishing for something. It looked like a few collisions were imminent but they all seemed to keep out of each others way. Pretty amazing sight. We later found out that they were netting squid. It seems unbelievable that there would be that many squid, but there are. Squid are still a sustainable catch and are not being over-fished. Some of it is used for bait and food here in the U.S., but approximately 70% of it is shipped overseas.
Posted by Sue and Brian at 6:12 PM No comments: 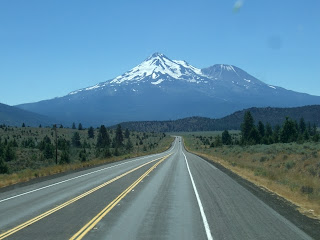 As always, we enjoyed our time in California and spent over a month there.
Mount Shasta dominated the scenery as we entered the state and for quite a ways as we traveled. Impressive sight and we were surprised to see so much snow still on the peak.
Our first stop was Lassen Volcanic National Park which has the southernmost active volcano in the Cascade Range. Rocks and ash are scattered up to 200 miles, and there are still steaming fumeroles and bubbling mud pots. It was incredible to see how far some of the huge boulders were thrown during the last eruption in 1915. 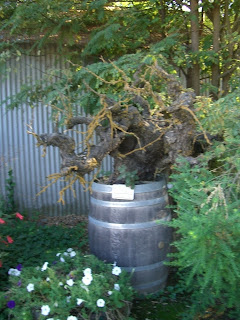 Time for wine country so we headed for Lodi, one of our favorite areas. Lodi is home to some of the oldest vines in the United States and produces some incredible zinfandels.  The picture to the left is of a 118 year old vine that we found at Jessie's Grove Winery.
One of the reasons we really enjoy Lodi is that the wineries are still small enough that we are often able to talk to the owners or winemakers about their wines. The tasting rooms aren't crowded during the week so we have the opportunity to try some great wines and get to know the people in the area. At this point Lodi is fairly low-key, but as with many things in California it is being 'discovered'. For many years this area has produced wine and sold grapes to many other wineries and now people are coming to taste, and speculating that this is the next Napa. Don't know about that but we hope to continue our visits in the coming years. 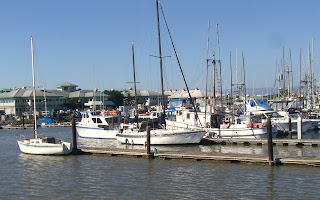 We continued south and stopped in Moss Landing just north of Monterey. The research facility for the Monterey Aquarium is there and it is also a major commercial fishing port. Phil's Fish Market, a very popular local restaurant, was withing walking distance of our RV park. Phil's cioppino was the winner in a throwdown with Bobby Flay, for those of you who follow the Food Network, and is one of the premier seafood restaurants in the Monterey area. Yum!
Posted by Sue and Brian at 5:50 PM No comments: