Ouray (YOUray) is awesome. It is located in the San Juan Mountains, where many of the mountain peaks are over 14,000 feet. 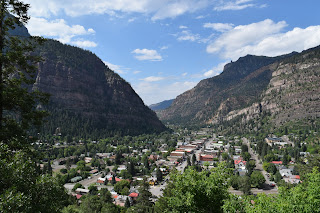 We have driven through Ouray before but this was our first time staying here - unfortunately we could only get a spot for 3 days. I think we'll be back. We had a great view from our RV space, somewhat hazy the first few days due to smoke from the terrible California fires. 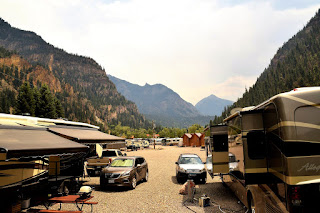 We spent our time hiking and looking at mountains, cliffs, waterfalls and rivers. One hike took us to the bottom of Box Canyon to see the falls which plunge 285 feet. The water is low due to the drought, but still seemed to be going through at a pretty good clip. In the photo below, water is cascading down a chute just above the outlet at the bottom. 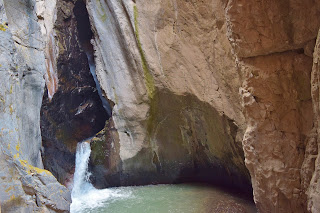 Much of this area was mined for many years. Old mining equipment can be seen behind Brian. 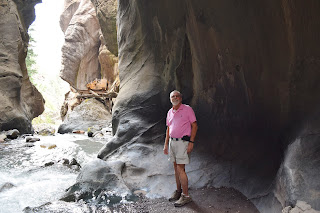 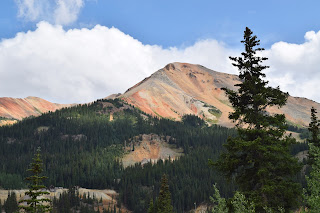 We (Brian) drove the Million Dollar Highway several years ago with the Bus towing our car. While it could be a bit hairy at times, it was doable as long as we took our time. We came into Ouray this year from another direction so decided to take the car back on part of the route. We were able to stop and enjoy more of the scenery.
The origin of the name Million Dollar Highway, built primarily by Otto Mears, is disputed. There are several legends including that it cost a million dollars a mile to build in the 1920s, or that its fill dirt contains a million dollars in gold ore. Who knows.
This was once an area rich in ore containing silver and gold. The remains of the Yankee Girl mine are part of the Idarado Mine. Evidently there was such a rich vein of silver that the ore was sent straight to the smelter. Mine tailings, a trestle, and buildings are still visible. As we understand it, there is a major clean-up operation going on. 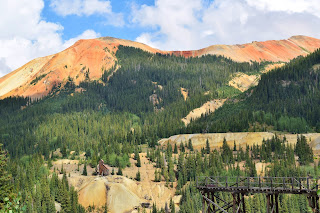 It's possible to drive through the old Yankee Girl town. I'm guessing it was one of those company towns where everyone depended on the company for everything, probably never getting out of debt to the company - 'I owe my soul to the company store.' 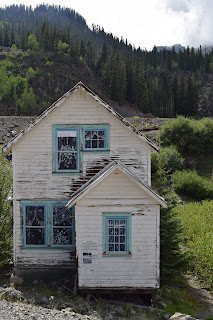 It also seems that this is the Jeep and ATV/UTV capital of the world. We've never seen so many of them in one place. It makes sense, though, because there are a multitude of trails through the mountains and mines. Pretty cool - maybe next time we'll rent a Jeep.
Posted by Sue and Brian at 5:17 PM No comments: