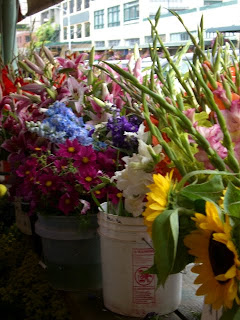 After a great time in Canada we headed for Bremerton and the Olympic Peninsula. We were fortunate to be able to park for a weeek at the Bremerton Yacht Club, where Judy and Jim spend the summer on their beautiful live-aboard boat.  We had a great visit, exploring the area and getting caught up.
We all took the ferry into Seattle one day where we walked around the waterfront and Pike Place Market. We watched the vendors throw fish to waiting customers, listened to some street musicians, and reveled in the abundance of flowers and fresh produce. This wasn't our first visit, and as in many places we've been lately we were amazed at the number of people we saw. 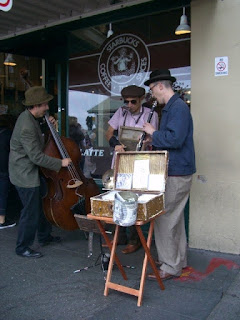 After our trek around the market we had lunch at one of our favorite restaurants on the pier, Elliott's. 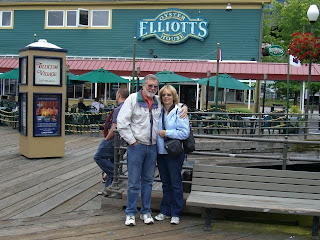 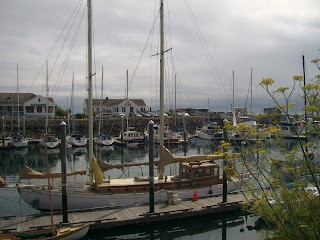 One of the must-see places on our list is the Olympic Peninsula and that's where we headed next. Our first stop was in Port Townsend, which is one of three named Victorian Seaports in the US and the only one on the west coast. There is a small RV park just above the marina and we were able to get a spot overlooking the Straits of Juan de Fuca. It was interesting to watch the boats and kayakers come and go, and we had a nice beach to walk Tilly on right out front.
A few months ago we joined a new club called Harvest Hosts, which is modeled after similar programs in Europe. The idea is that RVers in self-contained units can stay a night or two at various farms and wineries for the cost of the membership, which is nominal. It is a situation which benefits both the visitor and host. The visitor gets a free place to stay and the host gets some business and publicity. 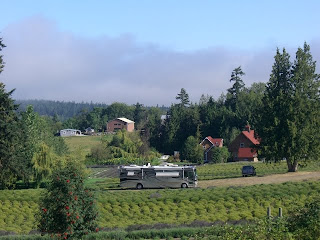 We used our membership for the first time to stay at the Purple Haze Lavender Farm in Sequim ('Skwim' rhymes with swim) and were very impressed. The people who own and work at the farm were very pleasant and accomodating and we loved learning all about lavender - how it's grown, harvested, processed and made into a variety of products. Much of the lavender had been harvested but the fields were impressive. We were  invited to stay for two nights so we were also able to spend time in Olympic National Park as well. We drove up Hurricane Ridge and had some great views of the Olympic Range, including Mt. Olympus, as well as a clear view of the Straits and Vancouver Island. 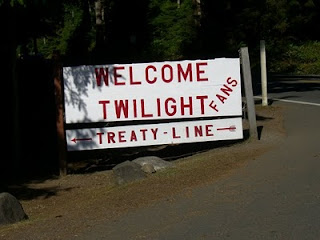 Our last stop on the Olympic Peninsula was in the town of Forks, home of the Twilight book and movies. Everything in the town is pretty well geared towards capitalizing on the Twilight theme, which is a bit weird if you're not fans. However, it was a good place to stay in order to see the sights in this area. We went to La Push and Rialto Beach, which was beautiful. There are huge logs washed up on the beach - many as large as 6 feet or more in diameter. 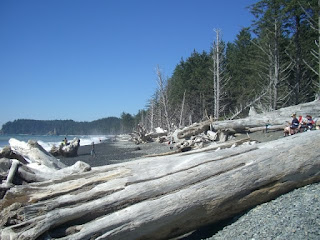 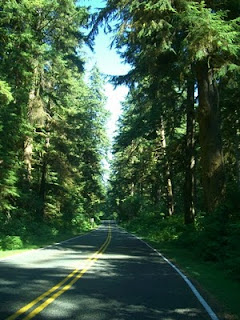 The trees in this area are huge and form incredible canopies over the roads.
The northwestern most point of the continental United States is at Cape Flattery near Neah Bay on the tip of the Olympic Peninsula.  It is part of the Makah Indian Nation. We toured Neah Bay's Makah Museum, which also serves as an archeological research center and showcases artifacts from the Makah's 3,800-year history. It is associated with the Smithsonian and is a world class facility. After viewing the exhibits and walking through a life size long house we headed for Cape Flattery. 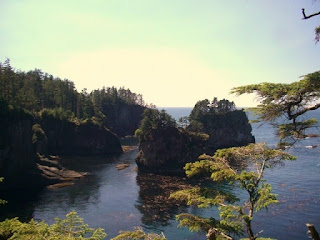 The Cape looks out over Tatoosh Island and huge sea stacks rising out of the ocean. The hiking trail we took afforded breathtaking views of some of the Peninsula's most spectacular scenery.
Our last day was spent in another part Olympic National Park which is accessed from the west. We drove through the Hoh Rainforest and then out to Ruby Beach on the coast. It was sunny in the rainforest which was unusual considering it receives 12 to 14 feet of rain per year. The trees are draped in mosses and looked a bit like something out of a fairy tale. We left the sun behind when we neared the coast and encountered fog, which enhanced the fairy tale quality of the day's adventures. The Olympic Peninsula offers a surprisingly wide variety of scenery and ecosystems in a fairly small area. Another great exploration!
Posted by Sue and Brian at 12:44 PM No comments: 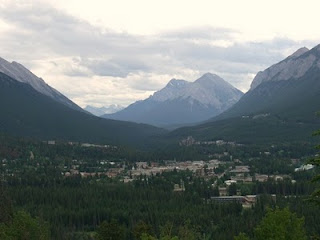 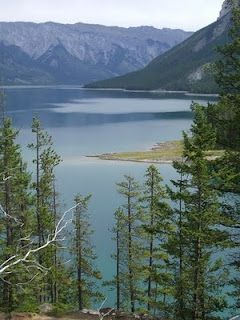 Our first destination in Canada was a campground very close to the town of Banff, which is a much larger town than we expected. It is very crowded and quite touristy but the setting is magnificent. We spent two nights there while we explored the area. The scenery is pretty amazing and quite unlike anything we've come across. Towering mountains and glaciers are reflected in numerous turquoise lakes.
We saw a lot of wildlife, including this baby bighorn sheep peeking out from the bushes - too cute! 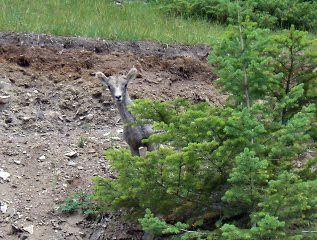 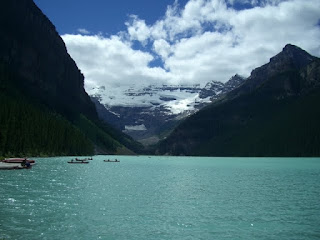 This area is in Banff National Park but different from the area around the town of Banff. Lake Louise is a much smaller town and the focus seems to be more on the outdoors than on shops and bars.  The lake itself is that fabulous turquoise color and surrounded by glaciers and steep mountains. 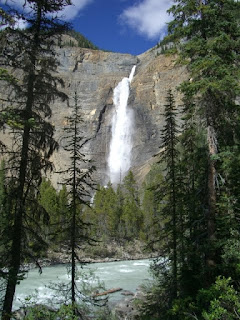 We took a drive up to Takakkaw Falls, which is one of the largest falls in Canada. The water comes from melting glaciers and was shooting straight out at the head of the falls. Very impressive. Takakkaw in Cree means 'it is magnificent' and it definitely is.
The Icefields Parkway 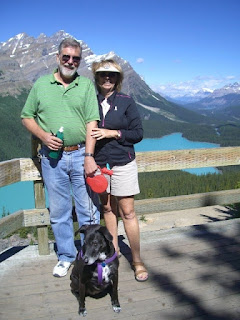 Aptly named, the Icefield Parkway passes within viewing distance of seven icefields and about 25 smaller but still notable glaciers. It is roughly 140 miles long and protected by two national parks - Banff and Jasper. It is a leisurely drive with many pullouts along the way with scenic overlooks or short hikes to scenic overlooks.
Many seasoned travellers call the Icefields Parkway the most beautiful road in Canada and it is rated one of the top 10 drives in the world. We haven't been everywhere in the world but certainly rate it among our top drives. The entire length and surrounding area is a World Heritage Site. 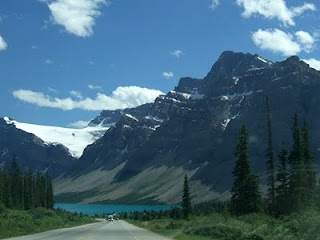 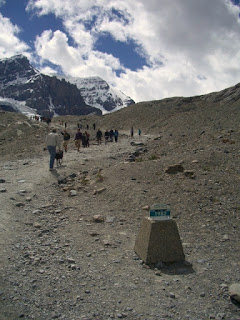 We drove approximately half the length of the parkway to reach the Icefield Center at the Columbia Icefield. Here you can either pay to take a bus tour onto the glacier or hike to the edge of the Athabasca Glacier. We decided to hike. Along the way there are signs showing where the foot of the glacier was in various years. Sadly, we found the distance to be shorter and shorter as time went on. The Athabasca Glacier, like most other glaciers in the world, is rapidly retreating. Another clear sign of global warming. The sign in this picture is from 1982 - hard to believe the glacier was at that point just 28 years ago. 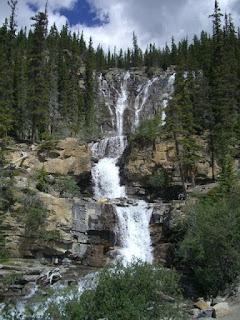 It's hard to describe just how stunning this area is. Very spectacular and well worth the trip - I'm sure we'll be back.
Okanagan Valley 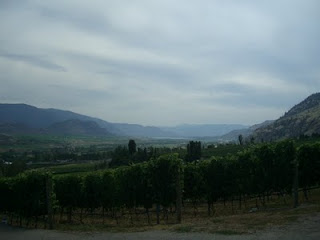 From the icefields to the desert. The Okanagan Valley lies at the north end of the Sonoran Desert and was quite a contrast to the temperatures we had experienced in Banff National Park. We saw rafters on the river and many many campers and boats on the lakes in the valley. 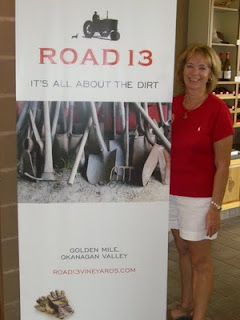 We stayed in Oliver, which is at the south end, very close to the border. It was recommended to us as a low-key place to stay while visiting the many wineries and we weren't disappointed. We went to several wineries and were very impressed with the quality of the wine we tasted. This is the premier wine area in Canada and the wines and wineries reflect that. The wine is only available in Canada so we weren't familiar with the vintners, but would highly recommend it to those of you who love good wine. 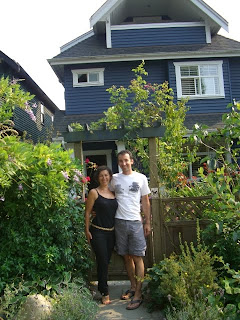 A trip to British Columbia just  isn't complete without a stop in Vancouver, one of our favorite cities and home to some of our favorite people. Once again Matt and Roberta, friends from the Vieques days, were great hosts. As usual we ate way too much great food - Vancouver has to be one of the top places to eat with a huge variety of ethnic restaurants to choose from. We spent time at Granville Island and Stanley Park. It was a great way to end our Canadian adventure - I'm sure we'll be back. 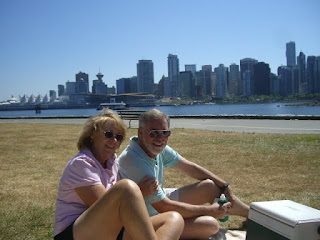 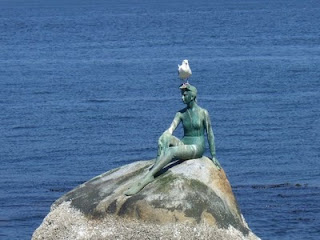