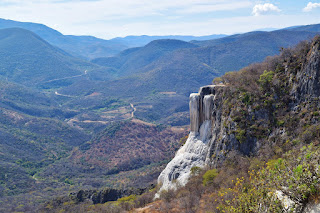 Hierve el Agua is a top ecotourism destination in Oaxaca, especially popular among naturalists, hikers and photographers. The site consists of two rock shelves or cliffs which rise between fifty and ninety meters from the valley below and have white rock formations which look like waterfalls. These formations are created by fresh water springs whose water is over-saturated with calcium carbonate and other minerals. As the water goes over the cliffs, the excess minerals are deposited, much in the same manner that stalactites are formed in caves. There is a similar, but larger site in Turkey called Pamukkale.
One of the formations is called 'cascada chica' or small waterfall. It was pretty easy to access, unlike the larger waterfall which required a guide to hike to the top. We didn't see any way to access the bottom of either waterfall. 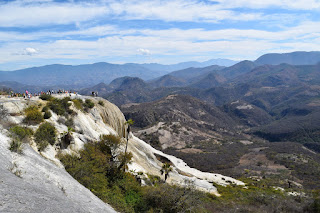 The smaller and more accessible waterfall has two large pools for swimming as well as a number of small natural pools. 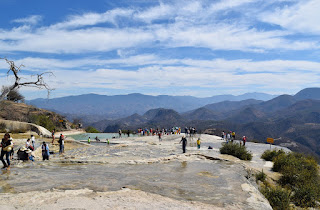 One of the pools is very near the edge of the cliff and is one of the most unique infinity pools that we've seen. 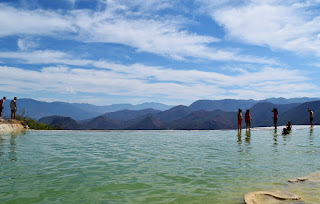 It was very crowded on the day we went, due in part to the holiday season. Lots of people with picnics, swimming and wading and just enjoying the day. We were told that it was an up and down hike to the pools so we wore our hiking boots, unlike many others who were there in flip flops. Don't think we could have made it safely in flip flops, but were probably overdressed for the occasion. That's Sue, all prepared for our hike, leaning against the wall where the water flows from one pool to the other. 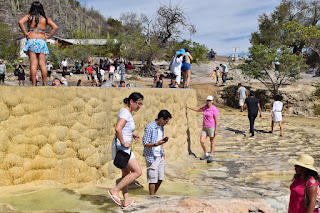 Getting to Hierve was interesting. We drove part of the way on a cuota (toll road) then hit the dirt roads. Ever since the Mexican government decided to promote Hierve el Agua as a tourist destination and improved the road that connects it to Mitla, the two nearest indigenous towns close to Hierve el Agua started a conflict between each other in order to decide who gets the profits from the site. It doesn't matter that this is a natural attraction that existed way before the towns were settled and it's the Mexican government that's paying for its maintenance. The conflict escalated so much that Hierve el Agua was completely closed from 2005 to 2008. Today, both towns have reached an agreement and each one charges an entrance fee to pass on the road. This is in addition to the one that the government charges for entering the place itself. None of the fees were expensive and so many people were going there that I'm sure the towns made a nice chunk of change.

More information as well as maps to Hierve. The new cuota just opened and the toll is 43 pesos ($2.65 U.S.). It's the easiest route and there are signs all along the way. Once you get to Hierve, there are places to camp, restaurants, rest rooms and what looked like a hotel. Old maps will show going through Mitla but the new cuota goes around Mitla and is worth it. The new road has curves but not as many as the map shows. Once exiting the new road and on a paved road to San Lorenzo Albarradas the road gets more and more curves, then turns to dirt road. 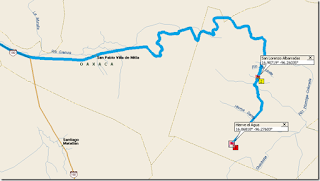