Authentic Talavera pottery only comes from the city of Puebla and the nearby communities of Atlixco, Cholula, and Tecali because of the quality of the natural clay found there and the tradition of production which goes back to the 16th century. This is one of the reasons we wanted to stop in Puebla and learn more about Talavera pottery. We have been to other areas where the pottery is called Talavera, but if it's not from Puebla it's not real Talavera. We chose to visit Uriarte Talavera, a traditional Talavera enterprise in Puebla that has been in existence since 1824. It was begun as a family workshop by Dimas Uriarte, but today it is run by a business group. 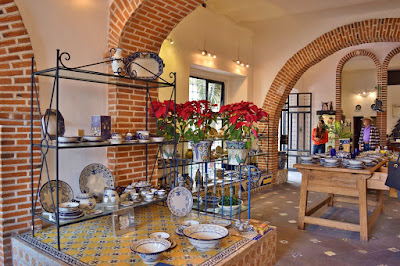 Brian's research led us to believe that Uriarte was the best place to get a tour and it was probably right. We were the only ones on the tour which was very informative to say the least.
The following photo shows the basic process. First, black and white clay are mixed and shaped. The piece is then fired, and when it cools a glaze is applied. The glaze dries and a stencil is applied so that the piece may be painted. After painting, the piece is fired again and is finished. 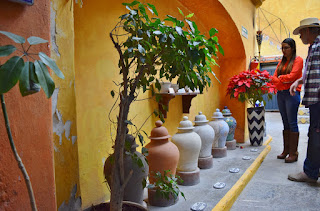 Originally Talavera was mainly cobalt blue and white. Now there are 6 colors used - yellow, green, black, orange, sky blue and cobalt blue. All of the colors are obtained locally except for cobalt blue which comes from Africa. 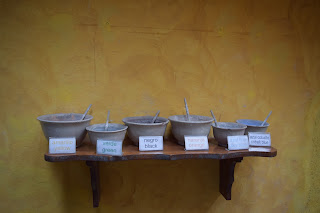 The colors are ground with a large rock being pushed by a turning wheel and paddle - the blue cobalt is shown below, ready to be ground. 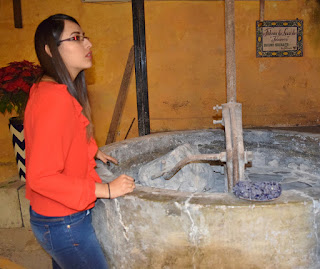 A series of pulleys and belts connect a machine to the grinder. 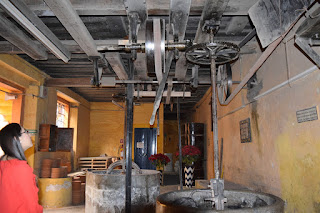 After the clay is mixed the potter shapes the pieces. We were told that Uriarte has 5 potters. Really interesting to watch how quickly the potter worked and how adept he was with the wheel. 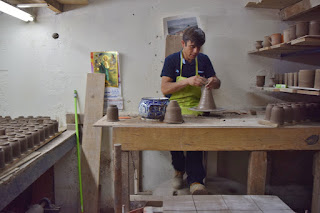 After the first firing a glaze is applied to the pieces. The wet pieces are yellow and turn white when they're dry and ready for the stencils. 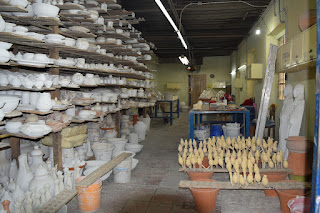 After the pieces are dry, it is the job of one man to level the bottoms and hand paint the Uriarte logo with a donkey hair brush. He must have a very steady hand!

Charcoal is used to apply the stencils to the pieces. It was explained to us that the stencil tells the painters which colors to paint and where to paint them. 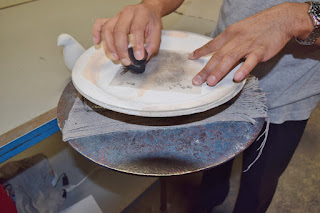 The painters were working on a variety of pieces. The ball this woman is painting appears to be something for the holidays. 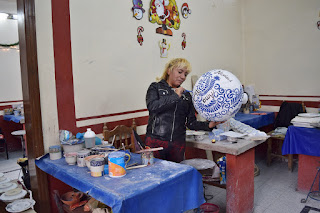 These pieces are painted and ready for firing in the oven. 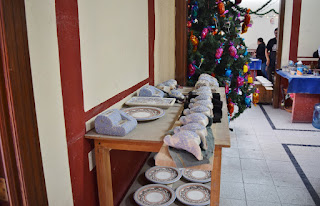 The original oven still stands in one of the courtyards. 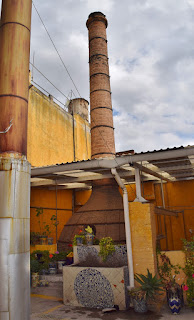 The new oven is obviously larger. 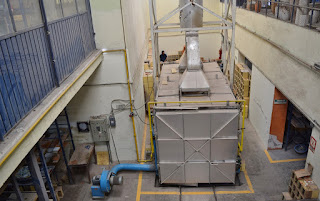 It appears that these two large religious figures are on platforms that roll into the oven, ready for the first firing. They will then be glazed, the glaze allowed to dry, stenciled, painted and fired again. 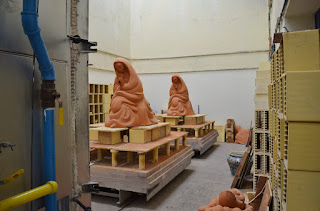 It was a truly fascinating tour and it would take a book to tell all about the process and history of Talavera. Our guide was extremely informative and friendly, and we were able to take our time and ask lots of questions. We highly recommend touring Uriarte if you're in the area.

As a comparison, I took a photo showing Talavera from Puebla, the real thing, and pottery from Dolores Hidalgo in the state of Guanajuato which the people there call talavera. Talavera manufacturers like Uriarte have been under pressure from imitations, commonly from China and similar ceramics from other parts of Mexico, especially Guanajuato. Guanajuato state petitioned the federal government for the right to share the Talavera demonimation with Puebla, but, since 1997, this has been denied and glazed ceramics from other parts of Mexico are called Maiolica or Mayolica.

While we really enjoyed touring Uriarte, I found the city of Puebla to be overwhelming. Too much traffic, big crowds, and the pollution had my eyes watering pretty much the whole time we were there. We walked to the Zocalo, or main plaza, and had a pretty mediocre lunch. After that we walked around the square. There was a lot of activity going on for the holidays including this angel on stilts who was happy to pose 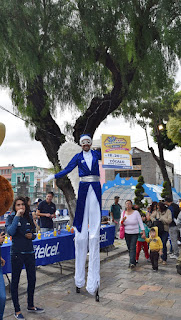 a snow hill for tubing 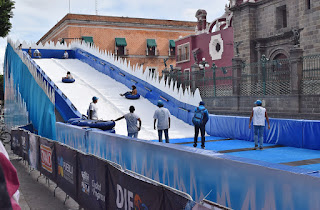 and an ice skating rink where it looked like there was a problem keeping the ice cold enough to skate on.
The main church on the plaza, as well as many of the other buildings in Puebla, shows the effects of pollution in the city. Tough to keep them cleaned, I'm sure. 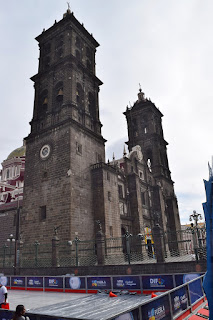 Many of the building facades in the city are tiled and some of them are very nice. 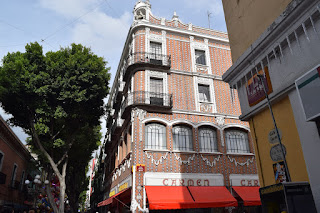 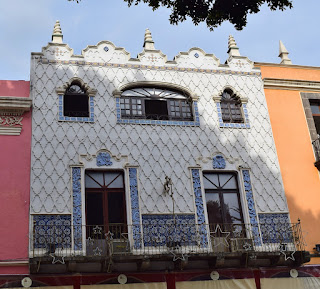