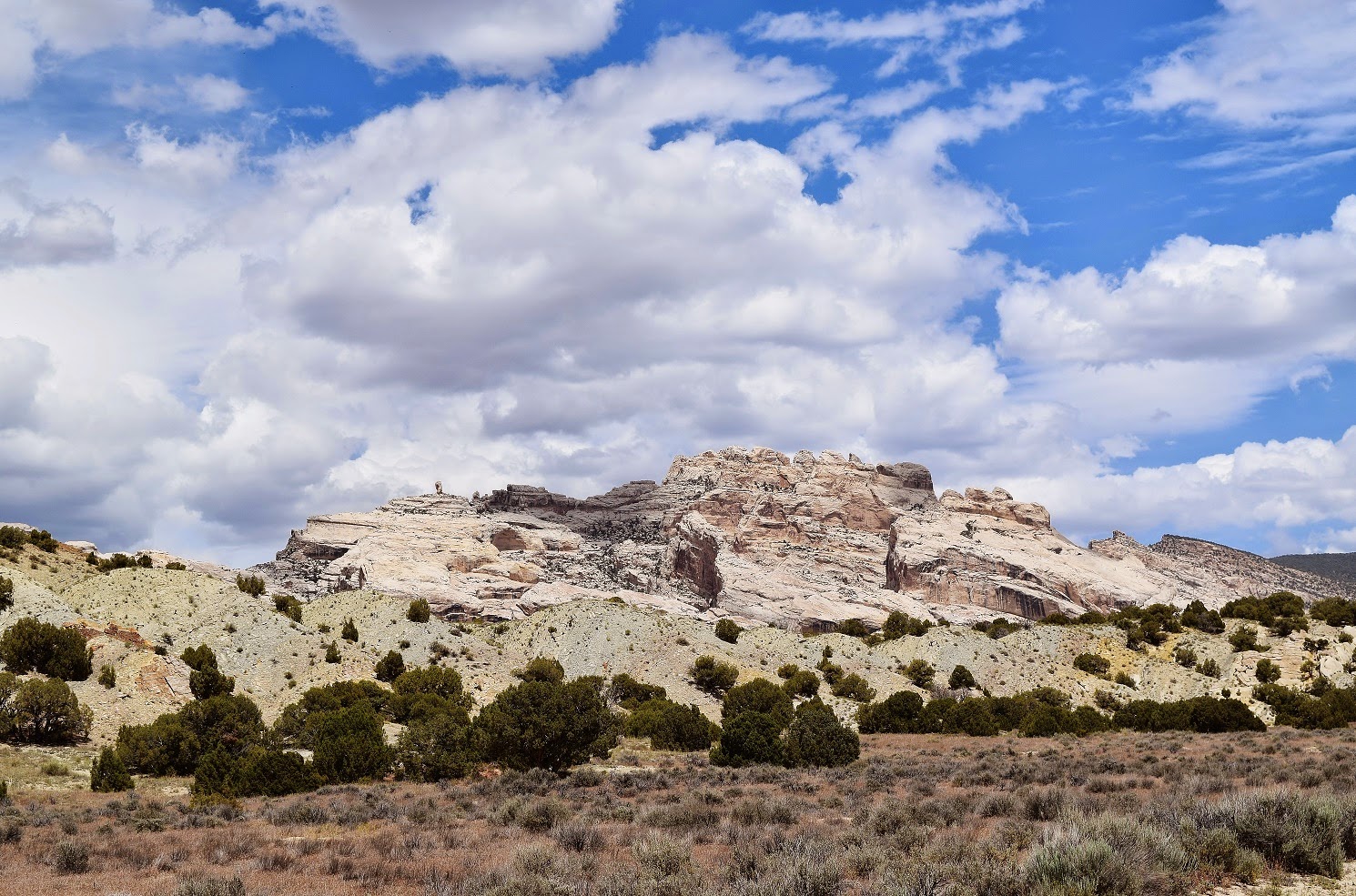 In our continued quest to see as many national parks and monuments as possible we headed for Dinosaur National Monument. Part of it is in Colorado and part of it is in Utah. The best access for us was from Vernal, Utah where just about everything had a dinosaur theme. 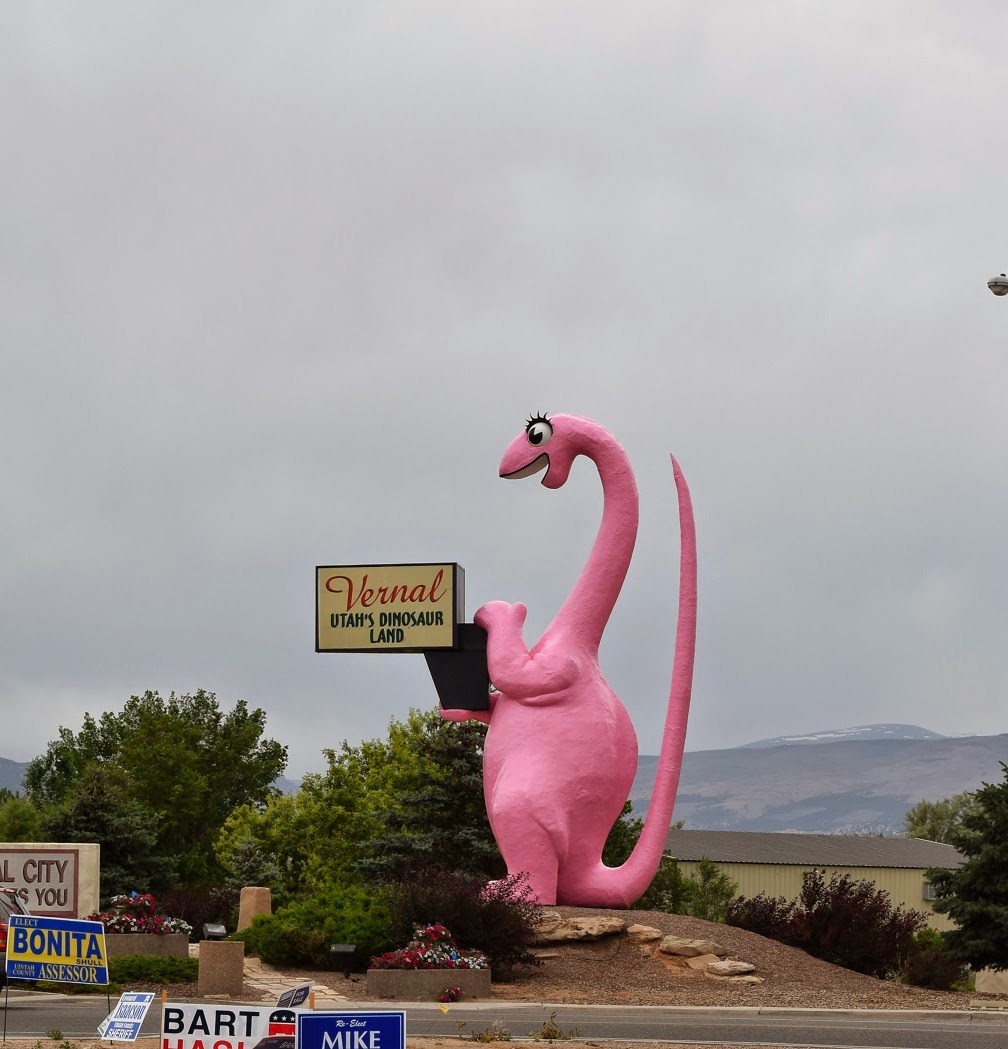 I was actually quite surprised by Dinosaur National Monument as there was more to it than I had expected. The Green and Yampa Rivers meet in the monument so those areas around the river canyons are green and lush, while a variety of unusual rock formations are found throughout the rest of the park. There is a huge amount of diversity in the landscape. In fact, Dinosaur National Monument has the most complete geological records of any National Park Service site. 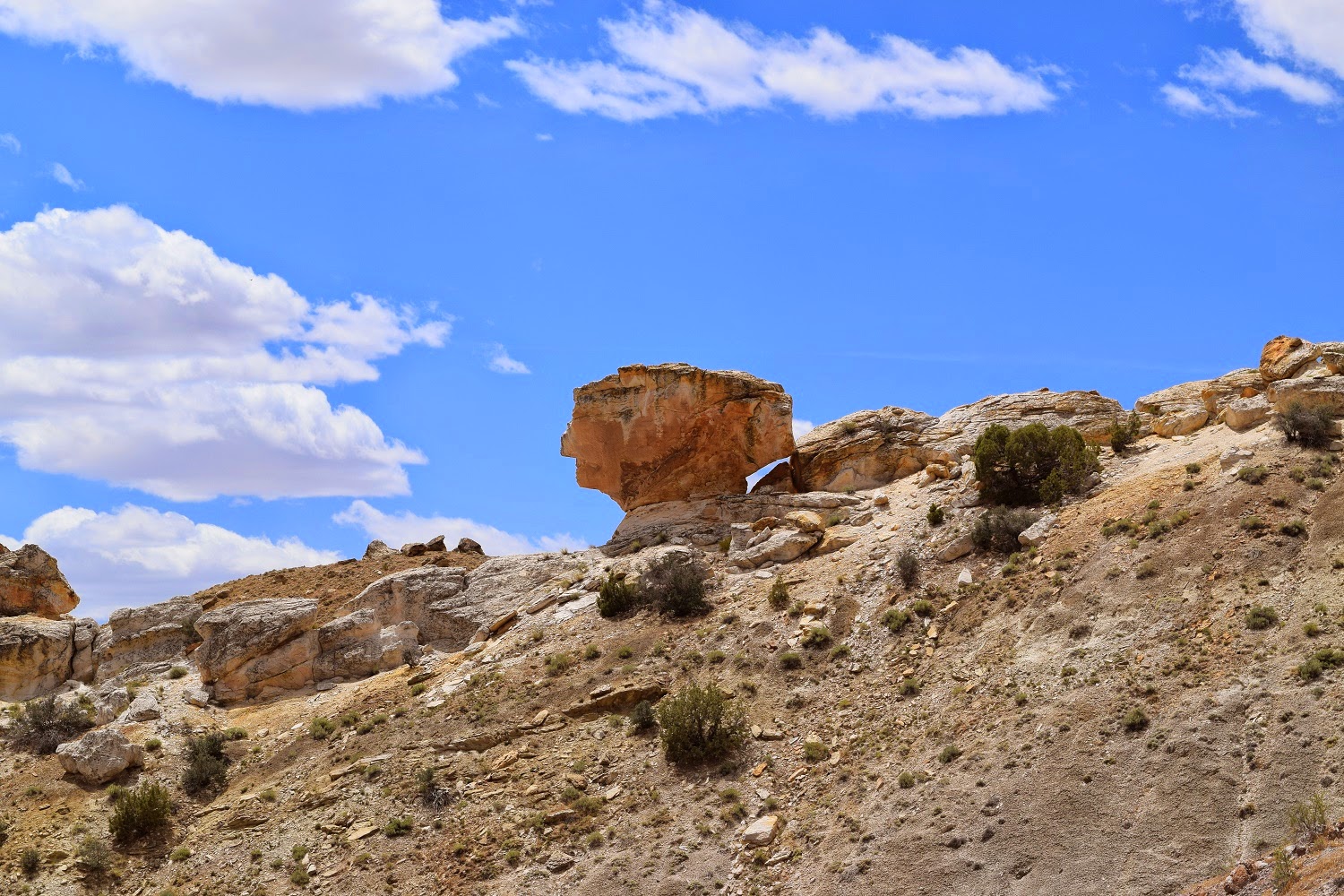 Dinosaur is the only national park area set up to protect a historic dinosaur quarry. We began at the Visitor Center and took a shuttle up to the Quarry Exhibit Hall. 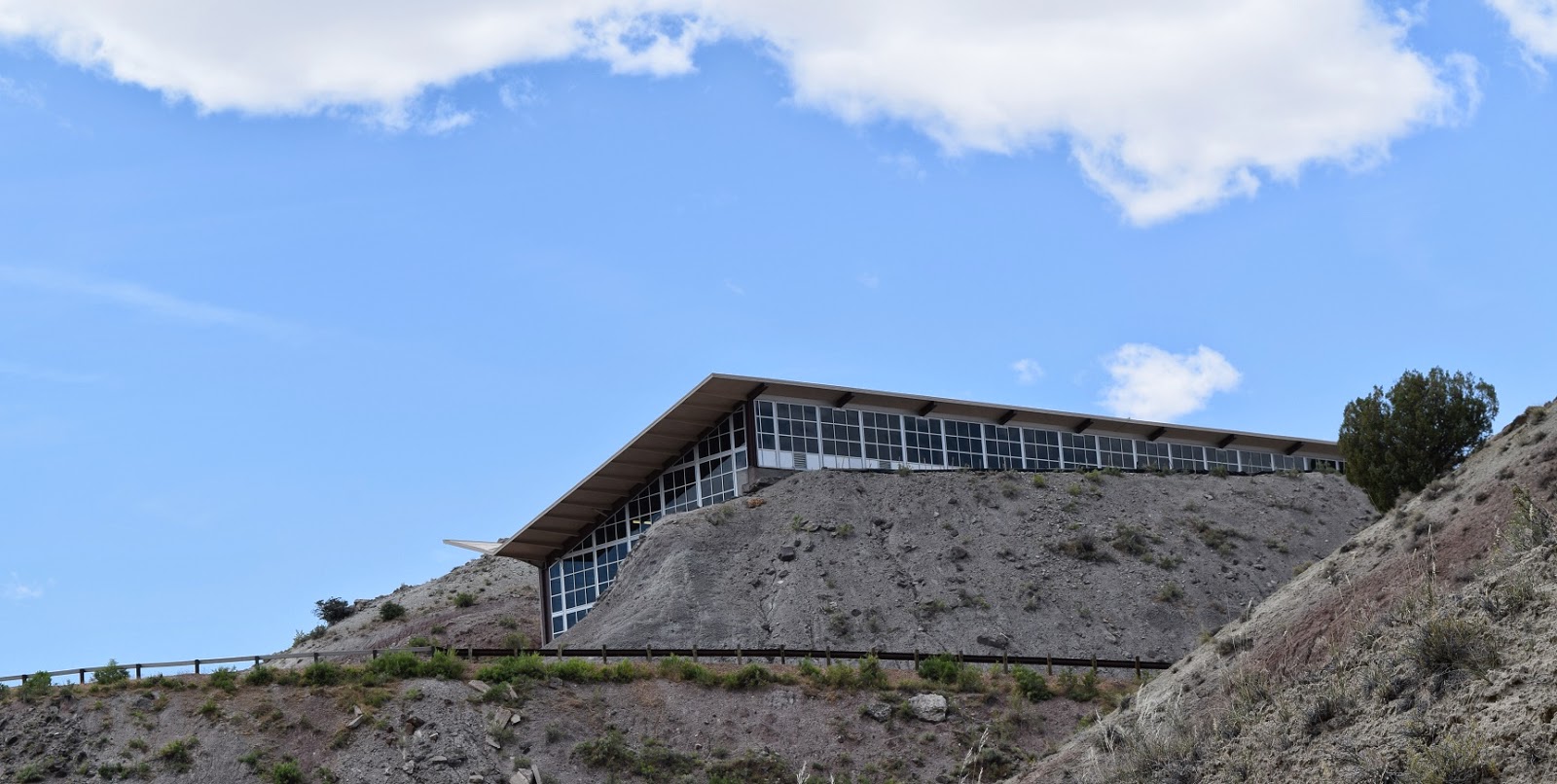 At the Exhibit Hall we were able to view a wall of approximately 1,500 dinosaur bones. In some areas we were allowed to touch real 149 million-year-old dinosaur fossils. We spent quite a bit of time picking out different fossils as we took in the wall. 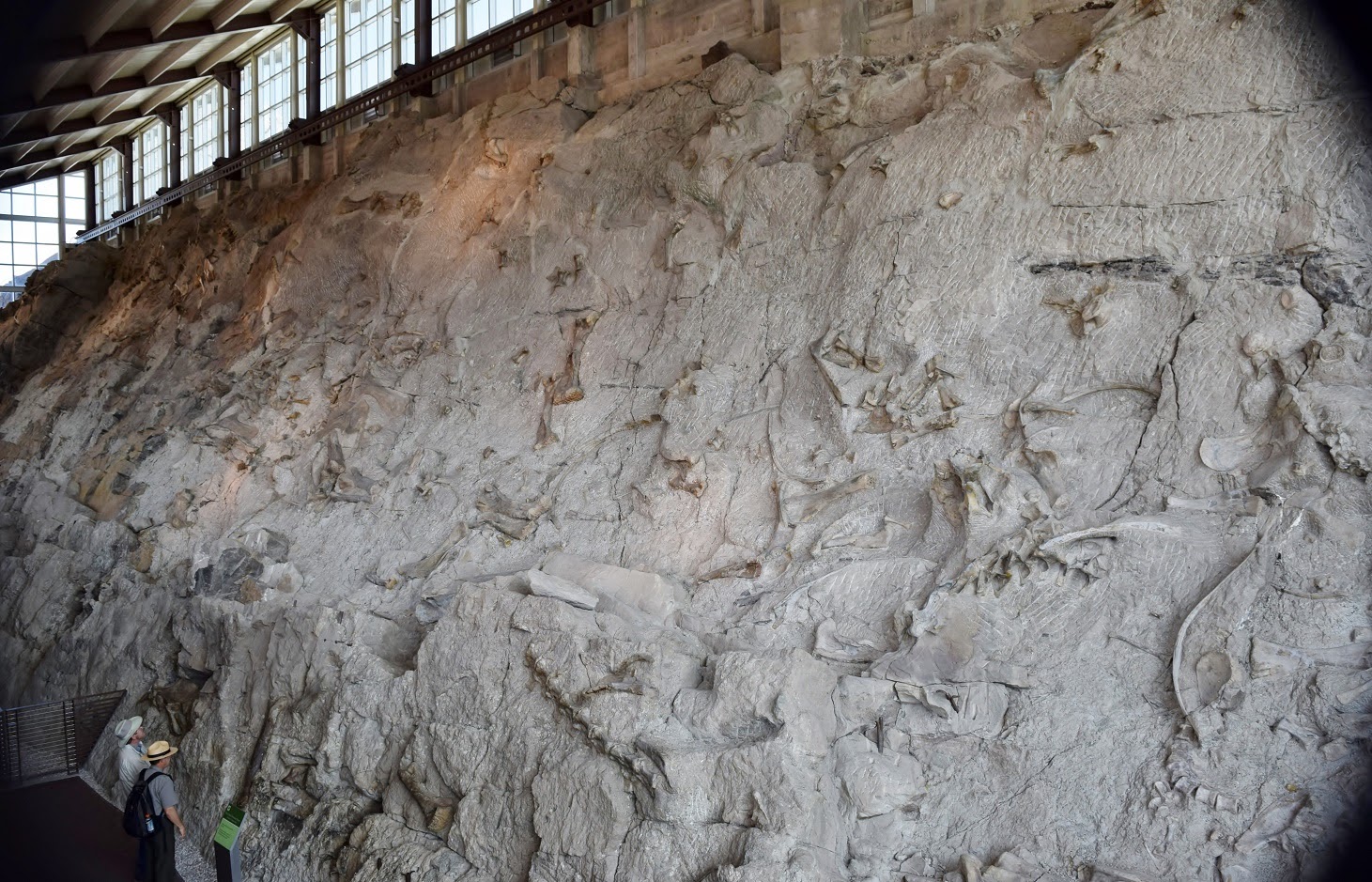 Some were obviously vertebrae, some leg bones, some skulls and many that we had no idea what they were but they were still pretty impressive. 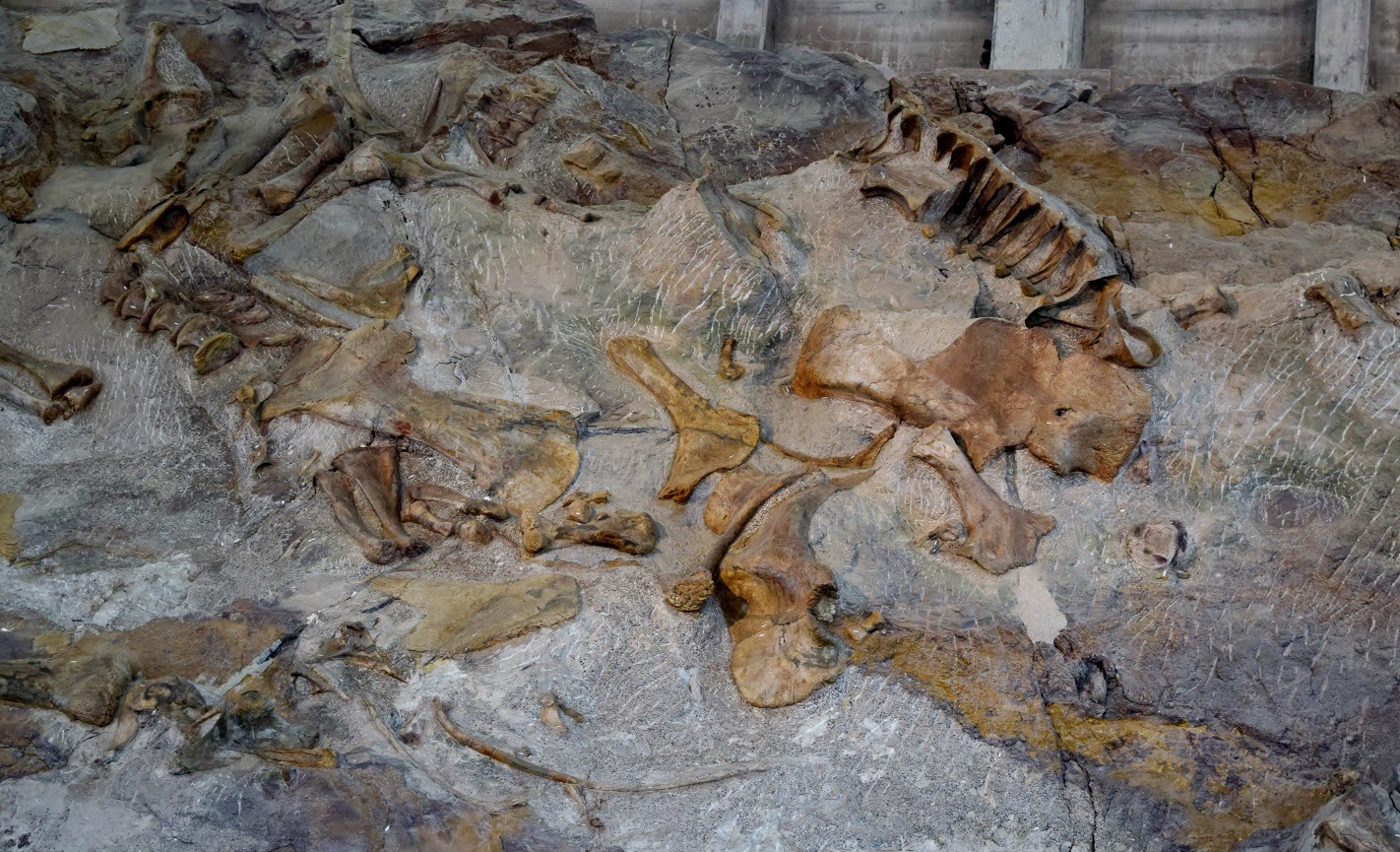 To us, these bones looked kind of like a person comforting a seal or dog. Use your imagination. 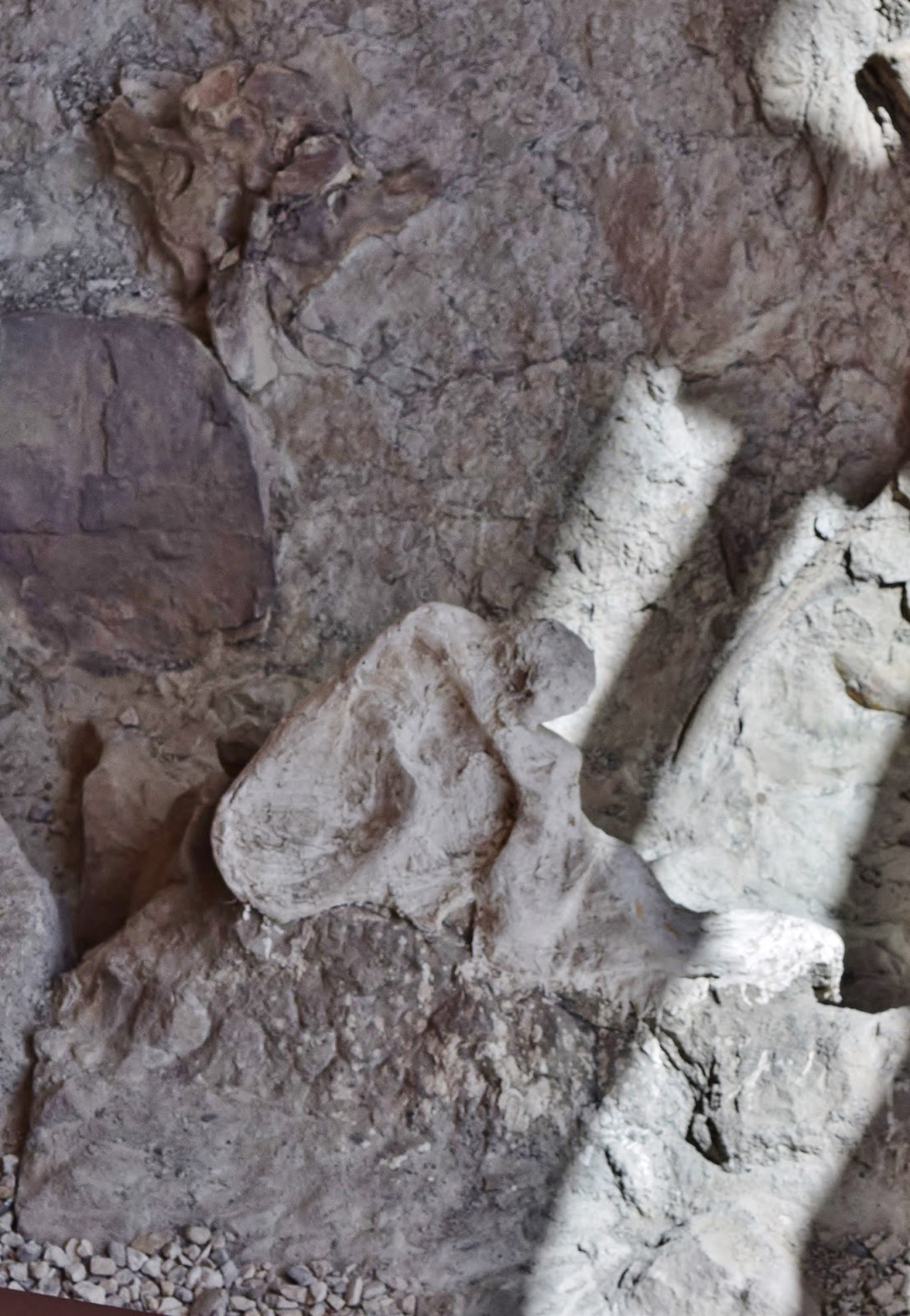 In addition to the wall there were some very interesting exhibits. Brian is standing next to a dinosaur leg bone (don't ask me to get any more specific than that - beyond my field of expertise). 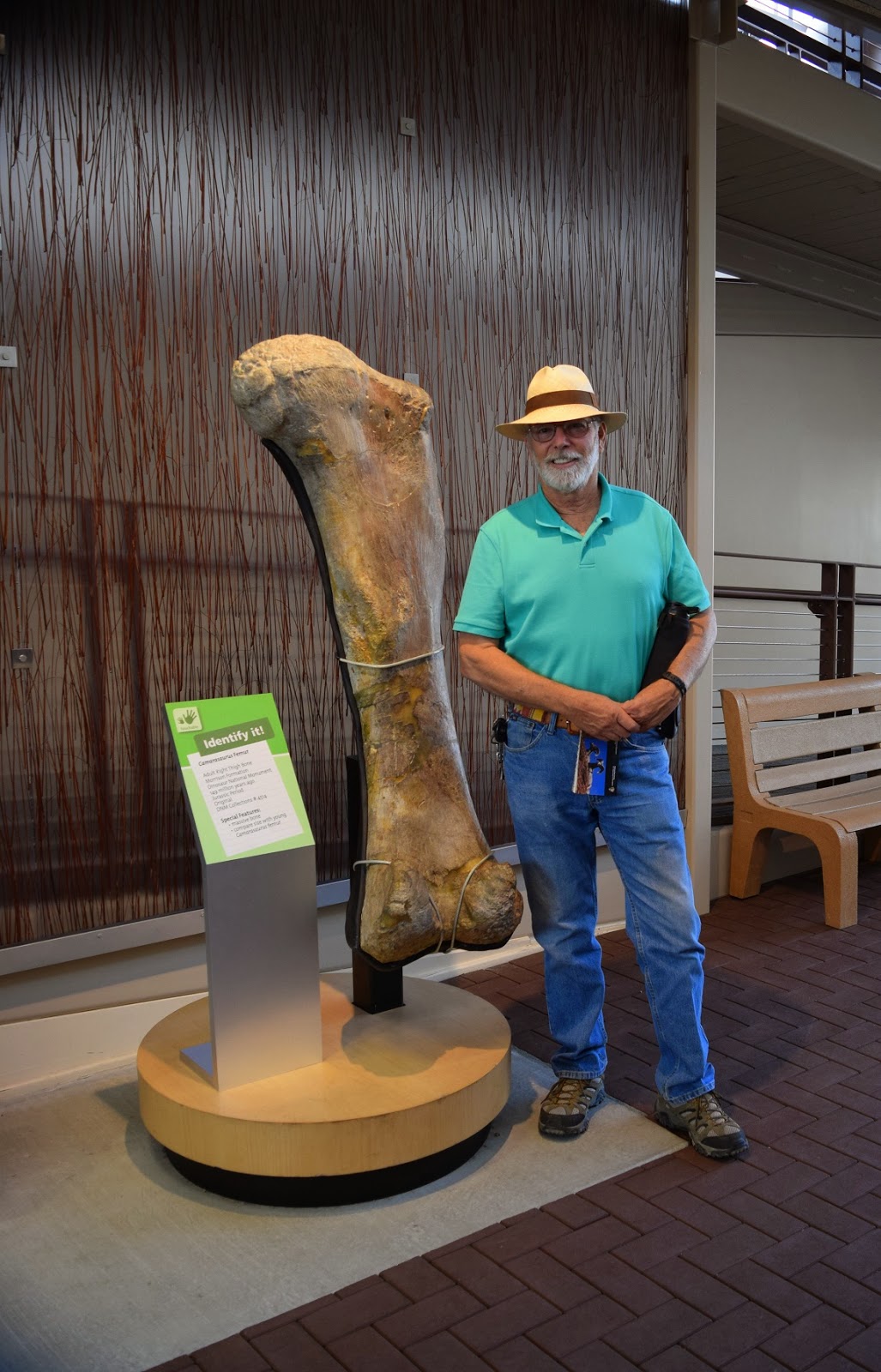 There were several casts of dinosaur bones that have been excavated here. Many of the original bones now reside in the Carnegie Museum. Paleontologist Earl Douglass began excavating these bones in 1909 and cataloged and shipped them to the museum. It's hard to imagine what a thrill this find was for him and his associates. 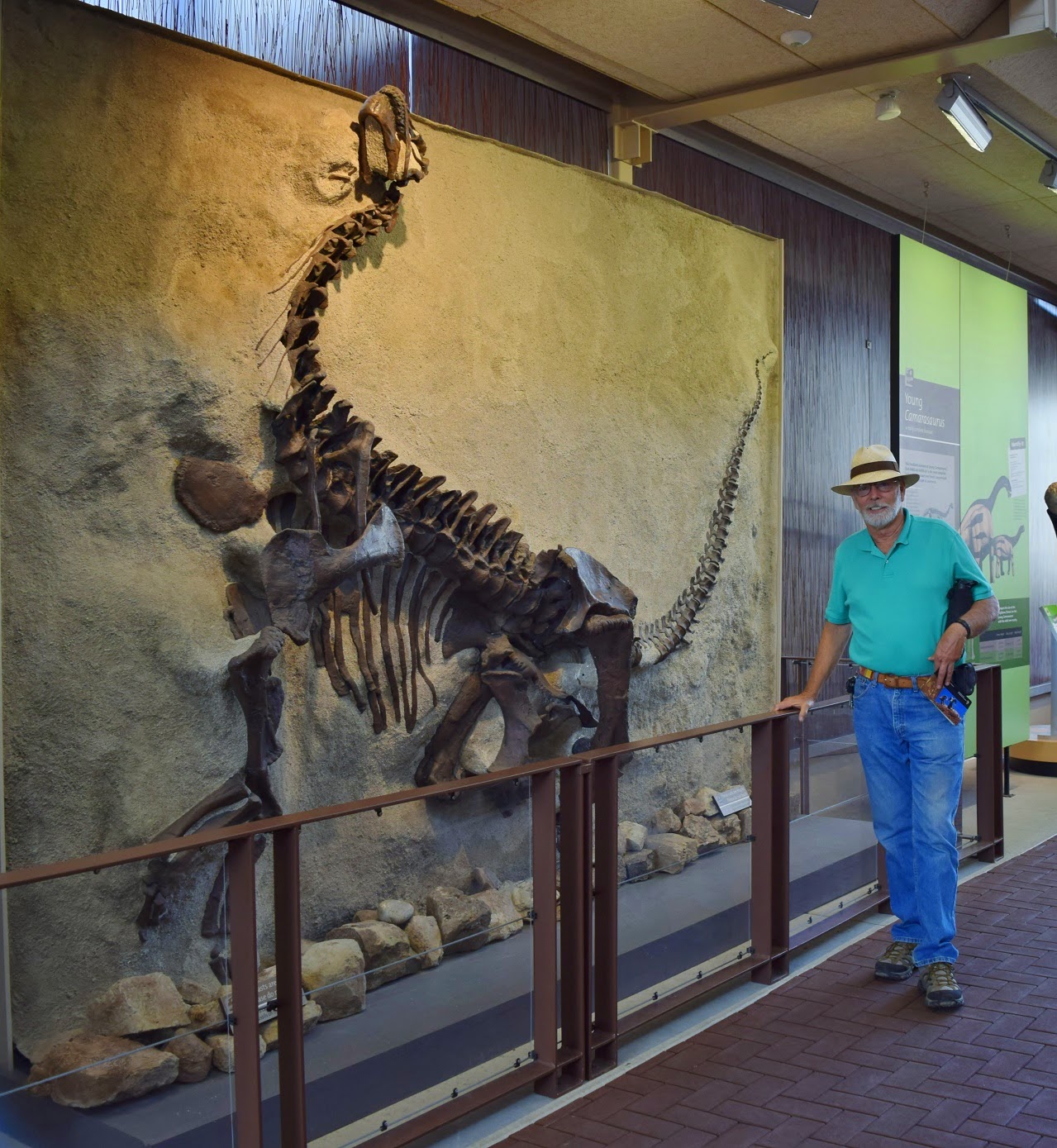 I particularly enjoyed the murals that depicted what life must have looked like for these dinosaurs 150 million years ago. 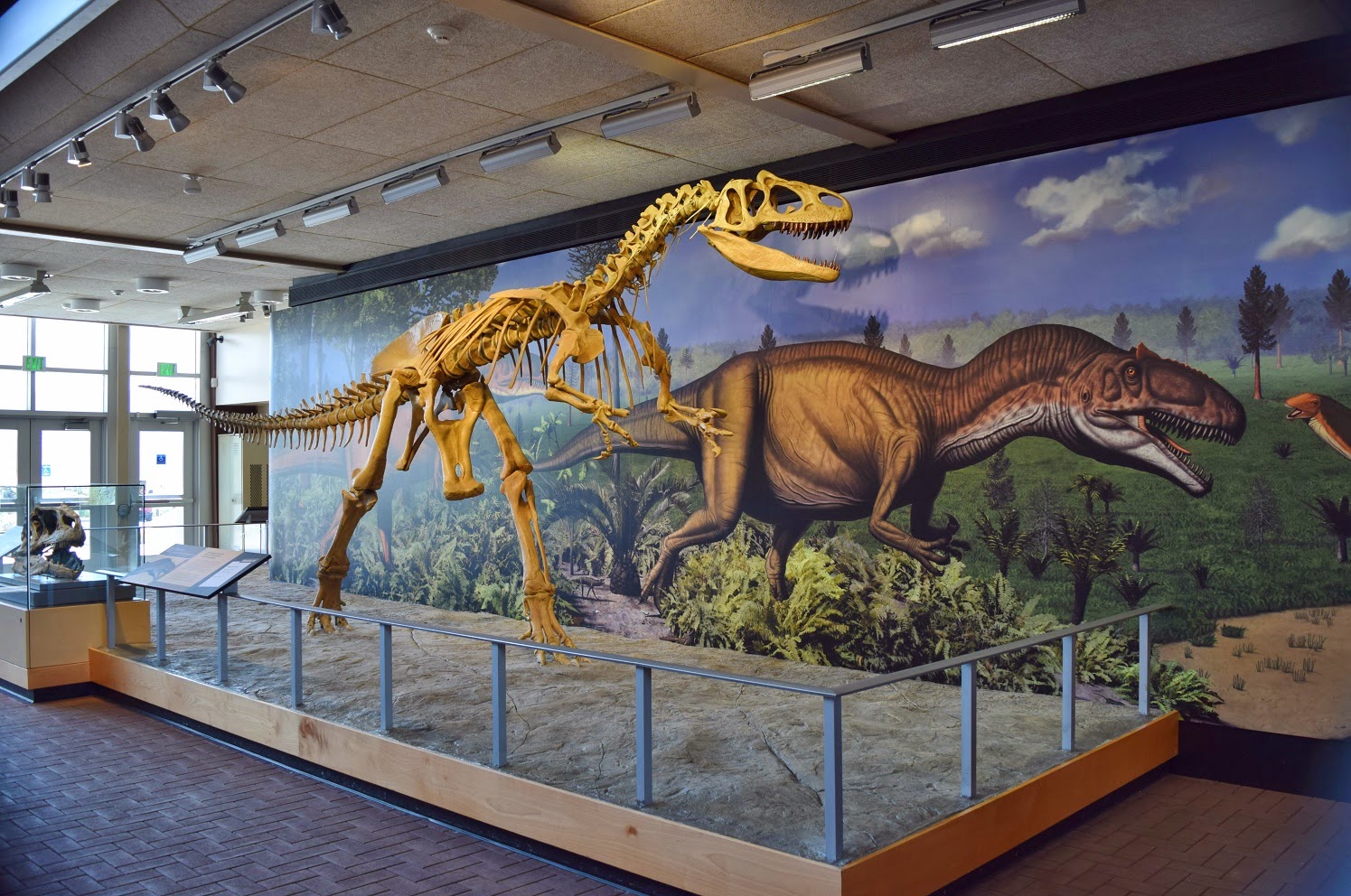 Instead of taking the shuttle back to the Visitor Center we hiked down the Fossil Trail which wound through some stunning scenery. 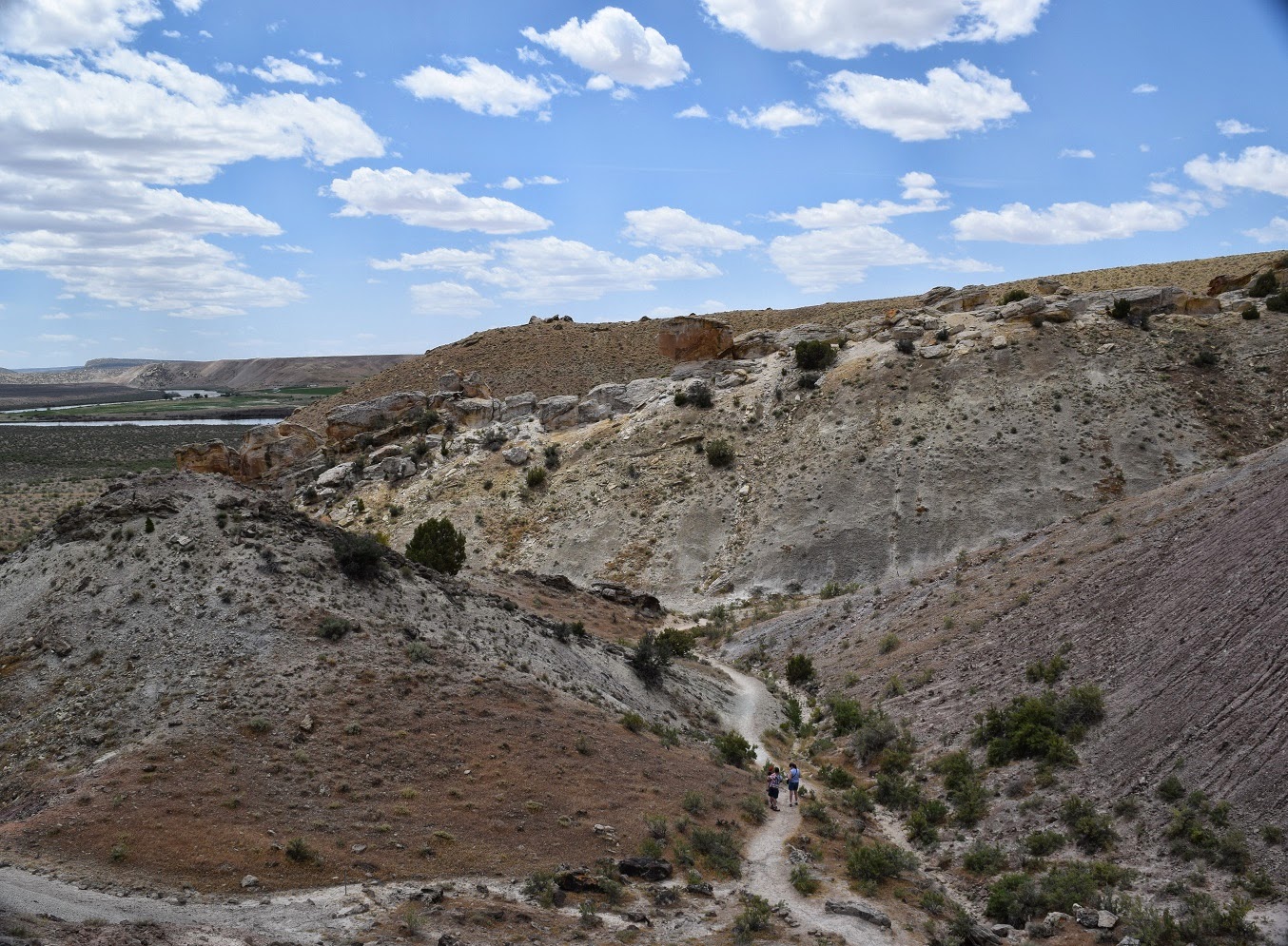 This rock formation is part of the same wall that has been excavated at the Quarry Exhibit Hall. There was no indication of when or even if it will be excavated as well. 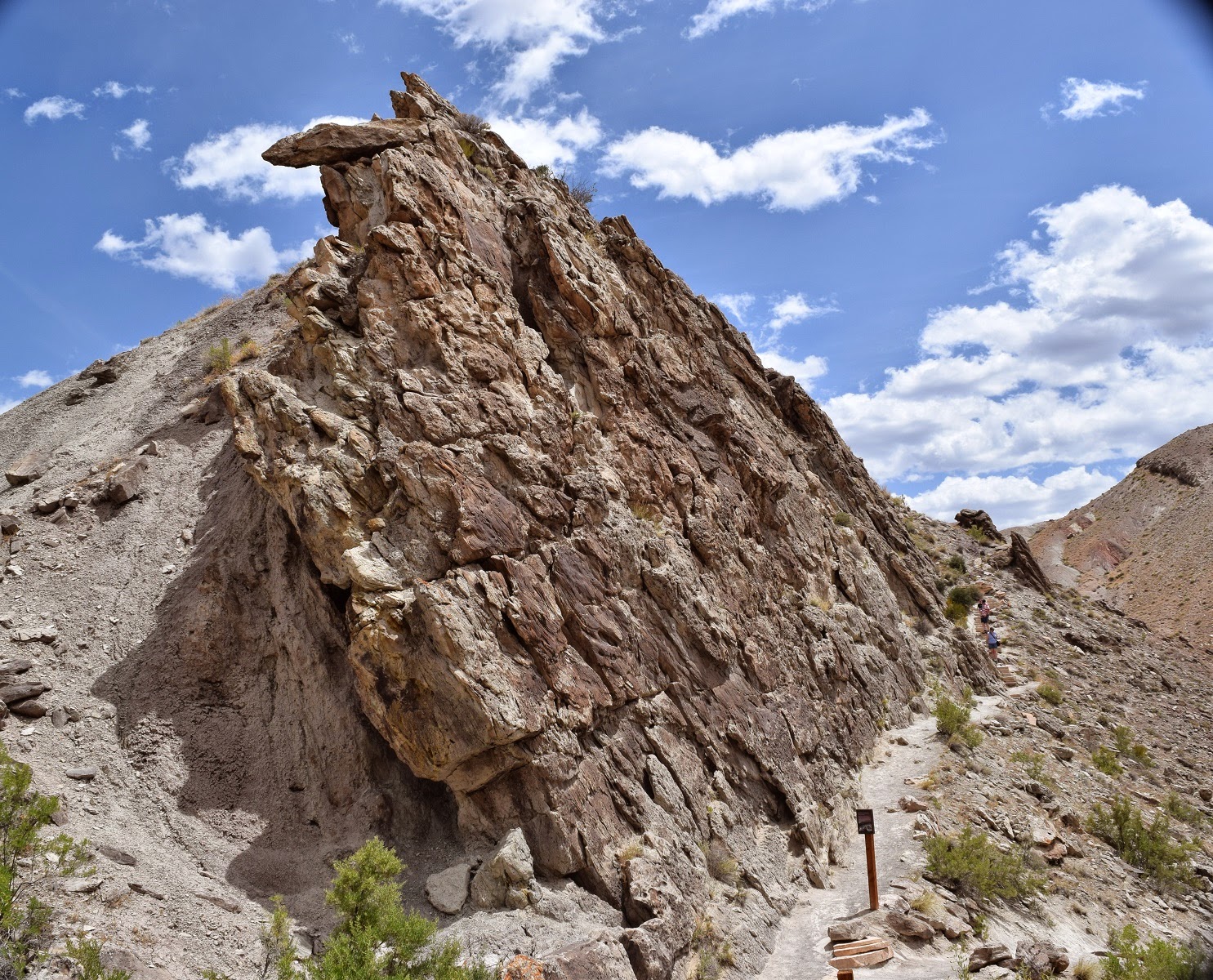 Dinosaur National Monument's cultural history dates back at least 10,000 years. Indian rock art in the form of petroglyphs and pictographs reveal evidence that many people had come before Spanish explorers and then settlers from Europe and the eastern United States. The Fremont Indians lived in the canyons 800 - 1,200 years ago and were followed by the Ute and Shoshone.
Following our hike we took a drive through the park where we saw many petroglyphs that are at least 1,000 years old. I still think they look like spacemen. 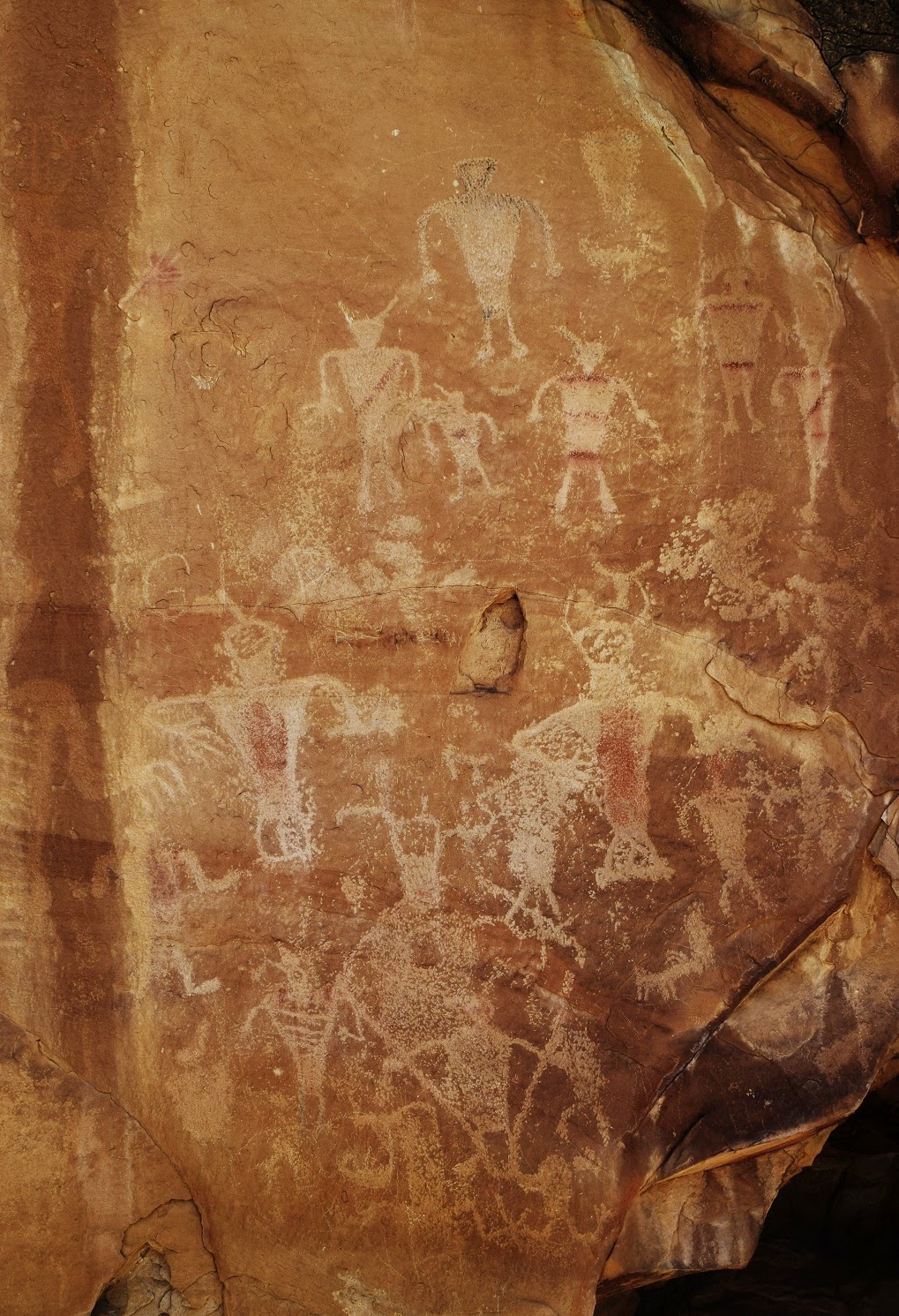 The remains of a cabin and homestead belonging to woman named Josie Bassett Morris are in the park on Cub Creek. After being married 5 times she decided she wanted a place of her own and chose a spot where she could be self-sufficient. The spot she chose had plentiful water and pasture for her to grow vegetables and raise cattle. She lived there for 50 years until she died in 1964 at the age of 90. She was on her own but had frequent visits from her children who lived in Vernal. 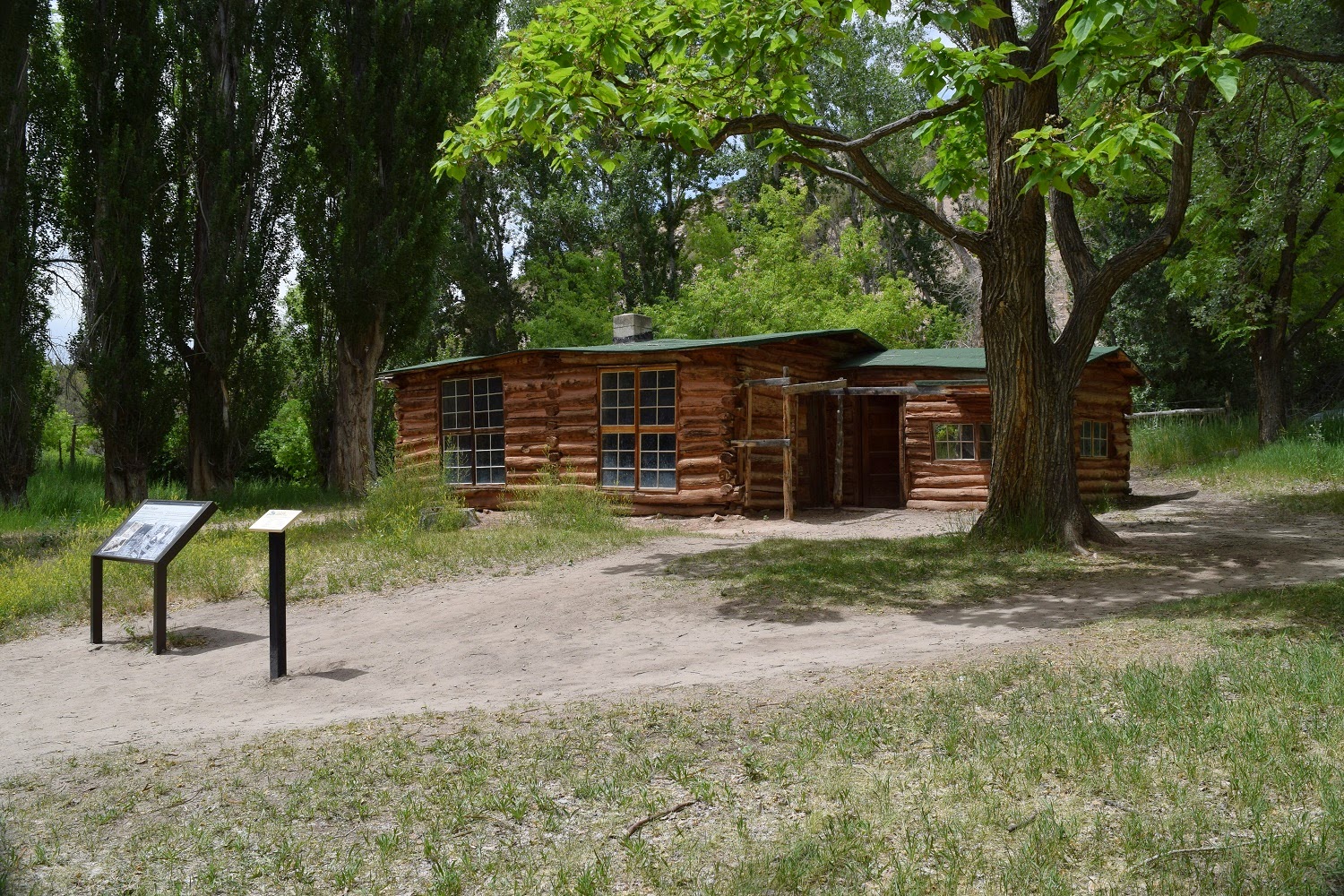 It was a lovely spot but so remote - talk about the independent pioneer spirit!

Our route from Longmont to Vernal was a total of  330 miles. Along the way we stopped for the night in Steamboat Springs which was 200 miles from Longmont.