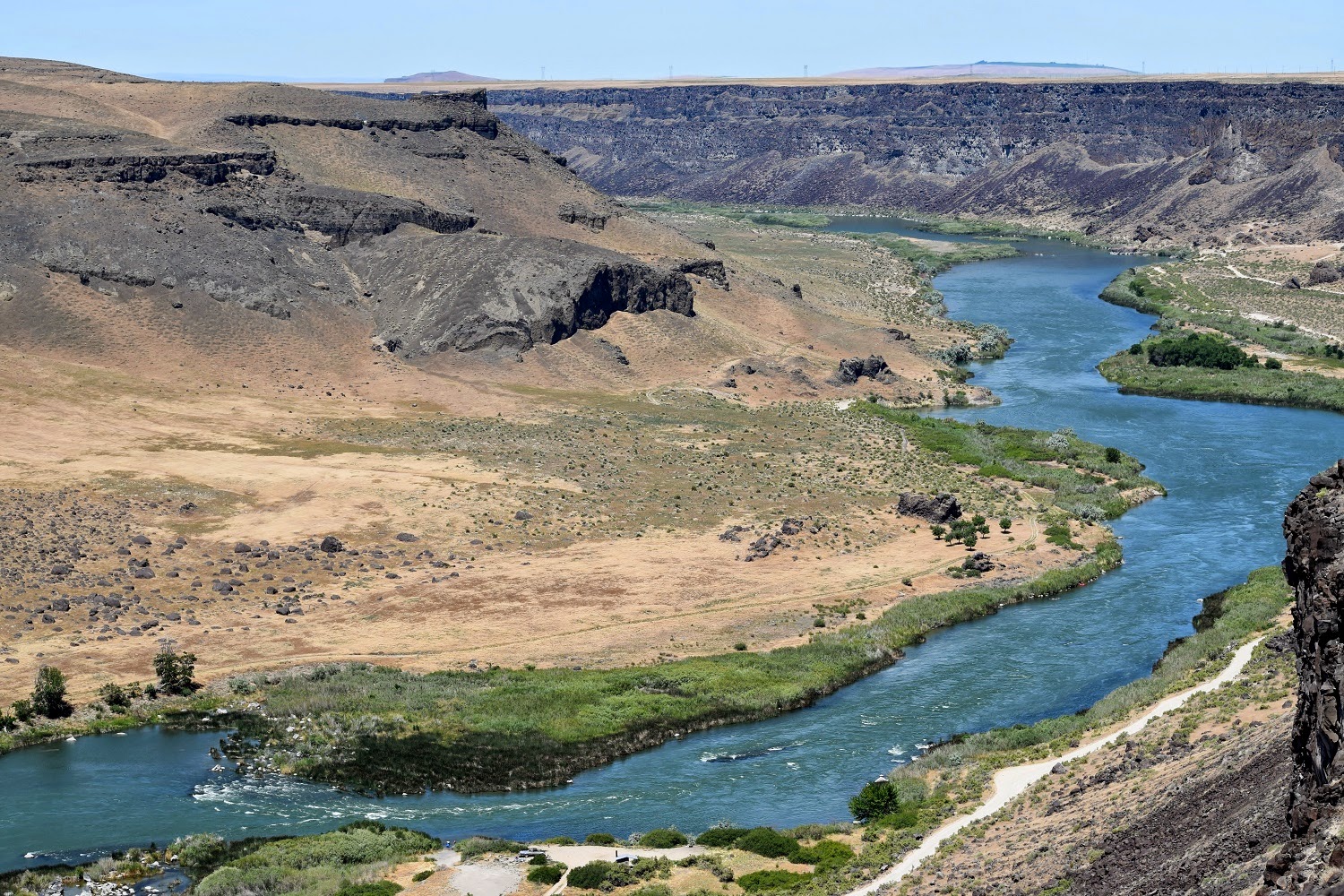 While looking for some alternative routes on our way to Washington, Brian noticed an area on the map called the Morley Nelson Snake River Birds of Prey National Conservation Area. Sounded interesting. Further investigation showed that it has the largest concentration of nesting birds of prey in North America, and perhaps the world. The steep craggy cliffs and a plateau rich in ground squirrels and rabbits make this area a perfect place for raptors, birds of prey that feed on other animals. Over 800 pairs representing 24 raptor species return to this area to mate and raise their young every year. It encompasses an area of 600,000 acres.

The first stop on our day trip was the Peregrine Fund's World Center for Birds of Prey. It was a fascinating place and we learned a lot. They are rightfully very protective of their raptors so all of my photos were shot through wired or barred enclosures.
The Center isn't a zoo and its primary mission isn't the rehabilitation of raptors but rather the propagation of critically endangered species. Their propagation program played a critical role in the successful recovery of the Peregrine Falcon, which was removed from the U.S. Endangered Species List in 1999. It currently breeds endangered California Condors and Aplomado Falcons as well as other raptors. 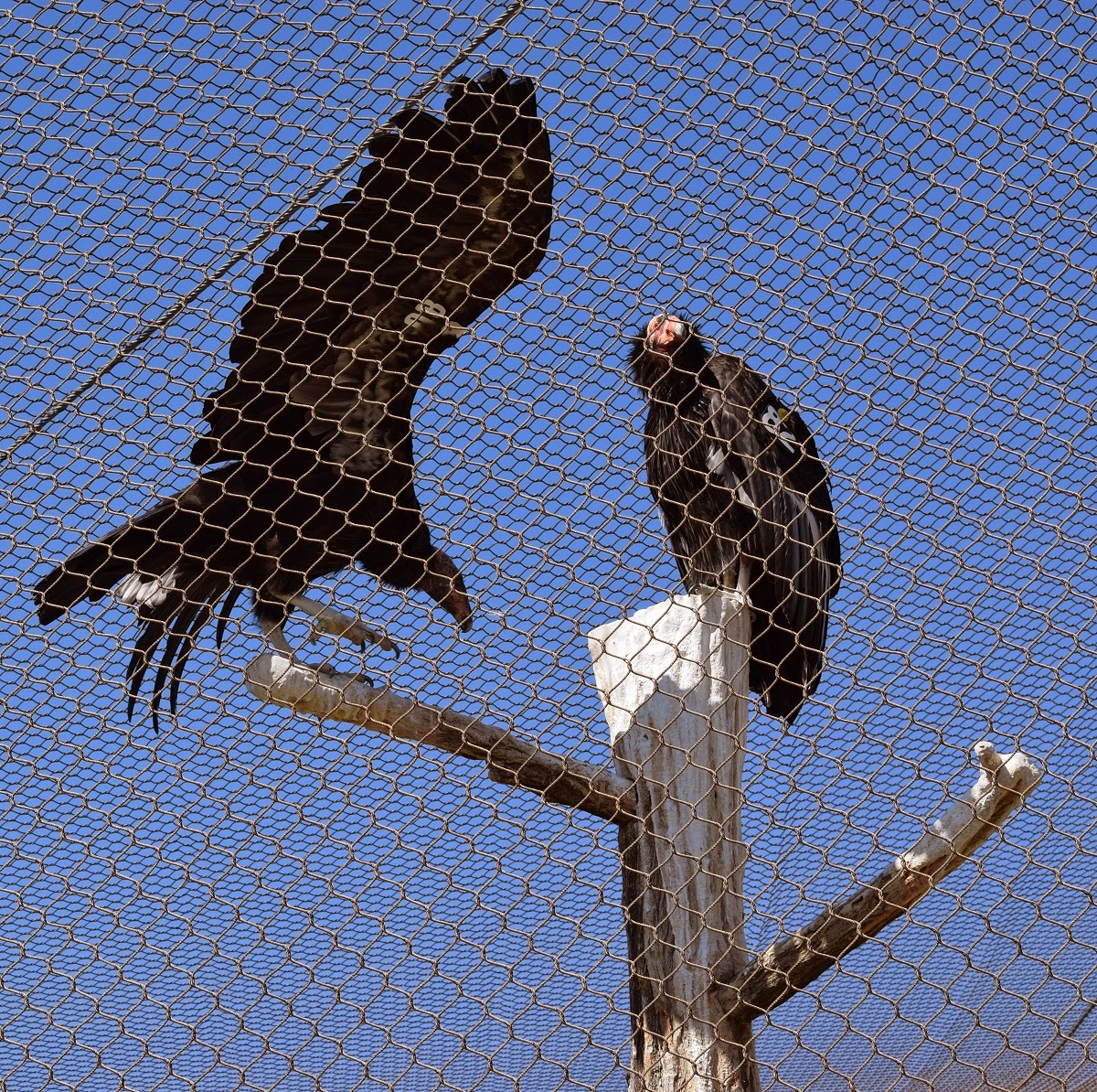 The first raptors we saw were two male California Condors. It's hard to get a sense of their size from my photos but they are massive. They're the largest flying birds in North America. They have an average wing span of 9.5 feet and weight between 17 and 22 pounds. The two below got into a little tiff while we were watching. Scary. 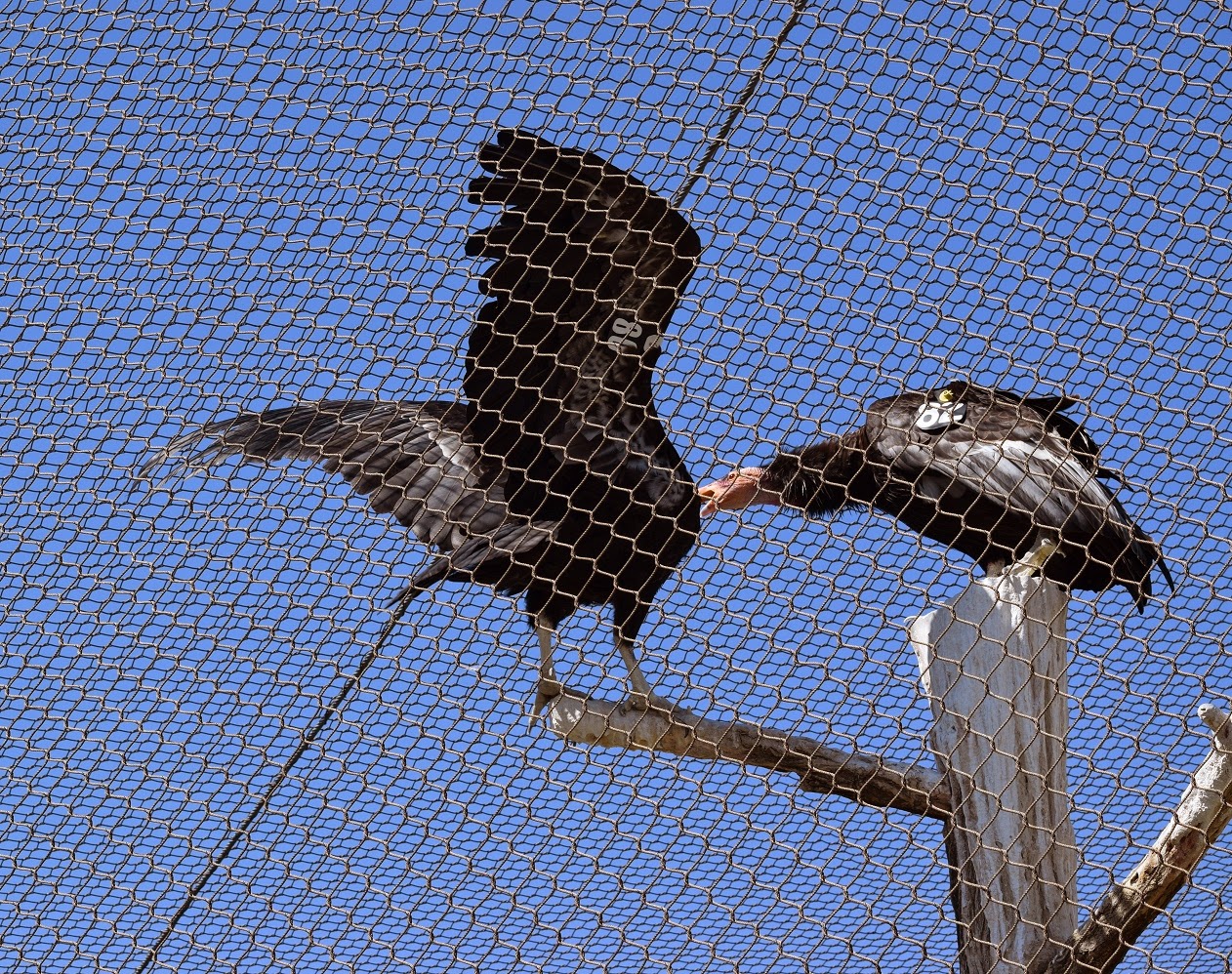 California Condors are also  the most endangered birds in North America.  In 1982 only 22 of them remained. All were placed in captive breeding programs. The World Center breeds more of them than any other facility and each year many of their young are released near the Grand Canyon. It produces enough young birds each year to establish self-sustaining wild populations of this rare species.

In 2008, The Peregrine Fund held the first conference of its kind to explore the potential effects of exposure to lead from spent ammunition on wildlife and humans. The conference grew out of The Peregrine Fund's experience with California Condors, which were becoming sick and dying of lead poisoning after scavenging on animals killed with lead ammunition. Peregrine Fund research showed that hundreds of tiny fragments of lead could disperse widely through a deer, raising concerns about health effects on both humans and wildlife. The effects of lead on the Condors has lowered their lifespan from 60 years to 6 years. Tragic. I was going to comment more on that but I think it speaks for itself.

There were other raptors we were able to view while at the Center. For one reason or another they were being protected and were not out  in the wild. We saw a Bald Eagle, so majestic, a Peregrine Falcon,  the fastest creature on earth, 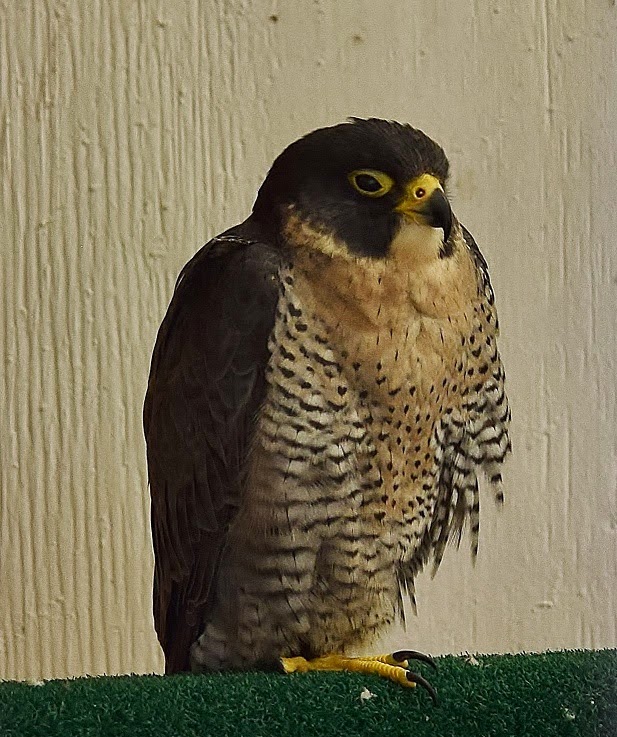 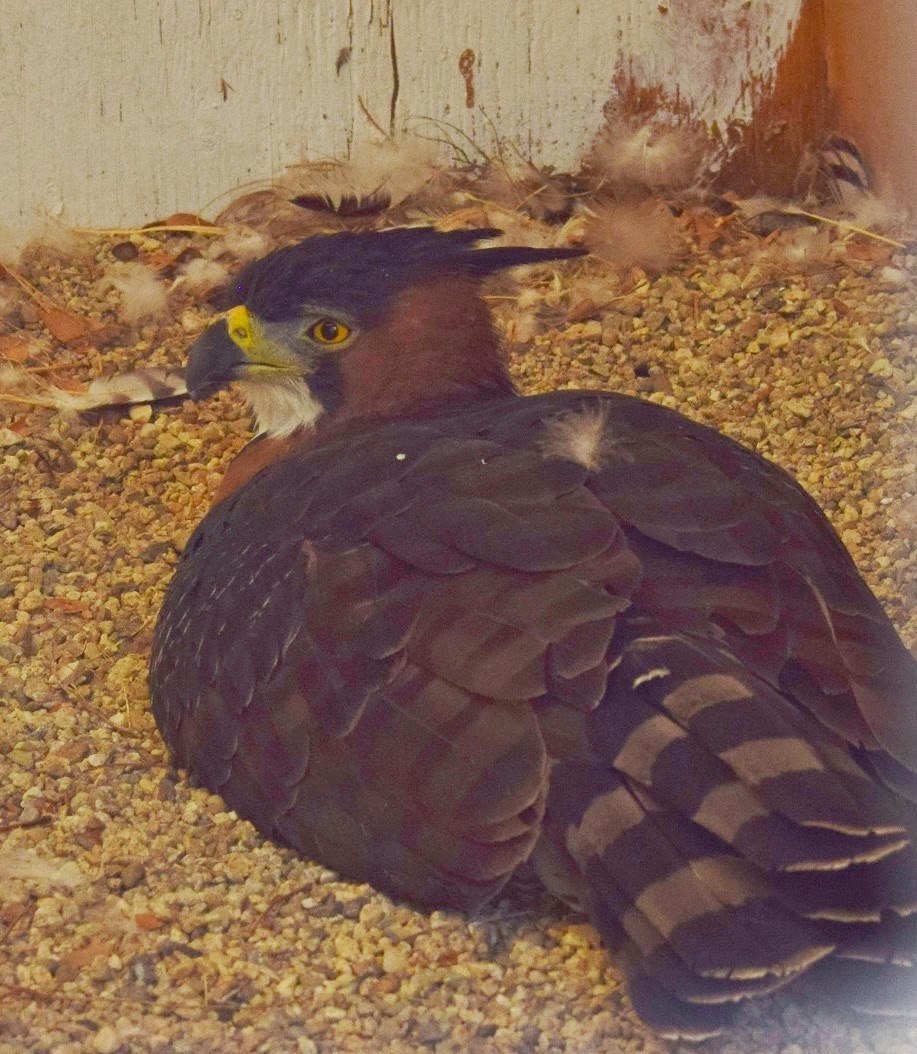 and a Bateleur Eagle 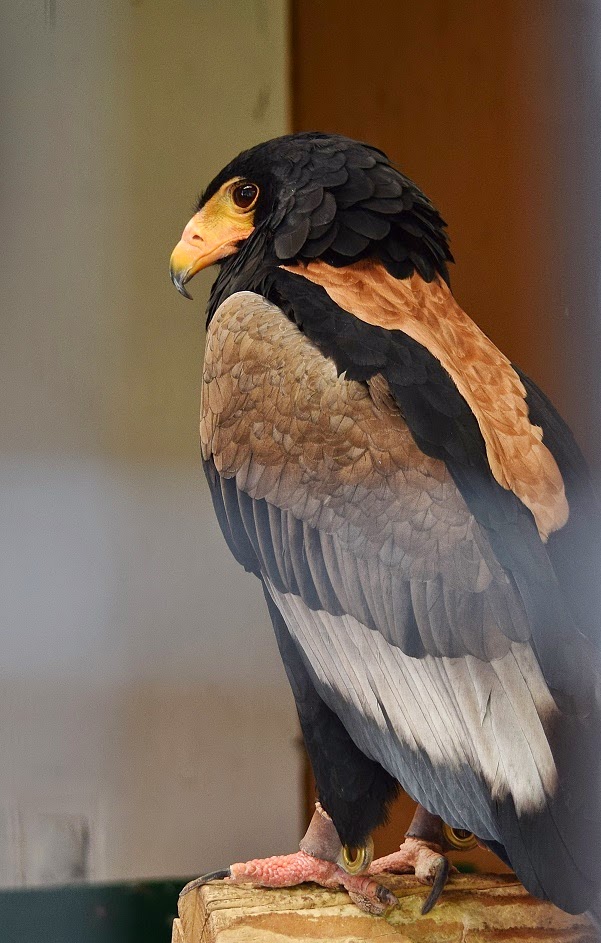 as well as many other raptors that I had never heard of. Pretty cool place to visit and they have a really great website detailing more of their good works at   http://www.peregrinefund.org/index.php   It's worth the time to check it out.

After our visit to the World Center we took the loop drive through the Birds of Prey Conservation Area. While it was a nice drive we didn't see any raptors in the wild, only some nice scenery. The best time to go would have been in the early morning or late afternoon but our timing was off. Nevertheless we had a great day. More information on The Morley Nelson Snake River Conservation Area can be found at
http://www.blm.gov/id/st/en/prog/blm_special_areas/birds_of_prey_nca.html

Our route from Vernal to Caldwell, Idaho with a stop in Snowville (?, no snow although we saw some in Park City) Utah was 553 miles 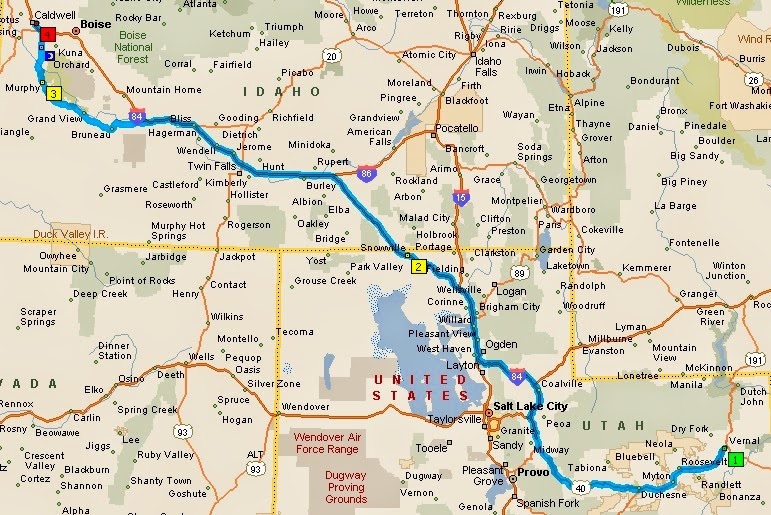 We stopped for lunch at a Historic Monument along the way which was an Utter Disaster, just like the sign said. 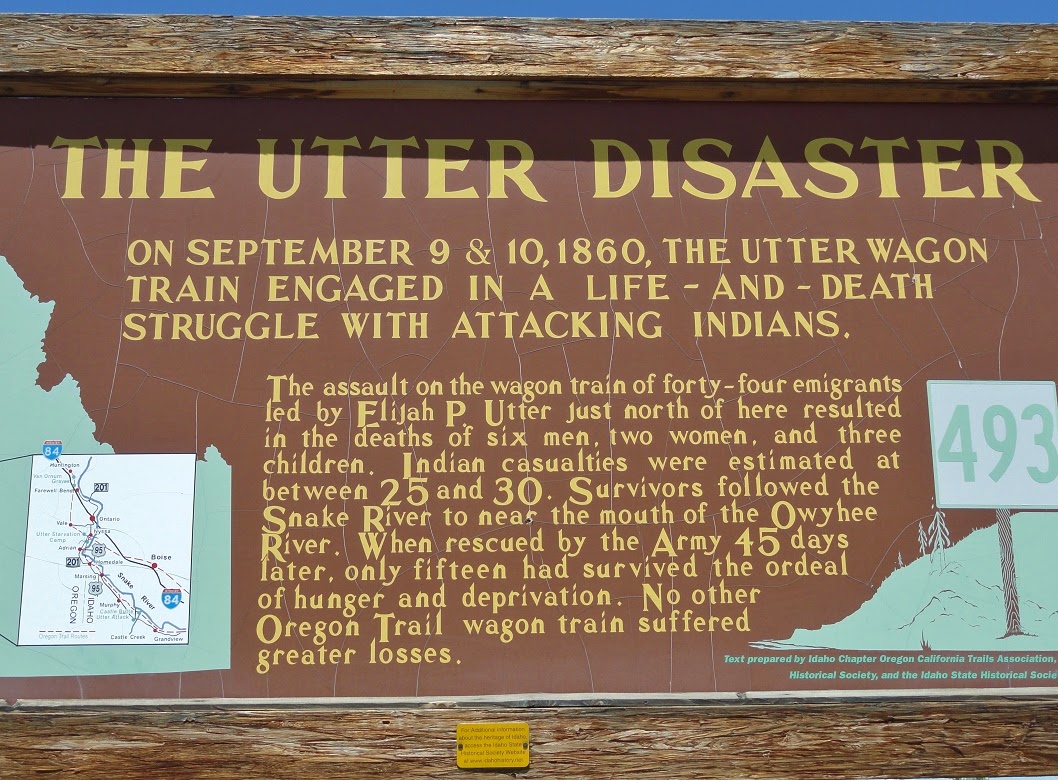 Evidently a wagon train led by Elijah Utter was attacked near that spot and there was the greatest loss of life on the Oregon Trail resulting in an Utter Disaster. Who knew.

Our route on the loop from Caldwell to The World Center for Birds of Prey and then through the Morley Nelson Snake River Birds of Prey National Conservation Area was 115 miles. 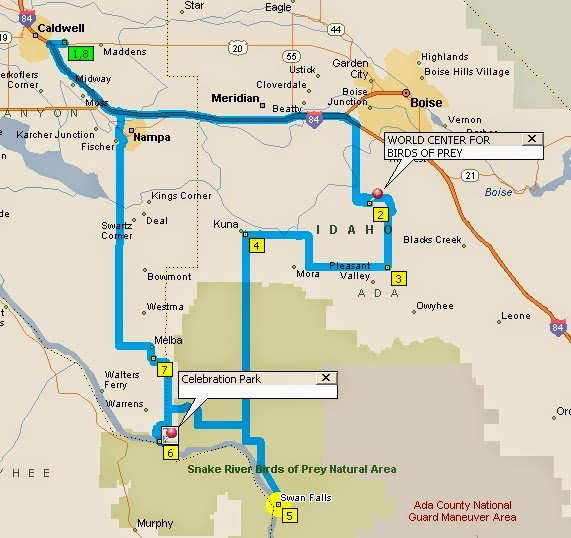