When we left Minnesota we headed for Toronto where my niece, her husband and three children live. Our route took us across the Upper Peninsula (U.P.) of Michigan, a new place for us. The drive was very scenic with lots of land and few people. An interesting fact is that the Upper Peninsula contains 29% of the land area of Michigan but just 3% of its total population. The residents are frequently called Yoopers (derived from 'U.P.-ers')
The U.P. is connected to the rest of Michigan by the Mackinac Bridge. We didn't think we would have an opportunity to go over the bridge but we did. A bracket on our front window shades broke and we had the replacement part overnighted to Sault St Marie.  Unfortunately it ended up in Alpena, 150 miles away. We got in the car and made a mad dash to pick it up. Since we had commitments in Toronto we really didn't have much choice - nice to go over the bridge but not the best of circumstances. All worked out well, though.

We stayed a few nights at the Elks Lodge in Sault St Marie, or The Soo, which was close to our border crossing into Canada. We had a great spot where we could watch the huge ships coming and going with their cargo. Of course this led us into learning about the Soo Locks (especially Brian, who is always inquisitive regarding these things). Over one million people visit the Locks every year. 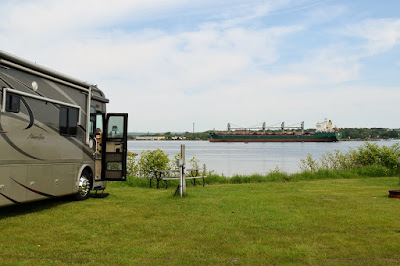 The Soo Locks connect Lake Superior and Lake Huron. The first State Lock was built in 1855. Up until then, explorers, fur traders, and Native Americans portaged their canoes and cargo around the rapids of the St. Marys River, the only water connection between Lake Superior and the other Great Lakes. There is a section of the river known as the St. Marys Rapids where the water falls about 21 feet from the level of Lake Superior to the level of the lower lakes. This natural barrier to navigation resulted in the construction of the locks in a project known as the St. Marys Falls Canal.
In the photo below the rapids can be seen on the left, the Locks on the right.

There are now two locks which are operated by the Army Corps of Engineers. New locks are planned to be built and have been approved by Congress but funds haven't been allocated yet.
Each year there are approximately 10,000 'lockages' hauling 86 million tons of cargo. The main cargoes that move through the Soo Locks are taconite (iron ore) and coal going from Western Lake Superior to ports on the lower lakes.  Other common cargoes are grain, limestone, and salt. Occasionally there are foreign ships bringing in windmill parts headed for ports on Lake Superior. Some other examples of Great Lakes shipping through the Soo are iron from the western Superior Iron Range in Minnesota, Wisconsin, and Canada to steel mills in Illinois, Indiana and Michigan, and coal from Pennsylvania and Ohio going to the steel mill in Sault St Marie, Ontario from Duluth for Detroit Edison. 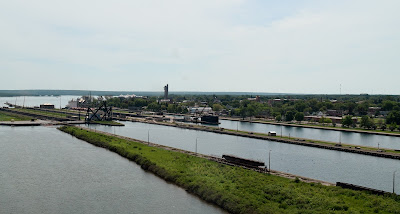 The Locks can be seen in the above photo. Both locks operate in both directions and can either raise or lower boats.  The size of the boat determines which lock it will use.  Boats larger than 730 feet long and 76 feet wide are too big for the MacArthur Lock (on the left) and must use the Poe Lock. Boats heading into Lake Superior from the lower Lake Huron Level are described as being upbound and will have to be raised up 21 feet at the Locks.  Boats going the other way, from the higher Lake Superior level going towards Lake Huron must be lowered down 21 feet at the Locks and are described as being downbound. The locks are closed from January to March each year while boats are in port. At this time repairs and maintenance are done on the locks.
There is a lot more information along with a webcam on the following website maintained by the Army Corps of Engineers  http://www.lre.usace.army.mil/Missions/Recreation/SooLocksVisitorCenter.aspx 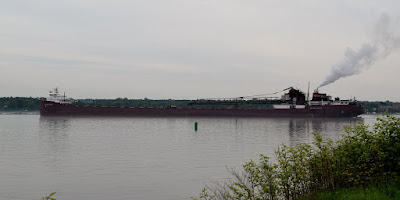 Some of the ships we saw were really huge. The largest boat on the Great Lakes is the Paul R. Tregurtha which is 1014 feet long and 105 feet wide, longer than three football fields. The Tregurtha's capacity is 68,000 long tons of iron ore or 63,616 long tons of coal. It has a discharge boom that can be swung 100 degrees to port or starboard. It's capable of unloading at a rate of 10,000 long tons of iron ore per hour, or 6,000 net tons of coal per hour
It's amazing how quickly they move the ships through the Locks. From the time a ship approaches the Lock until the time it leaves takes between 40-60 minutes.  Once it is secured inside the lock it takes 15-20 minutes to raise or lower the boat 21 feet (just over a foot a minute).

The Locks are truly an incredible engineering feat and one we just stumbled upon. Love it when that happens.