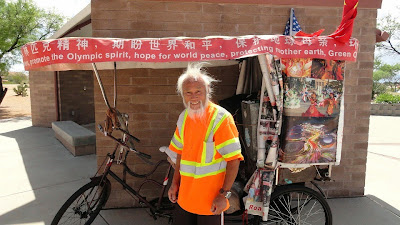 We left Fountain Hills on May 2, heading to Flagstaff for our first stop. On the way there we pulled into a rest area and saw this gentleman pushing his rig up the hill into the rest area.  His name is Chen Guan Ming. He didn't speak English but he allowed us to look at his set-up and take his picture. I can't imagine how he manages to travel like this, but he's put on some miles. There was a bit of information on the back of his rickshaw. The sign says he's gone 140,000 km since 2001. 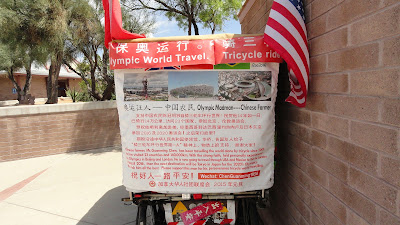 He also gave us a card which was in English. He has someone who set up a couple of websites about him that are in English.
The websites are at http://www.chenolympicrickshaw.com/  and  http://www.bryanjames.co.uk/chen-guan-ming/
Both of these websites are really interesting and tell the story of a pretty amazing man. Here's a short excerpt -

At the Beijing games in 2008, a whole nation was inspired by the Spirit of the Olympics. So much so that one man, Chen Guan Ming, rode 800 kilometres from his home to the Bird’s Nest Stadium in his ageing rickshaw.
But while 800 km might seem like an impressive feat to some, Chen had an even bigger goal in mind. So, on May 23rd, 2010, he gathered his possessions, hopped back into his rickshaw and started a mammoth two year journey to London! Passing through 16 countries including Tibet, Iran, Greece and France, Chen arrived in London on July 9th 2012 to be welcomed by… Nobody.
Update – January 15th 2015
Chen has reached the town of Bellevue in Washington State, just East of Seattle as he proceeds down America’s West Coast towards Rio 2016. However we understand that Chen plans to cross America to New York and Washington before heading too far South and as anyone who knows Chen will realise, he will do exactly what he wants to do.

Pretty fun to come across someone like this. We gave him a donation and wished him well - we hope he makes it to the Olympics in Rio!

Our route from Fountain Hills to Flagstaff 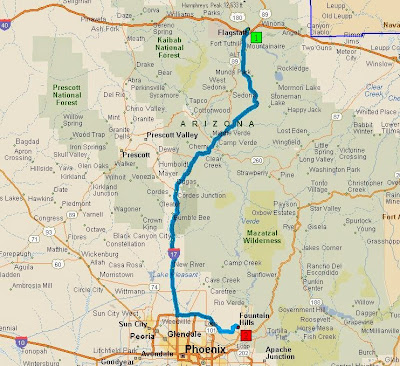