In addition to our beach time we've found other things to keep us busy in Paamul. We've been diving and seen lots of marvelous things - turtles, rays, queen angels and triggers, eels and a variety of other marine life. We were even fortunate to be able to place some bets on the crab races last Friday. Hermit crabs with numbers on their shells were poured out of a bucket and then the race was on to see which one crossed the rope first. We didn't win any of the races but were worn out by all the excitement. 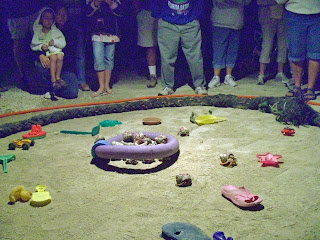 Another Paamul activity is watching the daily progress on the construction of palapas for the RVs. Each one seems to be taller and more elaborate than the one before it. 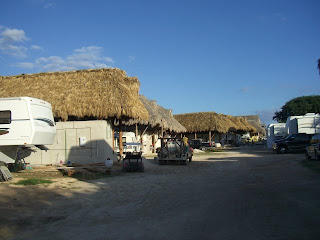 Seeing the different types of RVs that show up here is always interesting. We're quite fascinated with the combination tour bus/sleeping quarters in this bus. The plate on the bus says 'Aleman' which is Spanish for German. We saw one similar to it in Vancouver BC and have found that they travel all over. Imagine the fun of sleeping in a small tube near 30 of your closest new friends. 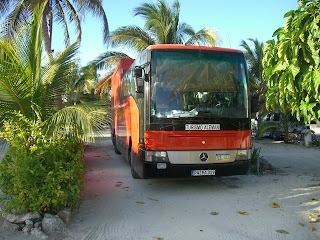 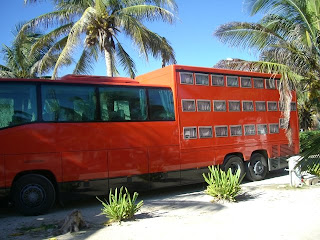 The sleeping quarters are stacked next to and on top of each other - it appears that some of the larger ones get more than one window.