Life Among the Ruins - Tulum and Coba 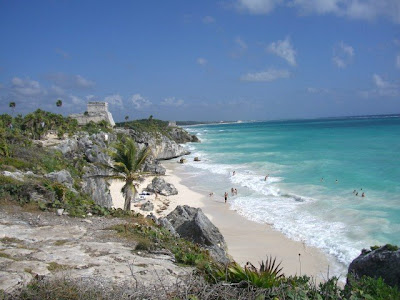 Tulum is one of the most photographed of the Mayan ruins, probably because of its location next to the colorful Caribbean waters. It is an easy day trip from Paamul and we planned it so that we arrived ahead of the heat and the numerous tour buses. After working up a sweat viewing the ruins there's a beautiful beach just below the castle where you can snorkel and cool off. The bay was probably used for trading with people from Central America and as far away as Columbia. 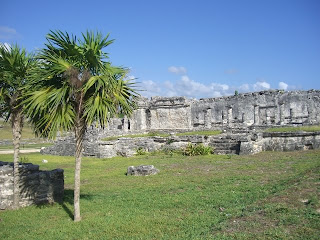 As we walked among the ruins it was easy to imagine the civilization that once lived here. Tulum was a major commercial point in the Yucatan as well as a civic, religious and residential site from approximately 1250 to 1550.


We took another day trip to Coba and though it required more hiking than Tulum we timed it right and went on a cooler, overcast day. Coba was the largest and most important Mayan city in its time, roughly between 200 and 800 AD (gee, can you tell I'm consulting my guide book again?) One of the things that impressed us most about Coba was the road system. The roads are called sacbes, or white roads, and extend up to 62 miles. They are remarkably wide and level and have lasted for centuries. 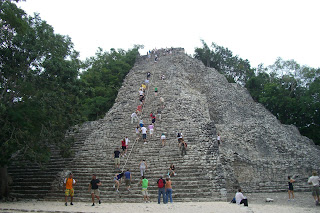 Coba has the tallest pyramid in the Yucatan and it's quite a climb to the top, although coming down is actually more difficult. It's hard to get an idea of the size until you notice how small the people at the top are. 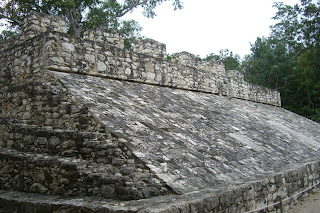 Coba also has a ball court. The base is decorated with depictions of human skulls. The game was similar to soccer and the goal was to put the ball through the stone hole. One story says the captain of the winning team was sacrificed but another story says that the captain of the losing team (and sometimes the whole team) were sacrificed to the Mayan gods. Sounds like lots of fun.
Posted by Sue and Brian at 2:00 PM