After our ferry ride to Port Townsend we spent a few weeks near our friends Judy and Jim, who live on their boat during the summer. They were doing a dock-hosting stint at Mystery Bay State Park and we were able to stay once again at Smitty's RV Park about a mile up the road on Marrowstone Island. 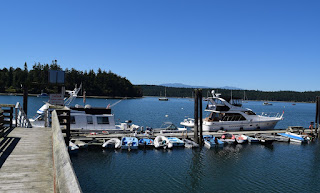 Thanks to Jim and his foraging efforts, we had more crab than we could eat. He kept us well supplied, going out to haul pots in some pretty rough conditions. Judy, Brian, and I tried to do our part by cracking and cleaning the crab. Judy was the chef extraordinaire, making us delicious crab cocktails, crab soup, and crab sandwiches - I even made a few crab omelets. Pretty much a two week crabfest. 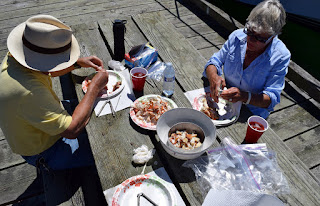 After leaving the Mystery Bay area we worked our way around the Olympic Peninsula. As on previous visits, we were once again astounded by the majesty of the forests and beaches. We stayed near Forks, site of the 'Twilight' movies. The area continues to try to capitalize on this with Twilight tours, and lots of memorabilia.
We went to a festival at La Push, which is on the Quileute Reservation. Salmon was being cooked in the old way, on sticks around a fire. 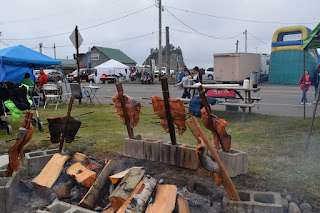 There was a little street fair, a watermelon eating contest and several other events. We walked to the beach but were somewhat restricted on where we could go because they were setting up the fireworks display that would follow the street dance that evening. We passed on those events but walked to the beach which is fairly close to some sea stacks. 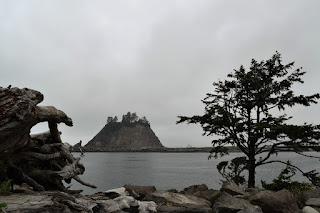 The roots of the trees in this area don't grow very deep into the ground, but spread out instead. Because of that they are more prone to being blown down. The size of the tree stumps and root systems were pretty incredible everywhere we happened to see them in the Northwest area. 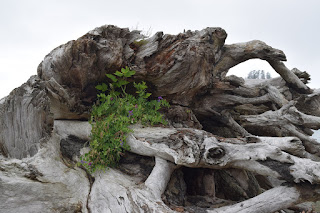 The Quileute Reservation and Olympic National Park are separated by the Quileute River. While we could see Rialto Beach across the river we had to drive back upriver to the bridge that crosses over the river.
Rialto Beach is one of the Twilight movie places which isn't surprising considering how other-worldly it is. 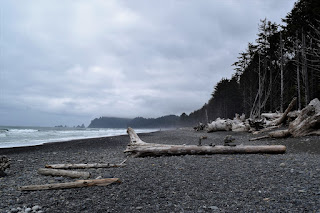 The only bits of color are provided by the trees and people wearing colorful clothing. 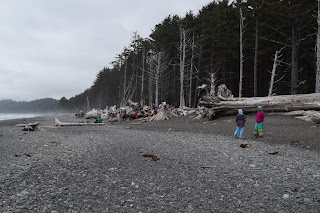 The size of the logs that have washed up on the beaches would indicate that they are somewhere in the neighborhood of a thousand years old. Brian is sitting in some type of twisted tree root in the photo below - if not for his shirt it would be hard to see him. 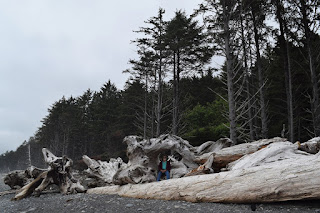 As we were walking down the beach I spotted a couple of men wearing suits - ??? As we got closer we realized it was a wedding party having their photos taken. 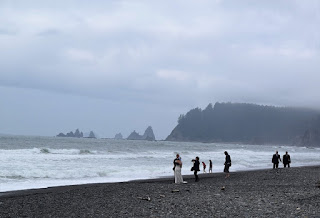 Brian found a nice little beach hut to hang out in but I don't think he was ready to move in. 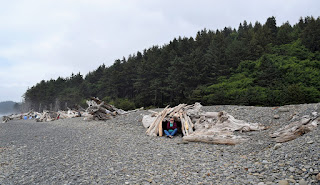 Maps of our route --

Mystery Bay to the Forks area - Mora,where stayed, and to La Push