We love Maine and it was great being there again. Our two main destinations were near Acadia National Park and North Haven Island. 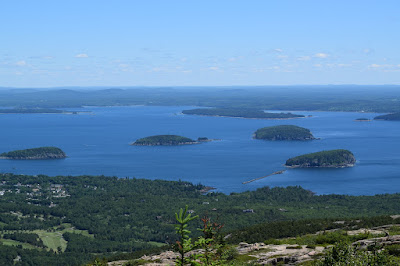 While visiting Acadia we stayed in the Ellsworth/Trenton area, near Bar Harbor. This is a good choice for going to both areas of the park. We were really happy to connect with our friends Barb and Sal - we originally met them at the RV park they owned in Mexico.

Barb and Sal have sold the RV park but still have a lovely home in Valle de Juarez, Mexico, as well as a home in Illinois. We were fortunate to catch them on their way to Nova Scotia when they were on their way to visit Paula and Jerry, other RV amigos. We had a fun day touring Acadia with Brian as our tour guide. We toured the area of Acadia on Mount Desert Island which is the main part of the park that most people visit. 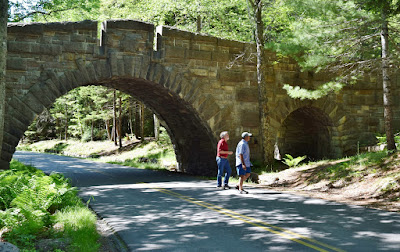 Brian is fascinated with the bridges and carriage roads in Acadia. He knew Sal would appreciate seeing the bridge above which was constructed in the 1930's, and of course Sal found it to be interesting too. Many of the bridges are part of a series of carriage roads and bridges throughout Acadia which were built and financed by John D. Rockefeller. Their construction from 1913 to 1940 resulted in roads with great vistas and close-up views of the landscape. There are 45 miles of these level, 16 foot wide roads which weave around the mountains and valleys of Acadia National Park. There are no motorized vehicles allowed - pedestians, bikes, horses and carriages only.

Another part of Acadia NP is Schoodic Point which is actually the only part of the park on the mainland. When Brian was in the Navy he was assigned to the Naval Security Group at Winter Harbor on Schoodic Point. 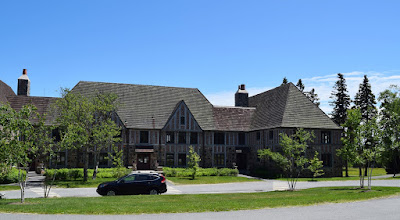 The Rockefeller Mansion housed many of the troops and is now a museum. The sign out front had a photo from the time Brian was there. His commanding officer is on the far right, and he recognized some of the other guys in the photo. 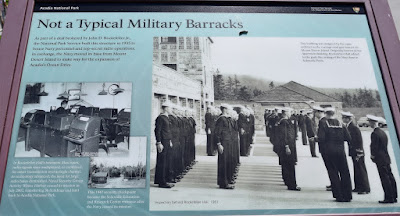 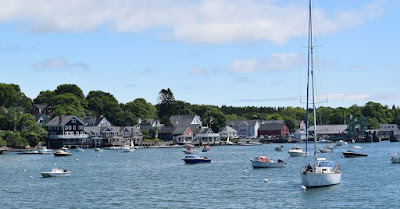 Our dear friend Bici spends her summers in her beautiful home on North Haven island. We left the Bus in Rockland and took the ferry over for our 4th visit. Obviously we love going there!

Our dog Tilly has known Bici's dog Keeper since they were both puppies. We all wondered if they would still recognize each other, and they did. They got pretty excited when we got off the ferry, but since they're both a lot older the jumping around didn't last too long. It was fun to get them out together, along with Bici's other adorable little sweetheart Ivy. Tilly and Keeper liked to wade while Ivy still had the energy to run around. 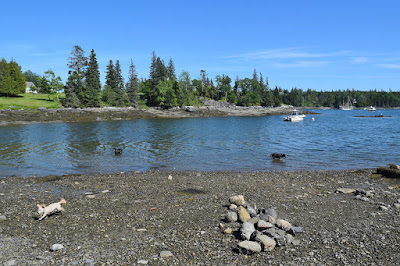 Ivy enjoys being a lap dog, something the other two would love to be. 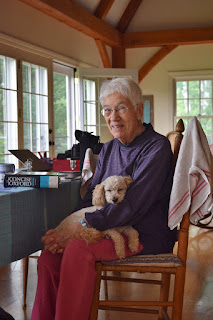 It's always so nice to visit with Bici - delicious 'lobstah', great talks around the table, 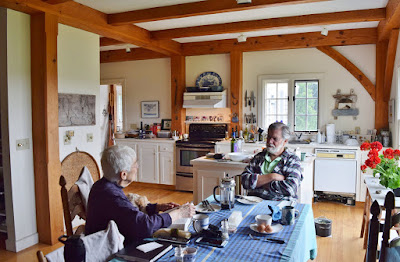 a nice walk down to the beach 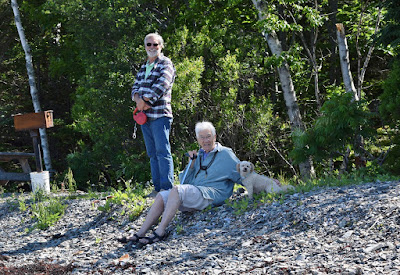 and we even did some interesting bird watching. We spotted an osprey nest while at the beach and saw one of the chicks being fed.

There were several sightings in front of Bici's house of harrier hawks, osprey, and even an eagle. The harrier spent time trying to chase the eagle off, and was successful. 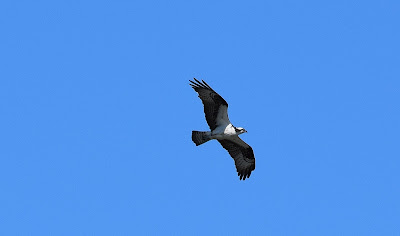 What a great time - we hope to make a 5th visit one of these days!