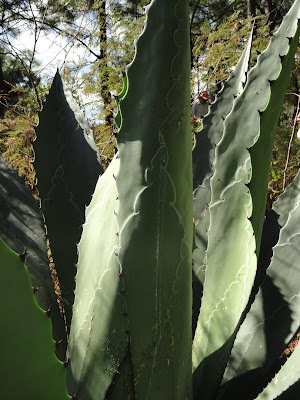 To start the New Year off right we visited a Mezcal ‘still’ in the mountains nearby. The owner and master Mezcal maker is Jesus “Chuy” Lupian. His family has been making Mezcal for over 100 years, while he has been the “maestro” for at least the last 40 years. His son, who lived in near the Palisades Mall, will take over the operation in a few years.
The Tequila/Mezcal differentiation is confusing. They both come from plants in the Agave family which includes Mezcal and Maguay. Tequila only comes from the Webber Blue Agave and by law can only come from very specific areas of . Most Mezcal comes from the state of Oaxaca but can be found in many areas of Mexico - including the state of Jalisco near the border of the state of Michoacan where we are. It takes about 7 years for a Blue Agave to grow to where it can be harvested to make Tequila. Only the Webber Blue Agave is blue – all others, including the Mezcal, are green. Chuy says his mescal is from plants aged 20 to 25 years. 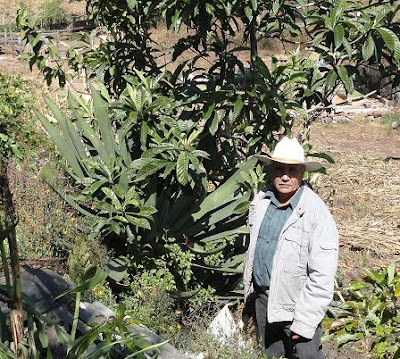 The Mezcal process is similar to the Tequila process we saw in the town of at the Jose Cuervo Distillery. The way Chuy does it is the way it has been done for hundreds of years – this is not factory made brew. First the “leaves” of mescal plant are chopped off by a guy called a Jibaro. The root ball (pina), that looks sort of like a very big pineapple and and can weigh up to 200 pounds, remains. 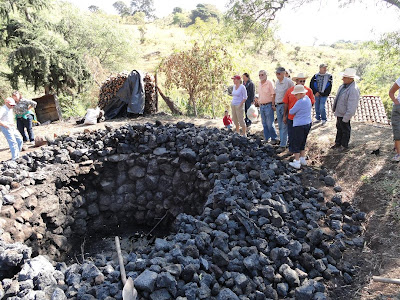 The first stop for the pina is the fire pit, which is very old. It appears to be about 10’ deep and about 10’ across. Wood – a certain type of wood that someone translated as oak but not sure – and lava rock are put into this stone-lined pit to create sort of large oven. The fire is lit and burns for days and the lava rock heats up. The pinas are piled on top and covered with the Mezcal leaves and other stuff – dirt maybe. This cooks for 3 to 4 days. 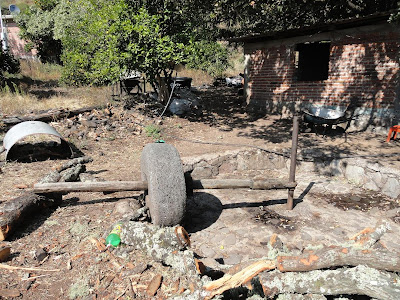 Next is the grinder which is sort of a grist mill. A large round stone like a wheel which appears to be 100 years old is pulled around in a round pit by a horse or donkey to crush and mash the pinas. The mash is very fibrous. 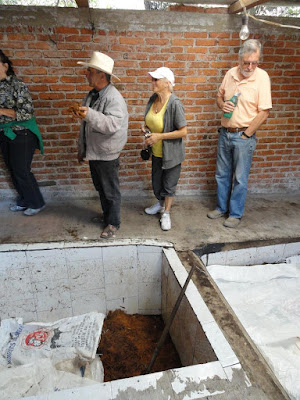 The mash then goes to open vats to ferment. Chuy has a couple of square concrete tubs that appear to be about 6’ across but we couldn’t tell how deep because they were at least partial full of fermenting mash. It has a very sweet aroma. These pits were lined with tile. 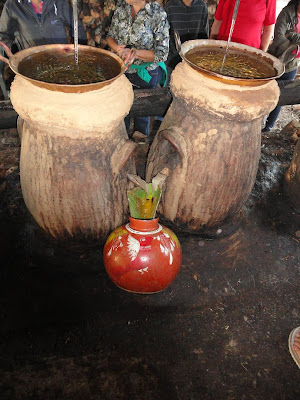 Now the real interesting part. The mash goes into large urns. Under the urns are fires which apparently burn continually. On top of the urns are round concave bowls through which there is a constant flow of cool fresh water. The fire heats the mash which causes vapors to evaporate and condense on the bottom of the bowls. The condensation drips and is directed to little drippers so the drips go into little jugs. As the little jugs filled Chuy watches and when a jug is full he dumps the contents into large plastic water cooler type jug – maybe 5 gallons or so? As near as we were able to translate, Chuy said he makes about 580 liters of Mezcal per year. We are not sure if he does this legally or not but when asked about government involvement he was very definite about not having anything to do with the government. 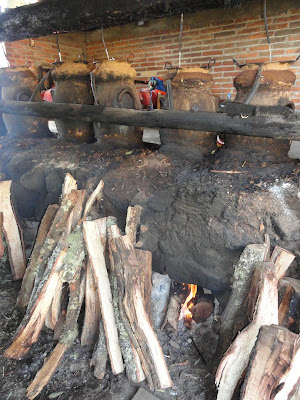 The fire is below the urns. Look closely to see the water flowing in from above and then the black hose out the back of the copper pan. This is how the water flows out and into the trough/gutter behind the row of urns where it is carried out of the building. Normally the firewood is stacked over each fire but they moved a few logs so we could see the fire. It gets quite smoky and the Mezcal acquires a very pleasant smoky flavor. 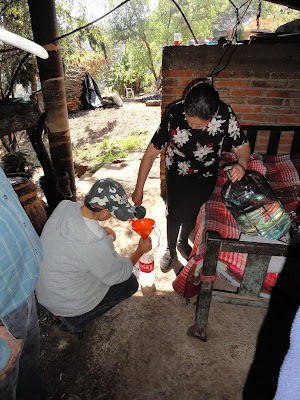 We got to taste the still hot brew that dripped from the urns and then the cooled brew from the water cooler jugs. Having some experience with Tequila we all felt that Chuy makes some really good stuff and many of us bought liters. They had some used Coca Cola 2 liter plastic bottles and just measured and poured each of us a bottle. 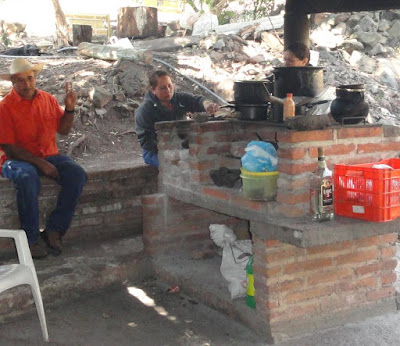 After tasting the Mezcal a bit of food seemed like a good idea. Chuy’s family insisted on providing a really nice lunch for us all and would not accept any money – you are guests in our house. Sal’s cousin Bougy (Bougainvillea sp?) helped and I think she brought a lot of the food too. It's such a treat to find such generous and welcoming people. 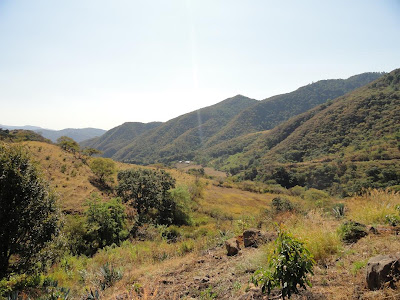 Chuy told us his land has been in his family forever.The road past his house goes another 5 kilometers and everything on it and everything we could see was his. He said he has about 100 cattle and feeds the used mash to the cows to produce superior dairy products.

Chuy was very insistent about the difference between Blue Agave and what he calls the Mezcal plant. There is a website with many of the plants but we aren't sure which one Chuy uses. He takes great pride in the fact that he makes Mezcal, not Tequila. According to online sources all Tequila is Mezcal but not all Mezcal is Tequila. It seems Chuy has his own ideas about thsi.
.
Links for more info:
Travel with Kevin and Ruth  Kevin and Ruth were with us on this excursion and they blogged about it as well - they have a very interesting blog to check out.
Interesting plant/agave info
http://www.ianchadwick.com/tequila/index.htm  shows a jibaro chopping the leaves from the pina and has other interesting info
http://www.tastings.com/spirits/tequila.html

One final piece of information. Somehow a group of Japanese businessmen found out about Chuy's Mezcal. They spoke to him about buying it and having exclusive distribution rights, which evidently amounted to quite a bit of money. He turned them down in favor of keeping things the way they are - nice to know some things really are priceless.