While we were in Santa Fe, NM  a few weeks ago we were looking for some places to hike and found out about Kasha-Katuwe Tent Rocks. The National Monument was about 30 miles from our RV park in Santa Fe, so pretty easy to get to. It was kind of a mini Bryce Canyon, only the hoodoos were a different color.

Tent Rocks is jointly managed by the Bureau of Land Management and the Pueblo de Cochiti, which has always considered this to be a sacred place. Kasha-Katuwe means white cliffs in the Keresan language of the pueblo. 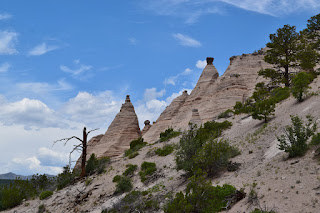 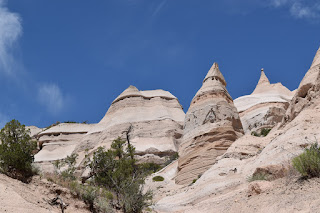 The cone shaped tent rock formations and hoodoos were formed from volcanic eruptions and were carved by wind and water. Some of the hoodoos have boulder caps that protect the softer area below, but those that have lost these caprocks are disintegrating. The photo above shows the hoodoos with the caprocks, and the photo below is of the ones that no longer have caprocks. 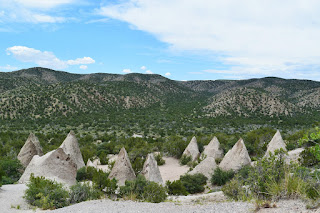 There are two hiking trails at Kasha-Katuwe, both starting at the parking area. The Canyon Trail is 1.5 miles long, and is the one we took first. It goes through a  canyon and climbs 630 feet to the top of the mesa.
Having Brian in this photo gives some perspective to the size of the hoodoos. 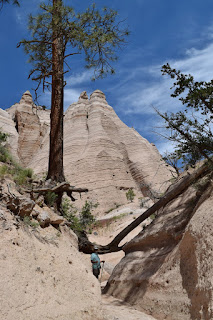 It's hard to believe the tree below has survived the water that must rush through the canyon. 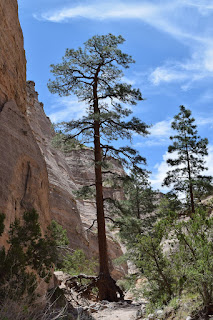 The root system was incredible. 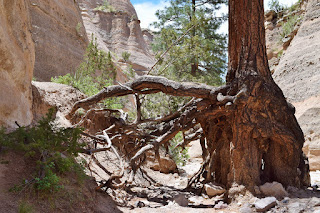 There were spots on this hike where the canyon was more of a slot canyon. It was so narrow in places that we had to go single file and take turns with people going in the opposite direction. While waiting for one group to come through I overheard a young boy ask his mother 'do only old people use those poles?' Very observant of him.

Fun to look up through the narrow slots. 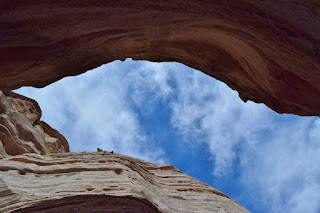 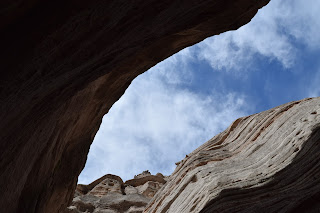 After hiking the Canyon Trail we took the 1.2 mile Cave Trail. The one cave we saw had drawings on the ceiling. Not sure how old it was, but we learned that during the 14th and 15th centuries several large ancestral pueblos were established and their descendants, the Pueblo de Cochiti, still inhabit the area. 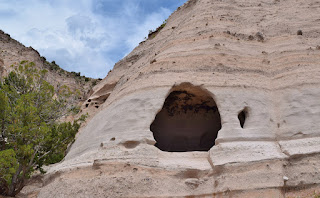 The trail back to the parking area wound around through the tent rocks and hoodoos. 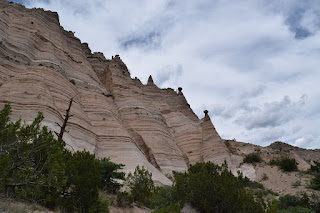 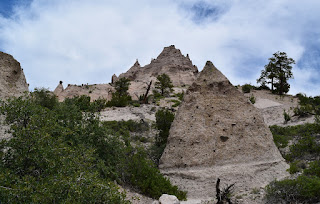 We've been to Santa Fe quite a few times, but this was the first we had heard of Kasha-Katuwe. It's always fun to discover new places!