Finally Made It to Colorado

On the day we left Fountain Hills the high temp was supposed to be 114. Needless to say we were happy to escape. In the weeks before we left our routine had changed to adapt to the higher temps, getting up around 5 AM so we could do our walk before it got too hot. We stuck to the routine while getting the Bus ready to go, and pulled out around 7:30 AM. Pretty early for us.

We've been in Dolores, Colorado for the last week. It's a small town in southwest Colorado, west of Durango and quite close to Mesa Verde National Park, the Anasazi Heritage Center, Canyons of the Ancients National Monument and Hovenweep National Monument. They are all part of a large area where Native Americans, eventually known as the ancestral Pueblo people, made their dwellings and villages. 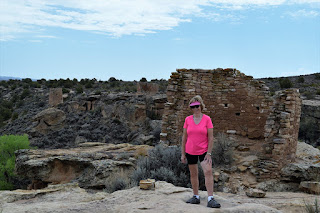 Although no one has lived in them for over 700 years, the towers and cliff dwellings are still impressive. It's really interesting to see how well they were built, especially some of the taller towers. 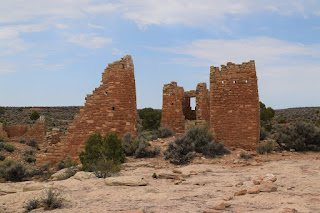 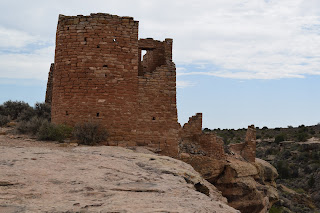 There are cliff dwellings as well, evidence that a sizeable population lived in this canyon at one time. The eroded Boulder House can be seen in the photo below, under the curved overhanging rock. 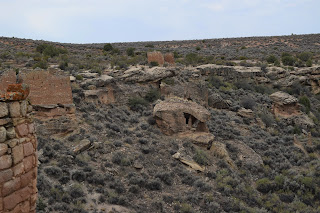 Lowry Pueblo, Canyons of the Ancients 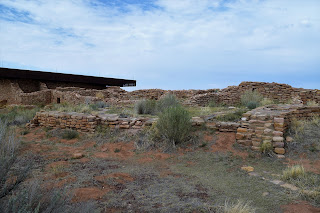 This pueblo was interesting for a couple of reasons. It's 2 stories tall, has over 40 rooms, and several kivas. Kivas are a large chambers, usually wholly or partly underground, that were used for religious ceremonies and other purposes. The main structure at Lowry is protected by a metal roof, and we were able to go in and look at several of the rooms. We think the walls in the photo above are probably part of the upper story and the main level is still partially underground. The architecture was influenced by Chaco Canyon, about 100 miles south.

This place was fascinating and really well worth a stop. There are displays showing the history and the methods modern archaeologists use to excavate and preserve artifacts. Many of the displays are interactive. There is a reconstructed pit house, which was basically an underground house that the ancients lived in before they began building pueblos. It really gave us a sense of what the people and their lives were like so many years ago. Very impressive and highly recommended as an introduction to this area. I didn't take any photos but the link below has some good ones.

This was our second visit to Mesa Verde. The first time we went we did the more popular side of the park where the most famous ruins are located. We took the the ranger guided tour of the Cliff Palace, which is Mesa Verde's largest cliff dwelling, and took the Chapin Mesa loop road that went by many of the sites. Since this area attracts so many tourists at this time of year we decided to go over to Wetherill Mesa on the quieter side of the park. 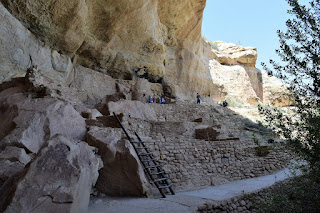 We hiked down to  the Step House and were able to climb around and get a good look at things. It's amazing how the park service has managed to preserve so many of these sites while still allowing people to get up close and personal. 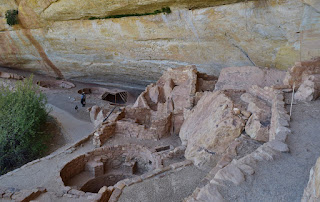 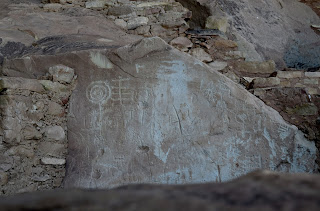 As we hiked back out of the canyon we could see many overhangs and other formations across from us. 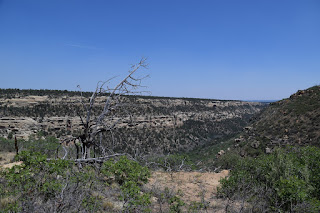 In the photo of the rocks below I see what looks like a face. Above it, evidence of one of the many fires that have happened in Mesa Verde can be seen. Lots of black and dead trees, but vegetation starting to grow. 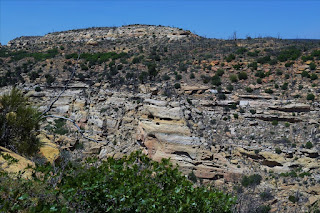 We also saw this little guy on our hike out - one of the more colorful lizards we've seen. 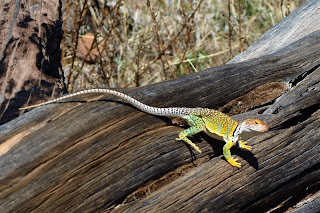 We really enjoy learning more about the history and culture of this area. We have explored many of the ruins in Mexico that have both architectural and cultural similarities. It's obvious that there were well established trade routes developed by the ancient Pueblans hundreds of years ago with people to the south and west.

We've finished our learning and exploring in this area for now and will be moving on to another small Colorado mountain town, Ouray.
Posted by Sue and Brian at 4:59 PM