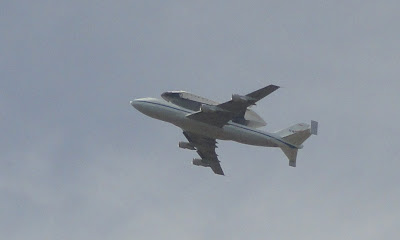 It would be a bit of an understatement to write that we had an amazing experience today. It was one of those magical moments that just seem to happen when everything falls into place.
For the past few weeks much of the news in the L.A. area has focused on the final journey of the Space Shuttle Endeavor to its new home at the California Science Center. Of course we thought it would be pretty cool to see the shuttle on its journey, but never really thought about actually being able to see it. Yesterday we realized that we were in the area that it would pass over and we started to do some research.  The news said that one of the flight paths of the shuttle would include a low flyover at Vandenberg AFB which is about 30 miles from Lake Cachuma, where we are currently parked. A little more research turned up a suggestion for a good place to watch the shuttle. The clue was to find the corner of Stardust and Moonglow in Vandenberg Village. I don't know who figured it out, but it turned out to be the perfect spot!

When we arrived there were a few cars that evidently had the same information we had. We had a bit of a wait but really enjoyed talking to the other people who were waiting along with us. One woman had connections at Vandenberg and had a friend call her as soon as the shuttle appeared there so we would know to start looking. I can't begin to describe what is was like to see the shuttle headed our way, escorted by fighter jets. The spot we were in was unbelievable - the shuttle came right over us after making its pass on the base. Looking at Google Earth we figure they must have buzzed the Vandenberg runway and then started to climb while turning east. We were almost directly under the flight path as it flew out of Vandenberg. It was so close we could see the tiles, the windows and the entire setup. Words fail me when I try to describe what it was like to experience this. Absolutely a once in a lifetime, historic event and we were right there. 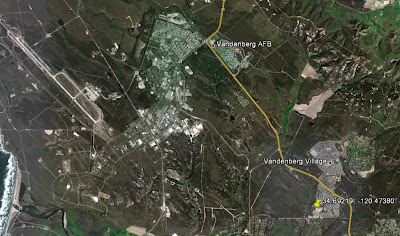 Here is a Google Earth screen shot of the Vandenberg runway with the yellow pushpin showing the Latitude Longitude where we were watching. 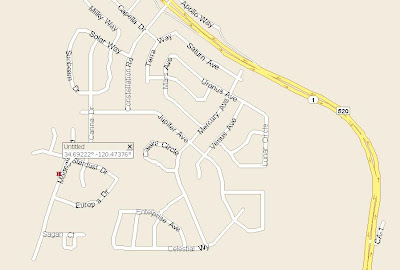 Here is almost the exact location we were standing near Stardust on Moonglow. 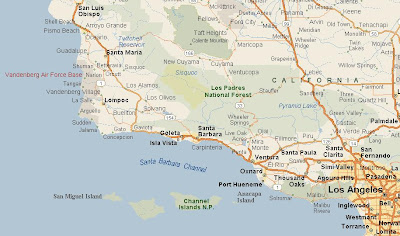 Here you can get some idea of where Vandenberg is. We were just north of Lompoc. Our camping site is by Cachuma Lake which is just under the G in Solvang on the map. Remember you can click any of these to see a larger shot.
Absolutely a great day.
Posted by Sue and Brian at 8:01 PM