Our internet connection has been sporadic so I haven't been blogging - this will catch us up a bit.

The holiday season in San Miguel was a bit more crowded than we had anticipated but we still enjoyed ourselves. Every time we go to San Miguel we notice the increase in cars and people. This year it was so crowded that the streets around the central Jardin were often completely close for many blocks. There was simply nowhere left for anyone to park, so the police were only letting taxis, buses, and motorcycles through. We tried taking a taxi into town, but then faced the difficulty of trying to find an empty one to take us home. Fortunately things relaxed a bit after Three Kings Day. 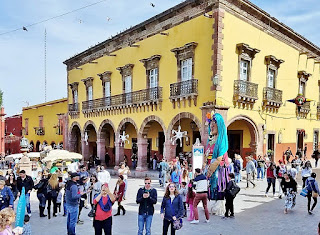 Lots of people around the Jardin. We always enjoy seeing the Mojigangas parading through town. 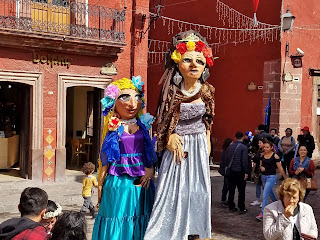 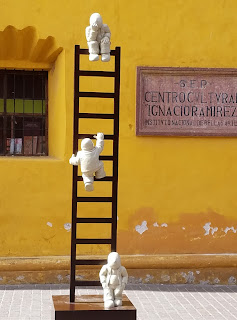 The RV park at San Ramon is about 3 kilometers out of town, more quiet and rural. One day we spotted a couple of unusual birds which we found out are called Crested Caracaras. They have an interesting history. Historians say that when the Aztecs were wandering through Mexico their god told them to look for a place where they would find a large bird eating a snake, on top of a cactus growing out of a large rock, in the middle of a lake. Their god told them that when they found this place they were to establish a city and build a temple. The place was Tenochtitlan, the center of the Aztec Empire. https://www.ancient.eu/Tenochtitlan/ It's believed that the bird the Aztecs saw was a Crested Caracara and it was depicted on the original Mexican flag, but changed to a Golden Eagle on the current flag. The ruins of Tenochtitlan are still being excavated in Mexico City. 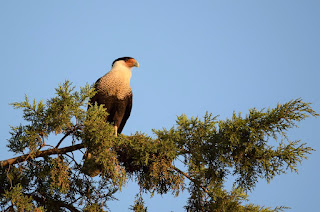 Atotonilco is a small town close to San Miguel. The church there has been called the Sistine Chapel of Mexico, and though we've been there many times it always worth another visit. 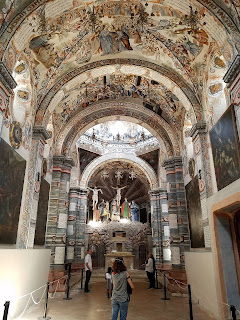 There's an old mining town about an hours drive from San Miguel called Mineral de Pozos. We had been there before but took our friend Meridith and her daughter Harper there with us on a day trip. We met Meridith, her husband Gary and Harper at San Ramon RV Park. They're from Lafayette Colorado, very close to where we used to live and pretty fun to hang around with. 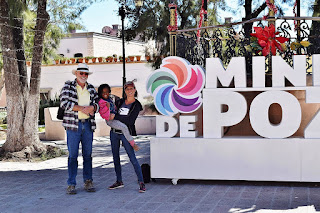 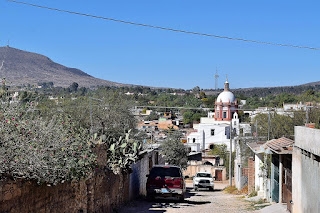 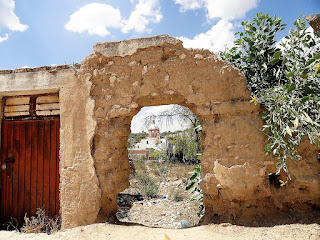 There's a womans' cooperativa in Pozos that raising money by making very elaborate clothes for dolls. Each doll represents an area or culture in Mexico and is dressed accordingly. I bought a doll several years ago, and Harper got one this year. 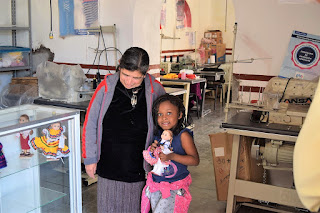 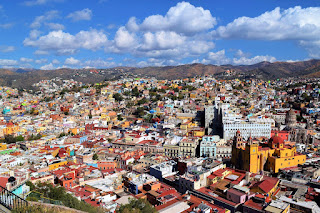 It's always a pleasure to be in Guanajuato, a beautiful silver mining city and one of our favorites.  It's in a narrow valley with houses and roads climbing up steep hills around the historic center. It's a walking city and because of its topography it has narrow winding streets that connect a series of small plazas. A view from the Panoramica Drive around and above the city shows the colorful homes going up into the hills. 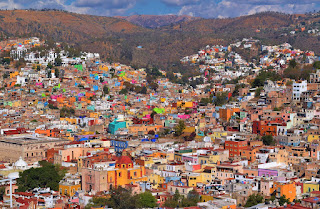 Small plazas with little cafes and narrow alleyways, some with cafes or homes built on the bridges above them, are found throughout the city. 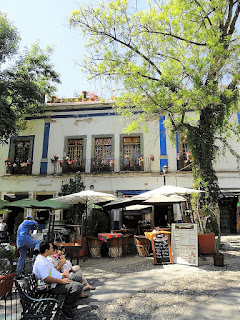 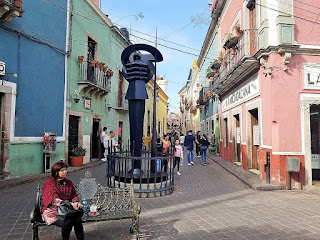 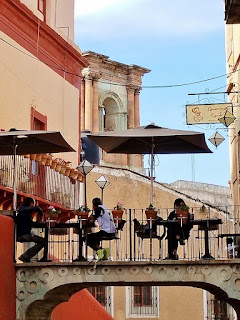 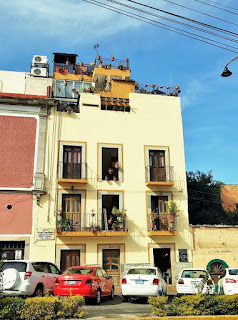 Don Quixote and Sancho Panza are popular figures in Guanajuato. There is a Don Quixote Museum and the International Festival El Cervantino is held in the city each fall. The origins of the festival are from the mid 20th century when short plays by Miguel de Cervantes were performed in the city's plazas. It has now been expanded with more international events, and has become one of the four major festivals of its type in the world. 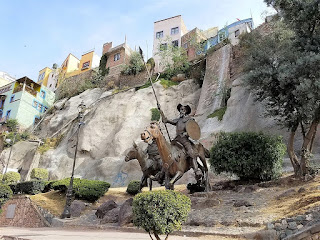 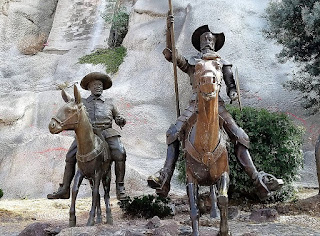 The places I've written about in this blog are all places that we have visited and blogged about before. For more pictures and more extensive information about them, use the 'search' window on the top right side of the blog and type in the name of the city or area.
Posted by Sue and Brian at 10:42 AM