As we made our way across Texas to cross the border into Mexico near Laredo we were surprised to encounter snow, as were the people who lived along the border. Many of the people we talked to had never seen snow before so it was a bit of an event.
Brian wrote up a few emails describing our trip from Laredo to San Miguel de Allende that I'm just going to cut and paste for the post, along with some pictures we took and got off the internet.

Record breaker – I think. We left the Laredo, TX area around 8:30am Fri and by about 10:45am were stopped by a huge traffic back up. By around 6pm we had gone probably less then 2 miles. It is our understanding the road over mountains north of Monterrey was closed due to snow and ice. Trucks and cars were backed up for many miles. We pulled over to the side where there happened to be a wide area due to an old closed exit east of Sabina Hidalgo. Traffic finally started moving around 9pm but there were several trucks stopped on both sides of the road along the same wide spot we were in so we decided to stay the night not knowing exactly what was up ahead. Snow is so rare they don’t seem to have equipment or material to take care of snow and ice on roads so they just closed the pass. During the time we sat we saw no police or other government entities coming along the road. The truckers and some of the other people did seem to know what was going on. We called our friend Chris who lives near Monterrey and were told that not only the road north of Monterrey was closed but the road south of Monterrey was closed too. So we hope to be back on the road before daybreak to see how far we can get. Traffic is moving here now. We are fine in our self-contained little house – warm and fed and securely locked in. Chris gave us some info on the Federal Police website  which came in handy https://twitter.com/PoliciaFedMx?ref_src=twsrc%5Etfw&ref_url=http%3A%2F%2Fwww.elhorizonte.mx%2Flocal%2Fcarretera-a-laredo-continua-cerrada-por-nevada%2F2034006 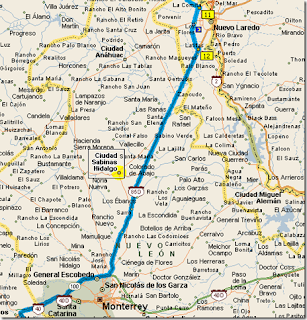 Pictures from the internet showing why the roads were closed. 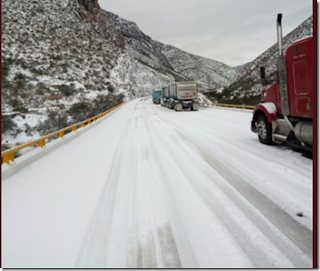 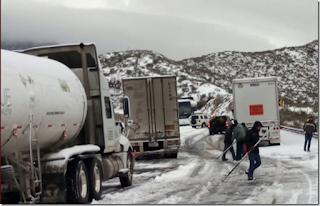 Coming into Monterrey after our first night of literally spending the night on the road. 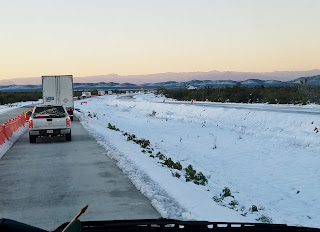 Today (Dec 9, 17) it took us about 12 hours to go 99 miles! Seriously. Map below. The road going south from Saltillo toward Mexico City was closed due to snow and ice and no way to remove it apparently. No one told us until we were on the road between Monterrey and Saltillo at which point we were stuck with no way out and no end in sight. The Federales twitter website did say the road was closed but who knew they would not get it open all day? We left our roadside wide spot [1] well before sunup at about 6 AM. We got to the road between Monterrey and Saltillo between 7:30 AM and 8 AM. And then we saw the backup of vehicles. There are two main roads – one free and one toll – we were directed to the free road by Federales so had no choice. But no matter as both roads were backed up all day. We finally got to another wide spot [2] by a Pemex station still several miles from the exit to head south at about 6:30 PM. Very tired. Nowhere else to go. Traffic still stop and go – mostly stopped – until maybe 8 PM when for some reason things began to move. We have no idea why they can’t open the pass during daylight but can open it at night. We are safe and secure and warm and fed and can still get satellite TV for some reason so we are fine. If tomorrow is like today we will probably be up by 5 AM and head out hoping for the best. We are supposed to be in San Miguel de Allende tomorrow but since it is still about 400 miles away we may not make it. Watching the Today Show this morning we saw people in NYC not needing jackets or coats outside on the plaza. Something about the weather these days. So traveler tip for Mexico – if you hear it snowed (check the weather) be prepared to sit in your vehicle all day or find a nice place to wait it out. 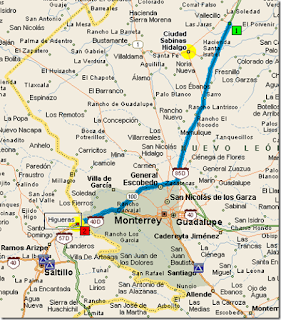 Brian climbed up a hill and took the photo below while we were stopped for hours. The arrow points to the Bus. 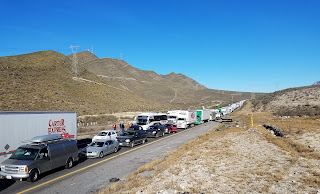 The road was open and we got an early start. Things weren't too bad going south but apparently the road going north was closed at the pass just past Saltillo. We really couldn't figure out why since it looked like a couple of dump trucks with sand could have taken care of the northbound lanes over the pass and through the tunnel. We kept track on the odometer and the line of stopped trucks went on for 30 miles. Emergency vehicles were delivering food and fuel, and people were building fires in the median and alongside the road to keep warm. Trucks were parked at truck stops and restaurants as well. I think the news said that over 2,000 trucks were waiting for the road to open.

We had a long day but we got to San Miguel de Allende and pulled into our spot at San Ramon Hotel and RV park before dark. Glad to be settled in, and never hope to repeat a journey like that!