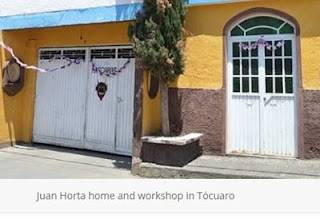 Tocuaro is a very small town about 10 miles from Patzcuaro. We have heard this is a famous place for mask making and wood carving. Most of the masks are carved from a single piece of wood. We went there a few years ago and could not find the mask makers. This year we learned that you have to roam the streets (there aren’t many streets) looking for signs. The doors are closed but they are probably open for business – not really stores as they work in their homes. 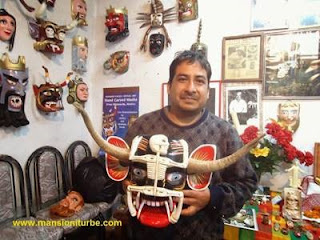 The most famous of the mask makers are of the family Horta. We met Juan Horta’s esposa (Juan died quite a while ago) and were able to see some of the works of her five sons -  Juan Jose, Modesto, Orlando, Hugo and Manuel. The sons do not seem to make a living as mask makers and spend time working in the US near Boston where they also do workshops teaching mask making. The photo above is from their shop, and we think it's Juan Jose in the photo.

We then visited with Felipe Horta (below) who is apparently a cousin of the other Hortas. He is quite a character and we had a really enjoyable time seeing his work and talking with him. 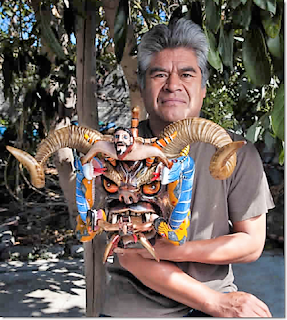 Felipe is not only a mask maker but a mask collector and has a room full of masks from all over the world - Africa, India, Indonesia, Thailand, and many other places. He gave us an interesting tour of his private mask museum at his house/workshop. 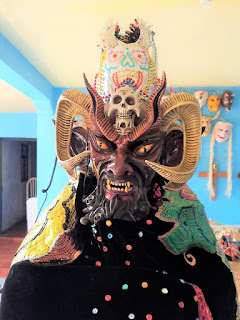 Felipe's masks and the Horta family masks are displayed and sold all over Mexico, and are found in museums throughout the world including the Vatican. Felipe goes to San Francisco every year for exhibits and workshops. One of the intricate masks he showed us was priced at $15,000 pesos or about $800 US, and would cost much more once north of the border. 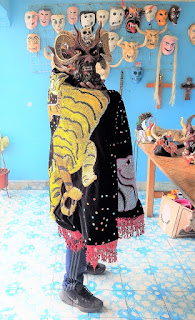 Felipe told us that his masks and capes are worn in what is called a Pastorale. It is held in Tocuaro in February every year. The wooden masks are related to the characters of the Pastorela. Each one is a unique piece, a product of the creativity and imagination of the artisan artist who creates it. Like most objects of popular art, the masks went from being simple but ingenious to larger sizes with more intricate carving. Each showcases the skill of its carver. Year after year they compete among themselves for the honor of having their mask best characterize the three most important characters in the traditional Pastorela. In general terms, the omnipresent characters in the Mexican Pastorelas are the angel (representing the archangel Michael), the shepherds, the hermit (who embodies the spirit of the ancestors) and the devil - always interested and willing to steal the Child Jesus. 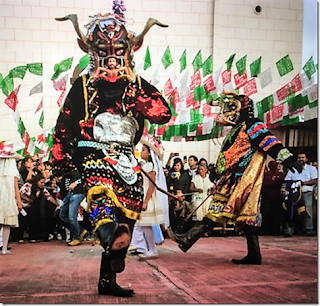 It seemed that most of Felipe's masks were representing the devil and he had fun hamming it up with them. The mask below is similar to the one Brian bought from Felipe. Note the blue bat, vampira, between the horns.  The masks can represent many different animals which have different meanings. 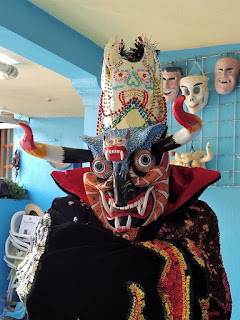 Felipe also wanted to show us the detail in his cape, which was really quite extraordinary. All handmade of course.

And last but not least is an X-rated mask by Felipe. 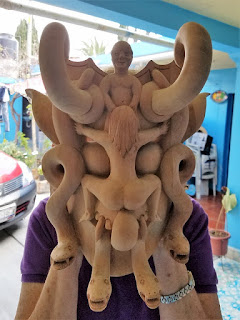 We were happy to finally make it to Tocuaro and not only see the masks but meet the artisans. More information can be found at the following links, or by googling Horta, Tocuaro or Pastorales.