One of the things that Michoacan  is known for is the Danza de los Viejitos, or Dance of the Little Old Men and it's performed regularly in Patzcuaro. There are several explanations for its origin. In one version of the story, the dance of the Viejitos was originally the dance of the dissed. According to this account, the stiff, lurching, rhythmically challenged dance originated as a way for the indigenous population to make fun of their elderly Spanish overlords. This explanation seems supported by the dancers' pink masks, the color of a fair skin that has encountered tropical sun for the first time.
Other sources say that it is a celebration of old age and reflects traditional veneration of the elderly. They contend that the dance was performed in the region even before the European conquest. Whatever the truth to its origin is, we always enjoy watching it performed. The dancers wear wooden shoes that are kind of split, which gives the 'tapping' sound heard.

The video shows part of the dance performance.


All of the dancers aren't old men but there seem to be a variety of ages represented, depending on which group happens to be performing. 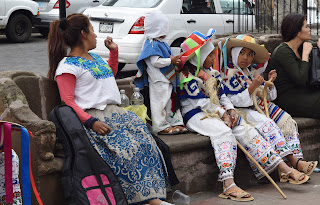 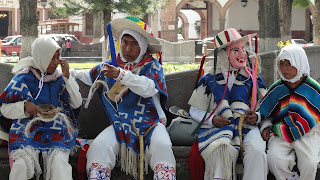 We spent time with friends Barb and Sal, Paula and Jerry while wandering around town and had a nice lunch at Lupitas restaurant. 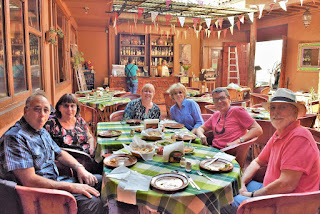