Patzcuaro is one of our favorite places and we wanted to experience Carnaval with the Toritos again this year.  Carnaval takes place on the three days before Ash Wednesday. The celebration begins on Sunday and ends late Tuesday night. Loud booms and fireworks announce the approach of groups of Toritos as they roam through the neighborhoods.We saw 2 or 3 groups on Sunday and heard them again on Monday and Tuesday. I guess the idea is to party, party, party before giving things up for Lent! 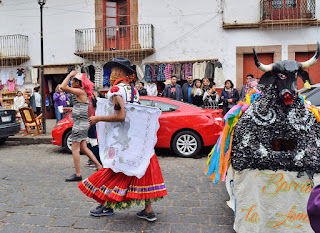 One version explaining the origin of the Toritos is that they were introduced in the 16th century to Michoacan lands by Vasco de Quiroga.  Their purpose was to attract the attention of the indigenous peoples who had taken refuge in the Sierra mountains before the arrival and cruelty of the Spaniards. 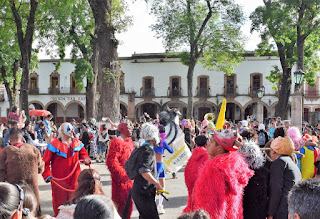 Another version of their origin mentions that the bulls were invented by the indigenous people to mock the bullfights practiced by the Spaniards and that Vasco de Quiroga only improved and organized them. Each town and its inhabitants were forced to help with the construction and decoration of the bull and to present it three days before Ash Wednesday 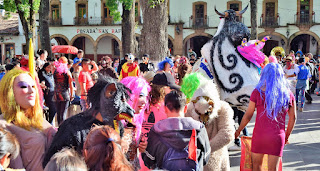 The Toritos dance traditionally contains several elements. There are those who dance around, usually 10 or more males dressed as women and the bull. There is a male who gets inside the frame of a bull and is the one who is responsible for giving life and movements to the bull with jumps and leaps. The men dressed in drag are pretty entertaining. We think they are called Maringuias and represent the women of the town the particular Toritos group is from. At least one person is disguised as the devil and more than one represents death. Interesting to see one of the Toritos in a Donald Trump costume. 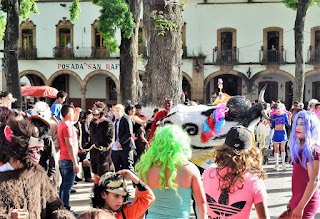 Although Patzcuaro is always an interesting place to visit, coming for Carnaval and the Toritos is especially fun!

About 20 miles or so to the northeast of Patzcuaro off the new Autopista Cuitzeo Patzcuaro is the town of Capula where Catrinas are made. Catrinas are mostly doll size ceramic figures of a skeleton dressed in many and various elaborate costumes. We took a road trip with our friends Jerry and Paula and roamed around Capula, looking at literally thousands of these figurines. Yes, we did make a purchase or two. We see Catrinas all over Mexico but Capula is the world capital of Catrinas. There is a giant Catrina statue at the entrance to Capula, which is a very small town. 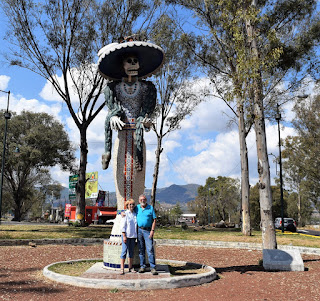 The Catrina was created by José Guadalupe Posada and made famous by the muralist Diego Rivera. It was presumably Diego Rivera who called her Catrina, a name with which she later became known, converting her into a popular Mexican character. 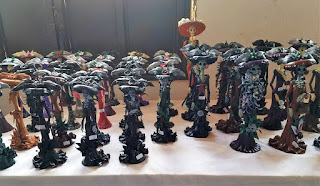 Although its image is associated with the Day of the Dead, the Catrina refers to many social situations of the late nineteenth and early twentieth centuries. The caricaturist José Guadalupe Posada made an illustration of a skull with a hat, which he named La Calavera Garbancera . At that time, it was called garbancera, named for those who sold garbanzas or chick peas. They were commonly of indigenous origins but ashamed of their roots and pretended to be European. With this skull, Posada criticized many Mexicans who, despite being very poor, seemed to follow the European way of life. 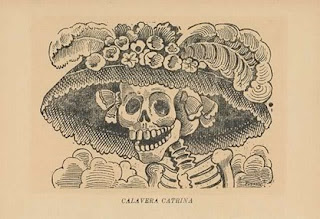 There were so many Catrinas in Capula that it was a bit overwhelming. There is a wide range in quality, which is reflected in the price of a Catrina. The prices, however, are considerably less in Capula than we have seen elsewhere. Makes sense since that's where they're made. The Catrina shown below is one of the ones we bought - love the detail as well as her pose. 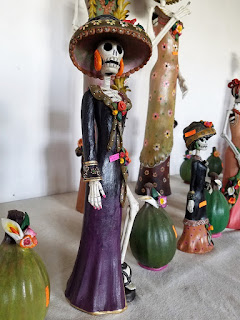 We found a nice restaurant for lunch that had some fabulous murals depicting Catrinas. 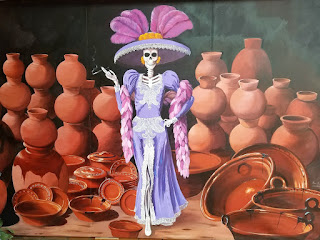 The mural below from the restaurant shows Diego Rivera with Frida Kahlo. The detail in the mural was quite remarkable and very surrealistic. If you click on the photo you can zoom in to see some of the weird creatures. 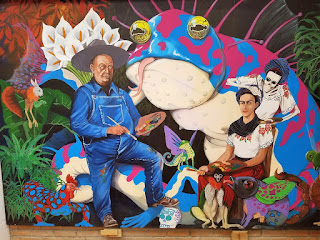 This appears to be a Catrina of Frida Kahlo painting Frida. Interesting. 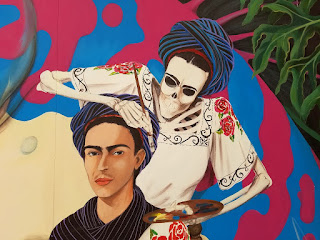 Some of the figures in the mural are similar to the Albrijes we saw in Oaxaca. 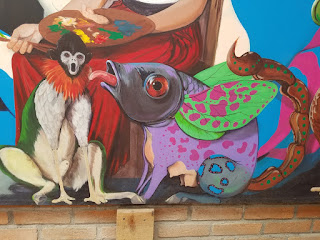