Back to Mexico for the Winter

After getting caught up on things in Arizona we were able to leave Fountain Hills on December 3. Since the cost of diesel is considerably less in the United States than in Mexico (didn't used to be this way) we decided to go east through Arizona, New Mexico and Texas and cross at the Colombia Bridge near Laredo. We made a few stops along the way, with our last overnight stop in the U.S. in Carrizo Springs, Texas. We crossed the border on December 11 and spent the first night at our usual stop, the Pemex in San Pedro. The next day we arrived in San Miguel de Allende. We spent a few days there and then headed for Cholula, sort of a suburb of Puebla. 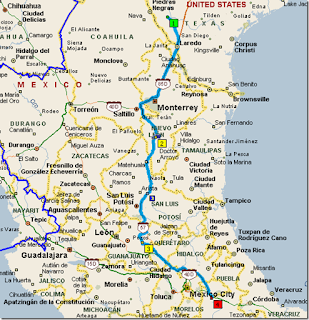 We stopped in Cholula a few years ago, mainly because there's an RV park there, but didn't spend much time exploring the sights. This time we stayed for a few days so that we could tour the Pyramid and see some genuine Talavera pottery. More on that in blogs to follow.
Posted by Sue and Brian at 2:58 PM