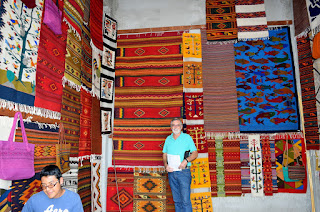 The town of Teotitlan, known for making many of the rugs found in Oaxaca, is only about a 10 minute drive from our campground. We've been anxious to go there since we began seeing and learning about these rugs.
As we drove on the road toward centro, we passed many rug places. Some of them were large and some were small, but they all had gorgeous rugs on display. We decided to concentrate on the central area of town. Families in Teotitlan have been producing rugs for many years, and the skill is passed from one generation to another. Our first stop was at a shop called Huizache belonging to the Alexander Mendoza family. 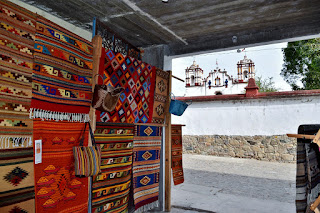 We were greeted by Veronica, one of the family members. 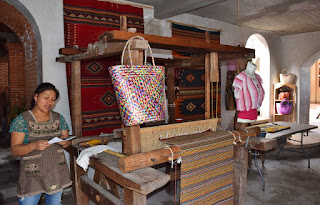 Many of the shops and workshops are in the family home, as this one was. Veronica took time to show us around and demonstrated some of the process of rug making. She explained the difference between the types of dyes used, whether natural or artificial. The type of dye as well as the intricacy of the rug pattern determines the price of various rugs. Her conversation with us helped us to understand what's important to look for when buying a quality rug. 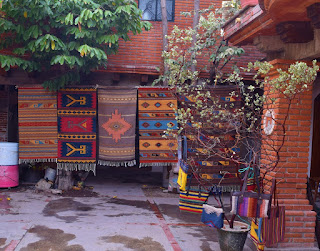 The most valuable red dye is called cochineal. Cochineal dye was used by the Zapotecs.  Produced almost exclusively in Oaxaca by indigenous producers, cochineal became Mexico's second-most valued export after silver. At one time is was more valuable than gold. It has such an interesting history that an entire book was written about it called A Perfect Red, written by Amy Butler, It's a good read.
Cochineal dye comes from the cochineal insect. They're found on the paddles of prickly pear cacti, then are brushed off and dried. Veronica showed us how the cochineal is ground and goes from gray to red. It's then mixed with water, and heated while the woolen skeins are added. 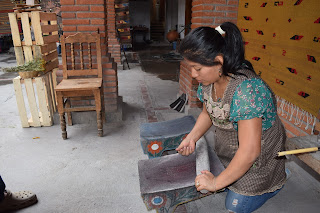 She also told us about the other dyes used for the wool - many are derived from plants. There were skeins of the various colors of wool hanging, waiting to be woven. 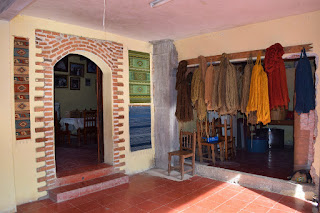 After thanking Veronica for her hospitality we went into the central marketplace where many stalls can be found. There are so many stalls that it gets a bit overwhelming and difficult to distinguish one from another. The photo below is just the tip of the iceberg. 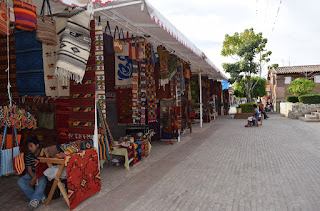 We were pleased to get a bit more education at one of the stalls. The women were fun and we enjoyed their demonstration. We found out more about cochineal dye - crazy but if lemon is added to the dye mixture it changes the color. 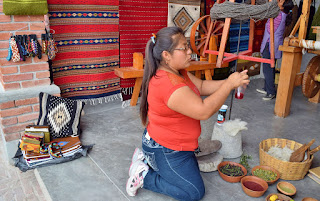 The wool is first carded - the paddles remind us of the brushes used to groom dogs. 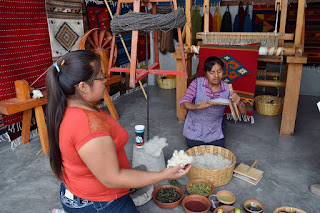 The wool is then spun on a spinning wheel - the whole process is amazing to me. 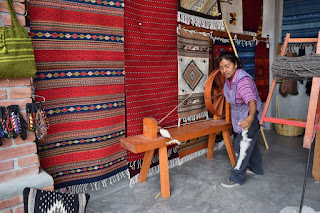 Once the wool is spun into what I guess you would call yarn, it's dyed and then woven into a rug. The woman doing this had to have very strong legs and arms to work the loom. 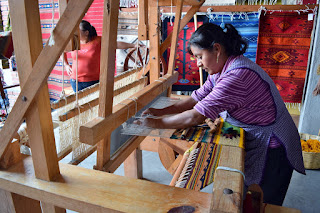 So very interesting and what a skill. Now that we have an idea of what to look for, we hope to go back and purchase one of these very special rugs.
In addition, there is a museum and research facility that is supposed to be the premier place to learn about cochineal in Santa Maria Coyotepec called Tlapanochestli (try to pronounce that). Hopefully we'll get there and learn more about cochineal.