Cholula and The Pyramid of Quetzalcoatl 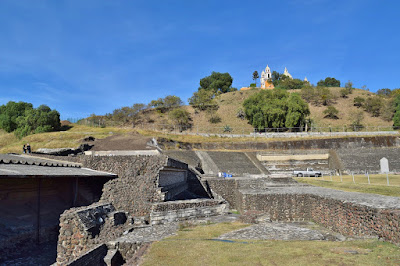 The pyramid in Cholula is thought to be the largest in the world. When most people think of pyramids they tend to think of the ones in Egypt being the largest. but the one in Cholula is actually the largest in volume. It's 1,395 ft square at the base and stands 203 ft high. Brian found an interesting interactive website comparing some of the worlds' pyramids at https://upload.wikimedia.org/wikipedia/commons/3/3e/Comparison_of_pyramids.svg
The pyramid has been rebuilt 7 times, often layer upon layer, and is currently undergoing excavation and reconstruction. The photo above shows some of the excavated ruins. To get a perspective on size notice the pickup truck and workers on the ruins, with the buried pyramid and church on top in the background.
Archaeologists have also excavated 5 miles of tunnels under the pyramid and have identified at least 4 stages of construction between 200 BC and 800 AD. We walked through some of the tunnels and there were several spots cut into the tunnels where we could get a glimpse of what we think are earlier incarnations of the pyramid. 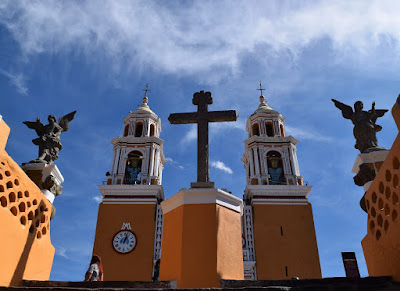 It was a bit of a hike to reach the Church of Nuestra Senora de los Remidios on the top of the pyramid. It was originally built in 1594, then completely rebuilt between 1868 and 1874 after an earthquake. 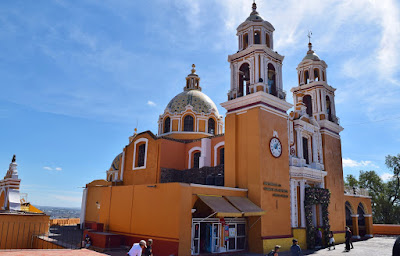 As we were hiking up to the church we were able to see two volcanoes. Popocatetepl, on the left, is an active volcano. It's Mexico's second highest peak at 17,802 ft. It's linked to the volcano Iztaccihuatl, on the right, by a high saddle called the Paso de Cortes. Izta is 17,160 ft high and is dormant. Smoke can be seen coming out of Popo in the photo below.

Once we got to the top of the pyramid we were able to see the tallest peak in Mexico, Pico de Orizaba, which is 18,491 ft., on the other side. When we went to the Yucatan several years ago we took a pass near Orizaba which was quite an adventure. We went very slowly through the clouds, unable to see much besides the road. 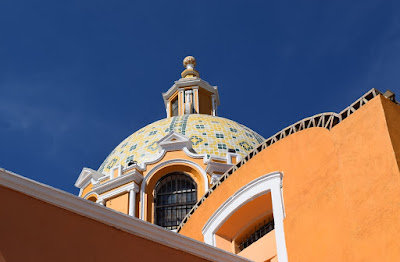 There was a lot of tile work on the church and cupola, which is typical of this area.

We were able to go into the church and it was one of the most beautiful and well-maintained that we've seen. No photographs were allowed, but Brian was able to find one on the internet.

One of the things Puebla is known for is its mole sauce, kind of a spicy chocolate sauce. After all our hiking we were pretty hungry and found a nice restaurant on the San Andres zocalo, the main square. We both had chicken with mole poblano, which was quite good. 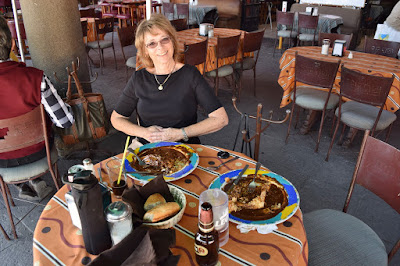 After lunch we walked around Cholula for a while, crossing over into the San Pedro section. We came across another interesting church near the zocalo in San Pedro called the San Gabriel Convento
We were able to go inside the church which wasn't as elaborate of some of the churches we've been to in Mexico, but still very nice. 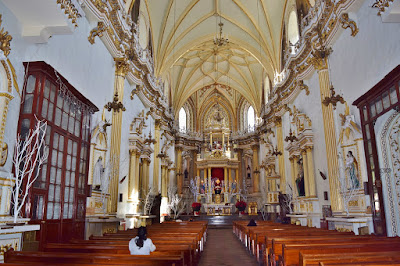 Next to the Convento is the Capilla Royal. It has 49 tiled cupolas and was built in 1540. This was the first we've seen of this type of building. 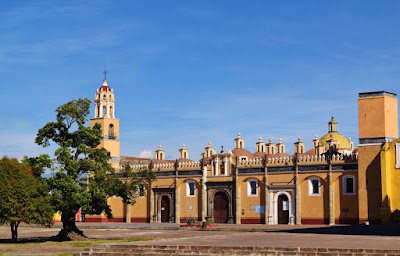 We weren't able to go inside of the Capilla Royal, which is a shame. I got the photo below off the internet and it looks as though the light coming through all the domes is pretty spectacular. 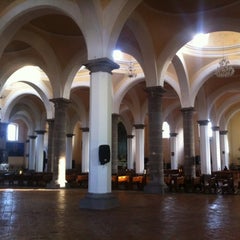 All in all, an interesting day for us.
Posted by Sue and Brian at 9:51 AM