We've been pretty involved with a variety of issues and projects so I just haven't had time to post anything for quite a while. Fortunately things have settled down a bit and I hope to get back to my occasional posts on a more regular basis (is that an oxymoron?)

We ended our summer travels in Red Bay, Alabama,where the Tiffin factory is located.Since our Bus was built there it was our first choice of places for maintenance issues as well as some other improvements including new carpet and some exterior painting. We contributed generously to the local economy.
There isn't a whole lot to do in Red Bay but we took a fun day trip to the Muscle Shoals Sound Studio with our new friends, campground neighbors, and photographers for the day John and Dena. 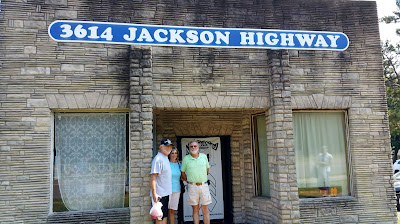 By chance, we happened to visit the Studio on the last day it was going to be open before being remodeled. The remodel is primarily being funded by Dr Dre and Beats Headphones. We were told that he was putting up a million dollars so it should be pretty nice. 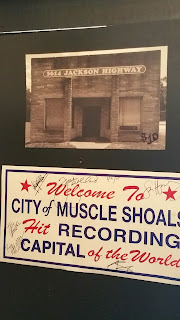 Muscle Shoals Sound Studio was formed in 1969 when a group of four session musicians called The Swampers decided to leave the nearby FAME Studios in Muscle Shoals to create their own recording studio. The four Swampers are Barry Beckett (keyboards), Roger Hawkins (drums), Jimmy Johnson (guitar) and David Hood (bass). They were the first rhythm section to own a studio and eventually run their own publishing and production companies. Their backing and arrangements have been heard on many recordings, including major hits from Wilson Pickett, Aretha Franklin, and the Staple Singers, but a wide range of artists in popular music also recorded hit songs and complete albums at the studio. Among them are The Rolling Stones, Traffic, Elton John, Boz Scaggs, Willie Nelson, Paul Simon, Duane Allman, Bob Dylan, Bob Seger, Dr. Hook, Cher, Elkie Brooks, Millie Jackson, Julian Lennon, and Glenn Frey. 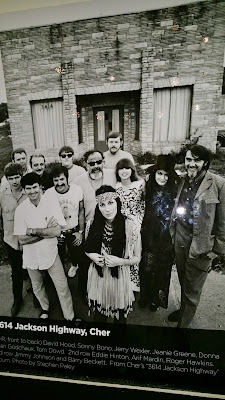 A $1,009 receipt written out to the Rolling Stones for recording 'Wild Horses' was posted on the wall. 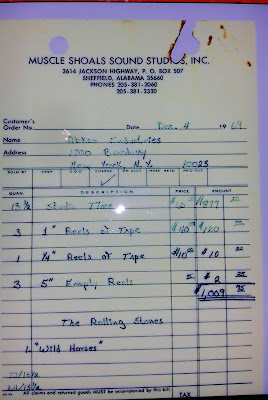 The Swampers were given their nickname by Leon Russell because of a small pond near FAME Studio that looked somewhat like a swamp. According to a story we heard, many artists were surprised when they met The Swampers - because of their unique sound it was assumed that they were a black group. For example, when Paul Simon showed up to record he expected black musicians and assumed he had been introduced to the office staff. He politely asked to "meet the band". Once things were sorted out, Simon recorded a number of tracks with the group, including "Loves Me Like a Rock", "Kodachrome" and "Still Crazy After All These Years" 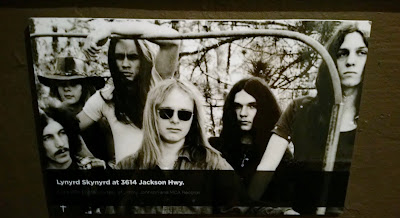 When Lynyrd Skynyrd recorded at the Studio early in their career they saw all the platinum and gold records bearing the words 'To The Swampers' on the walls. They then included them in the song 'Sweet Home Alabama' as a tribute.

Muscle Shoals has got the Swampers
And they've been known to pick a song or two
Lord, they get me off so much
They pick me up when I'm feelin' blue. 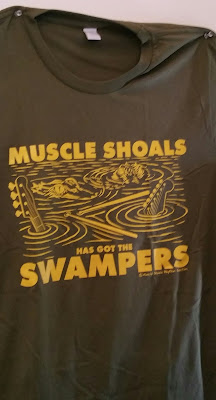 Not only did we get to hear all the great stories about The Swampers, but as luck would have it Jimmy Johnson was in the Studio on the day we toured. We were able to hear him talk a bit about the old days and he answered some questions from his fans. John and Dena got a nice photo op with him. 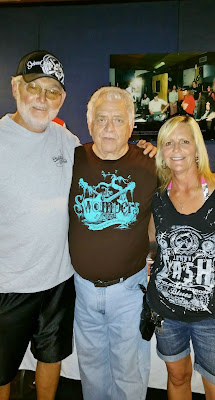 A tour bus pulled up as we were finishing our visit and it got a bit crowded. So nice to see how many people are interested in this bit of musical history. 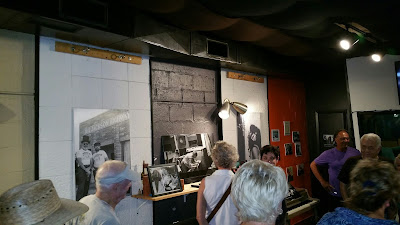 Before we left one of the guides told us to check out the basement where the musicians hung out between takes. Oh, the stories those walls could tell if they could talk.

There's an excellent documentary that we would highly recommend called simply "Muscle Shoals." Filmmaker Greg Camalier premiered it at the Sundance Film Festival in January 2013. It's about FAME Studio and its founder Rick Hall,  and how the Swampers left FAME and founded the Muscle Shoals Sound Studios, The documentary includes interviews with Bono, Alicia Keys, Aretha Franklin, Etta James, Mick Jagger, and Keith Richards. Some critics thought “Muscle Shoals” should have been nominated for an Academy Award for Best Documentary. Really a great film that covers so much more than I could in this blog. Johnny Depp and Richard Branson are working with some of the people who worked on the documentary to produce a TV series about Muscle Shoals.

The map below shows the location on Muscle Shoals. Red Bay is southwest of it near the Mississippi - Alabama border.