Back in San Miguel de Allende with the Giant Heads 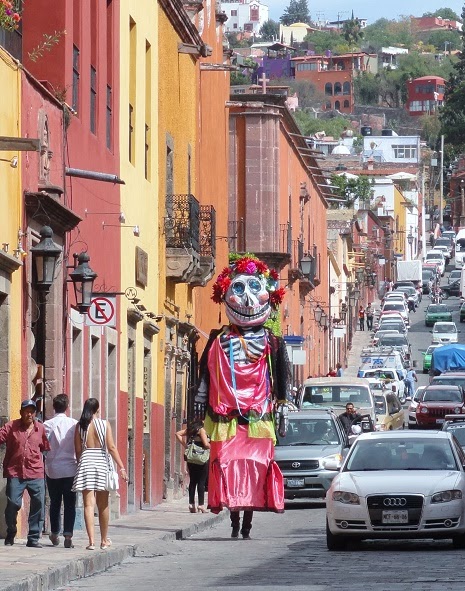 Although we seem to spend quite a bit of time in San Miguel de Allende on our winter journeys we have never before seen this sight coming down the street. We started calling them Giant Heads but did a bit of research and found that the proper name is Mojigangas and they have a pretty interesting story.  The mojigangas do more than just walk down the street to have their pictures taken with the tourists. They are an essential part of fiestas that take place in San Miguel. One month before the eve of Independence Day they gather at the cemetery to ask the spirits to bless their upcoming efforts. The following day they dance in the jardin to let people know the fiestas are almost here. 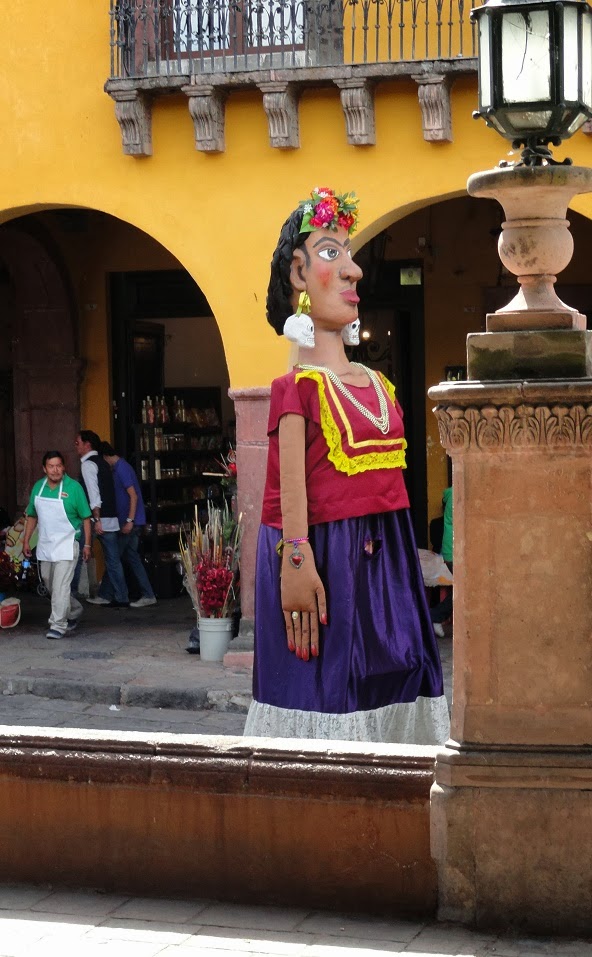 Historically, figures similar to these were brought to Mexico by the Spaniards around 1600. During this time the Mojigangas were used in religious pilgrimages but were also fashioned as effigies to ridicule public figures. Seems that could be true now as well.

More pictures and information about the mojigangas can be found at  http://www.zocalotx.com/MOJIGANGAS.htm 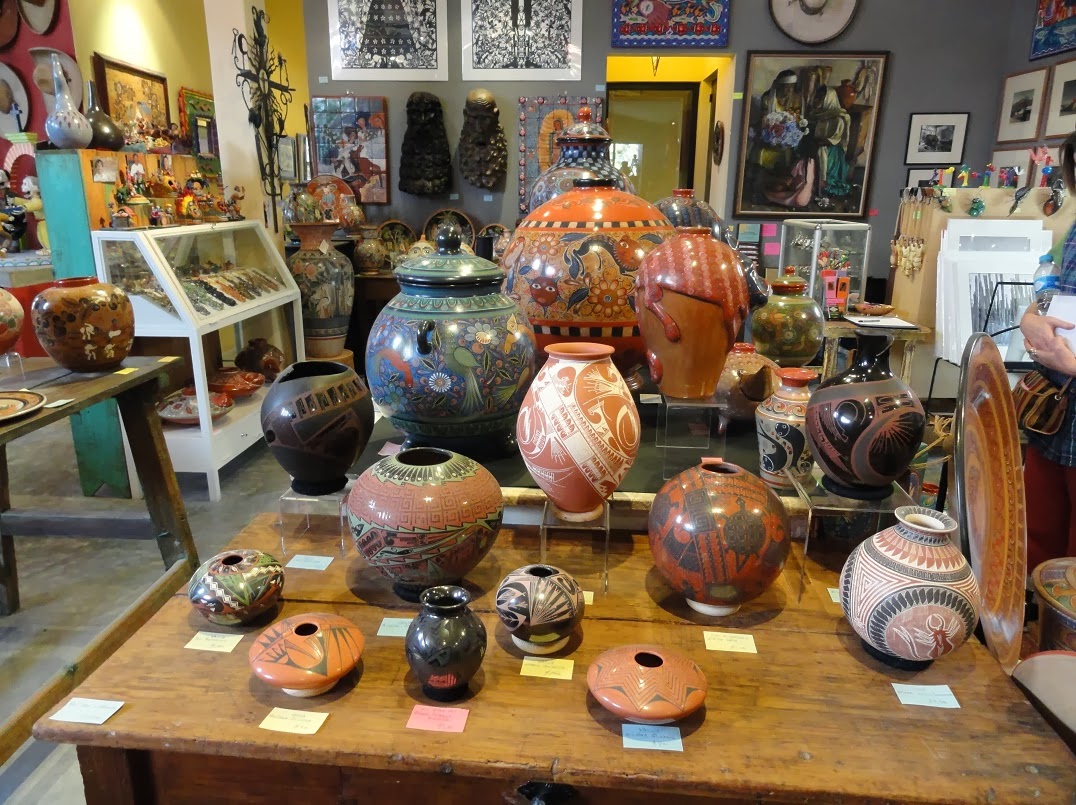 We had an opportunity to attend an open house at Galeria Atotonilco. We went there last year, and I blogged about it here   Atotonilco blog   It was just as amazing this year, with an incredible amount of arts and crafts from all over Mexico.

It was really fun to find work in the gallery by an artist we visited this year. When we were at Roca Azul in January we took an interesting day trip we called the Cajititlan Loop. One of the stops we made was at the home and workshop of a well-known potter named Martin Ibarra Morales. He had some of the most exquisite virgin statues that I have ever seen and I ended up buying one. There's more about him and more pictures at Cajititlan Loop Day Trip 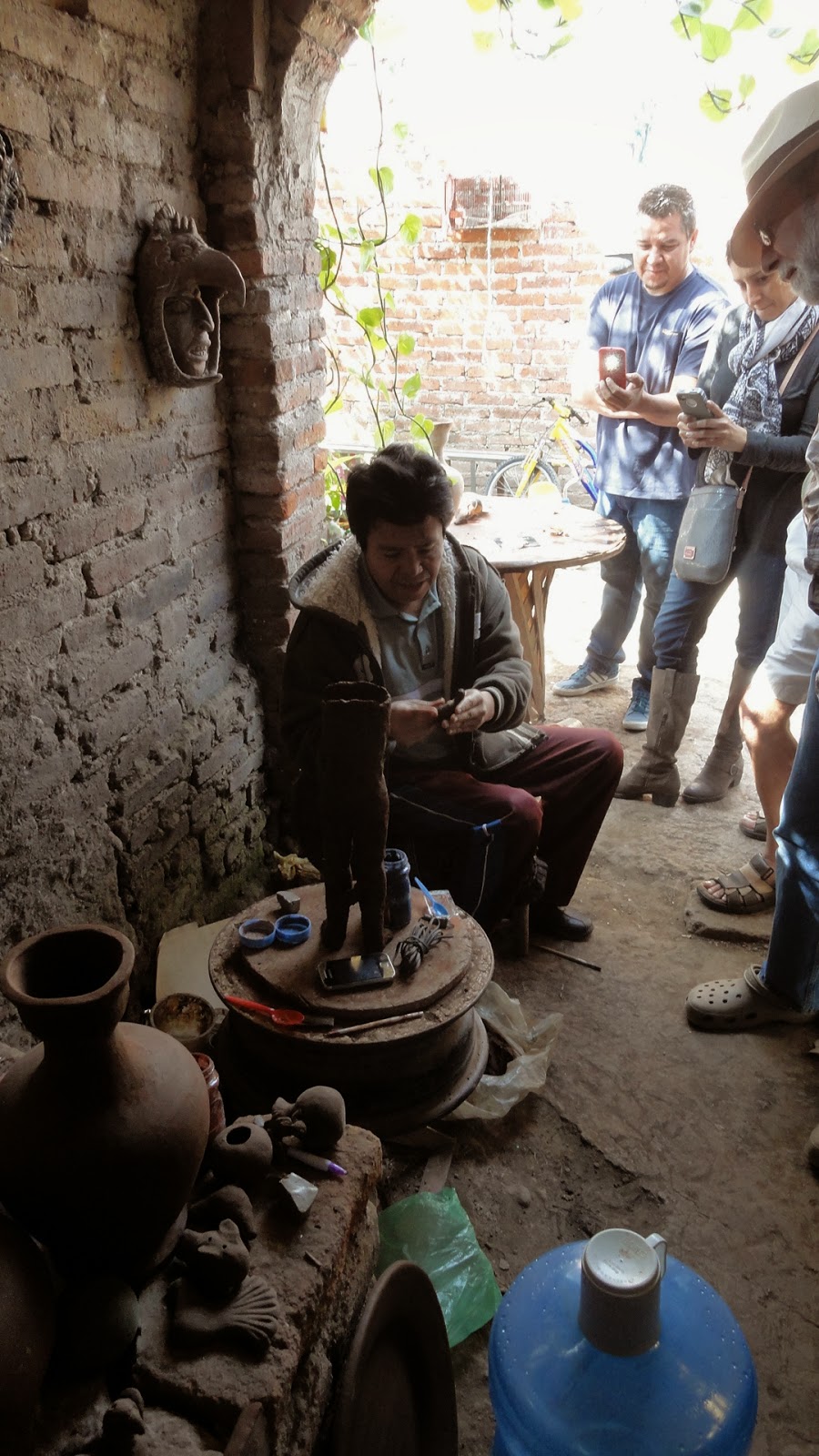 I was lucky enough to be able to purchase my virgin statue directly from Martin. Three of his virgins are displayed on the table below.  The prices on them were much higher than I paid for mine. Nothing like buying directly from the artist. Martin's picture is with the virgins. 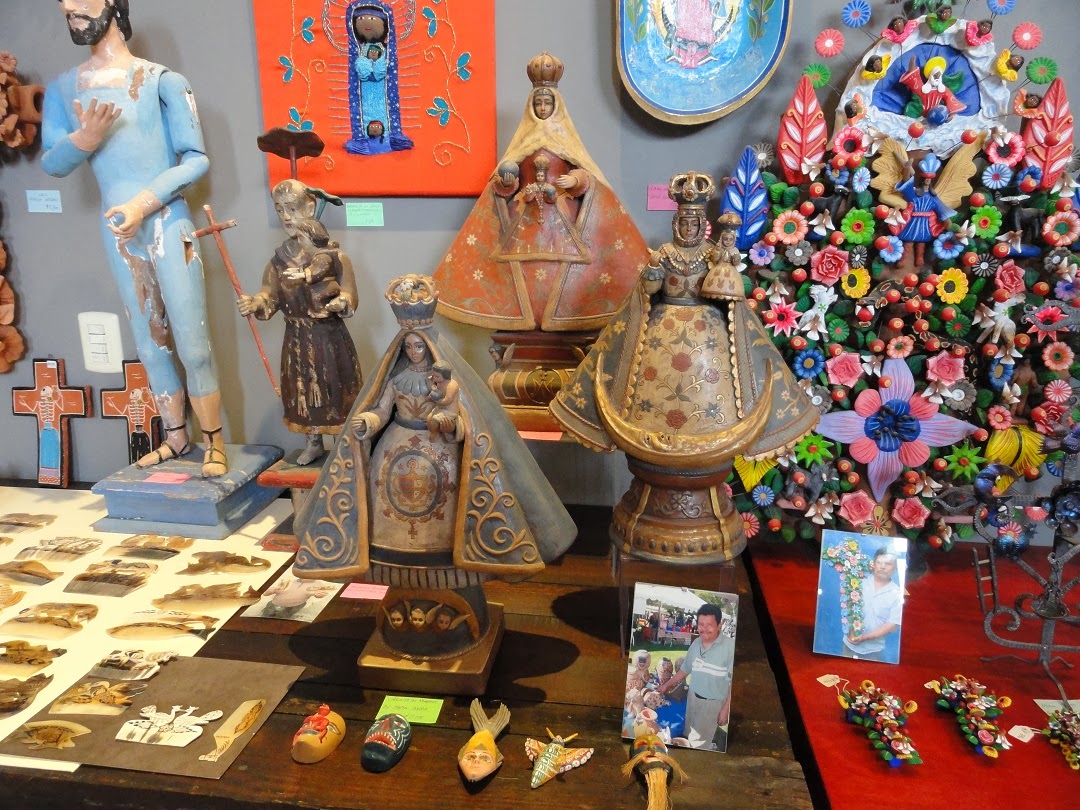 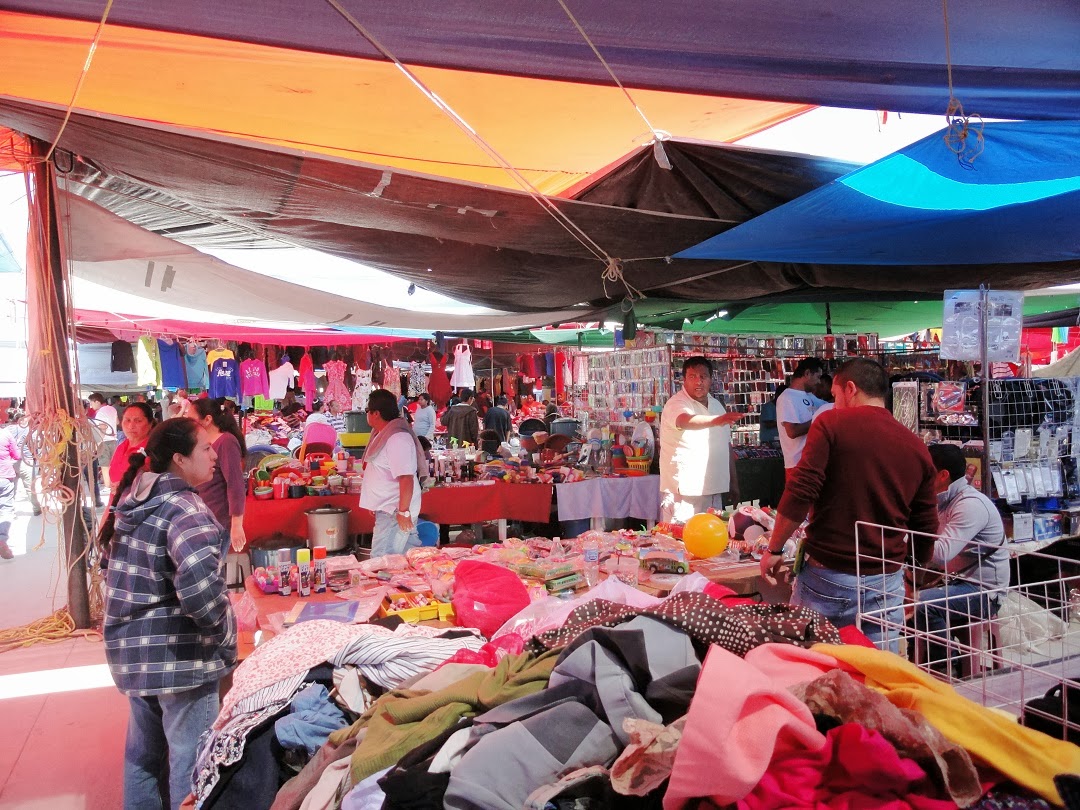 San Miguel has what is known as a 'Tianguis, or open air traveling market, on Sundays and Tuesdays. Vendors come in and set up their stalls in the morning, work all day, take them down that evening, and move on to the next town the following day to do it all over again. It looks like soooo much work.
One estimate of the size of the Tuesday Tianguis is about three football fields and I would concur. The Sunday Tianguis is about half that size. The San Miguel Tianguis is in a permanent spot that has poured concrete pads, poles to tie the tarps or ceiling covers to, electricity, and water. It's like a little town that springs up twice a week.
We love to wander around and look at all the stalls offering an amazing variety of merchandise. As we stroll along we get some of the most enticing smells from the food stands and of course have to try things out. Great food and great prices. This place was a favorite - note the rotating barbecue skewer. Seasoned meat is shaved off, quickly grilled and served in a couple of different ways. 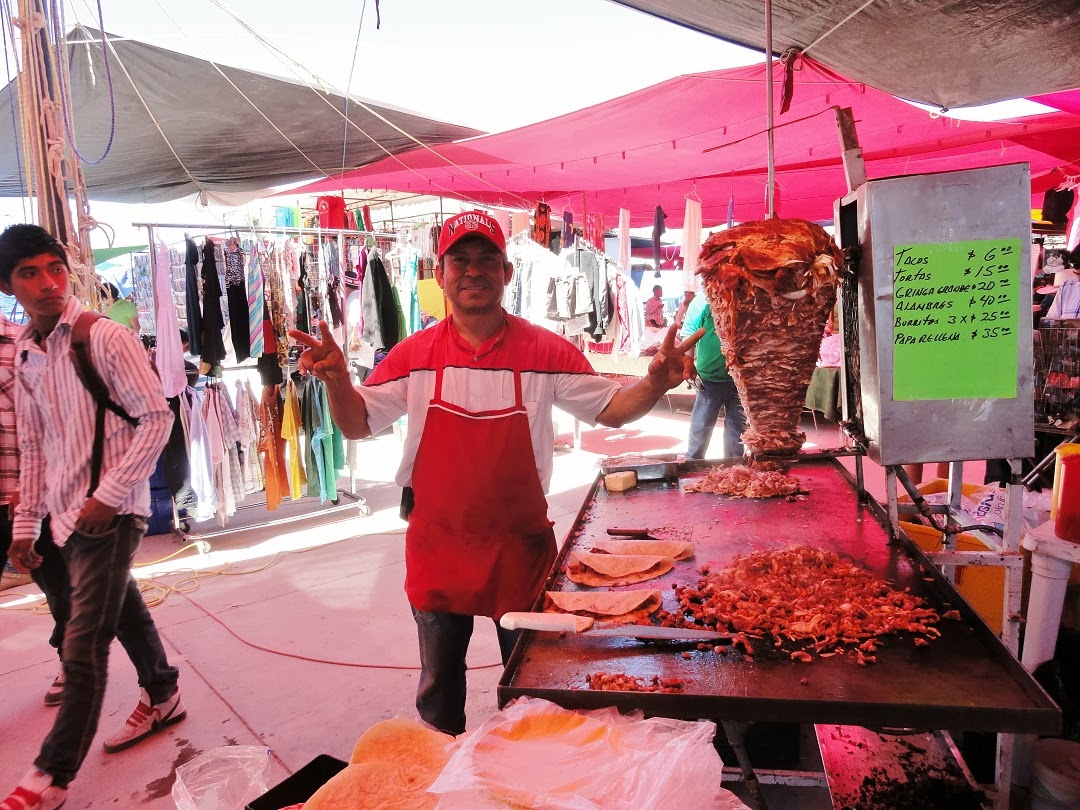