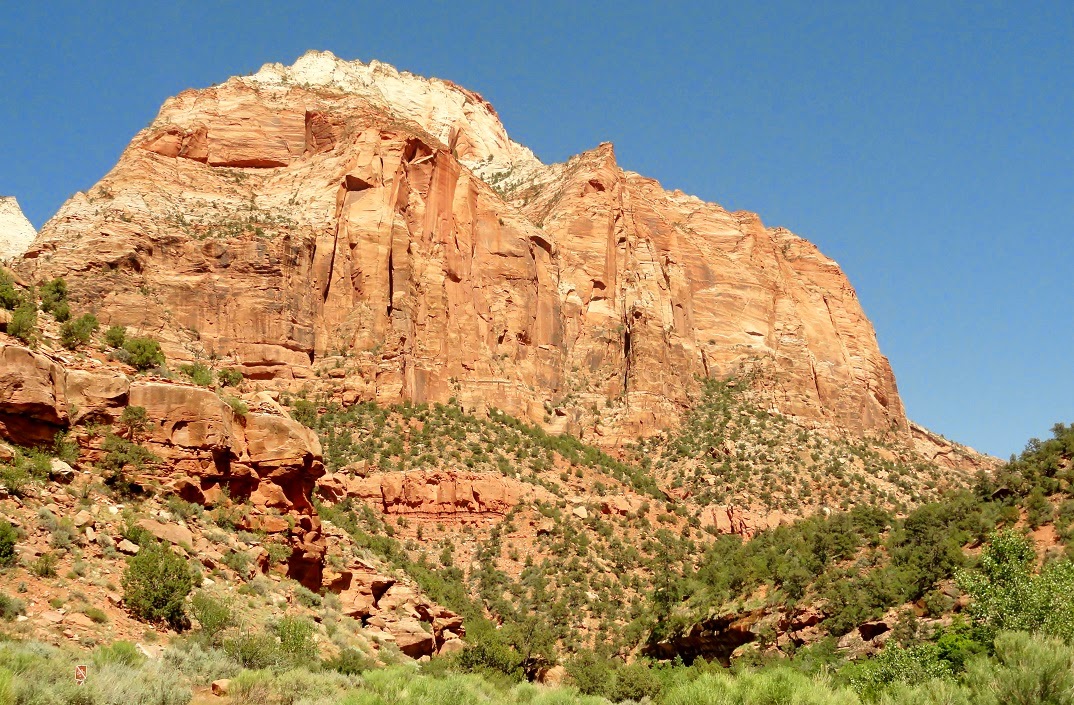 Zion is Utah's first national park and also its most heavily used park. Its most prominent feature is Zion Canyon, which is 15 miles long and up to half a mile deep, following the course of the Virgin River. The entire landscape is a fascinating combination of multi-colored rocks and cliffs that chronicle its development over millions of years. 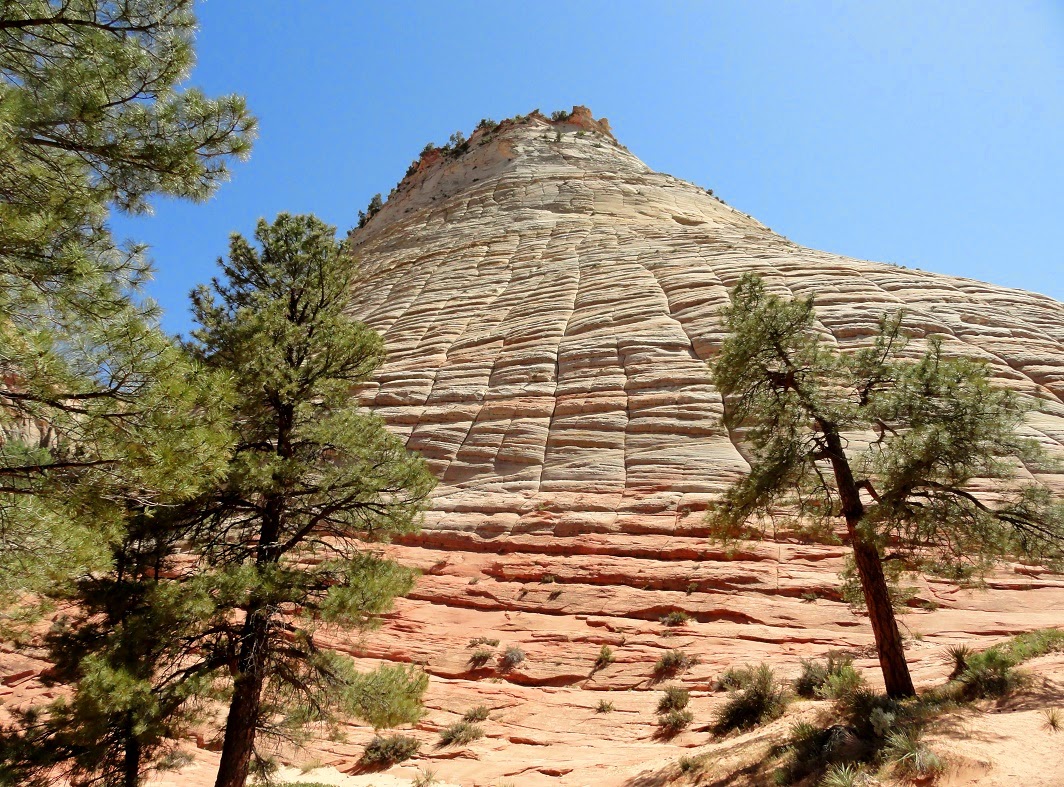 We entered Zion on the east side, where many of the rocks look like mud that has flowed and then hardened with lines running every which way. The formation above is called Checkerboard and has a series of lines or grooves running in both horizontal and vertical directions which is very unusual.
After driving through this surreal landscape we came to the Zion Tunnel which is slightly over one mile long and took three years to complete. At the time that the tunnel was dedicated, on July 4, 1930, it was the longest tunnel of its type in the United States. It cuts through solid rock and is an impressive accomplishment. 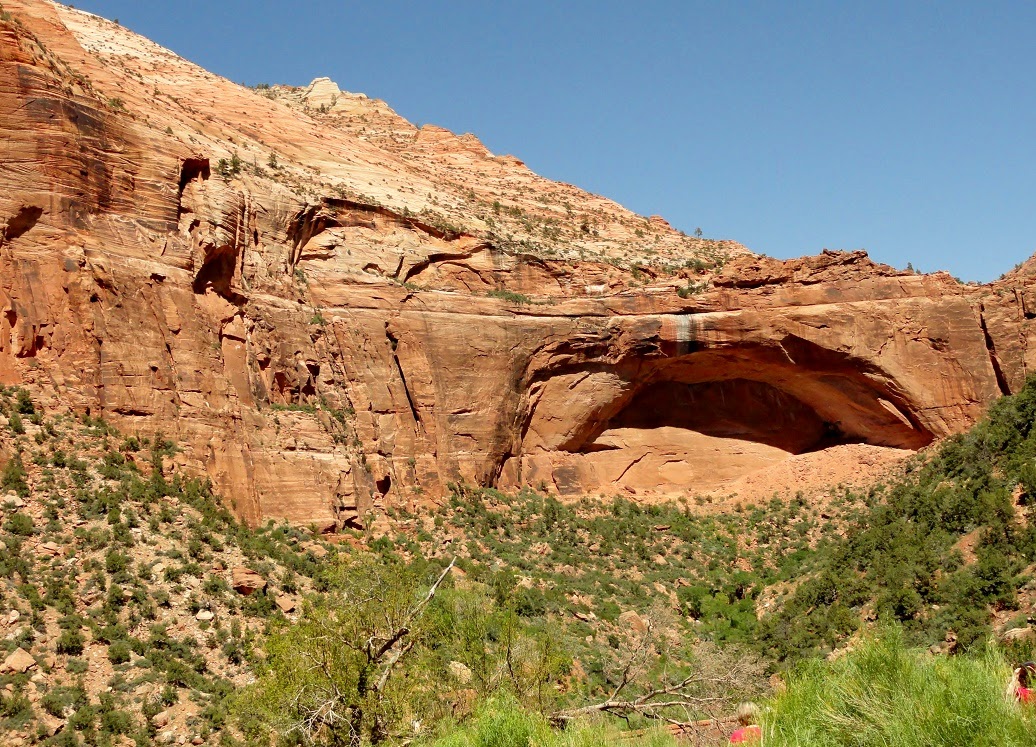 When we exited the tunnel we saw a different landscape with taller formations and more of the red Navajo sandstone. There are many places in the rocks, such as the one above, where we could see the beginning of arches. The cliffs are spectacular, rising to dizzying heights. 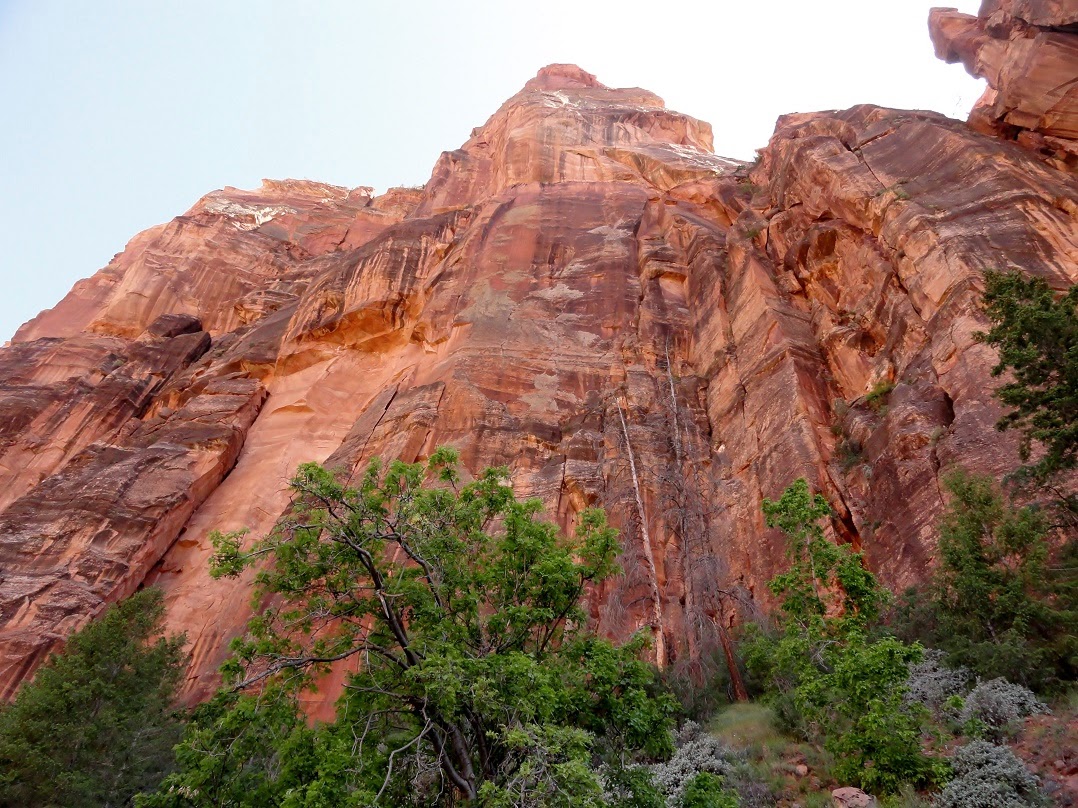 In order to lessen the impact of visitors, Zion has a shuttle bus system that goes up the Zion Canyon Scenic Drive. It is free and provides access to some of the park's most beautiful views and trails. We began by taking the shuttle to the top of the canyon and took the Riverside Walk which is a little over a mile each way. Along the trail we saw some 'weeping walls' where water was seeping out and down the rocks. There was a variety of vegetation on the walls, including several types of flowers including the Golden Columbine and Orange Columbine. 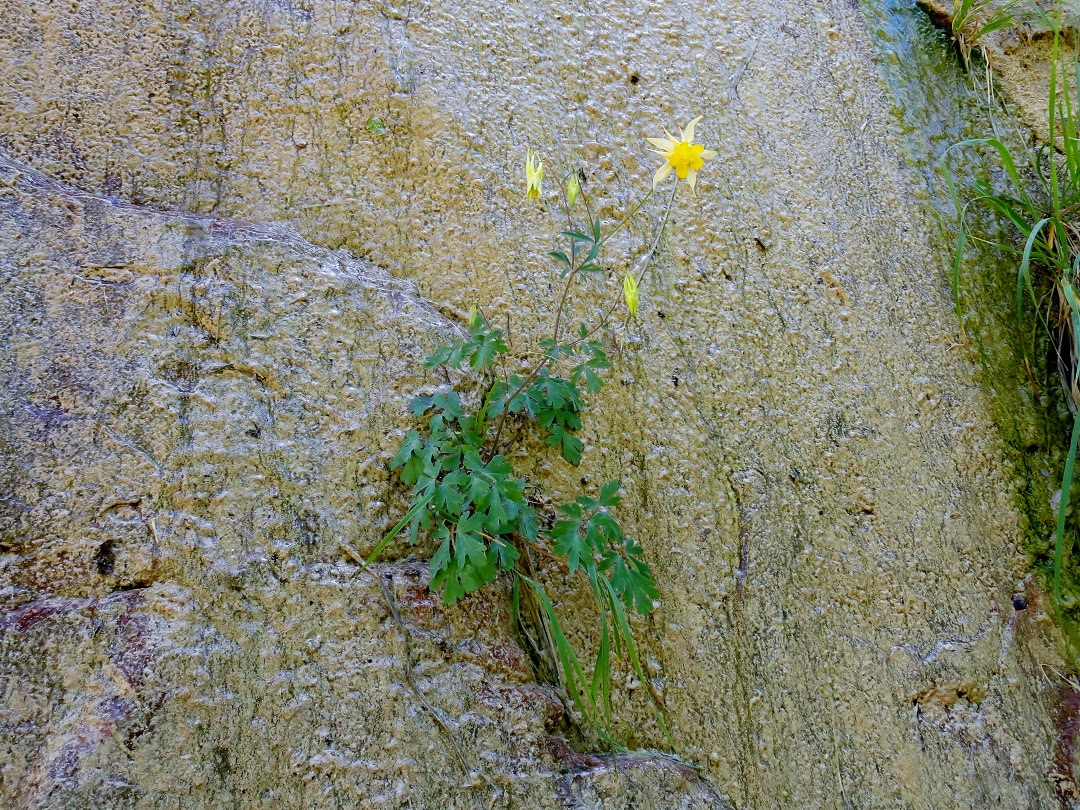 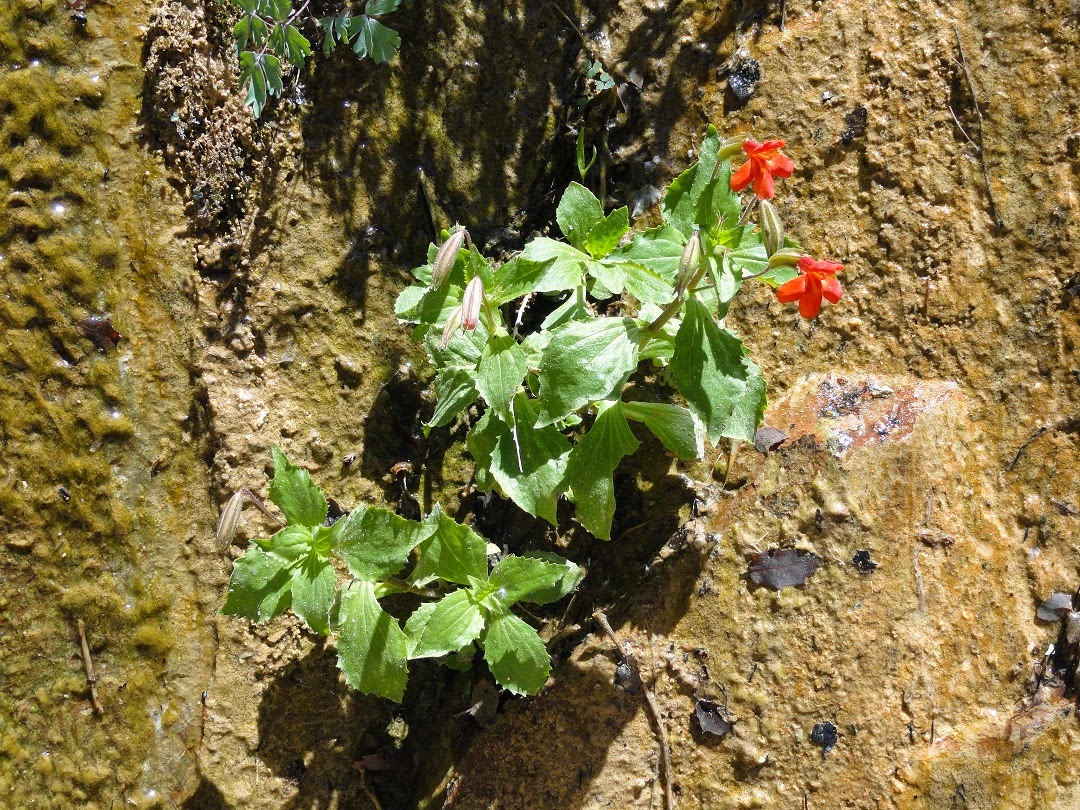 We arrived at the end of the walk in a place called the Narrows. It's possible to hike up the Narrows but approximately 60% of the walk is in the water. Kind of cold for this time of year. There is no trail because the route is the Virgin River. It's a hike that requires good planning and the proper equipment to get to the gorge itself, which is a mile up the river. 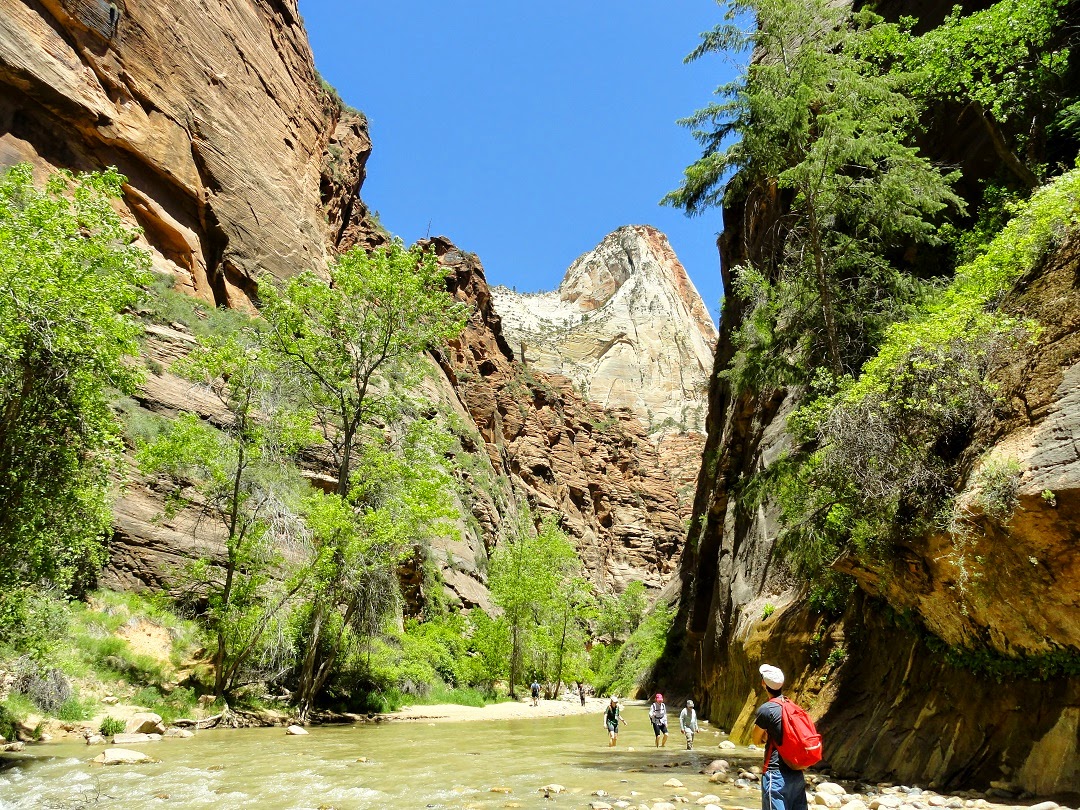 After getting back on the shuttle there were another nine stops on the way back to the Visitor Center. Each stop provided different views and hiking options, and the ride itself was pretty spectacular. We could easily spend more time exploring Zion and hopefully will return.

While touring Zion we stayed in Kanab, Utah. Our route from Flagstaff to Kanab was 210 miles. We went past Lees Ferry where the rafts going down the Colorado River through the Grand Canyon launch. We also went through Jacobs Lake where to road to the North Rim of the Grand Canyon begins. 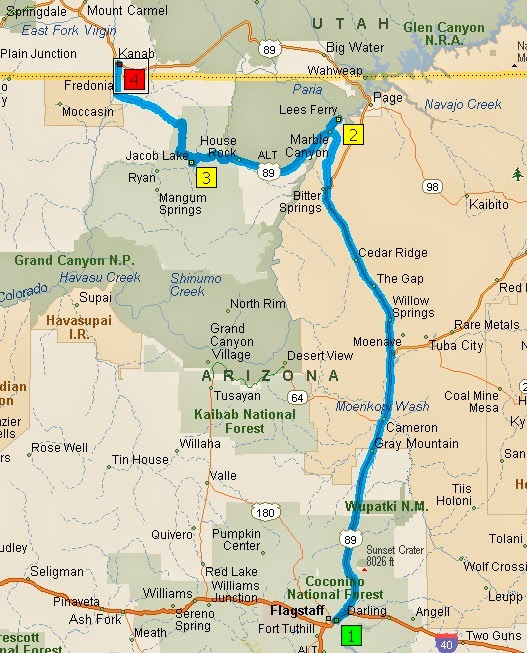 It's 42 miles from Kanab to the Zion Visitor Center. 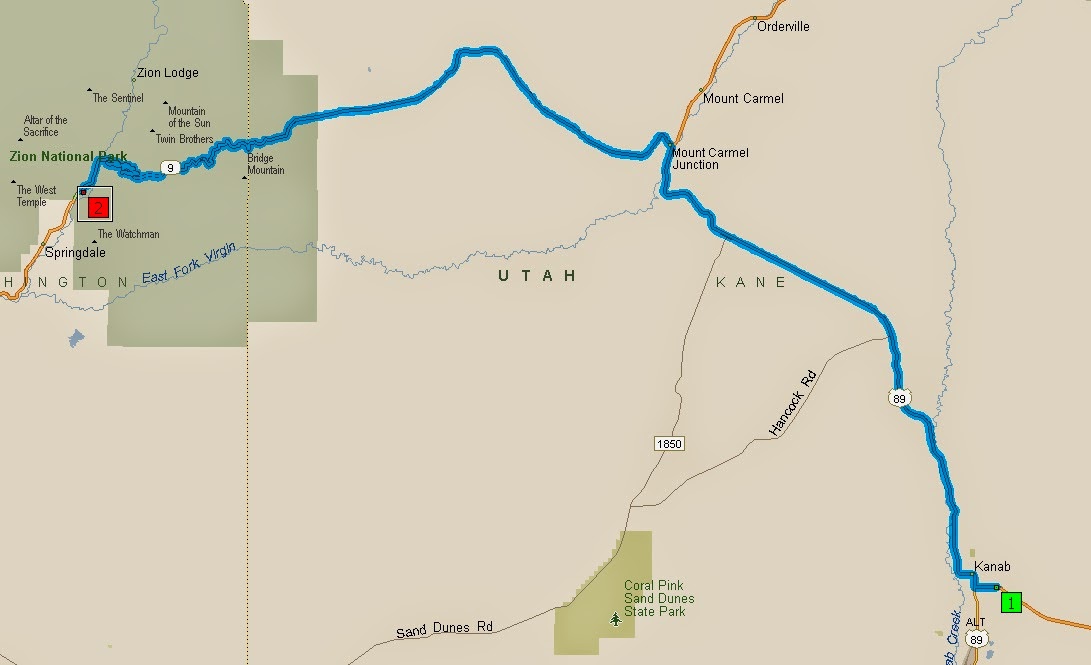