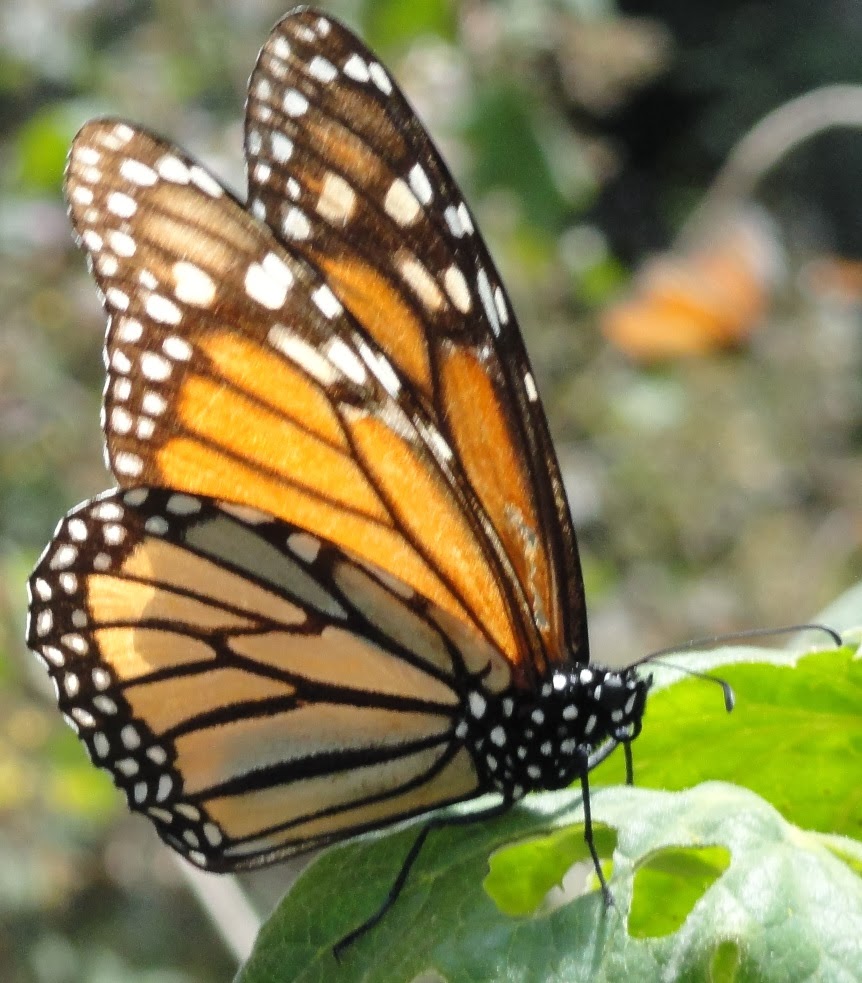 "Have you been to see the butterflies?" When talking with fellow RVers in Mexico it seems this question always comes up. We can finally reply "YES." We have wanted to go to the Santuario Mariposa Monarca, Monarch Butterfly Reserve, for years but couldn't figure out the best way to do it. We finally figured it out and are now able to knock it off our bucket list. It was a magical experience to say the least.

The Reserve is located in the easternmost part of the state of Michoacan, northwest of Mexico City. It is in a stretch of mountainous forests that provide what is needed for the wintering monarchs. 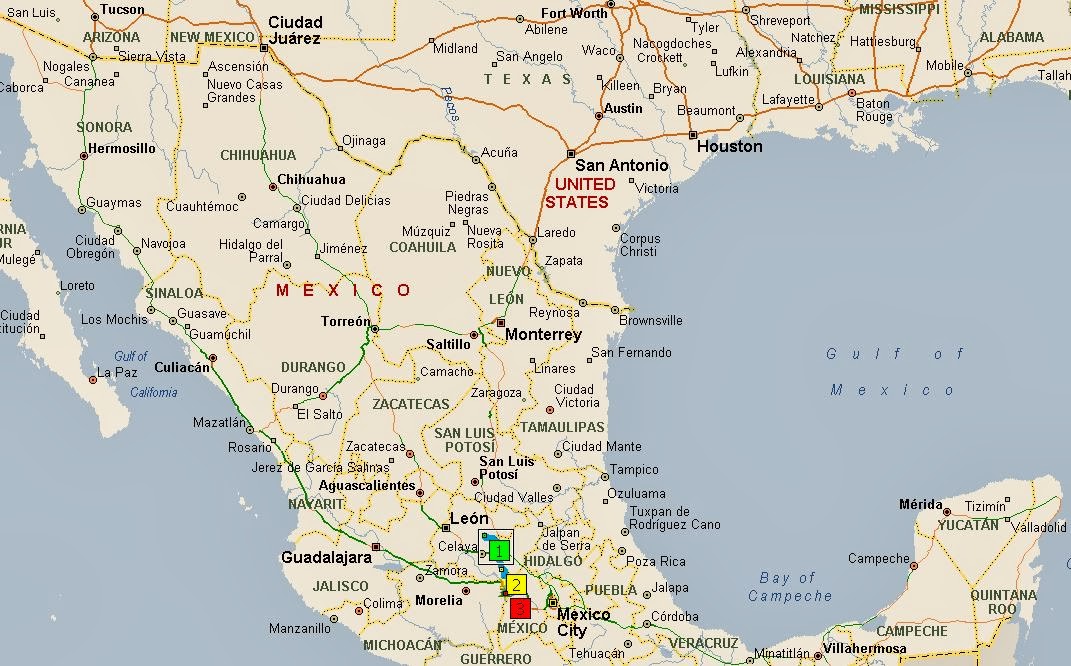 We were fortunate to join some fellow RVers  in San Miguel de Allende on a guided day trip to the Reserve. It was a long trip, about 3 1/2 hours each way, in a crowded van but fun nonetheless. Our route took us to the viewing location near Angangueo – about 145 miles from San Miguel. The highest point we reached according to our Garmin was about 11,200 feet above sea level. There is another viewing area outside the town of Ocampo where many tour buses visit. 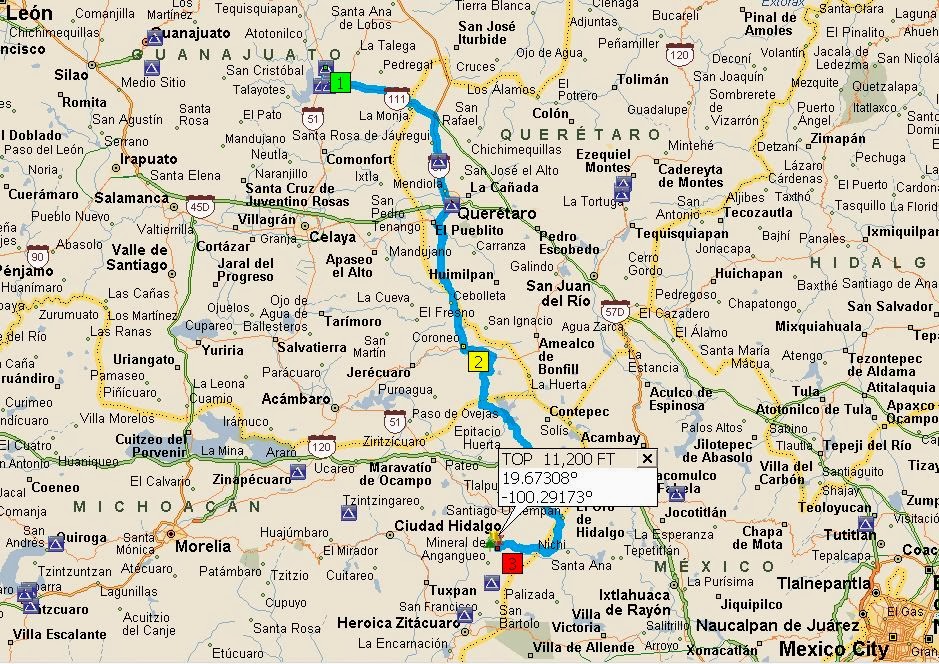 The sanctuary is 160 square kilometers and has been decreed a Reserva Especial de la Biosfera and World Heritage Site so it is a protected area. Protection of the area didn't begin until the 1980s and in 2000 it attained the status of Federal Biosphere Reserve. Within the Reserve there are at least 8 areas the monarchs are known to congregate. The public is only allowed to visit 2 of these areas.

It's estimated that anywhere from 60 million to 1 billion monarch butterflies come to the Reserve every autumn to mate. Today's number may be less than in the past due to a number of factors. The monarchs fly over 2,400 miles from the the Eastern US and Great Lakes region of the US and Canada to the Reserve. 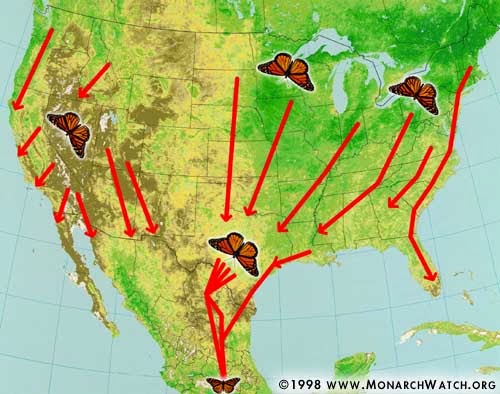 The monarchs' survival depends on the large number of habitats encountered to and from their annual migration from Canada, the United States and Mexico. These three countries adopted a plan in 2008 for the conservation of the butterfly’s habitat through its migration routes. In February 2014 when the President of Mexico met with the President of the US and the Prime Minister of Canada in Toluca, outside Mexico City, the plight of the monarchs was one of the topics to be discussed. Within the Reserve in Mexico, the greatest threats to the butterfly habitat are deforestation, illegal logging, unorganized tourism, forest fires and lack of cooperation among various authorities.

The monarchs arrive in late October or early November and leave in March, spending about 5 months in the Reserve. No one is allowed to visit the Reserve until late November so that the monarchs have time to form their colonies and begin their hibernation. They are very sensitive to any changes in their environment. We were told that when construction of some buildings in the parking area created too much noise the butterflies went down into the canyons to escape the noise, and very few people were able to see them that year.

When we arrived at the Reserve we decided to ride horses to the top of the mountain since we didn't feel quite ready for hiking at over 10,000 feet. I am not a horse person, so I was quite happy to get a horse that just followed the one in front of it. Thankfully all I had to do was hang on to the saddlehorn. 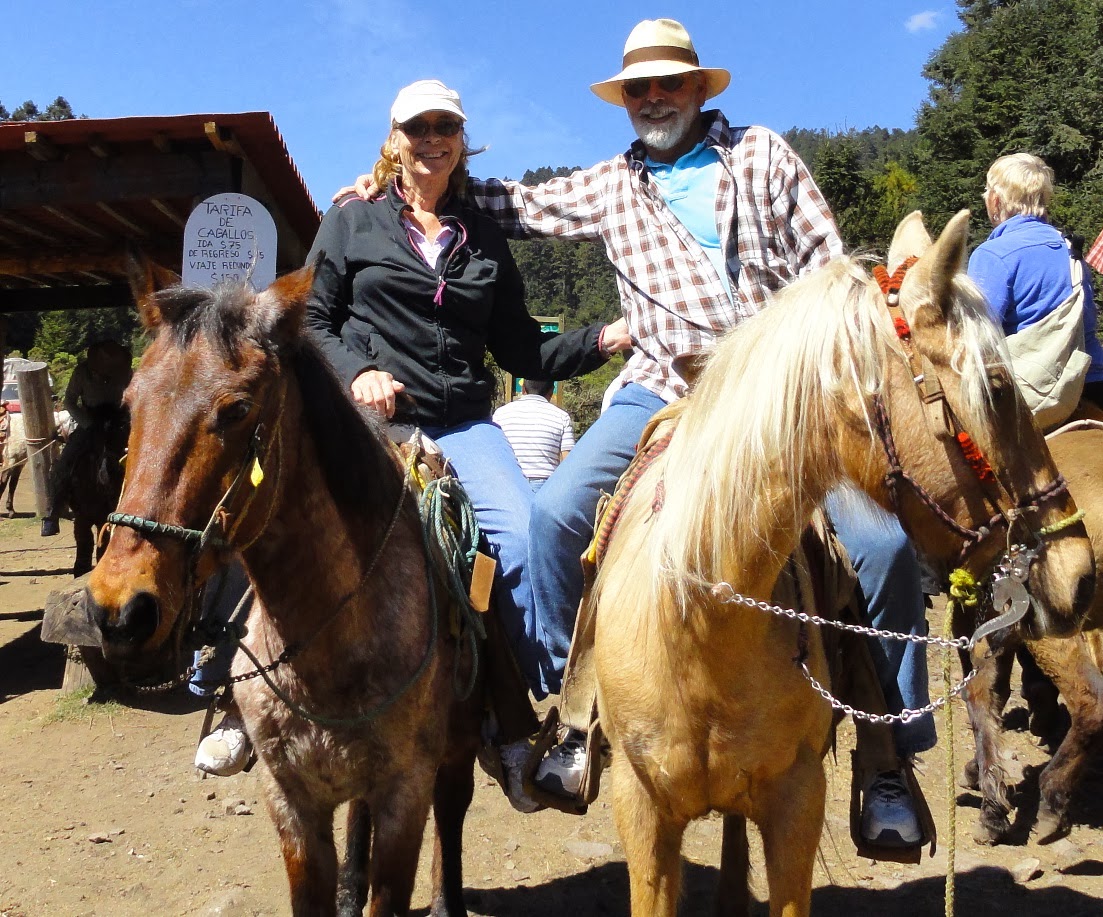 When we got up to the viewing area we were told to be silent. It was easy to do when surrounded by such majesty. It was still cool and there were clumps of thousands of butterflies in the trees, gathered together with wings folded, weighing down the branches. 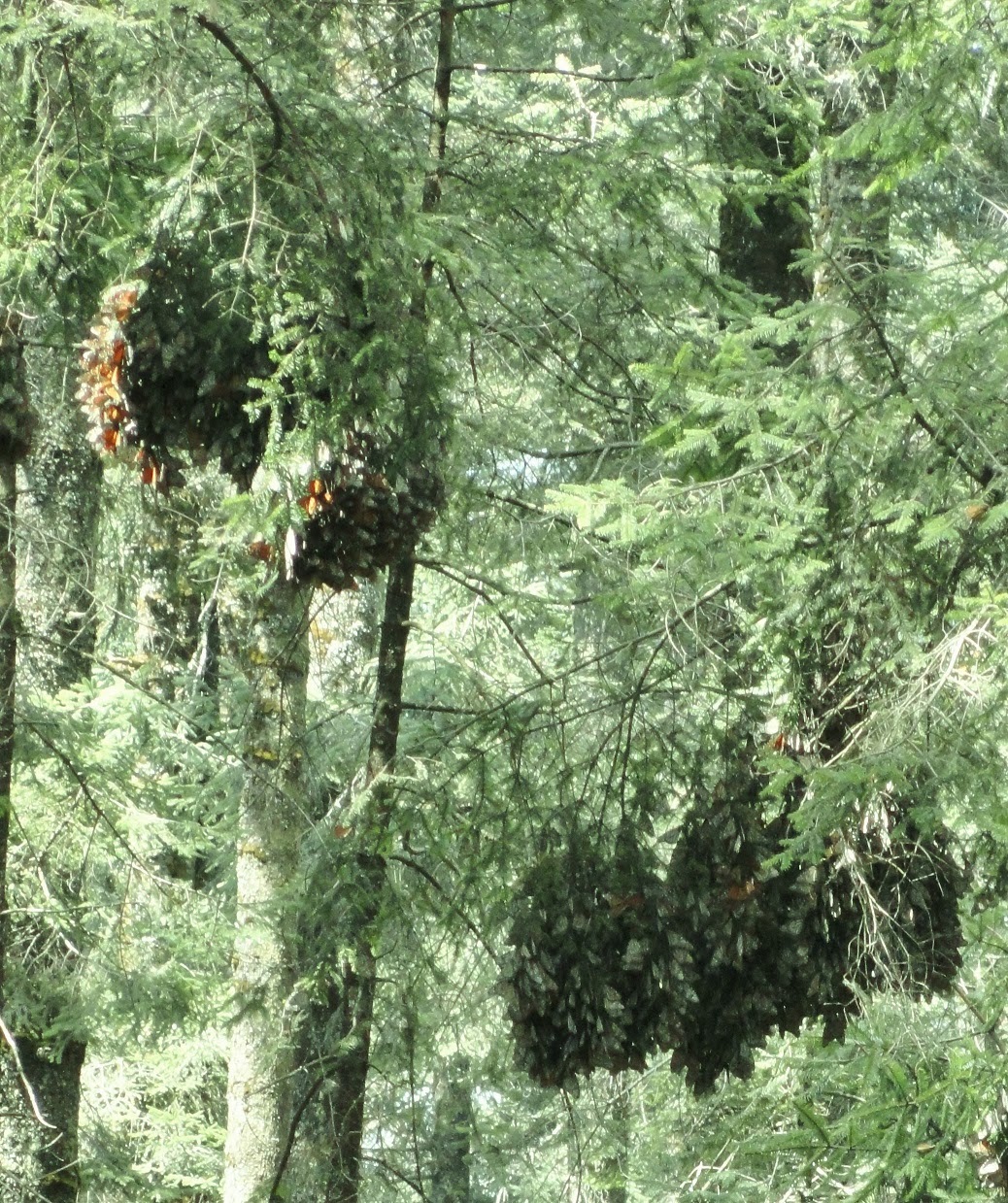 Typically when it gets warmer, usually sometime in mid-February, the monarchs come our of hibernation and begin to mate. We timed our visit just about right. 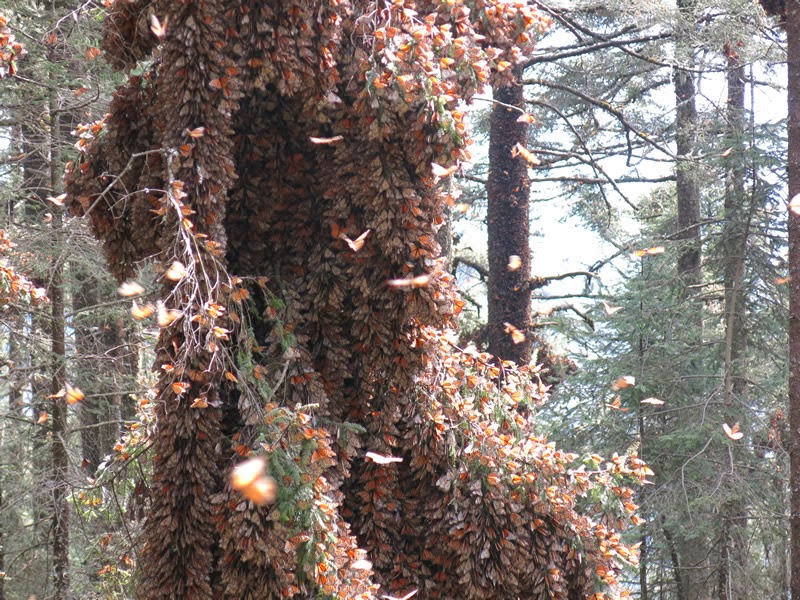 As the day warmed up they began to flutter around in the sun. It's an amazing sight and one that I can't do justice to with my camera. The sun caught their wings and flashes of gold and orange were everywhere. 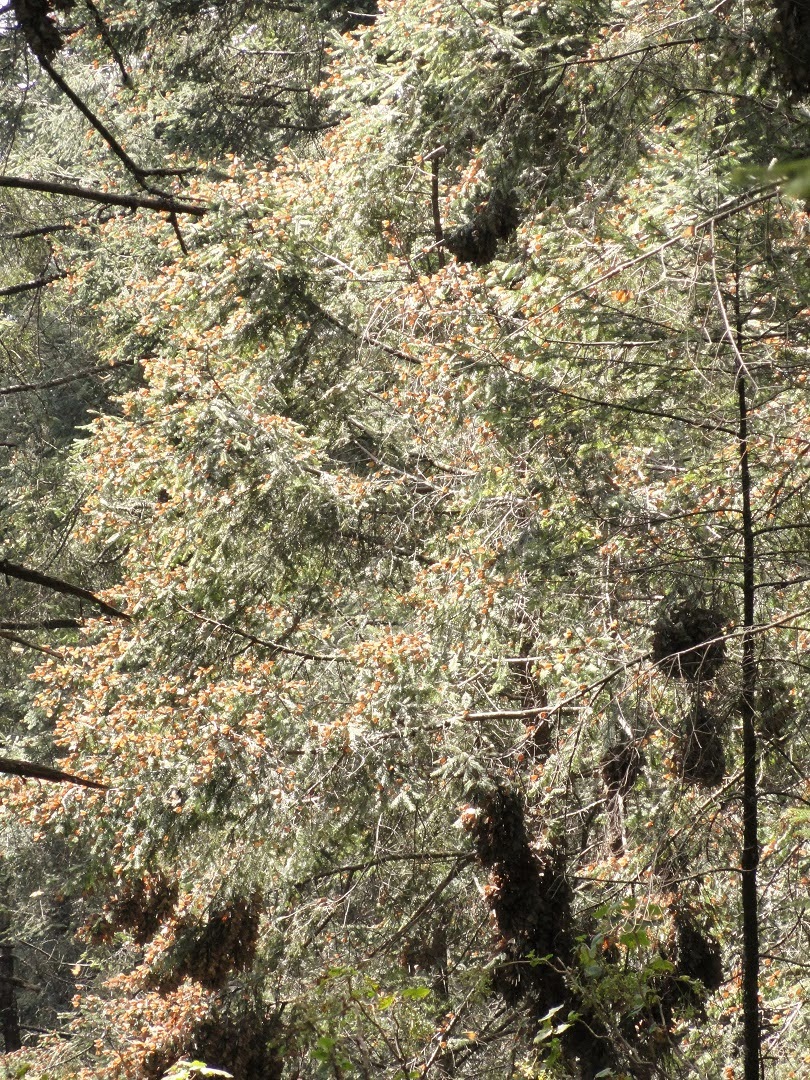 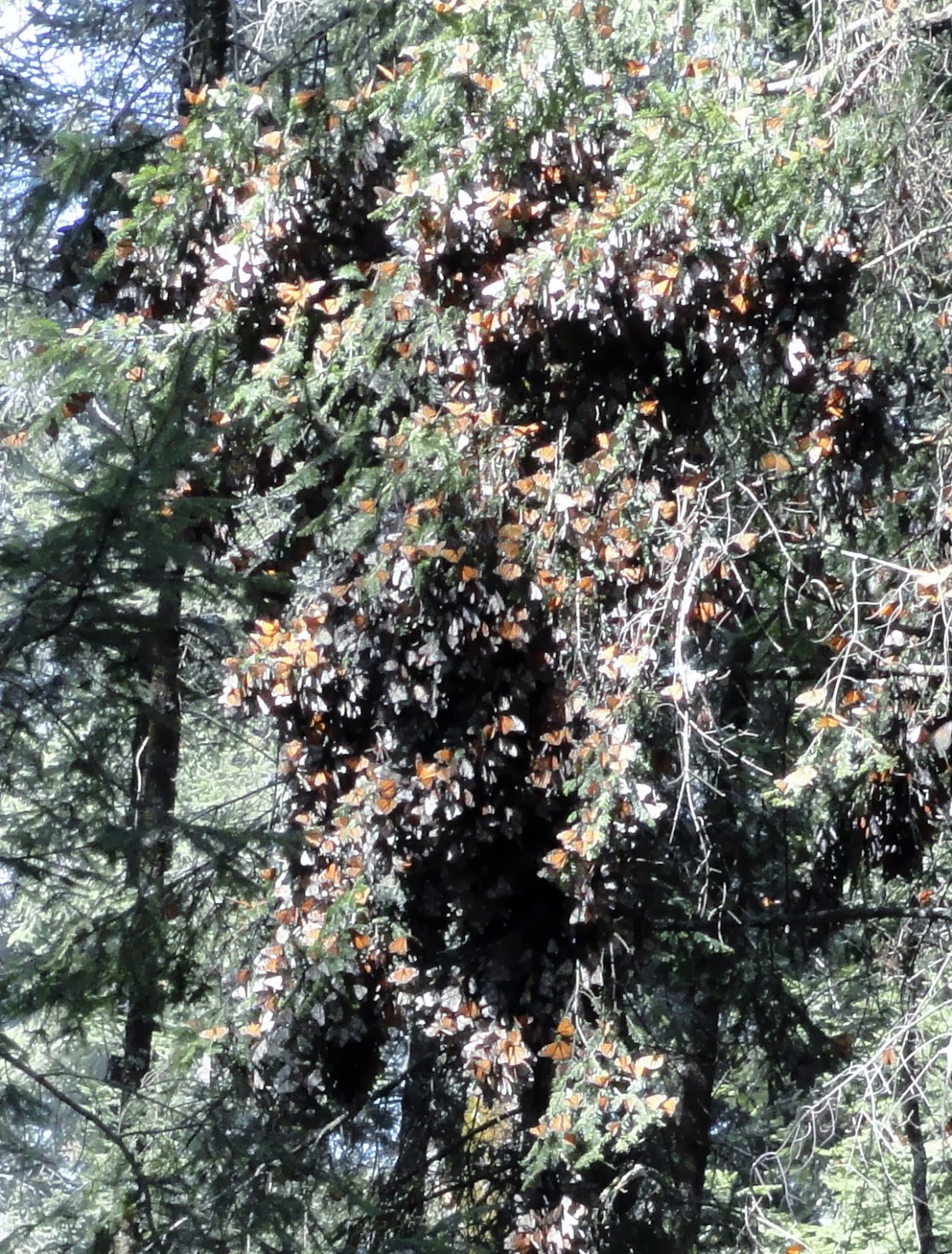 Our guide told us that it takes 3 males for every female when mating. It was difficult to find any information on this, but one website was helpful  http://www.learner.org/jnorth/tm/monarch/MatingDescription.html   It says that when the males mate they pass a package called a spermatophore which contains not just sperm but other nutrients needed by the female. This could explain the need to mate with more than one male. We saw the monarchs mating on the ground and when they finished they flew up into the sky with the males carrying the females underneath. Our guide called it 'the nuptial flight.' They stay coupled for many hours, often overnight, until the exhausted male dies.

The eggs hatch into caterpillars that feed on the milkweed, then make cocoons and emerge in late May as a new generation of monarchs. These first generation monarchs will mate, lay eggs, and die. Their eggs will start the cycle over again, each generation lasting about 8 weeks, as they make their way north the forests in the Great Lakes region. By mid-August a generation that is somewhat physiologically different emerges. This one is in kind of a suspended development so it is capable of making the long trip south to the Reserve. They drink nectar and catch warm air currents that allow them to soar instead of using powered flight as they go.

We recommend an excellent book by Barbara Kingsolver called Flight Behavior . It's a  New York Times Bestseller, and was declared "Best book of the year" by the Washington Post and USA Today.  The story is about what happens when the monarch butterfly's habitat in Mexico is destroyed and the butterflies migrate to the Appalachians. Interesting plot and characters but also a strong commentary on the effects of climate change.  http://www.kingsolver.com/books/flight-behavior.html

There is a wealth of information on the monarch butterfly. More links ...
http://mariposamonarca.semarnat.gob.mx

And the bad news
http://www.kingsolver.com/books/flight-behavior.html