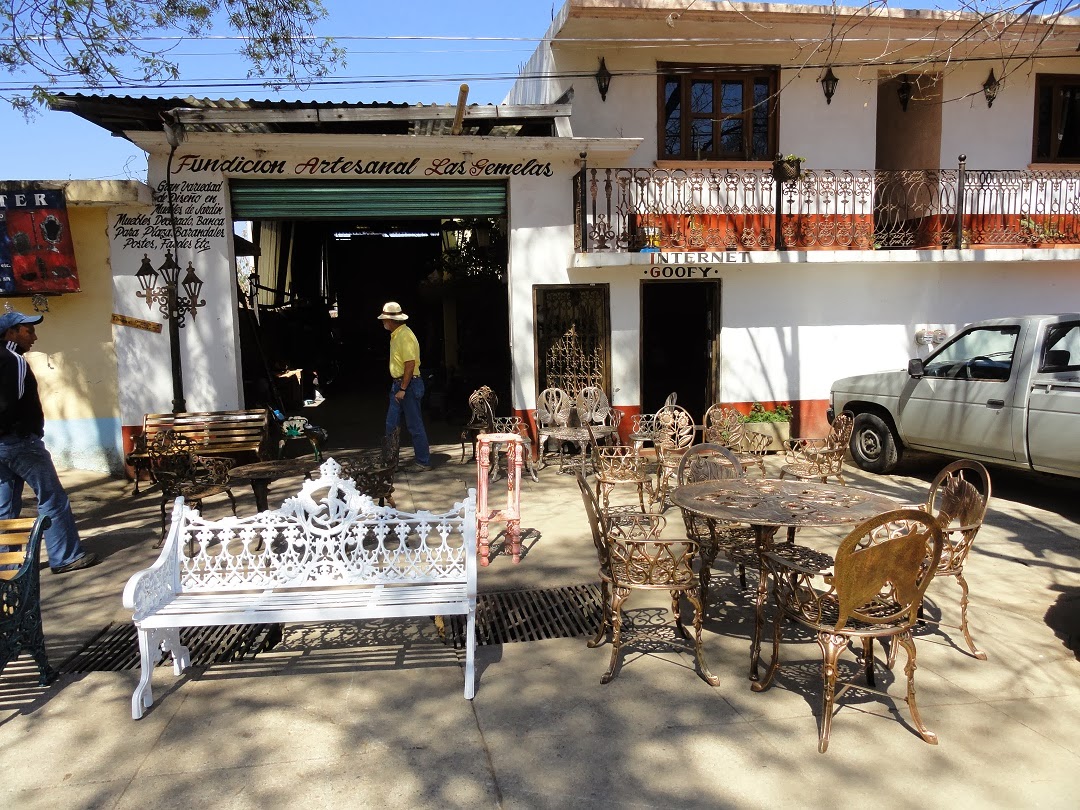 On the outskirts of Patcuaro, heading north along the east side of Lake Patzcuaro, is a small town called Tzurumutaro.  We have driven through it several times and been amazed at the amount of aluminum furniture that is made there. It was time to find out more about it. The first place we stopped, above, was a smaller fabrica (factory) and they were happy to show us around. We went a little further down the road and stopped at another place that was a lot bigger production facility. 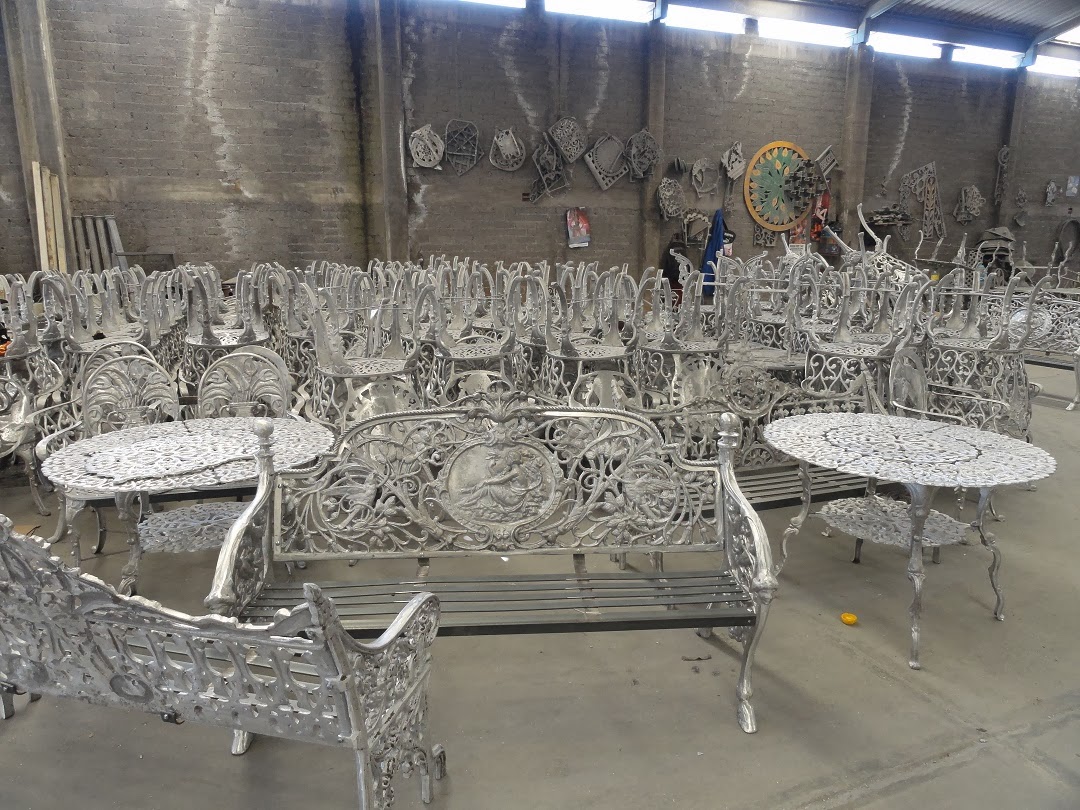 The finished products may have likenesses of flowers, birds, farm workers, fish, and any number of other artistic representations. They are very intricate, as seen in the close-up of the bench pictured above.

The metal working process seems to be pretty much the same in both places. It appears that they use a variety of aluminum pieces, everything from window frame scraps to used car wheels. 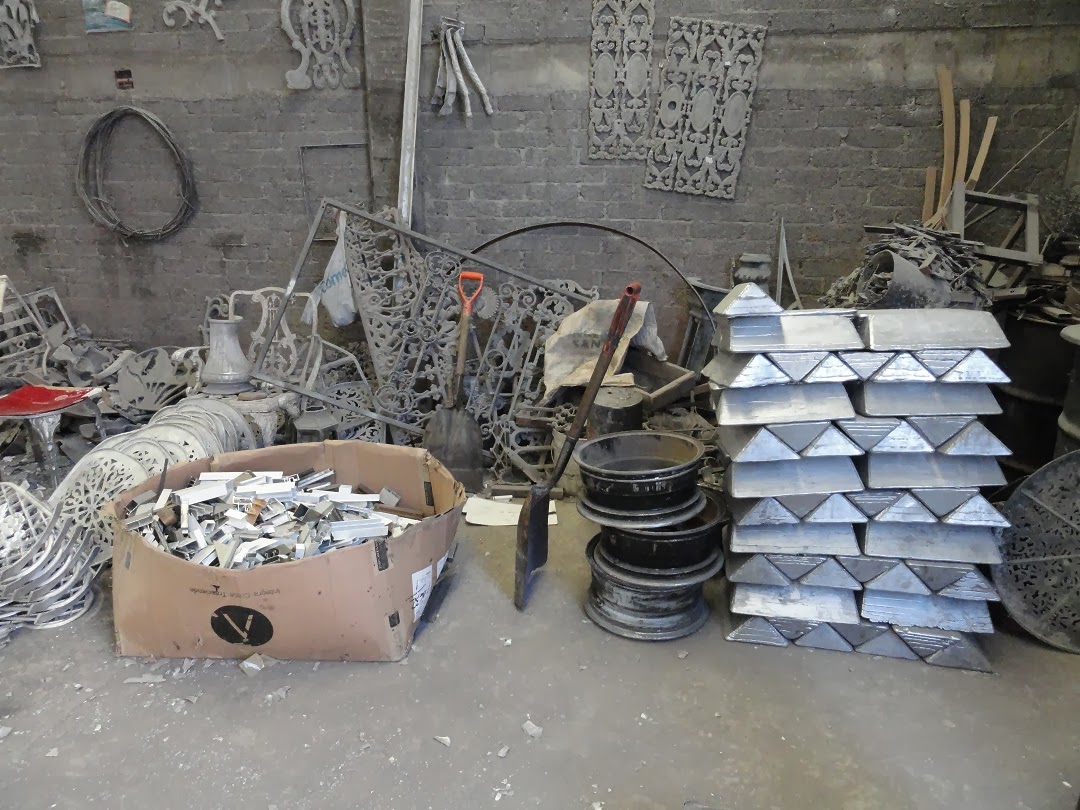 These pieces are then melted down in a forge. 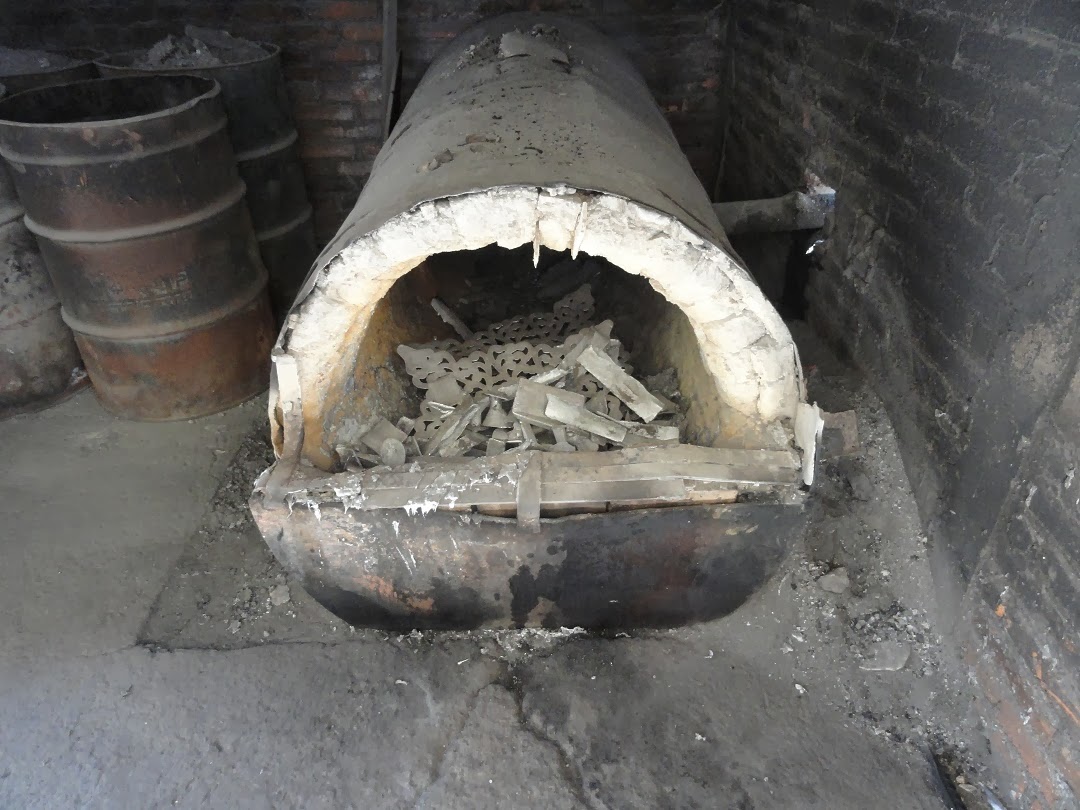 The forge is fueled by used motor oil. Once the aluminum is molten it is poured into molds. 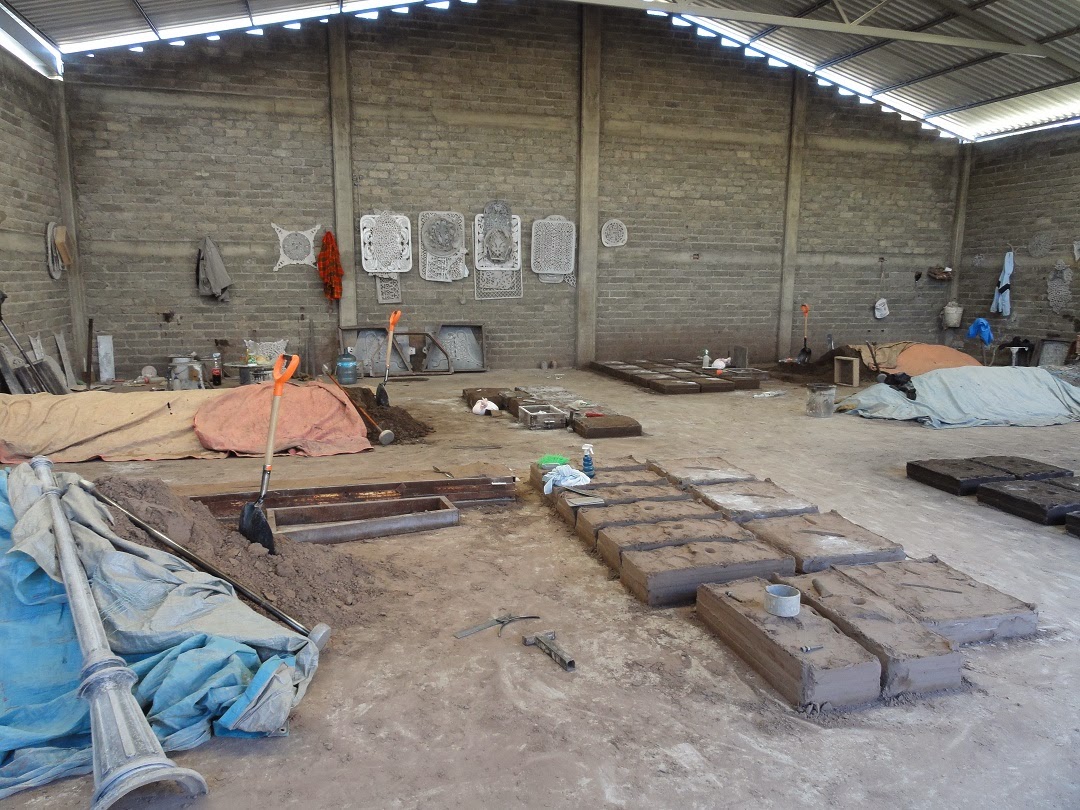 After it is cooled and removed from the molds the pieces are filed or ground down, assembled and ready to sell. The pieces can be disassembled for transport. 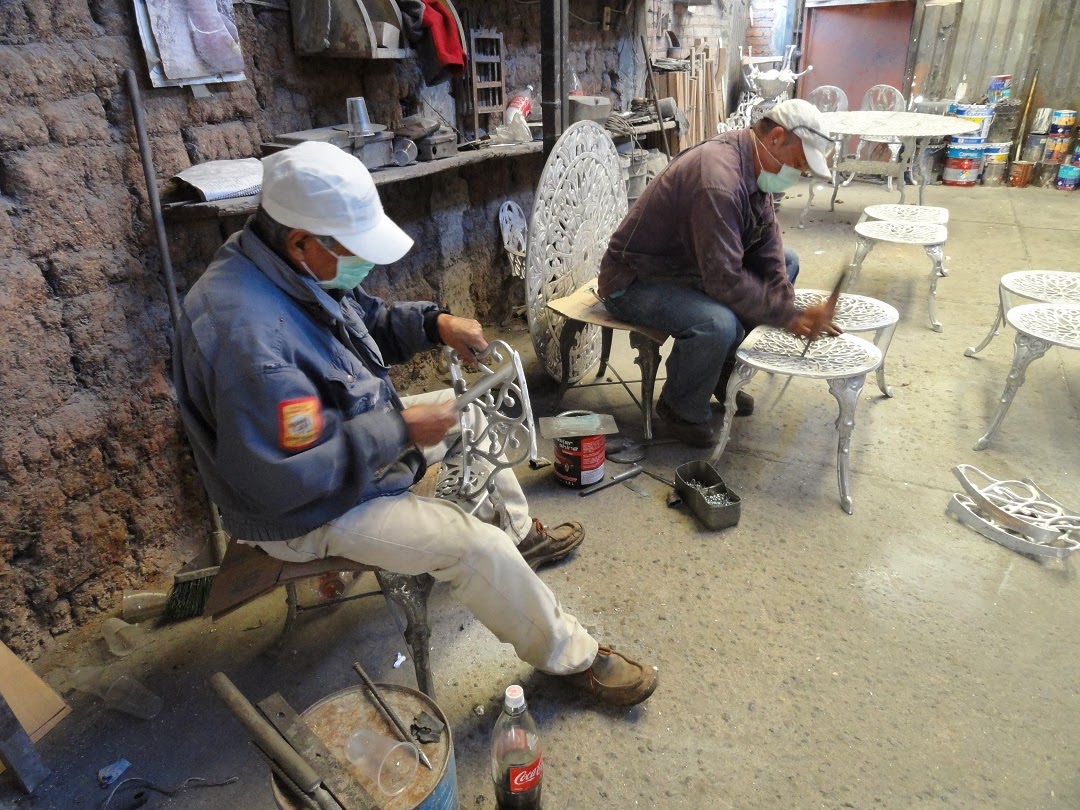 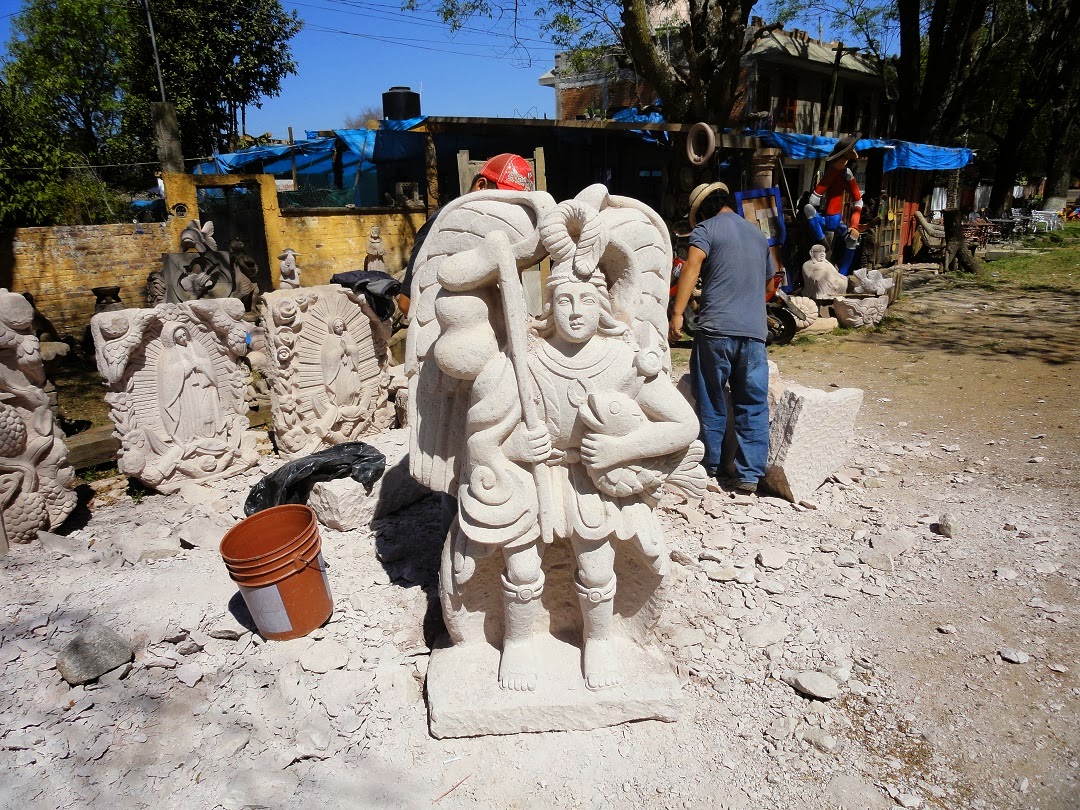 There are many places in Mexico where we have seen beautiful stone work. It can be mind boggling trying to figure out not only how they manage to carve so many huge pieces but also how they get all that stone moved. The owner of this place in Tzurumutaro explained that the stone came from a quarry, and he can remember his father bringing the pieces down from the mountain with his burro.
It's common to see the stone carvers working out alongside the road as we did here. 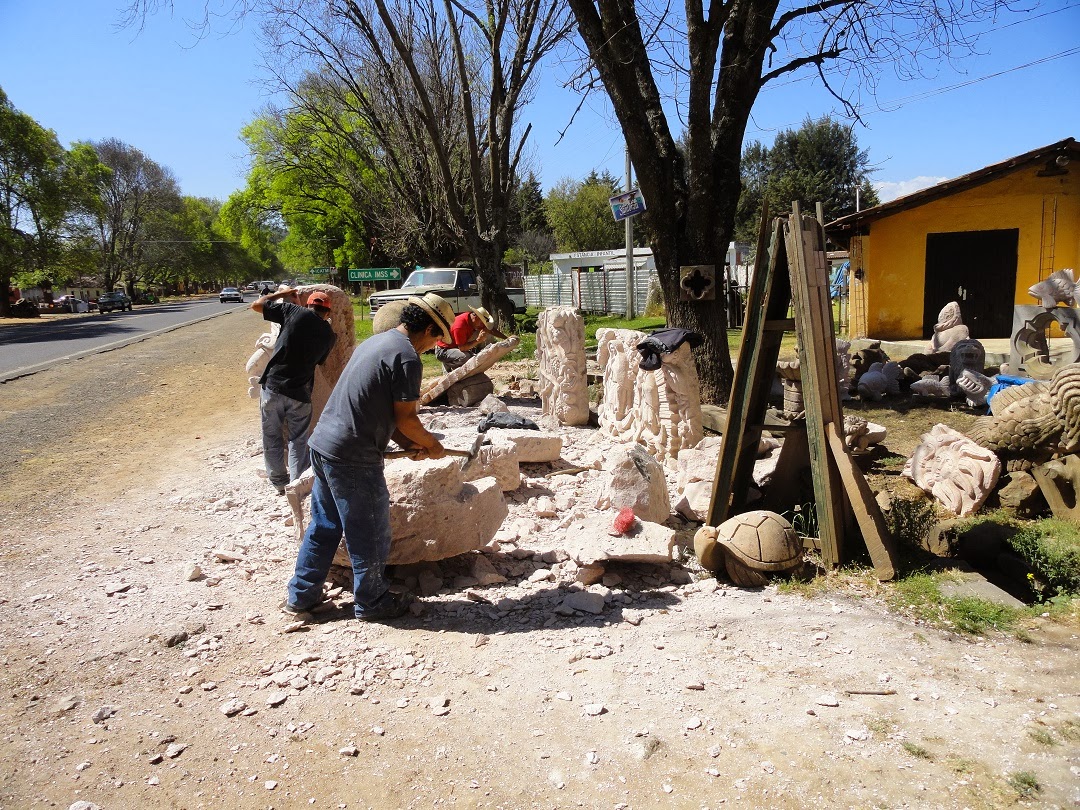 It was difficult to figure out what kind of stone they were using here, problems in translation. It appeared to be somewhat soft and they were careful not too chip off too much at one time. 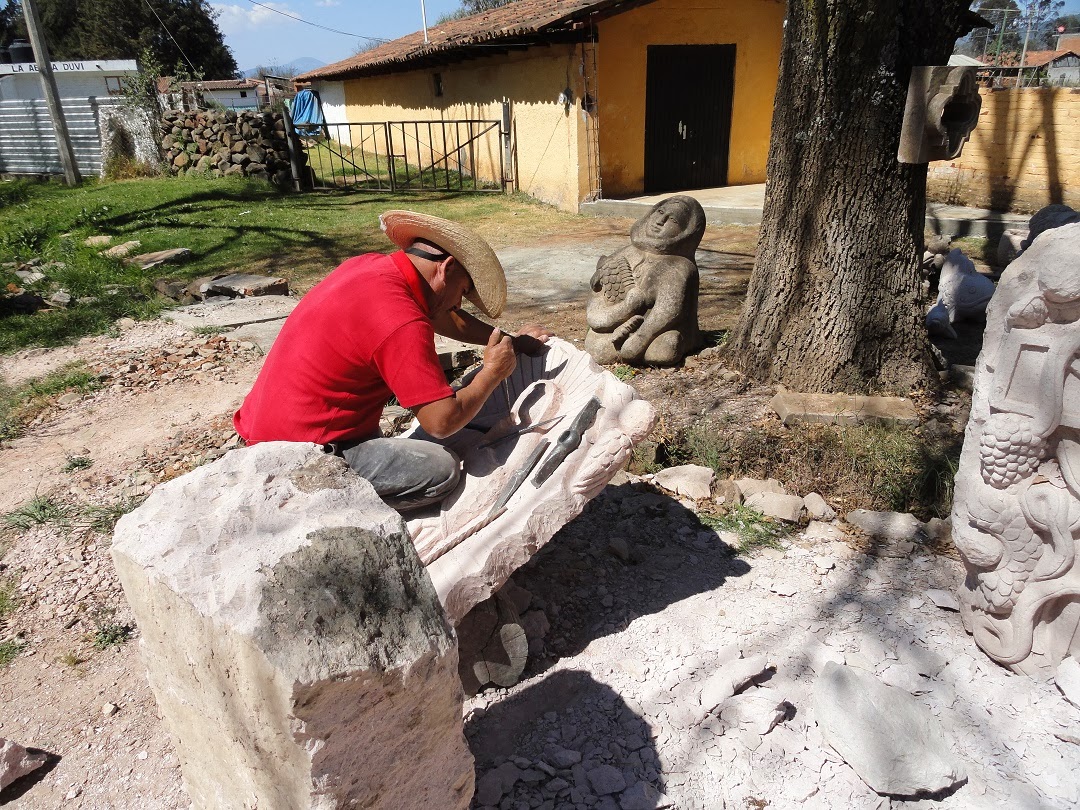 This place had a fairly limited number of pieces compared to other places we've been, but they still had a variety of animals, copies of artifacts and historic figures, and of course many religious items. 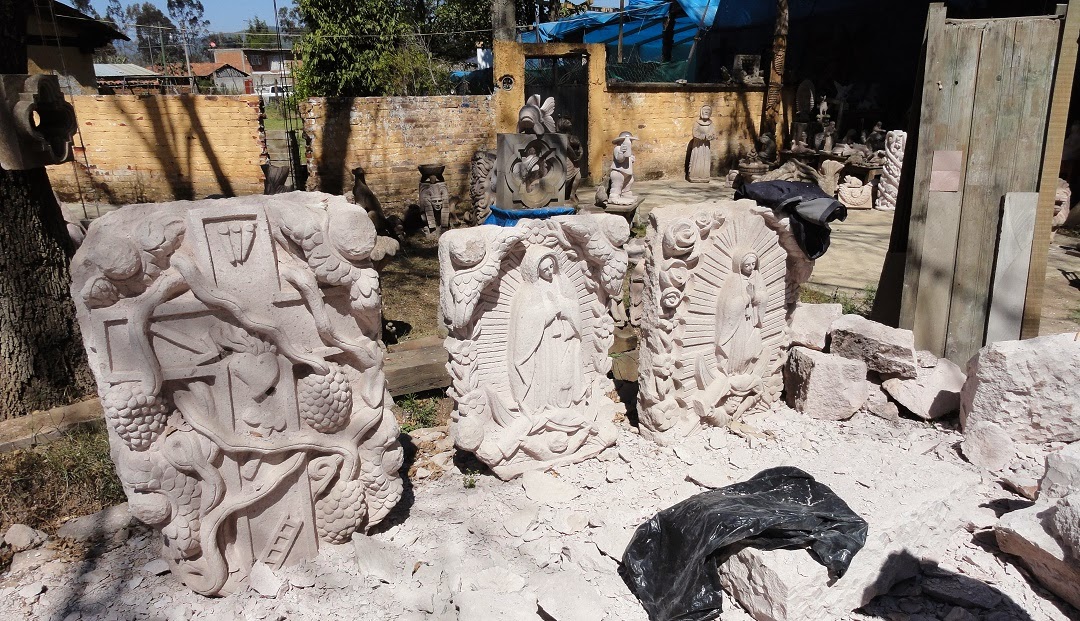 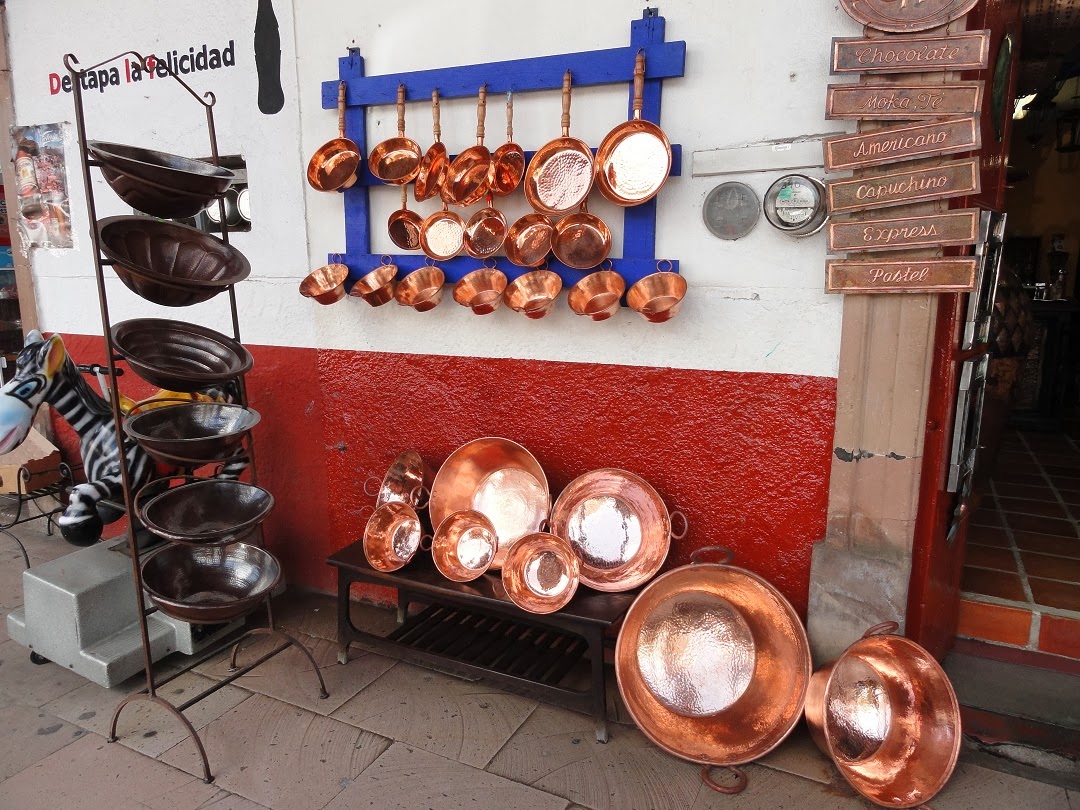 No trip to Patzcuaro is complete without a trip to Santa Clara del Cobre, the copper town. This inventive craft center specializes in the manufacture of beaten copper in all its forms. There are a multitude of shops and their offerings are overwhelming.
We had a lovely visit with Elisa, the owner of Arte y Cobre, located on a sidestreet off the plaza. She told us that business has really dropped off in Santa Clara de Cobre, as well as many other areas, since so many of the tourists have been scared off by the media. It's a shame since we've always felt safe and have so enjoyed exploring this area. I guess this is a topic for another time, but we have definite issues with the media and their treatment of Mexico. 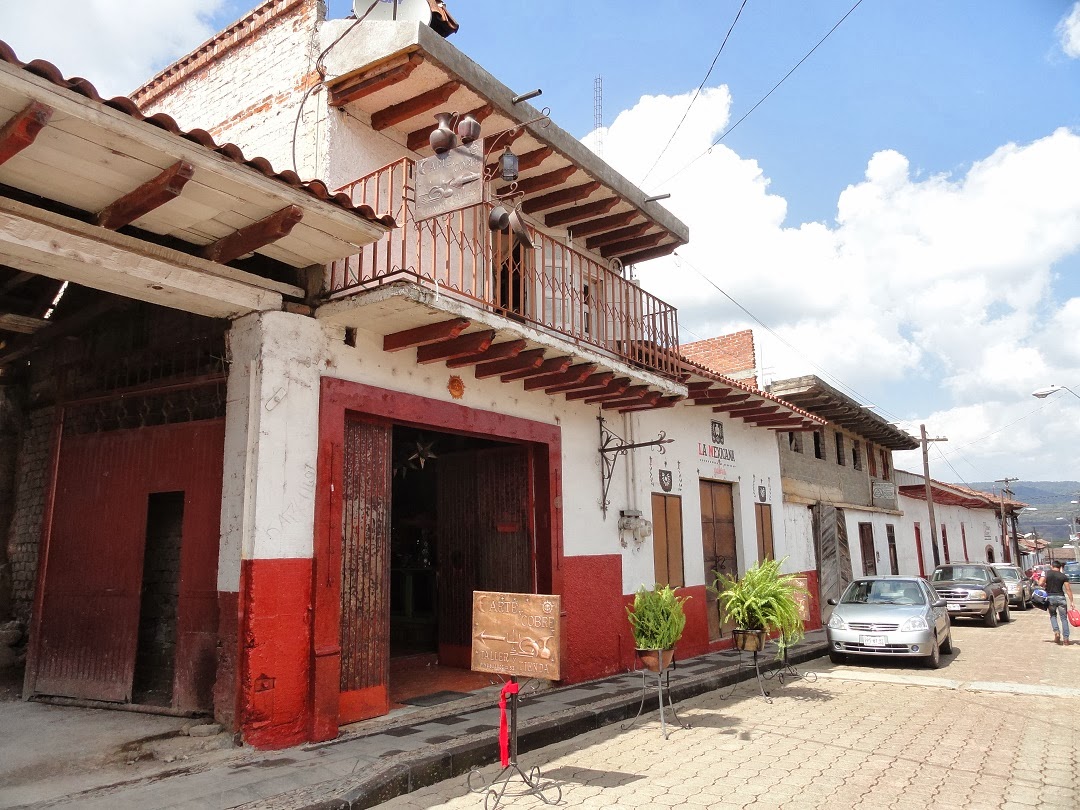 Elisa had a large selection of wares as did the other shops we visited. It's not all just pots and pans, but lovely vases, urns, sinks, bathtubs, and even jewelry. 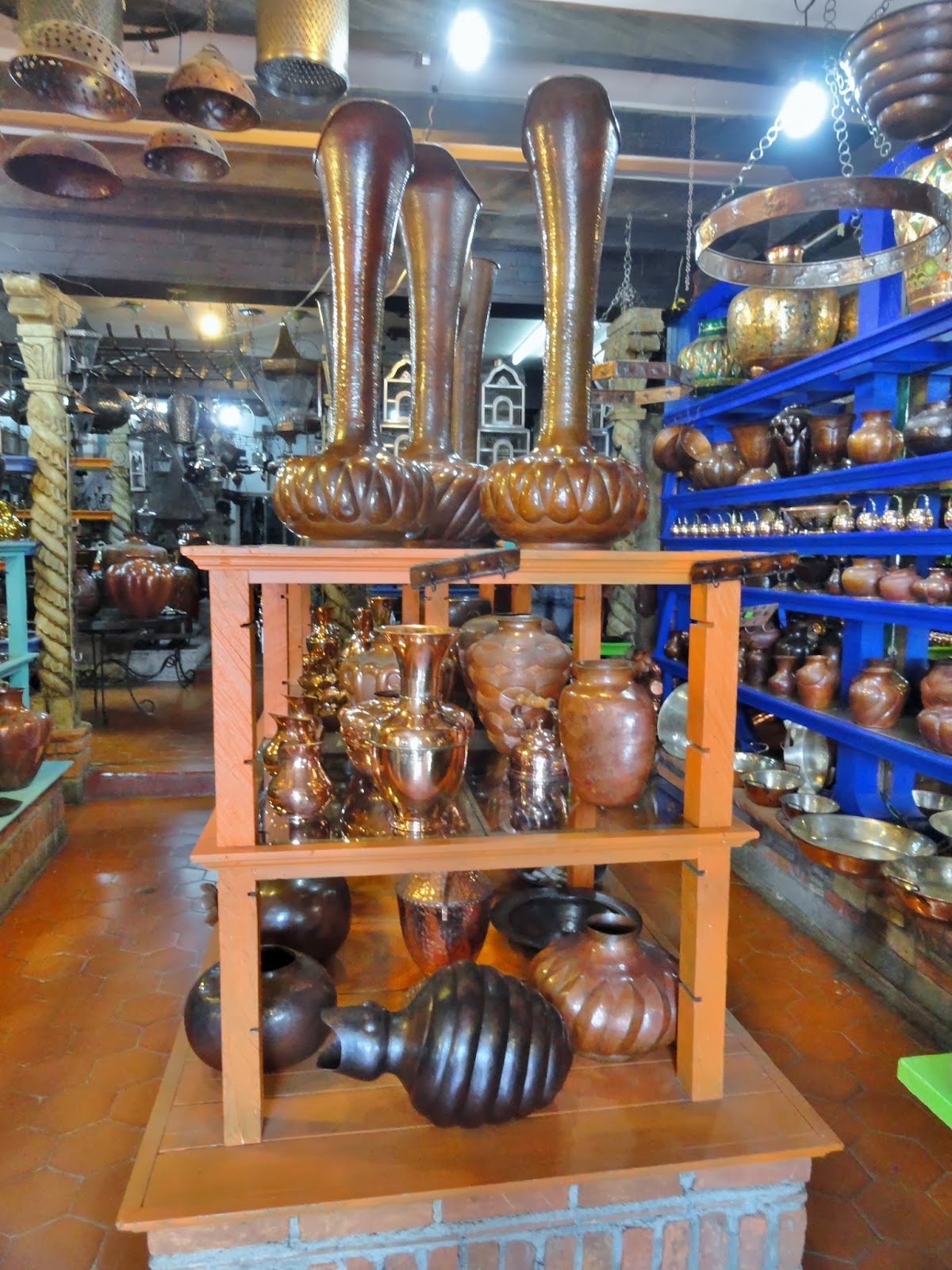 Elisa told us that she has opened two shops in San Miguel de Allende and invited us to stop by when she would be there. Since we're now in San Miguel we took her up on her offer and enjoyed seeing Elisa again while scoping out her new shops. Very nice.

We went into another shop in Santa Clara del Cobre that had a workshop in the back where the artisans were busy and happy to show us around. 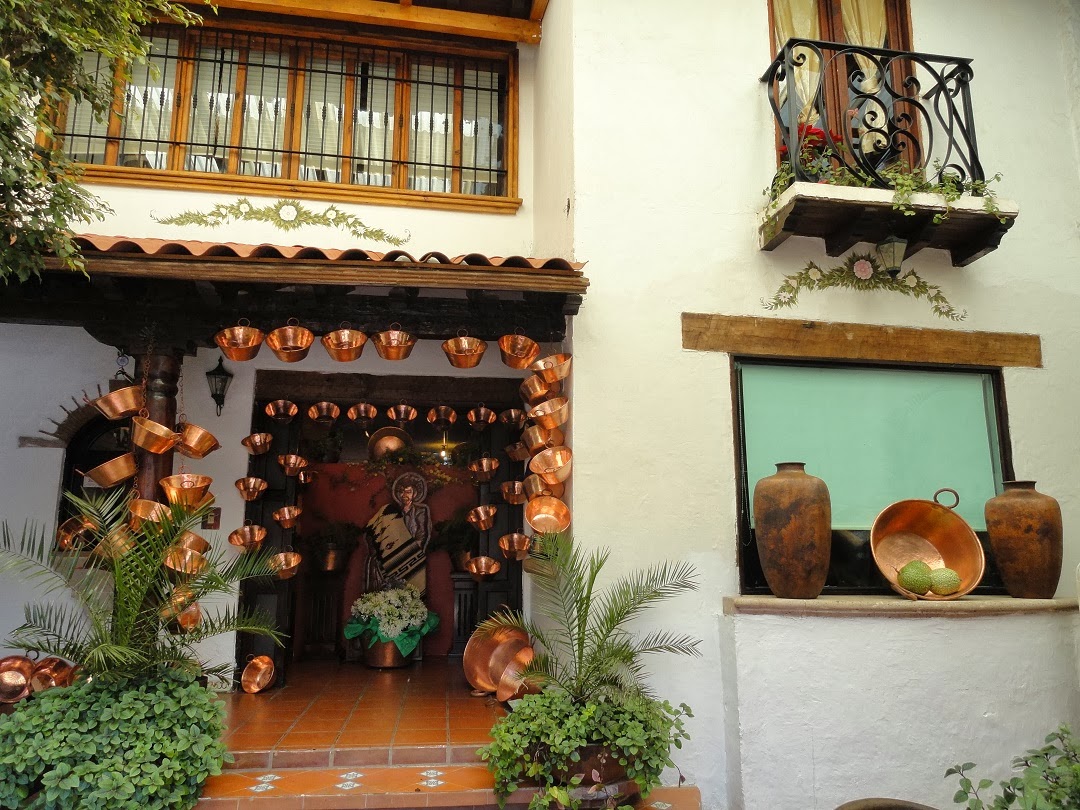 We've seen the demonstration before but it's always interesting. The copper pieces are placed in the fire to be shaped, then removed and dipped into water to cool them off. 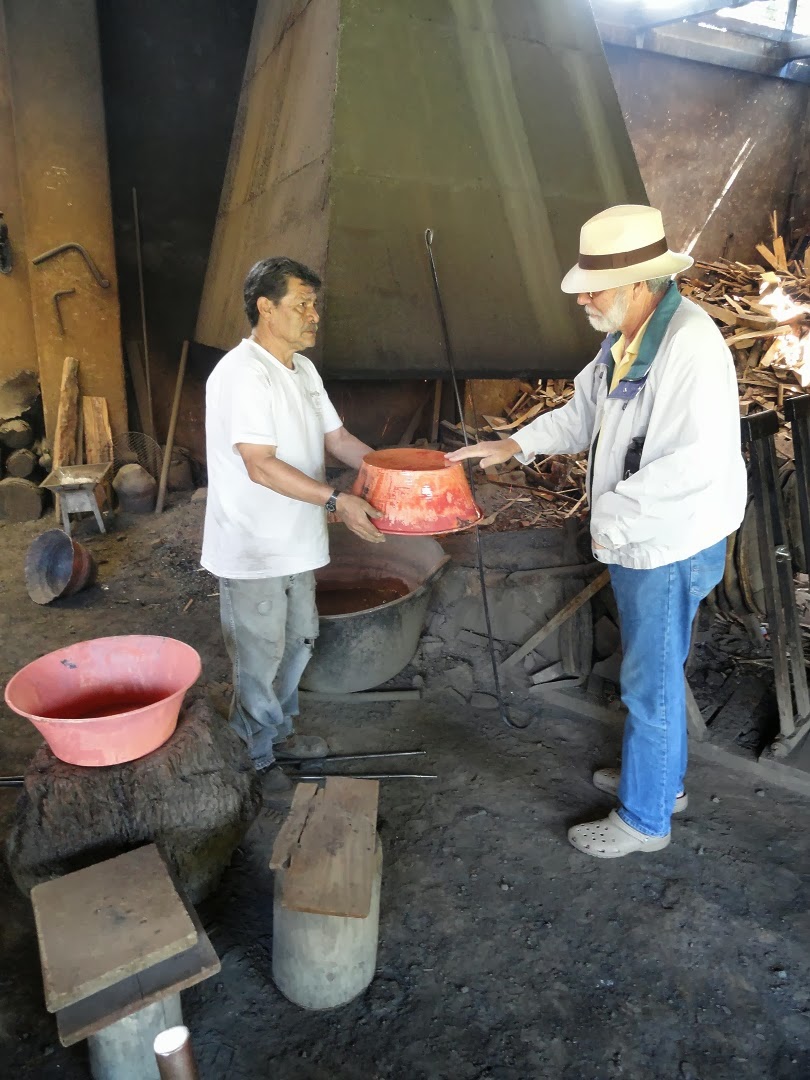 The picture above shows a cooled piece in its natural color after being removed from the fire and cooled.
It's then beaten and the sheen begins to come out. 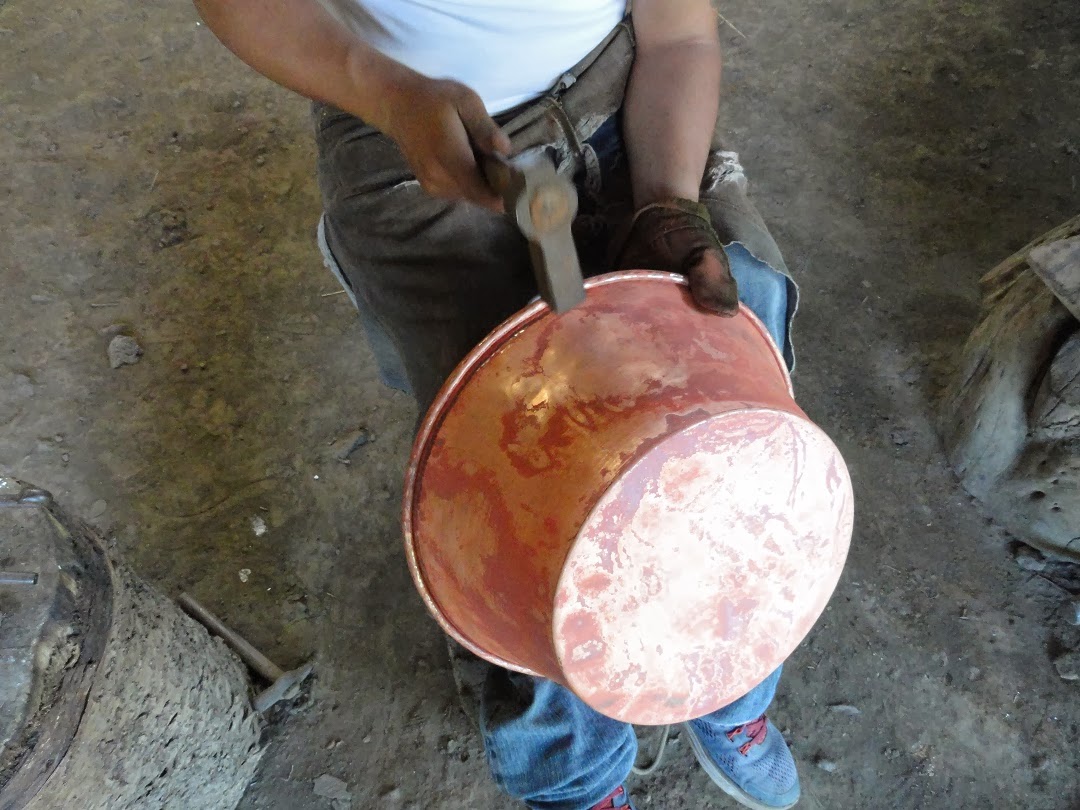 It's an interesting process, and we enjoyed the workshop visit. 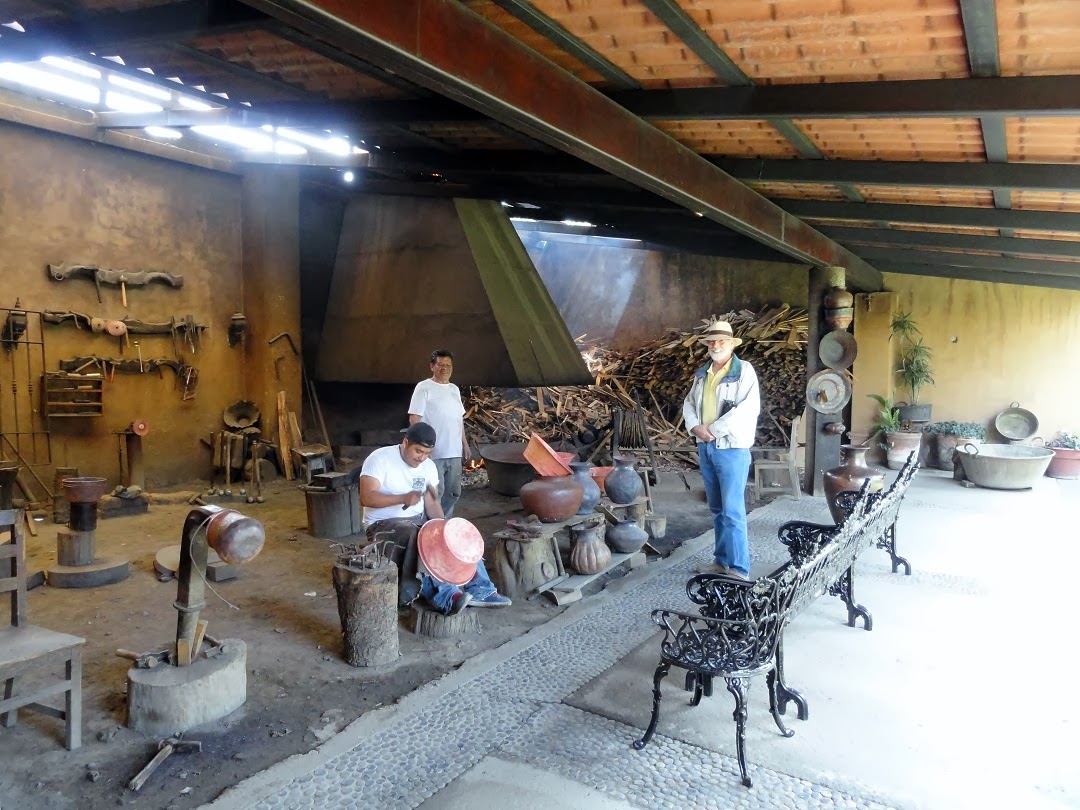 One of the artisans showed us an urn that he made (no machines or molds) which has serpent heads coming out of the side. It is all one piece. Amazing. 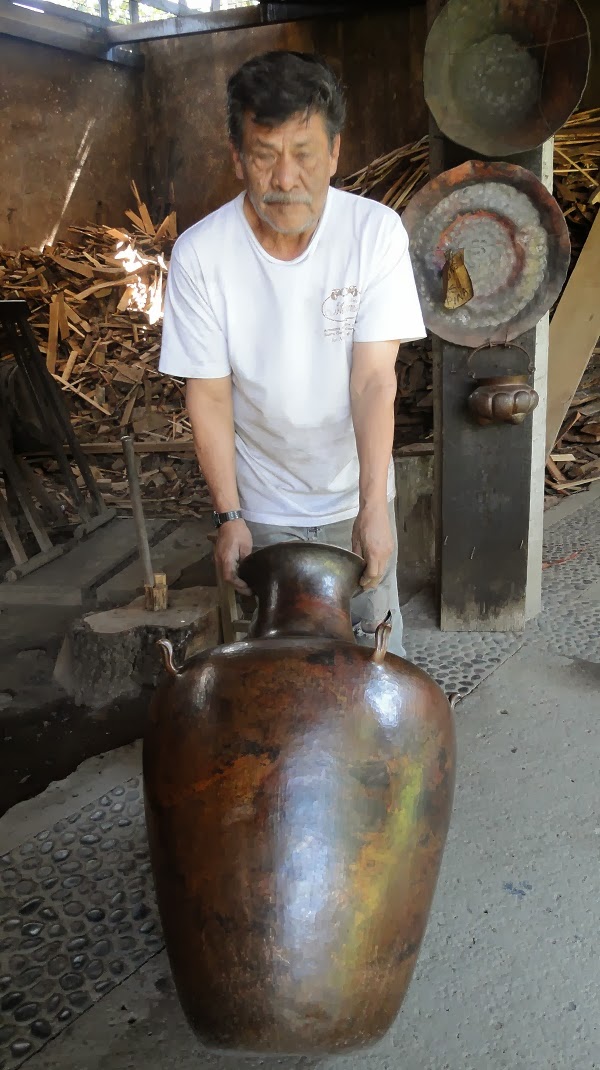 This is a pretty brief description of this visit, but more can be found on the copper making process and town on previous blogs found here
http://www.briansue2.blogspot.mx/2012_02_01_archive.html