We made our yearly stop in Lyons, Colorado, this year and were having a great time until the rains came. Meadow Park in Lyons has (had) 9 RV spaces and was about 30 yards from the St. Vrain River. We have always loved staying there. It's beautiful, generally very quiet, and we were able to take long daily walks along the river. 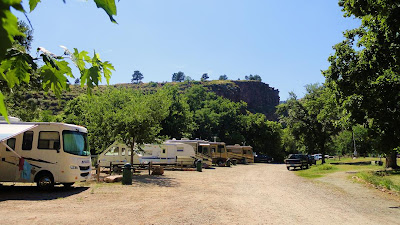 We had planned to leave on Thursday, Sept. 12 and fortunately had started picking things up in preparation for leaving. The rain was pretty continuous for a couple of days, and kept coming down. Wednesday afternoon Brian and I went to some of the usual places we go on our walk and were pretty amazed at the volume of water coming down the river. He took a picture of one of the bridges we usually walk over while I was standing on it. The river was much higher than we had ever seen it and we thought this picture showed how much water was flowing. At this point the water was probably still about 10 feet below the bridge. 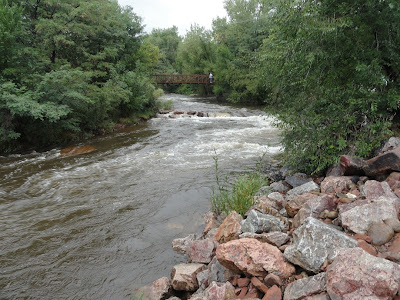 I went to bed about 10:30 but woke up around 12:30. I could hear the river roaring and what sounded like thunder but was probably the sound of boulders crashing into each other. It was still raining hard and things just didn't seem right. I went out to the living room and Brian told me that 3 motorhomes had just left and maybe we needed to leave as well. At this point a Boulder County sheriff showed up and told us we had to evacuate. We packed everything up in the rain and dark and moved the Bus and car to higher ground at the entrance to Meadow Park. As we were evacuating I was wading through water that definitely shouldn't have been there. With memories of the Big Thompson Flood in 1976 and the devastation it caused, Brian said he thought we should keep moving and go into Longmont. Great idea. I drove the car and followed Brian and Tilly who were in the Bus. When we drove out of Lyons, water was running over the road pretty close to where we took the picture above. Very scary for me as I had visions of the car being swept away, but when I saw Brian take the Bus through I figured I could make it, and I did. We made it to the Longmont Walmart which we knew was on high ground around 3:00 AM and finally felt safe.
The next day we saw the following picture of the bridge I had been standing on. So hard to believe it. 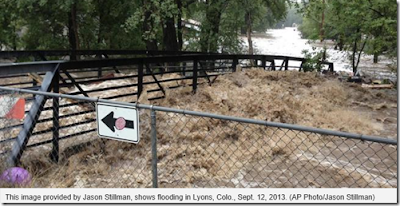 We have been in touch with the camp hosts at Meadow Park who made it out as well, and they confirmed what we already knew - the park is gone. As far as we know our fellow campers made it out ok and some even joined us at Camp Walmart.
Once we were at Walmart we had to settle in for a few days because the roads around us were closed. We had a window of opportunity on Saturday and made it to our next stop, Colorado City which is just south of Pueblo. Evidence of flooding could be seen along our drive. The whole experience was mind boggling to say the least.
The news has shown many pictures of the devastation in Lyons and the surrounding area, and it's hard to have much to add to that. We feel extremely fortunate to have gotten out when we did and made it safely to Longmont. Others have not been so fortunate. It will take months, if not years, to recover from this flood.
Posted by Sue and Brian at 6:55 AM