This was our third trip to Monument Valley since we began RVing seven years ago. The landscape is overwhelming in size and beauty. There are miles of buttes and mesas with occasional pinnacles of rock, and the colors change with the seasons and position of the sun. Much of the scenery is familiar since it's been a backdrop for so many movies and commercials. John Ford was the first to start making movies here and John Wayne starred in several of them. There's even a cabin labeled as John Wayne's behind the old Trading Post at Gouldings. The area known as Gouldings is like a little town in the middle of the Navajo Tribal Lands which has the Trading Post, museum, restaurant, RV park, gas station and several stores. It seems that Harry and Mike Goulding bought the land from the Navajos in the 1920's but we're unclear as to how it's still private land in the middle of tribal lands. 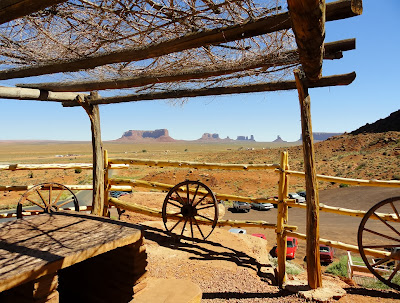 Above is the view from the Trading Post. Brian's Aunt Mary ran the hotel at the Trading Post in the mid 1950's, and her husband Martin Gambee was an artist who painted in Monument Valley. They were there at the same time as John Ford, and the family story is that when Martin had some medical problems Mr. Ford flew Martin to Flagstaff, AZ in his private plane. Another family story tells of how Martin may have been the first white man allowed to paint the Navajo people in the 1930's. When approached by a group of Navajo men Martin got into a conversation about how the Navajos had so little facial hair. They told him they pulled out all their facial hair with pliers and asked if he could handle that. Martin said yes, and after pulling a few hairs they decided he was a good guy. Several of Martin's paintings are hanging in the museum at the Trading Post.
The RV park has a nice view of the valley and I took the picture below on the day we arrived. 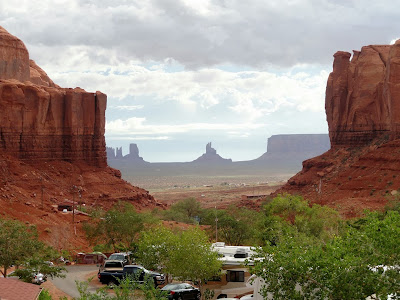 The second day was incredibly windy and there were dust storm all day. Same view on that day below. 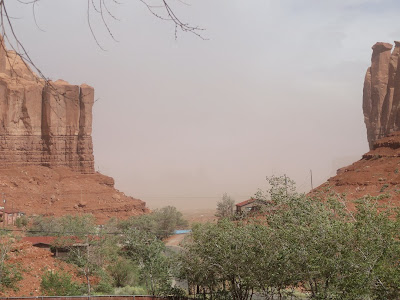 Pretty crazy, so we put off our sightseeing until the next day which was sunny and clear. Following are some photos from our drive. 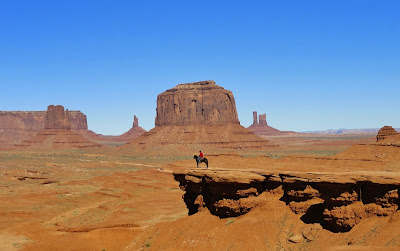 This was taken of John Ford Point which has been featured in many movies, The Lone Ranger being the most recent we know. 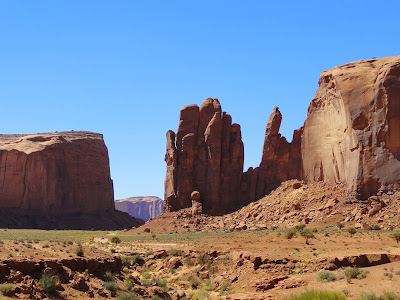 It's difficult to show the scope of the landscape but the little blue car on the road will hopefully give an idea its immensity. 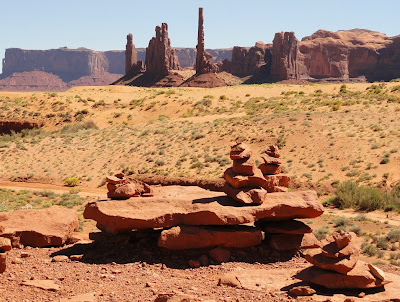 Brian took this shot of some man-made rock sculptures in front of the real thing. 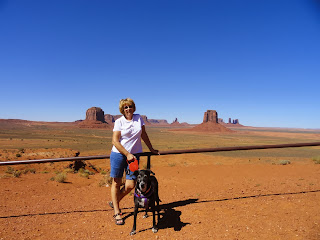 And of course Tilly and Sue enjoying the day.

There is so much information about this area which is part of what is known as the Grand Circle. Most of the people we see are from foreign countries and it seems like such a shame that we don't see more of our fellow US citizens exploring this amazing area.  Here is one of many links where more about the Grand Circle can be found . . .  http://grandcircle.org  . . .
Posted by Sue and Brian at 5:29 PM