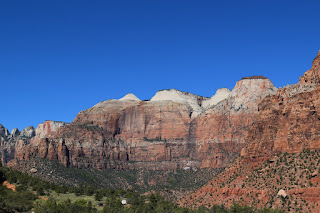 Zion is one of our favorites with its distinctive rock formations. Like a lot of the other national parks it's become crazy busy. To visit the main part of Zion you have to park and take shuttles, understandable with all the crowds. Unfortunately the waits to get on a shuttle were 30 minutes plus. We had been to the areas that require a shuttle several times and we wanted to avoid the long wait and big crowds so we spent most of our time on the east side of the park. This area doesn't require shuttles, and is not as busy. 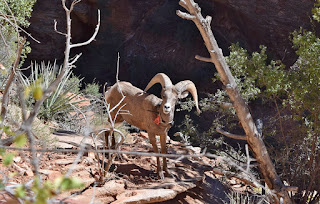 We saw an amazing number of desert bighorn sheep on this trip. We started with a beautiful hike up the Overlook Trail. When we first started out we saw a bighorn family and encountered more along the trail. They don't seem to be bothered the least little bit by humans. 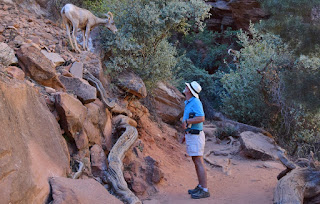 The trail ended at a stunning overlook, just as advertised. 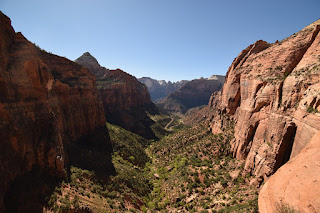 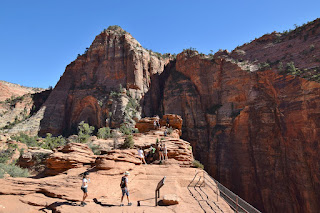 The trail was fairly easy, passing through some interesting areas. 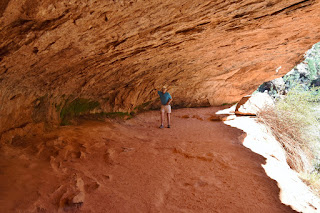 The other hikes we took were off the beaten track and we didn't see many people, but did see more bighorn sheep. This herd was up on the rocks above the canyon we were hiking in. It was fun to watch them jumping from rock to rock - very surefooted. One thing that was concerning is that we could see and hear them coughing. I looked on the internet and found out that there is some type of bacterial pneumonia infecting some of the sheep. While it can't be treated and no sheep have been known to have died, the website did ask anyone who witnessed excessively coughing sheep to report it, so I did. 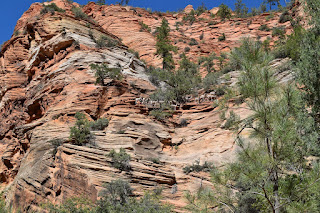 We saw another large herd near the road.

On another day we saw this ram and what appeared to be his mate. 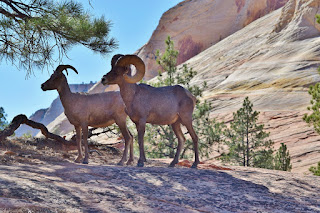 He was pushing her and trying to get her to move to another spot.  I guess he just gave up and walked away from her, then she took off on her own. 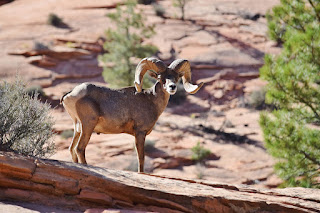 We did some other hiking outside of the park. We took a trail up to a small slot canyon called Red Hollow. It was a pretty easy hike to the entrance and through the first part of the canyon. 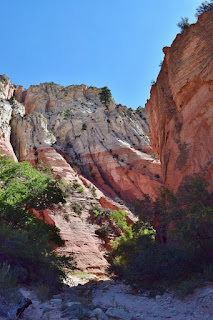 Once we got into the canyon there were several large boulders to climb over - fortunately someone had hauled in a pallet which provided some crude steps to help in getting over the first set of boulders. The second one pretty well stopped us. We're just not as young as we like to think we are. 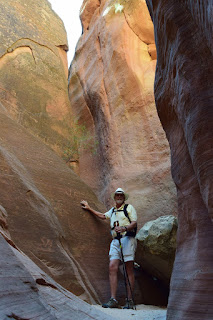 We've enjoyed doing more hiking this summer and Zion is a great place for it. It takes a bit of planning to get away from the crowds but it can be done.
Posted by Sue and Brian at 1:13 PM