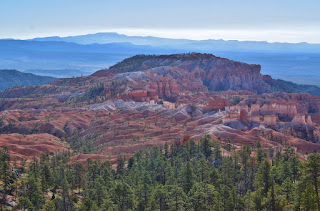 Bryce is right up there among our favorite national parks, so it's always worth another visit. It has the largest collection of hoodoos in the world. Hoodoos are tall, skinny rock towers that are formed by erosion. Photographs don't do them justice. The photo below is from an area called the amphitheater which has thousands of them. 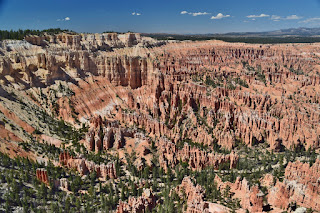 We spent some time driving along the main park road, stopping at the overlooks and doing some short hikes. Stunning views abound. 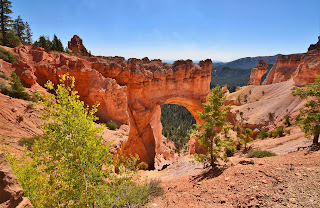 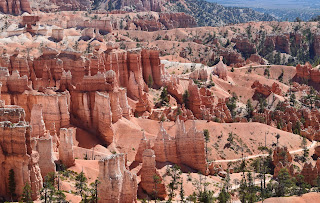 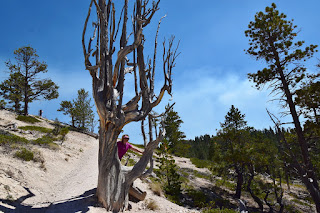 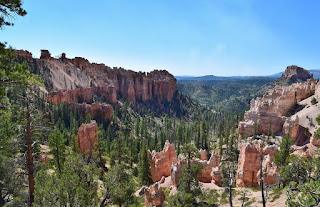 We spent one morning hiking the Queens Garden and Navajo Loop Trails which were rated as one of the top ten hikes in the U.S. by National Geographic a few years ago. The Queen's Garden Trail winds its way down from the rim to Queens Garden at the bottom. The photo below shows the beginning of the hike as people begin the descent. 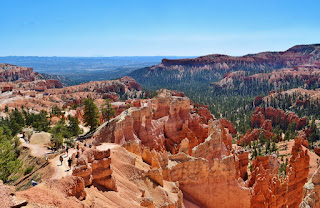 The trail winds through the hoodoos and has several arches to pass through. 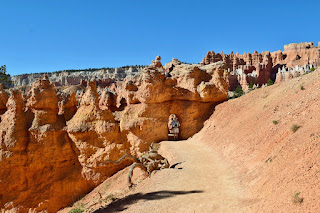 The Queens Garden Trail ends at a rock formation that is remarkably similar to a statue of Queen Victoria wearing her crown and long dress. The statue is somewhere in England, I'm not sure of the exact spot. 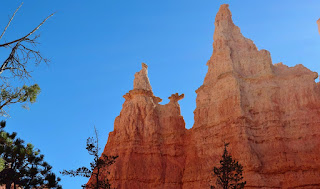 At this point the trail joins the Navajo Loop. We hiked along the canyon floor, enjoying the sights, and got ready to do our 550 foot ascent. Fortunately the ascent has switchbacks but it's still a long way to the top. 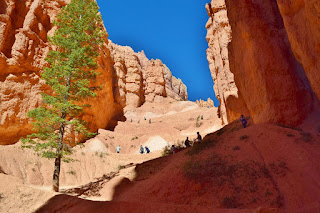 The view looking down from about halfway up the switchbacks. 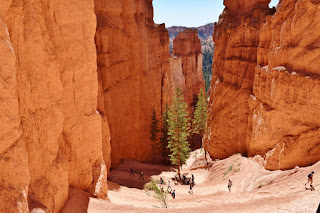 Almost to the top and still smiling. 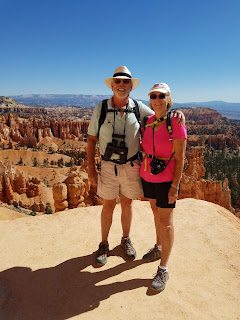 The drive through the park ends at a viewpoint called Rainbow Point. We took a hike from there called the Bristlecone Trail. When we started the hike we noticed a few firefighters and their vehicles, but the trail wasn't closed. When got to Rainbow Point we could look out and see smoke. 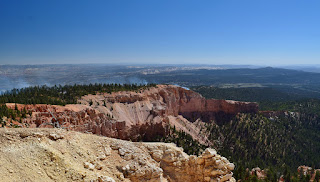 We had been aware of increasing smoke in the area and knew there was a fire (actually 2) in the park but the fires hadn't affected us. As we continued along the trail we talked to some firefighters who were clearing brush. They told us that the policy was not to suppress the fires unless they approached structures or a public area. We continued along the trail, seeing more firefighters coming down, and when we got back to the parking lot the number of vehicles and personnel had greatly increased. The winds were quite strong and it was evident that the fire was spreading. We stopped at one of the overlooks and watched as the fire exploded. 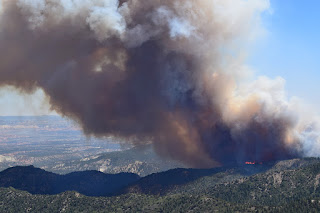 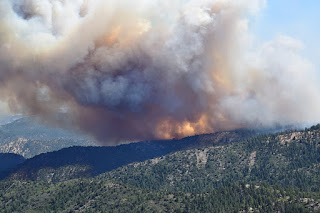 We were never close enough to be in any danger, but the smoke was pretty thick that afternoon, even back at our RV park. As we understand it, the firefighters were protecting Rainbow Point. The parking lot has restrooms and a few other structures. We were told that there was a sprinkler system up there that would be used to keep the fire away. The latest update as of 9/24 is that 'The Riggs and Lonely fires are currently active along the park's southeastern boundary. These fires are being monitored while they perform their natural role in a fire-dependent ecosystem.' Several trails are still closed, but as of this weekend the road to Rainbow Point is open during the day.

What's in a name

One of my favorite stories is about how Bryce Canyon got its name. Sometime in the late 1870’s or early 1880’s Ebenezer Bryce moved into the Paria Valley, just east of the present day national park. One day while searching for his cattle Ebenezer, a pioneer rancher, stumbled onto the main amphitheater of Bryce Canyon. You’d think that he would have something dramatic to say about what he saw on this occasion, but his only comment on record was “It’s one hell of a place to lose a cow.” People were more practical about life in the days of Ebenezer Bryce and scenery was likely far less important than scratching out a living in an arid and higher elevation climate. Soon the word must have spread about the canyon and locals began calling the place Bryce’s Canyon.
Posted by Sue and Brian at 3:38 PM