When we meet new people they often say 'Oh, you're living the dream'. Brian's standard response is 'Yes, but sometimes the dream's a nightmare'. While we're by no means in a nightmare scenario we have had a bit of a glitch. While camped near the North Rim of the Grand Canyon I noticed a drip under the back of the Bus. Brian crawled under, found out it was coolant, and said 'this is not good'. Turns out we had a serious radiator leak and couldn't drive the Bus. Fortunately our FMCA Roadside Assistance covered the tow, which wasn't cheap. 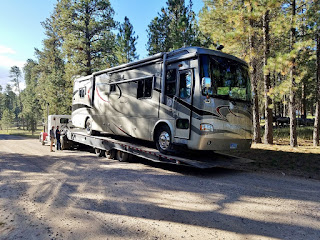 As long as we were already set up and had paid for a couple of days we decided to stay where we were and spend some time on the North Rim. More about that later.

When we were ready to leave a lowboy was sent up from Kanab, UT. The tow driver was experienced and Brian was also familiar with the process. The Bus was loaded up without a problem and delivered to Little's Diesel Repair in Kanab. At least the drive down to Kanab provided us with some great views - too bad the Bus was being towed backwards and couldn't enjoy them as well. Unfortunately we need a new radiator, not cheap or easy to get. It looks like we'll be here at least another week. The good news is that we're in a really gorgeous area of the country, have a 50 amp electric hookup, water, free wifi, TV, and access to a pump-out truck. 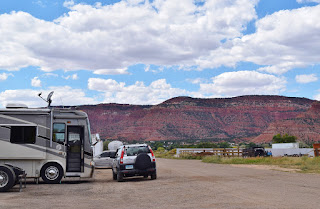 The town of Kanab is a base for people going to Zion, Bryce, the Grand Canyon North Rim, Page for the slot canyons, and so many other things in southern Utah. There are some great restaurants, stores with the necessities and so on. We have some ideas of things to do while here - things could be worse.

We've been so busy that I haven't blogged about our time at Bryce Canyon, Zion National Park, or the North Rim. Looks like I've got time now so will try to get some posts and pictures
published in the next few days.