The archaeological site Monte Alban overlooks the city of Oaxaca. It stands at nearly 6562 feet of altitude on top a a large hill that was leveled in order to build the large central plaza seen above. There were a lot of people visiting on the same day we were, but it's such a large area that it wasn't a problem.
The rectangular plaza is approximately 200 meters by 300 meters. Leveling the summit and then cutting away the rocky sides to make the plaza is a pretty astonishing engineering feat which was accomplished by the Zapotec Indians beginning in about 500 B.C., over 2500 years ago. The map below shows the position of the major buildings on the plaza. 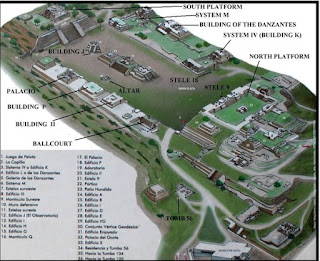 Monte Alban was the most important center in the region of Oaxaca for almost a thousand years. Because of its position it was easily defended and able to dominate the surrounding valleys that supported it. It was initially a civic and religious center but over time it grew into a city with patios, palaces, and tombs for the ruling classes. Estimates of the population of Monte Alban at its height range from 16,000 to 100, 000. Big difference in estimates and I have no idea which one is correct.

It was a beautiful day for doing a bit of hiking around and learning about the different areas of the complex. The ball court is one of the oldest in Mesoamerica. 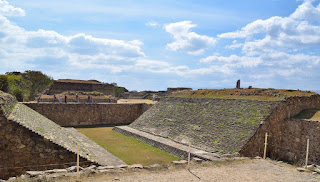 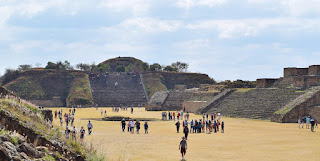 and even more impressive when standing at the bottom, wondering whether or not to give it a try. 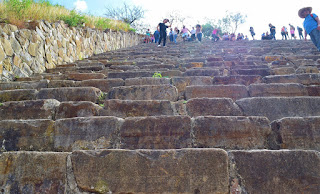 It was believed that this building was some type of observatory or to celebrate victory in battle. There are carvings on the walls that may be the names of conquered tribes.

This building appeared to have some type of altars or tables between the staircases. At the top there would have been a wooden temple. 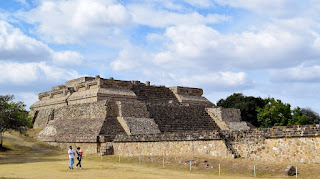 There was a Stela, or upright stone column, next to the building above. The plaque next to the Stela indicated that it was an astromomical instrument to verify both midday and the winter and summer soltices. 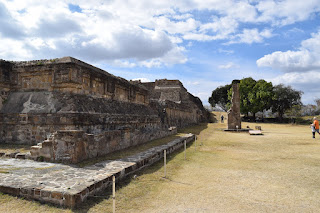 There were numerous stone slabs known as Danzantes. They show humans in strange, tortured positions who were first identified as dancers but are now thought to be prisoners of war. 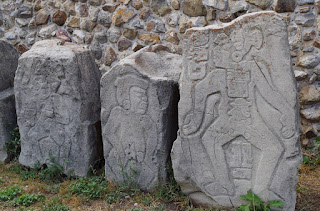 On our way to the North Platform Brian made a friend. 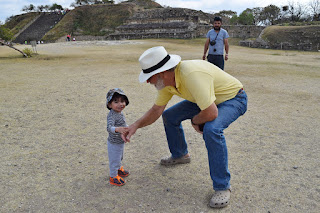 The North Platform is believed to be where the elite governing class lived. There are 2 rows of broken stone columns that would have supported a roof, and the sunken court was probably only accessible to the elite. The remains of an altar can be seen in the center of the court. 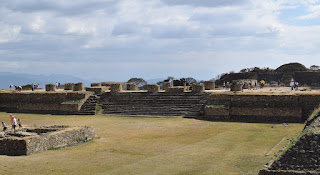 There were great views of the city and surrounding area from the top of both North and South Platforms of the ruins. The ruins can be seen from all parts of the valley and attracted visitors and explorers, but it wasn't until 1931 that large-scale scientific excavations were undertaken under the direction of Mexican archaeologist Alfonso Caso. 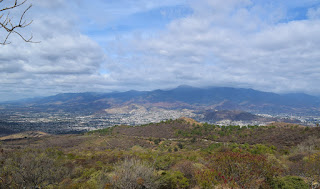 Many of the artifacts found at Monte Alban are in the Cultural Center next to the Church of Santo Domingo in Oaxaca and the Anthropology Museum in Mexico City.There is also a small museum at the Monte Alban site with artifacts - so fascinating to think about how long these have been around. 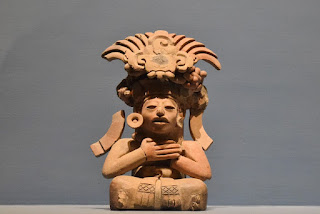 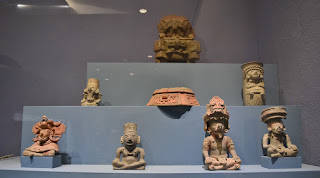 Wonder how they managed to move all these stelae (carved stone slabs). 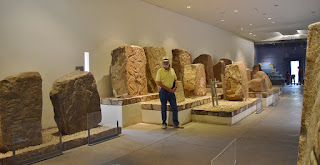 Some of them are huge and some are probably just a part of something much larger.