It's difficult to capture the intricacy of one of the outstanding crafts produced in Oaxaca called alebrijes. The painting is so delicate that it's often done with a brush having one single hair, or a small syringe and the carving is generally from one piece of wood. For example, the wings on the dragon in the photo below are not only individually painted but also individually carved, all from one piece of wood.
To get the most out of the photos, try clicking on them and then zooming in to see the detail work. The first alebrijes, along with use of the term, originated with Pedro Linares who lived in Mexico City. In the 1930s, Linares fell very ill and while he was in bed, unconscious, Linares dreamed of a strange place resembling a forest. There, he saw trees, animals, rocks, clouds that suddenly turned into something strange, some kind of animals, but, unknown animals. He saw a donkey with butterfly wings, a rooster with bull horns, a lion with an eagle head, and all of them were shouting one word, "Alebrijes". Upon recovery, he began recreating the creatures he saw in cardboard and paper-mache and called them alebrijes. 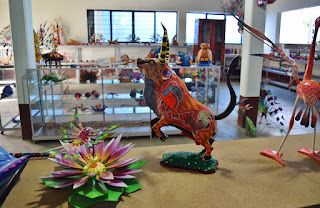 Today alebrijes are carved from wood rather than made from paper-mache. The Oaxaca valley area already had a history of carving animal and other types of figures from wood, and Linares’ designs were adapted to the carving of a local wood called copal. The carving of a piece, which is done while the wood is still wet, can last anywhere from hours to a month, depending on the size and fineness of the piece. Often the copal wood that is used will influence what is made, both because of the shapes the branches can take and because male and female trees differ in hardness and shape. Carving is done with non-mechanical hand tools such as machetes, chisels and knives. After the carving, the figure is then left to dry for up to ten months, depending on its overall size and thickness 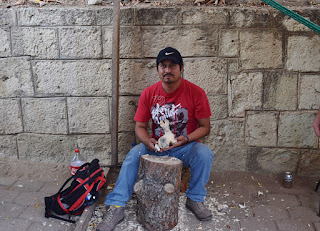 Then the painting begins.  Most of the artists we spoke to told us that the men would do the carving, while the women did the painting.The paint is acrylic and it was fascinating to watch the women paint. They usually had some sort of drawing on the wood that they followed while painting. 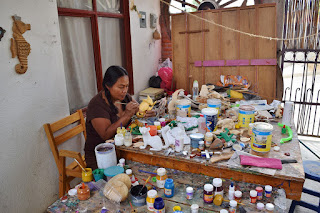 There are three towns that are primarily known for alebrijes - San Martín Tilcajete, San Antonio Arrazola, and La Unión Tejalapan.  We were able to visit the towns of Arrazola and Tilcajete. The styles of the alebrijes in the two towns were different in some ways but similar in others. Alebrijes can be found in galleries and shops throughout Mexico, and after visiting Arrazola and Tilcajete we've learned to identify which town produced the pieces we've seen.

The making of alebrijes in Oaxaca was initially established in Arrazola by Manuel Jimenez. In Arrazola, one of the community’s specialty is the carving of complex animal bodies, especially iguanas out of one single piece of wood. 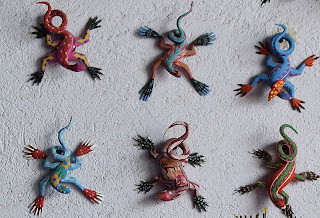 One of the best known artists in Arrazola is Miguel Santiago, who sells about forty pieces a year. Some of these sales are individual pieces and others are multiple sets such as Frida Kalo surrounded by monkeys. Sets are usually sold to foreign buyers for between $300 and $800 USD and have been sent to Europe, Japan and the United States. Sets often take more than a month to make and his work is considered to be in the high end of the market. Santiago’s orders extend more than two years in advance.
We visited several shops in Arrazola and saw a variety of beautiful pieces. The prices ranged according to quality and after a while we could tell why one piece was priced differently than a similar piece. 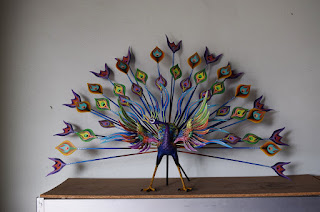 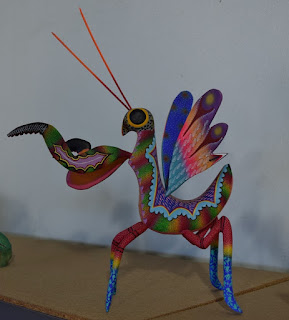 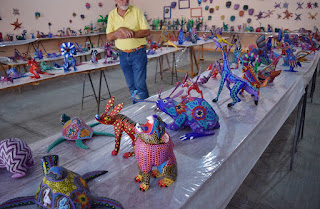 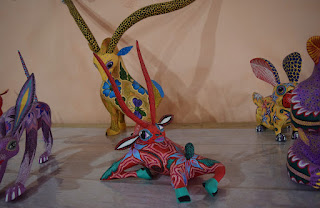 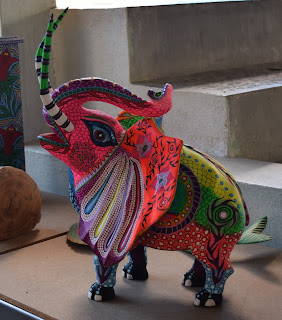 Of the three major carving towns, San Martin Tilcajete has experience the most success. Today, the carving of alebrijes is the economic base of Tilcajete. We were both captivated by the pieces we saw in Tilcajete and really liked the style of the Tilcajete alebrijes. The painting was more intricate with a variety of patterns and figures on the pieces. 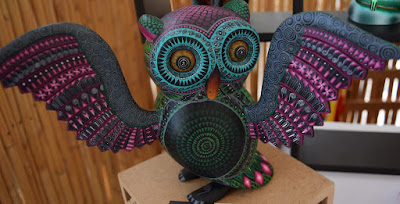 Every Friday on the main square is the “tianguis del alebrije” or weekly market selling wooden figures. The event allows visitors to purchase items from local craftsmen directly. The day we went to Tilcajete was the last day of a 2 week long art fair and we enjoyed seeing the various alibrejes on display in the booths. Our favorite artist was Lucy Mendez Sosa, whose work really stood out. Lucy does the painting and her husband Pablo does the carving. More about them can be found at    https://www.facebook.com/Pablo-y-Lucy-Mendez-Sosa-256316031056612/ 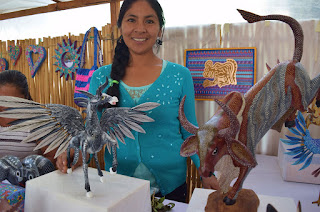 Not only did Lucy have the flying horses (Pegasus) that are very popular, but each feather was carved and painted separately. Really amazing. Her pieces were beyond our price range (for good reason) or we would have come home with one. We did, however, buy some smaller and less expensive pieces from some of the other artists. 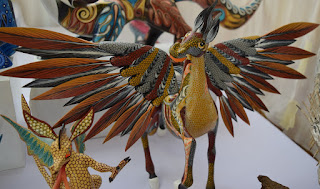 In addition to wandering around the booths at the art fair we walked around town and went into some of the workshops and stores. It was all pretty mind-blowing to see such unique and talented artists.
We bought a few smaller pieces from one of the well known artists husband and wife teams, Ivan and Mayte. More information about them can be found at
https://es-la.facebook.com/public/Alebrijes-Ivan-Fuentes-Y-Mayte   While we were in their shop, Mayte was working on this incredible piece. 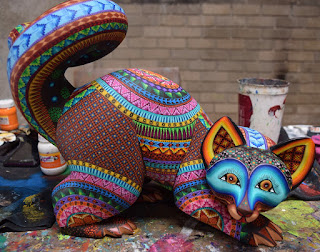 Following are pieces that represent just a fraction of what we saw. Zoom in to see the details. 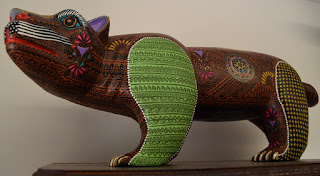 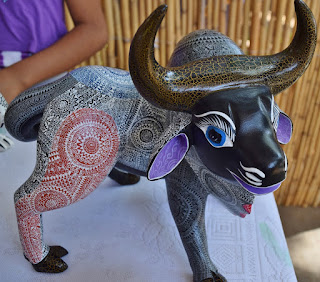 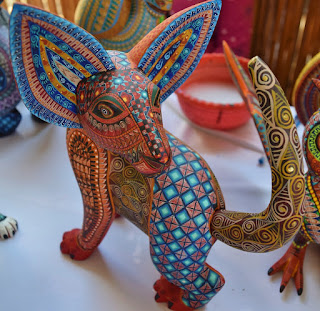 This piece with the three animals is carved from one piece of wood. 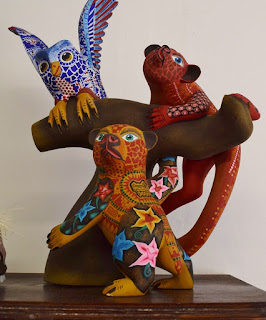 There's an indigenous painting on the hindquarters of this piece. 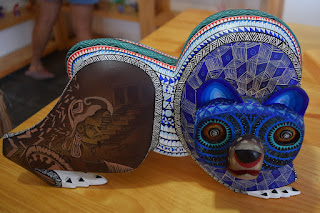 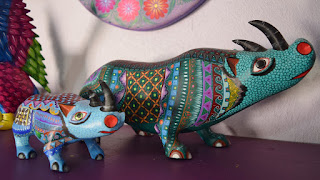 Note the turtles on the leg of the anteater. 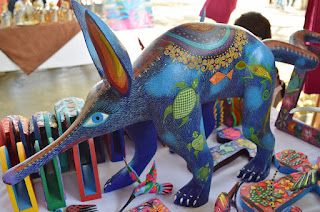 It was all just amazing and we're so glad we were able to visit these villages. It was very special to meet some of the artists who were so friendly and eager to share their work.

https://www.google.com.mx/search?q=Alebrije&tbm=isch&tbo=u&source=univ&sa=X&ved=0ahUKEwiQsrSF0uvJAhUDHx4KHc7GCWoQsAQIMQ&biw=1366&bih=643
Posted by Sue and Brian at 5:21 PM