After leaving Oaxaca we stopped in Cholula again for a couple of days. This time the 135 mile drive between Oaxaca and Cholula was only 6 hours instead of the 7.5 hours it took us to get there. Crazy.
There are 2 churches near Cholula that we wanted to see - Santa Maria Tonantzintla and San Francisco Acatepec. Since they were both within a few miles of our campground we decided to check them out.

This colorful entrance to the church looks as though it was specially built for the holidays. 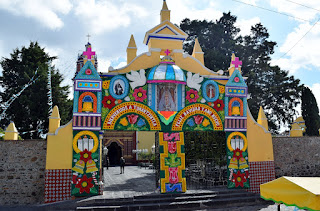 The church itself and the tower are faced with tile, characteristic of this area. 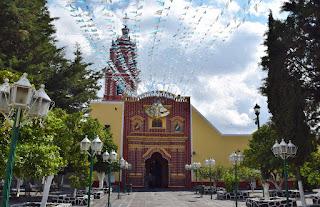 The interior of the church is incredibly ornate and bursting with color. There wasn't an empty space on the walls, ceilings, or anywhere else. Construction was begun in the 16th century and took Indian craftsmen 200 years to complete. Before the Spanish conquered the Indians, Tonantzin was mother of the gods and protectress of corn. When this church was built the Spanish allowed the Indians to model the stuccowork in accordance with their own traditions to avoid offending their ancestral beliefs.
There were no photographs allowed in the church, so I took some images from the internet. It was pretty overwhelming to be in the midst of the colorful saints, angels, fruits, flowers, birds,cherubs and faces covering every inch.
More images can be found at  Tonantzintla Images 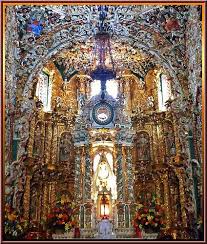 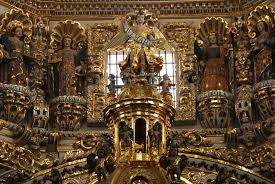 The church of San Francisco Acatepec is about one mile from Tonantzintla. It's known for a facade that is entirely covered in colorful handmade Talavera tiles. 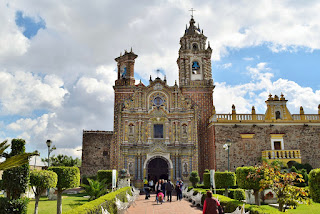 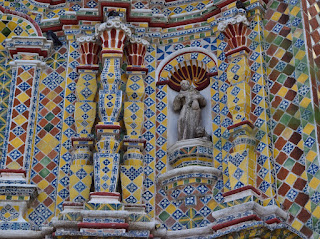 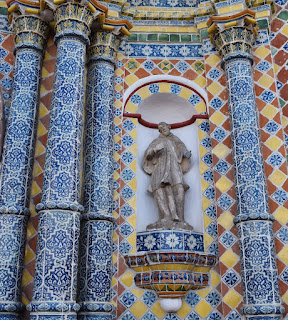 The spiral columns on the bell tower are made completely with tiles. 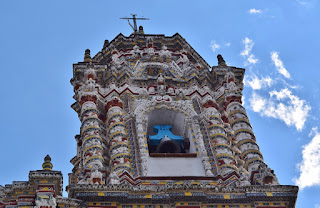 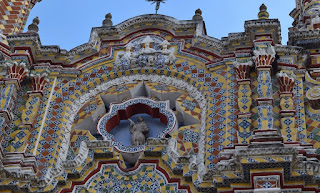 On December 31, 1939, a fire destroyed Acatepec's original interior which featured carved cedar altars and gold-covered stucco details. Fortunately, some 15 years before the disaster an engineer named Alberto Pani made a series of books called Churches of Mexico, which depicted 17th- and 18th-century churches. To present them in the best way possible, he worked with one of the nation’s top photographers, Guillermo Kahlo , Freda Kahlo's father. Based on these pictures the interior of San Francisco Acatepec was largely reconstructed in 1941. Although it's said to be nowhere as complete as the original, it’s still stunning. 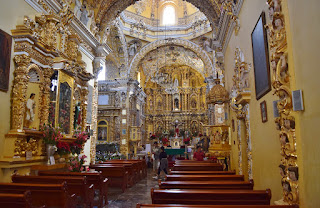 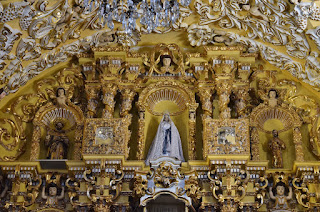 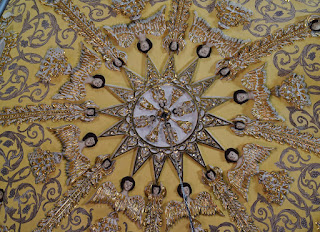