It seemed a shame to be so close to Rocky Mountain National Park and not get up there for a brief visit. We have been amazed at how much snow is still on mountain peaks for this time of year. Friends have told us that most of it has fallen in the last few months. 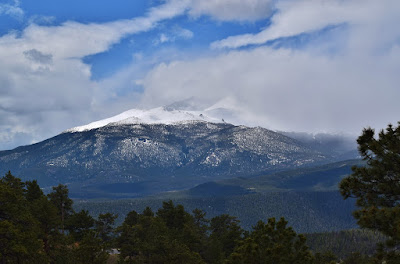 Our first sight on entering the park was a huge field full of bull elk. More than we have ever seen in one place. Brian started counting and stopped at 35, but estimates there were more than 50. This seemed pretty unusual to us, but a ranger we talked to said that it was pretty common for this time of year. He also said that these were all younger bulls and he called this area the bachelor pad since none of them have their own herd of cows. It isn't until the fall mating season that the bulls get territorial.

The whole concept of growing and shedding antlers has always interested us. Brian's research explains a lot about it. From good old Wikipedia -
'Antlers are extensions of the skull grown by members of the deer family. They are true bone structures that usually grow in symmetrical pairs. In most species, only the male grows antlers and their primary function is to increase his likelihood of sexual selection by attracting females or helping him fight other males. In many temperate zone species, antlers are shed and regrown each year.
Antlers are unique to cervids and found mostly on males: only reindeer have antlers on the females, and these are normally smaller than those of the males. Nevertheless, fertile does from other species of deer have the capacity to produce antlers on occasion, usually due to increased testosterone levels

Each antler grows from an attachment point on the skull called a pedicle. While an antler is growing, it is covered with highly vascular skin called velvet, which supplies oxygen and nutrients to the growing bone. Antlers are considered one of the most exaggerated cases of male secondary sexual traits in the animal kingdom, and grow faster than any other mammal bone. Growth occurs at the tip, and is initially cartilage, which is later replaced by bone tissue. Once the antler has achieved its full size, the velvet is lost and the antler's bone dies. This dead bone structure is the mature antler. In most cases, the bone at the base is destroyed by osteoclasts and the antlers fall off at some point. As a result of their fast growth rate, antlers are considered a handicap since there is an immense nutritional demand on deer to re-grow antlers annually, and thus can be honest signals of metabolic efficiency and food gathering capability.' 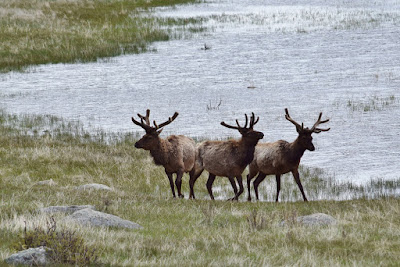 Since the antlers on these younger elk are new growth, they still have a ways to go. The older and larger the bull, the larger the antlers.
This little guy has a ways to go - he reminded me of Tilly as he was trying to reach around and scratch his ear. 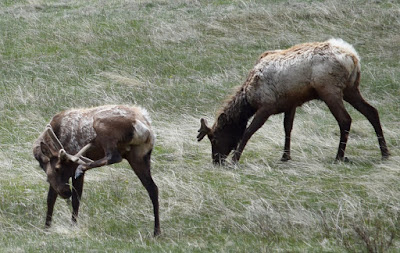 The elk were sharing the meadow with what I think are female and/or juvenile Rocky Mountain sheep.

The weather wasn't very cooperative during our time in Colorado. Too much rain and cold, but we're glad we took the time to get up to the park anyway.

Map of route from Lyons to Rocky Mountain National Park. 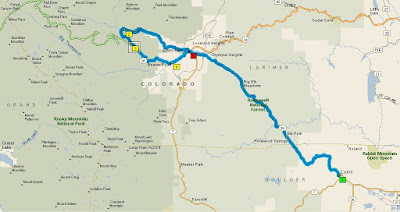