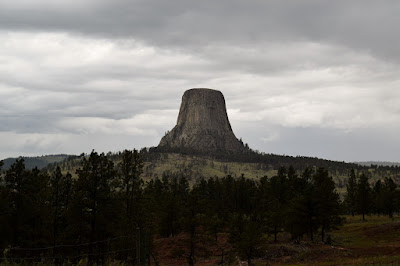 Devils Tower is one of those places we kept meaning to see, but it's kind of out of the way so we never did.  We decided that this year we would take a little detour and check it out. It's pretty impressive. The Tower rises 1,267 feet above the surrounding terrain and the summit is 5,114 feet above sea level. It  was the first declared United States National Monument, established on September 24, 1906, by President Theodore Roosevelt.

Devils Tower was featured in the movie 'Close Encounters of the Third Kind.' We both remember the scene where Richard Dreyfus was making a tower out of a big pile of mashed potatoes, running his fork up and down the pile. Once we got close to the Tower we could see what he was trying to do. The photo below shows  how the rock runs in vertical strips. The parallel strips are so precise and even that they look like they've been chiseled into the rock. 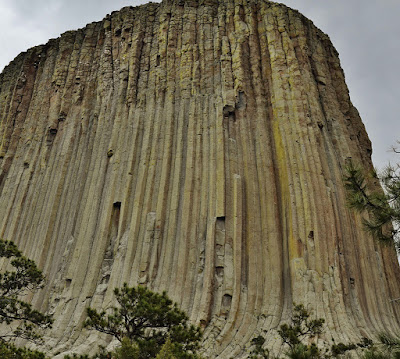 Although the Tower is a popular climbing destination it is not without controversy. The Tower is sacred to several Plains tribes, including the Lakota, Cheyenne and Kiowa. Because of this, many Indian leaders objected to climbers ascending the monument, considering this to be a desecration. The climbers argue that they had a right to climb the Tower, since it is on federal land. A compromise was eventually reached with a voluntary climbing ban during the month of June when the tribes are conducting ceremonies around the monument. Climbers are asked, but not required, to stay off the Tower in June. Approximately 85% of climbers honor the ban and voluntarily choose not to climb the Tower during the month of June. However several climbers, along with the Mountain States Legal Foundation, sued the Park Service claiming an inappropriate government entanglement with religion. The climbers lost the lawsuit.
More information regarding the Tower and climbing can be found at the following link   http://www.nps.gov/deto/faqs.htm 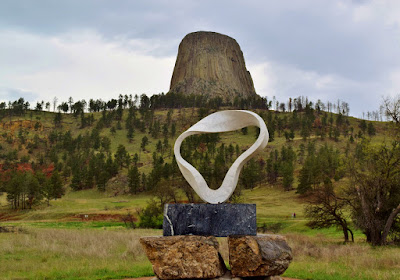 The sculpture in the photo above is at the new Tribal Connections site, part of Devils Tower National Monument.  It interprets Devils Tower as a place that is sacred to many Native American tribes. The central feature, the Wind Circle sculpture – also called the Sacred Circle of Smoke -- was created by internationally renowned Japanese artist Junkyu Muto as the third in a series of seven “peace sculptures” planned for significant sites around the world. The Wind Circle sculpture, which is made of white marble with a black base, stands an impressive 12 feet tall. The artist designed it to evoke the image of a puff of smoke from a sacred pipe. 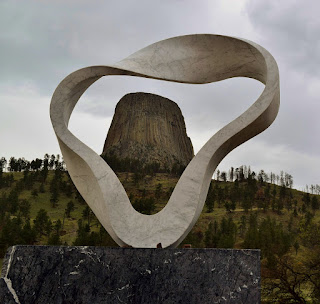 We had planned to hike around the base of the monument, but the weather wasn't cooperating. We spent some time in the Visitor Center learning more about the Tower. 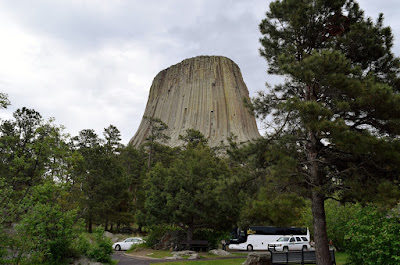 One of the things that I thought was interesting is that there is no definitive answer as to how the Tower was formed. There are three basic theories, kind of technical but interesting. The following link explains the geological theories     http://www.nps.gov/deto/learn/nature/geologicformations.htm

Native American stories telling how the Tower was formed are even more interesting. The stories all involve a bear trying to climb the Tower and are similar to this one from the Kiowa and Lakota tribes, 'Some girls went out to play and were spotted by several giant bears, who began to chase them. In an effort to escape the bears, the girls climbed atop a rock, fell to their knees, and prayed to the Great Spirit to save them. Hearing their prayers, the Great Spirit made the rock rise from the ground towards the heavens so that the bears could not reach the girls. The bears, in an effort to climb the rock, left deep claw marks in the sides, which had become too steep to climb. Those are the marks which appear today on the sides of Devils Tower. When the girls reached the sky, they were turned into the star constellation the Pleiades'.

It was a pretty interesting place to visit - just wish we had been able to do some hiking. Maybe next time.

Following are maps of our route from Lyons to Sundance, Wyoming, where we stayed while exploring the Tower, and our route from there to Sioux Falls, SD.

Lyons to Lusk, Wyoming where we made our first overnight stop -  222 miles 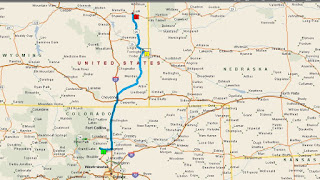 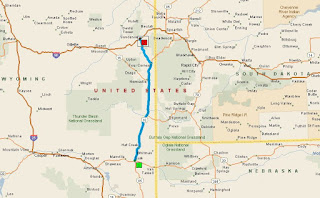 Sundance to Presho, SD - 245 miles. Don't recommend stopping in Presho, but driving in the wind and rain got to be too much.

Presho to Sioux Falls, SD, our hometown. We have to return here every five years to renew our drivers licenses - 175 miles.