After being up in the highlands since the holidays we decided we would spend some time on the coast. The nearest beach town from Jocotepec with RV parks is Melaque. The town has two parts, San Patricio Melaque (after St. Patrick as once many Irish settled here and St. Patricks day is still a big celebration) and Obregon, but it all runs together as one town commonly referred to as Melaque. This stretch of coast is referred to as Costalegre, the happy or bright coast.

Melaque is 200 miles from Jocotepec. Its about 35 miles north of the busy port city of Manzanillo and 140 miles south of Puerta Vallarta. 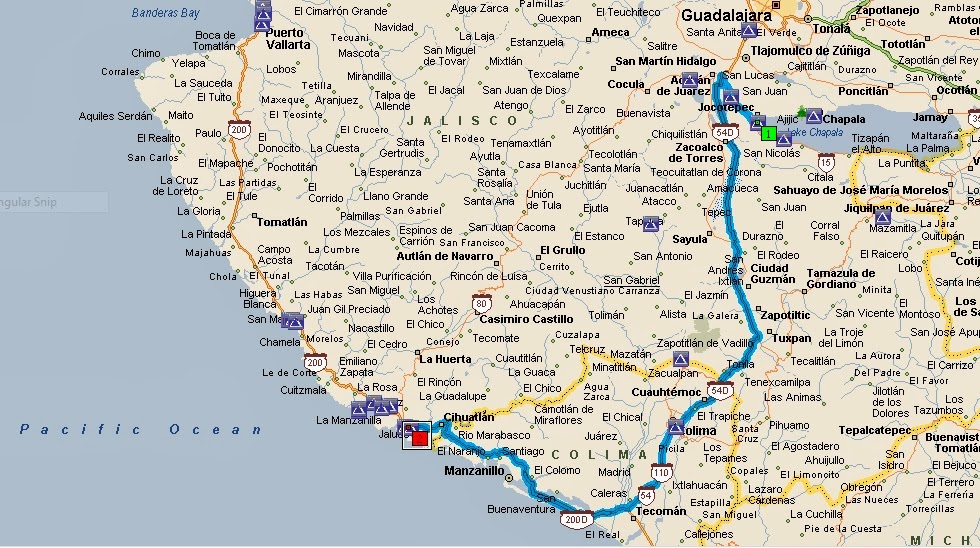 We are staying at Villa Xochipilli, which is a bed and breakfast that also has 4 RV spots. We entered through the double door gate to the left of the Jeep in the picture at the top of the page. We're the only RV at the moment so have the place to ourselves. It's about a 4 block walk to the beach from here. We are completely fenced and gated so Tilly can roam as she chooses - but she says it is too hot to stay out very long. 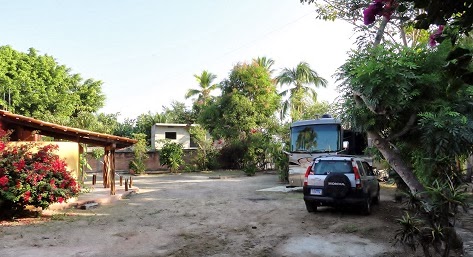 The B&B side of the villa has beautiful grounds and a nice pool. 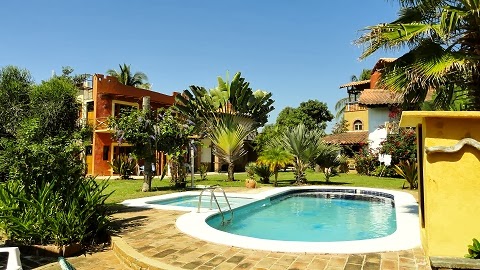 We're located on a lagoon that has a walkway right outside of our back door. Nice place for a walk but we have to beware of the crocodiles in the lagoon. Tilly is in front of a sign that warns us of the crocodillos and shows one of them with a dog in its mouth. You can see how afraid Tilly is by the way her ears are laid back. 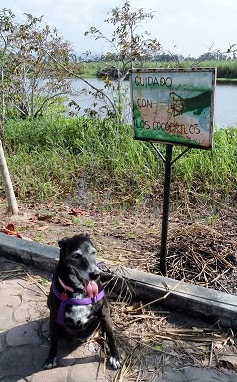 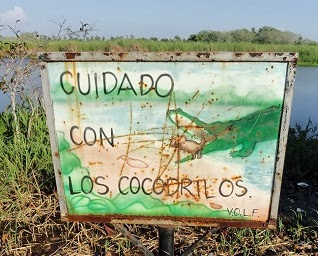 I'm sure she doesn't know the difference but it kind of creeps me out and I can't stop looking around for them while we're walking. It would probably be pretty rare to see one but you never know.

We've been to Melaque and the neighboring town of Barra de Navidad once before. I wrote about the number of coconut and banana trees in a previous blog and am still amazed by how many there are. Miles and miles of coconut palms with banana trees planted in between them. No wasted space. 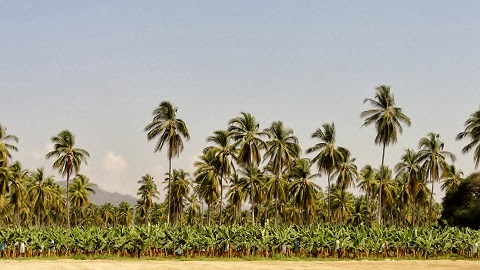 There are also ladrillo refactarios (what we call brick factories) in this area as there are in many areas of Mexico. The bricks are shaped by hand from clay, then stacked in a very specific way with firewood stuck in among the bricks to be fired. The entire stack is then sealed with mud on the outside to turn the whole thing into a large kiln.  The fuel for the fire in this area is coconut husks of course. We have been told that the most highly paid worker in a ladrillo refactario is the one who knows how to stack the bricks and monitor the temperature of the fire. This is one place we saw nearby where you can see the bricks being formed on the left, and being fired on the right.

Near the ladrillo were huge piles of coconut husks which we assume were used for fuel. 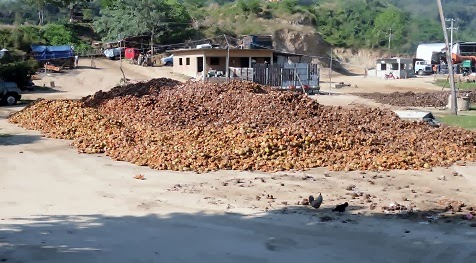 There was an Art Walk in the town of La Manzanilla (not to be confused with Manzanillo), on the beach about 10 miles north of us. We checked it out, had lunch, and walked around town a bit. I was particularly impressed with the gazebo in their jardin. The roof was a giant shell (man-made), shells lined the overhang and there were ocean related statues on the posts. Very nice. 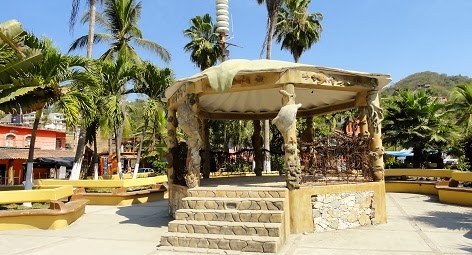 We'll do a bit more exploring before we head back to highlands.
Posted by Sue and Brian at 3:56 PM